Well the weather will sort of calm down, but not really, over the next few days. There are still some disturbances that will be coming through the region that may create snow scattered snows in parts of the area. One is coming tomorrow morning…another on Sunday…that might be more on the rain side…and then some next week too. So the pattern isn’t quiet per say but right now there are no big storms coming this way any time soon it appears.

There’s been a lot of other things I’ve wanted to get to you…but something crossed my desk yesterday that I wanted to share with you regarding how snow accumulations have changed over the last 50 or so years during the various seasons in the country and locally in the KC area that I want to write about today.

Today: Sunny and seasonable with highs in the upper 30s

Tonight: Fair skies with increasing clouds towards the morning hours. Lows in the 20s

Tomorrow: There may be some scattered snow showers around in the morning hours, especially on the north side of the Metro into northern MO. Amounts should be under 1″ though. Then mostly cloudy and seasonable with highs in the 35-40° range

Saturday: Partly cloudy and pleasant for February with highs in the 40s

Sunday: Showers develop in the AM then push away in the afternoon. Milder with highs in the mid>upper 40s.

The snow from yesterday was really a non factor in many areas north of 435/470 on the south side of the Metro. For the parade/celebration and everything connected to it…it wasn’t a big deal at all.

Areas that did receive snow did have some scattered slips and slides south of KC…then farther south where amounts were in excess of 2″ or so…and some with close to 4″+ down towards the Lakes and out into central MO it was a bigger issue.

The dry air that was chewing on the snow helped the KC area escape most issues. My forecast was only for a dusting to 2″ or so on the air for the 2 nights leading up to this…so I’m not overly disappointed in the outcome but I underestimated the dry air to some extent chewing on the incoming snow.

It was an “OK” forecast but not the greatest in my opinion. It snows…dusted the ground on the south side of KC…but really didn’t do much towards I-70 and certainly little to nothing impactful north of I-70. Grade: B- because I thought we’d have more road issues with the snow scenario for the I-70 corridor area towards the middle of the day.

It’s sort of been that type of winter.

We essentially missed a snowstorm by 75 miles or so… 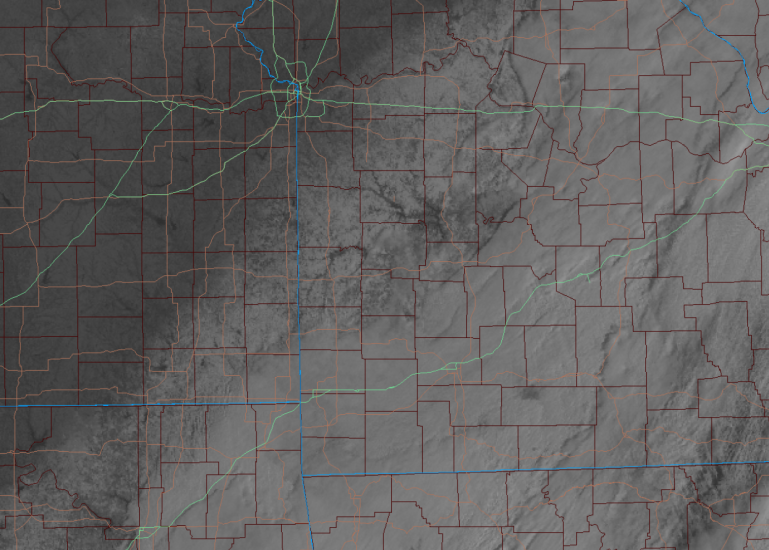 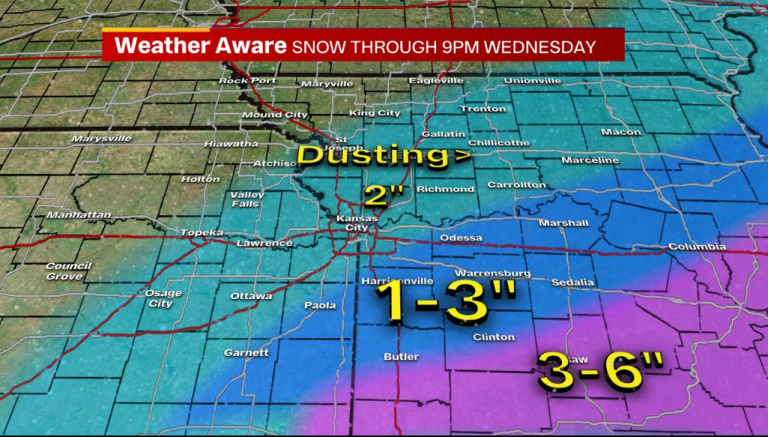 and reality…the south side of the Metro had generally 1/2″ or less per data today. There were 1-3″ reports and verifying pictures from Harrisonville>Warrensburg. So really IF I had said a dusting to 1″ for the Metro from I-35 eastbound…then the forecast wouldn’t been almost perfect. 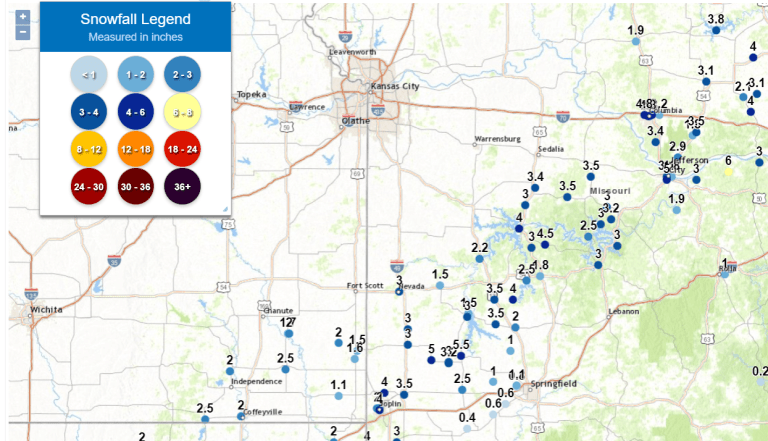 The folks from Climate Central have been crunching some data for snow totals in the country and observing how the trends in snow has changed over the course of 50 or so years. I wanted to show you that data nationally and locally.

For the fall season…which is September through November…there has been an overall decrease in snow for many parts of the country…that is represented by the red dots…the blue dots show an increase in snow amounts over the course of those 50 years or so. 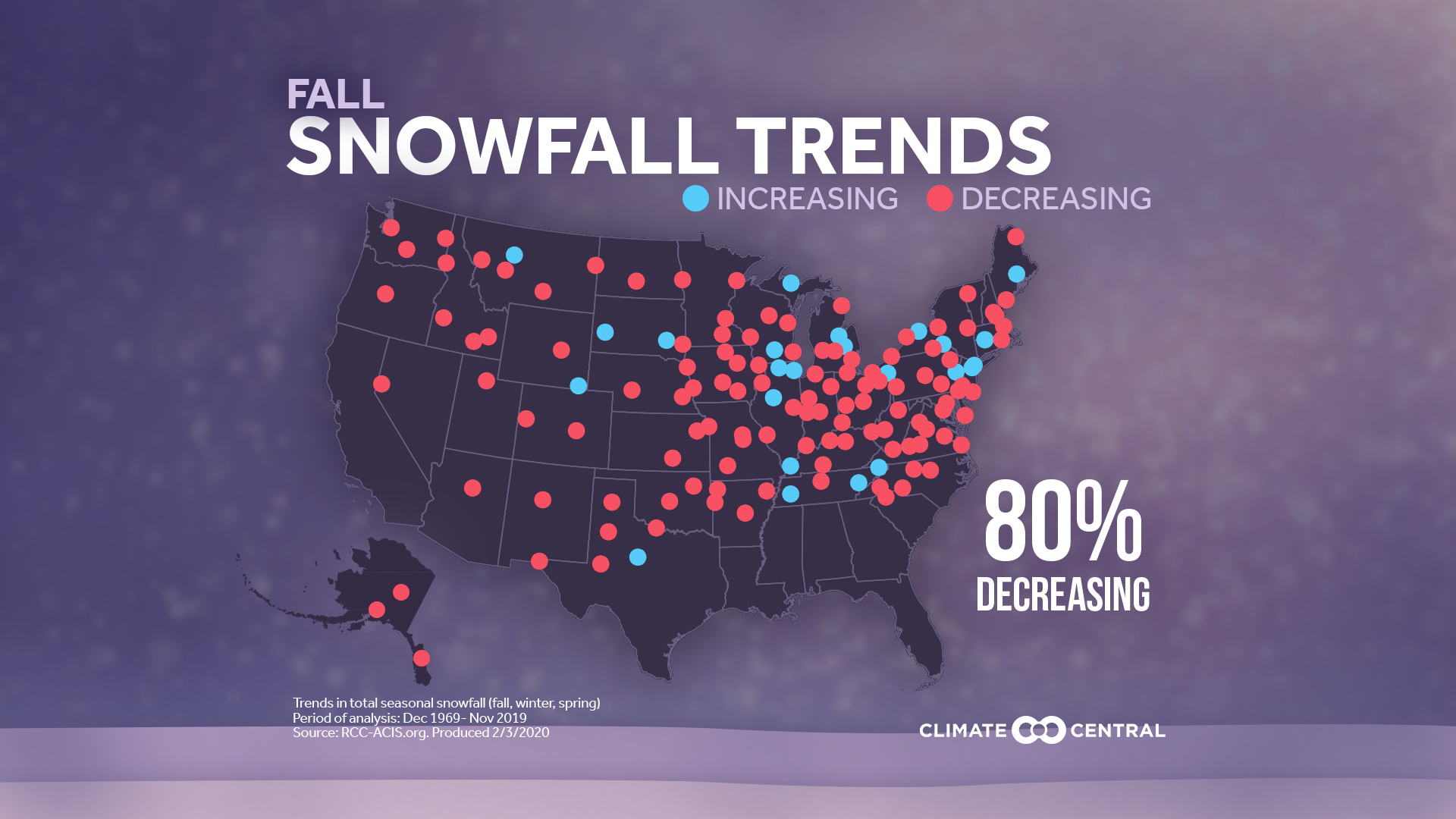 For the winter season…December through February…. 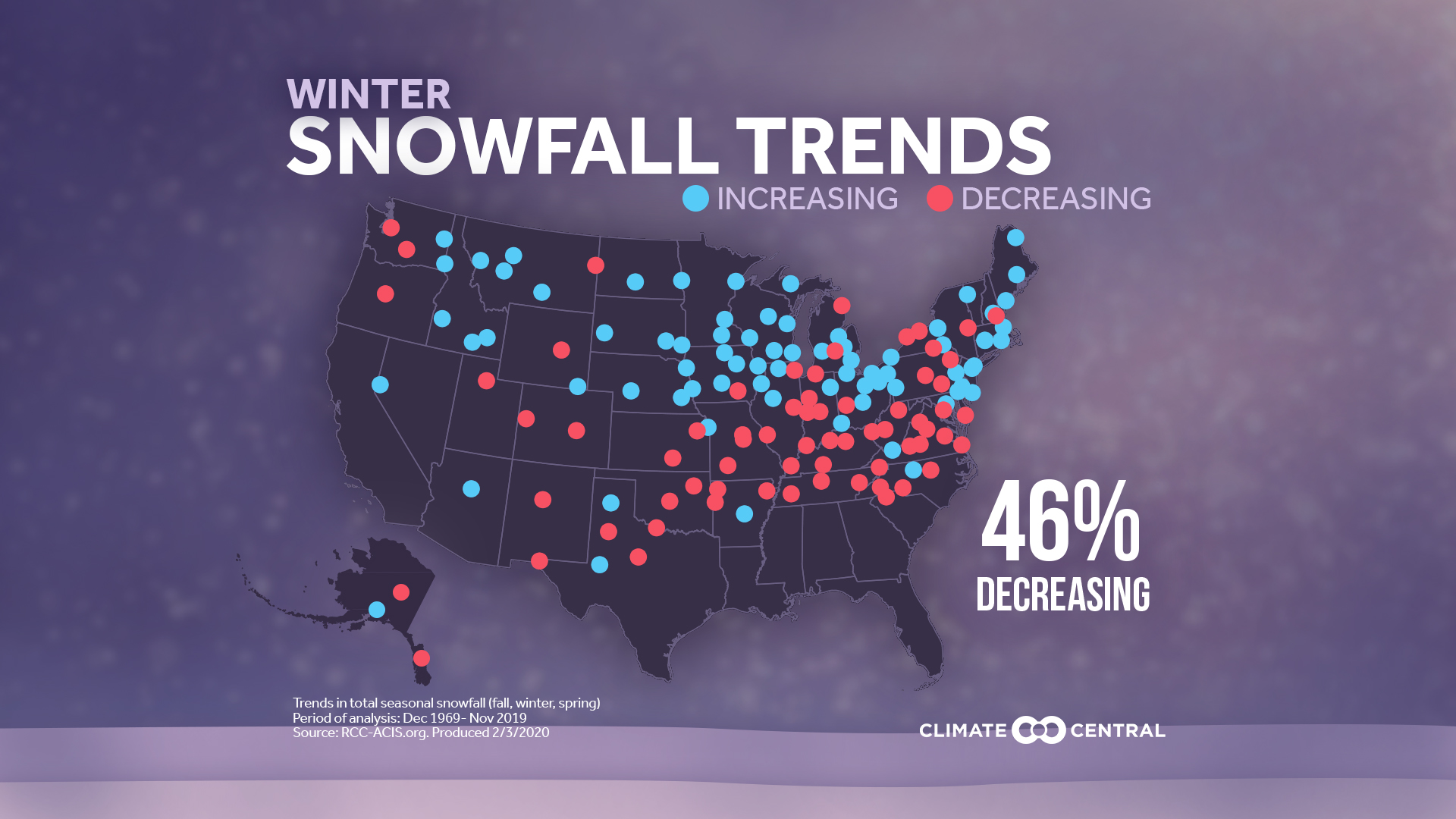 For the Spring season…after March 1st…an increase in snow amounts in the upper Midwest…and towards the east coast but an overall decrease elsewhere! 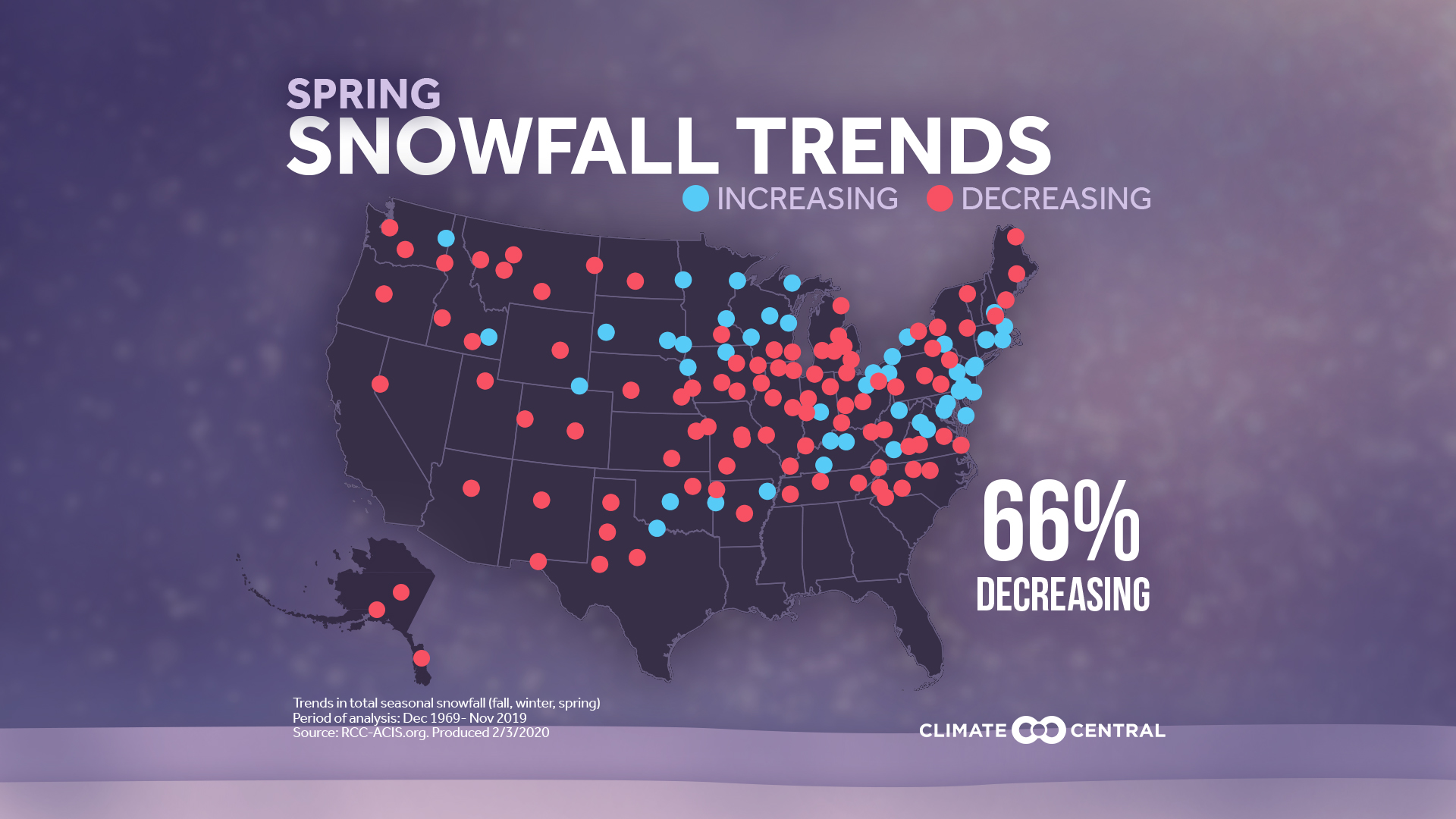 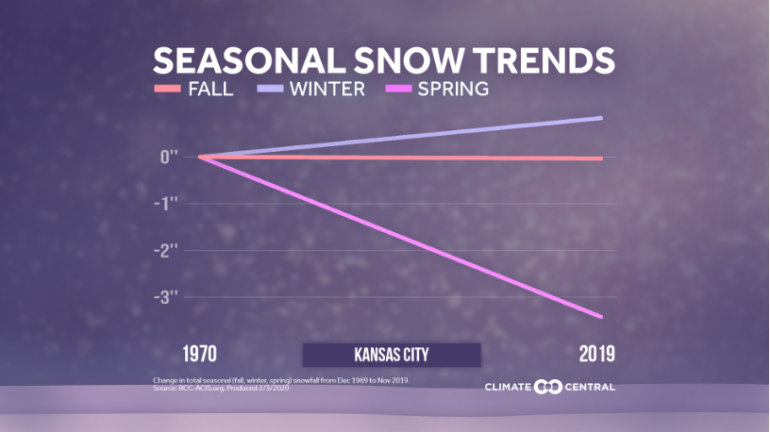 About the winter increase…here is some additional raw data…and this is where snow gets a bit more tricky…because KCI didn’t exist till late 1972 for weather data…we have to blend or “thread” together data from the previous location towards Downtown…and then KCI from ’72 onwards…there has been about a 8/10″ increase in the winter season snow.

In essence what this says is that the time period that we get snow is shrinking. This sort of makes sense for us in the changing climate that we’re seeing. We’ve definitely seen a warming trend in the “Spring” season…essentially from March onwards… 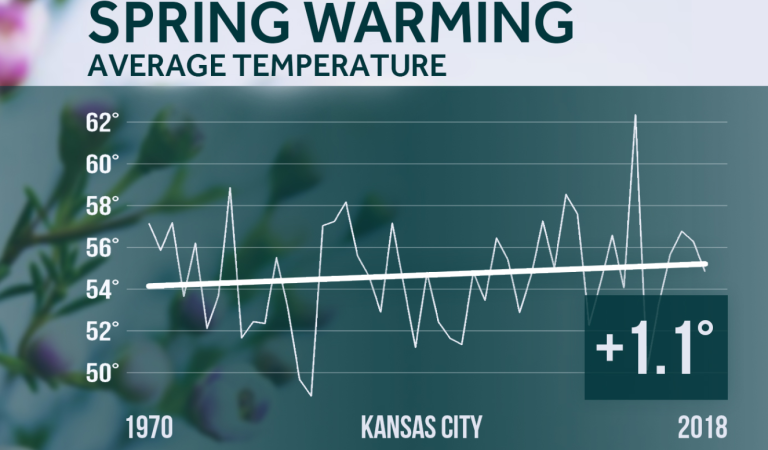 If we get more specific into the time period from 3/1-4/15…and look back at the data to 1970…there has been a 1.2° increase in the 30 year moving average temperature from 1970 to 2019 and while it may not sound like a lot when snow is sort of tough to come by in that time span…3/1 onwards…it’s an important increase.

Of other note…back to the nationwide scenarios for the various seasons…the increase in snow trends for the upper Midwest. When you get that and then you get additional spring rains…that leads to additional flooding events for the river basins etc.

That is a lot of moisture going into the river basins up there and in time flowing southwards.

And with the snowpack up towards the upper Midwest…there is still a lot of moisture that will, in time over the coming 2 months…enter the basin. 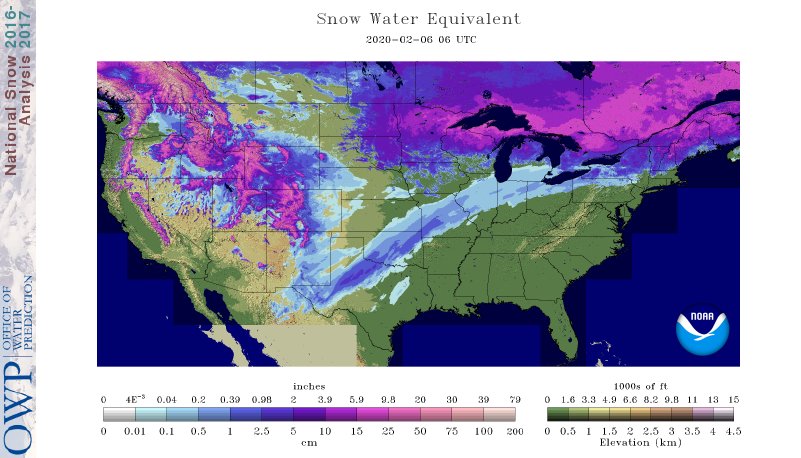 Compare the two images above…see where that water will drain in time?

So a lot to digest in today’s blog.

Our feature photo comes from Lauren Braton…taken a few days ago. 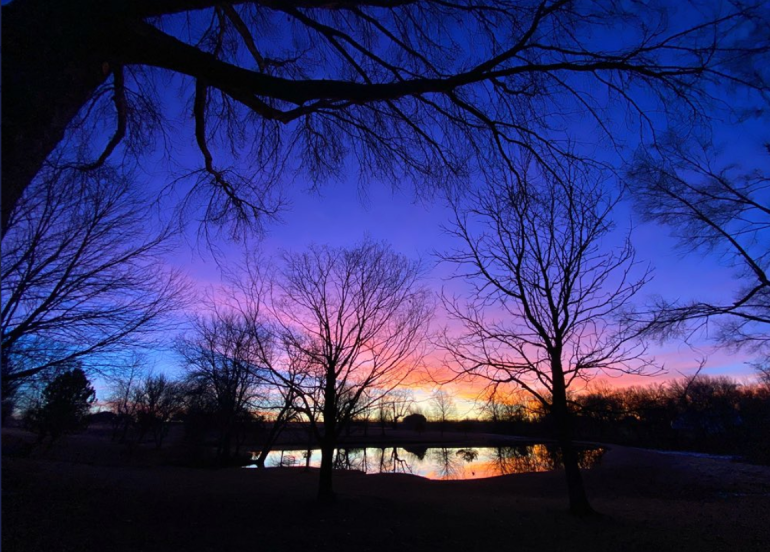