There is actually a lot of good news regarding the weather this week…some really nice days are coming and temperatures tomorrow and Wednesday should be very pleasant as summer slowly fades away in front of our eye. The holiday weekend may not be perfect…from a rain standpoint but temperatures look very doable as we head into early September

This afternoon: Mostly cloudy skies giving way to some sunshine. Highs near 80° or so. Storms are again possible from 5-8PM…heavier to the S/SE/SW of the KC Metro it appears right now. We’ll monitor how quickly we can recover from the AM storm complex that moved through

Tonight: Clearing out and cooler with lows near 60°

Tuesday: Nice day with highs near 80°

Wednesday: Nice as well…morning lows may dip into the 50s with afternoon highs again around 80° give or take.

So a somewhat unusual scenario setting up for today.

Typically late August isn’t exactly known for a lot of severe weather in these parts. Sometimes thunderstorms can produce microbursts (we saw that yesterday in Cass Co with a 75 mph wind gust) but much more than that is somewhat unusual

Typically by now the jet stream winds have weakened so much locally and lifted far north of the region that storms have a tough time organizing…today though is somewhat different as strong winds in the mid/upper levels of the atmosphere (by late August standards at least) will be developing on top of us and moving through the region later today.

That combined with a cold front that is entering the region later today…and some sort of warm front that will be nearby all create a somewhat “spring” set-up in late summer. 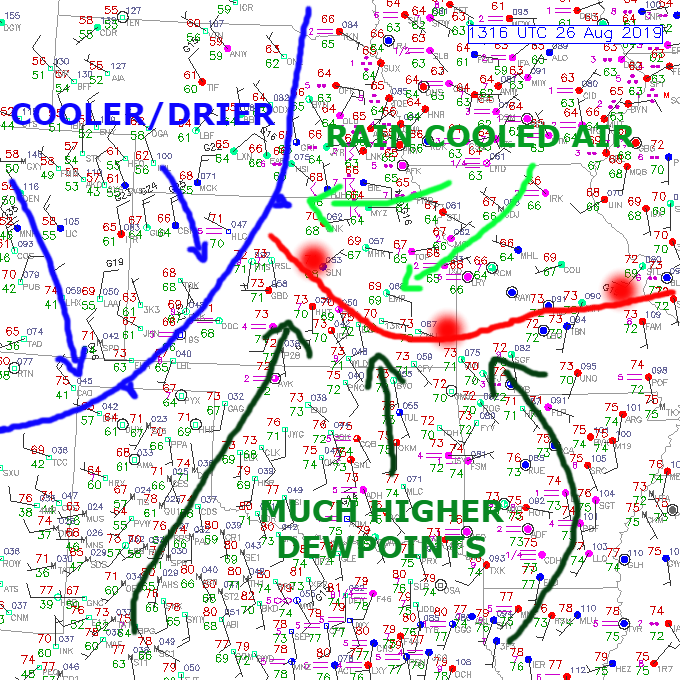 The morning surface map is reminiscent of May to some extent with a developing warm front to the south…beneath that front the dew points are well into the 70s and will go up from there today. There is a cold front in the western Plains that will sweep through the area this evening…and there is a remnant rain cooled air mass on top of the region from the bizarre system yesterday that dumped locally heavy rains on the area for most of the day at times. So several different air masses are going to be battling it out today and while I did not put in a “L” for low pressure..one will be developing nearby as well…which in the summer season with a lot of instability out there is a concern for enhancing low level rotation…which may create some stronger storms later today…especially on the MO side.

So a lot of things on the table today in an unusual late August set-up for stronger>severe storms.

As a result of this set-up plus the increasing winds above us this afternoon and evening helping to organize and strengthen the storms a bit more…parts of the region are under an enhanced risk of severe storms including, for now at least. most of the KC Metro area

With all this said..the timing of the storms is roughly from 4-8PM or so in the Metro before the activity pushes towards the east and southeast of KC. So you may still be able to get your evening activities in, especially from KC northwards at least. Let’s see IF that timing changes

Winds/hail and perhaps even a few tornadoes are all possible with this. The flooding risk is lower because of the progressive movement of the line of future storms…but in the area that had 2+” of rain…it won’t take much as there will be a lot of runoff.

Tornado risk is 5% which sounds small but in the way this is calculated…is actually a pretty decent step up. Another area to watch would be towards the SW of KC…Lawrence towards  Garnett towards Pleasanton…because the AM activity moving through may set down a boundary down towards the area that could enhance low level rotation…

12:30 Update…these criteria maps above may need to be adjusted farther south as well based on the AM activity…

Here is a look at local radar…there are a lot of things happening already this morning including the storms coming into the area before lunch…it will be interesting to see how far south these storms go…because they will tend to weaken as they move southbound but at the same time that rain cooled air will firm-up that warm-front to the south and slow the northwards progression of it for a few hours…so how that comes into play remains to be seen. They will throw out an outflow boundary south as well…further complicating the situation this afternoon. As a matter of fact this complex this morning may throw the whole day off in the end…with it driving more SE than east the atmosphere may become more of a chaotic mess because of whats happening out there before noon.

There are several other tornado parameters that I look at…that are pinging our area later this afternoon as well so let’s keep WEATHER AWARE later today especially.

One last note…this isn’t quite a slam dunk event…this morning complex of storms could mess up the atmosphere from KC northwards…it’s just something to watch as well. What I wonder though is the unseasonable-ness of this whole scenario plus it being late summer and odds favor a quicker recovery of the atmosphere compared to an April/May set-up.

So we’ll just be watching things vigilantly for the afternoon especially. 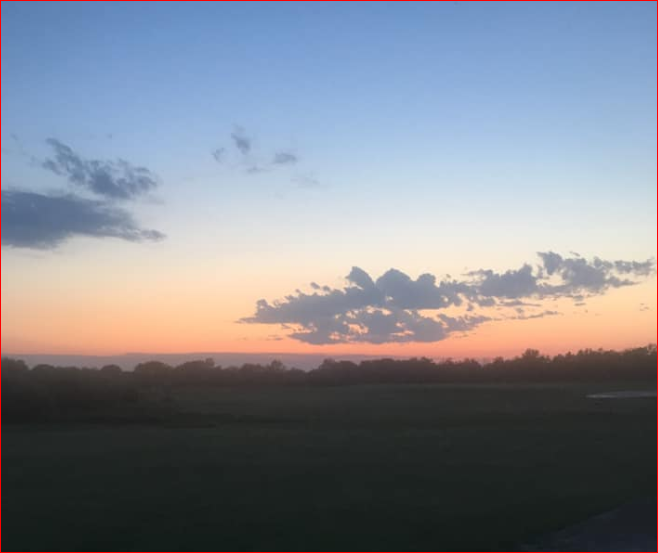 Missouri state treasurer giving away $100,000 in scholarships in 100 days