Good morning…it’s a fascinating weather pattern setting up in late October around the region and the Plains as a whole. There were thundersnows yesterday in the TX and OK Panhandle region…in October…that timing aspect is pretty rare I’d say. Colder air will be diving southwards again later in the weekend and next week will not be pleasantly mild by any stretch of the imagination.

As we get into the colder air…disturbances will be coming up from the SW…where they end up going will determine what sort of weather we have to deal with aside from the cold temperatures. Can it snow…yes…can it rain…yes…can it sleet…yes. Will it be cold…absolutely.

Don’t put too much faith in snow maps at this point showing accumulations…I’ll resist that aspect of things for one more day…but to me at least IF there is going to be something wintry happen in the Metro…the better timing on that would be later Wednesday into early Thursday (next week). Again almost 5-6 days away…so let’s not get too worked up about this (yet).

Today: Decreasing clouds and milder than yesterday with highs in the mid 50s. We also get a nice wind break too.

Tonight: Fair skies and chilly with lows in the 30s but clouds will again move north into the area early tomorrow

Saturday: Variable clouds…with some showers on the MO side farther east and SE of KC…there may be some sprinkles locally though. Highs in the mid 50s

Sunday: Breezy and OK…highs in the mid 50s but chillier for the game Sunday night.

1st let’s start with this tweet thread I cranked out yesterday.

Thread coming about the forecast…
Tremendous model differences for #Halloween continue…this is just a look at temperatures…EURO (L) vs GFS (R). I'm on the colder train (altho not as drastic as EURO) 1/ pic.twitter.com/qg8DUZ48kU

Since I sent out that thread…click on the tweet itself to see my other thoughts…not a lot has changed really.

Let’s start with next THU (Halloween) and show you the contrast in temperatures, if nothing else. 1st the GFS… 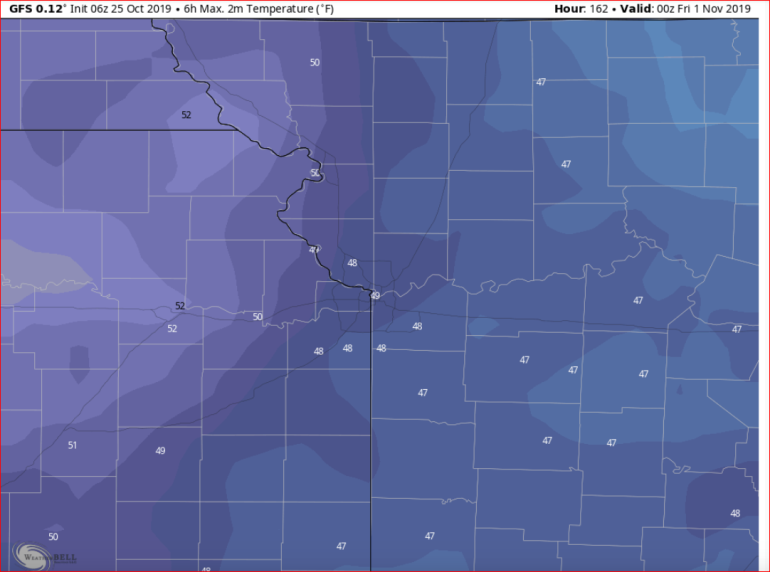 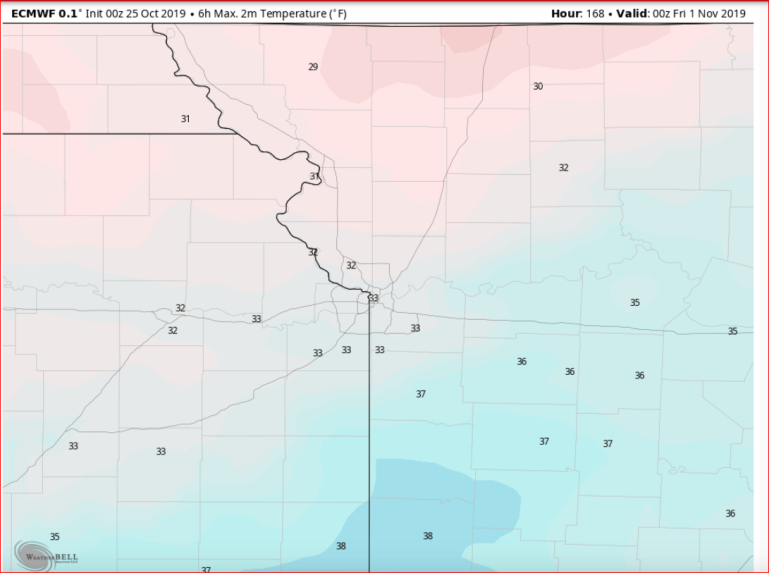 So boom…15+° differences for Halloween.

In reality…there are several things to pay attention too over the next several days (and beyond). 1) is the plunge of the table-setter cold air…that is moving into the area Monday. As it moves in though a weak and fast moving disturbance will keep the coldest air north of here as it moves northeastwards through northern MO…once that zips by Monday night then we should see colder air dump southwards on Tuesday.  2) A series of somewhat disorganized disturbances will zip towards the NE over the cooler/colder air and that should create at least some rain…with the potential for some snow across far northern MO…I don’t think we’re set up for snow locally in KC out of item #2.

Item #3 though is what needs to be watched…it’s a stronger wave that would come towards the area later Wednesday into Wednesday into early Thursday (Halloween).

That would come into the cold air in place…and develop wintry precipitation in  or near and north of the area. That would be the main thing to watch…and while the data off the EURO model today is VERY suggestive of accumulating snow locally on Wednesday into Wednesday night…if anything more suggestive today than yesterday…it’s still really too early to get revved up about it.

Now that does NOT mean it can’t happen…it’s actually a really favorable set-up for snow…taken at face value…but rarely is the model right from 5 days out…with precise locations of things especially the precipitation side of things. This is highlighted this week in the EURO forecast for tomorrow. From MON>WED it was nailing our area with a rainy day tomorrow…the whole area…well yesterday it started to push the rain farther and farther east and cut the amounts down considerably…something like that may well happen again as we get closer to the middle of the week next week.

This aspect of things though I do agree with…the cold…maybe not record breaking cold locally…although we’ll be watching for record cold highs later next week…but it will be cold.

Here is a look at the anomalies for TUE…WED…THU. 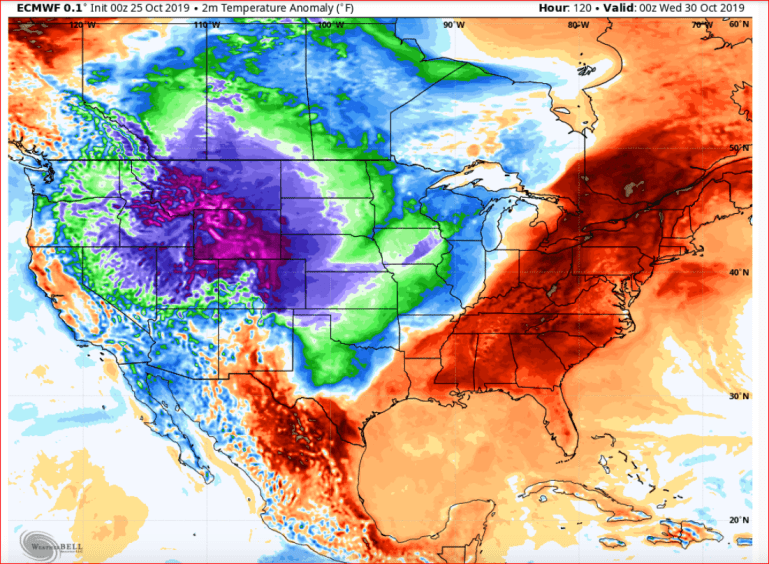 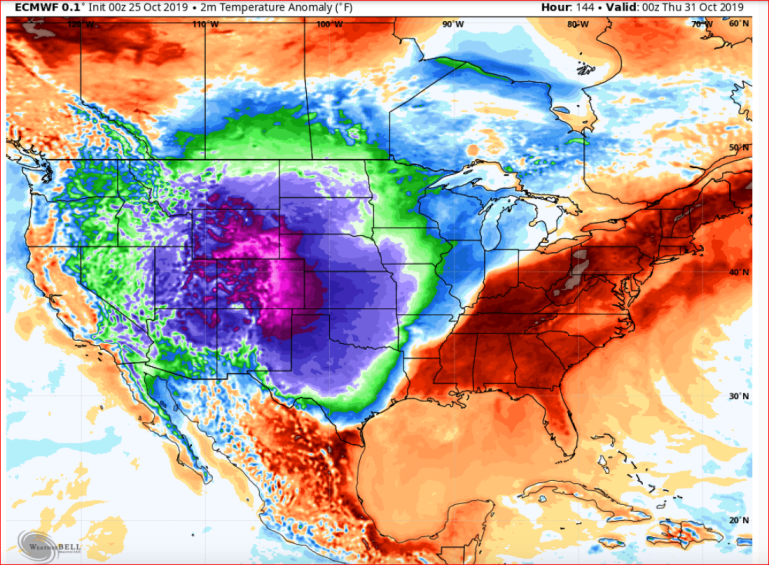 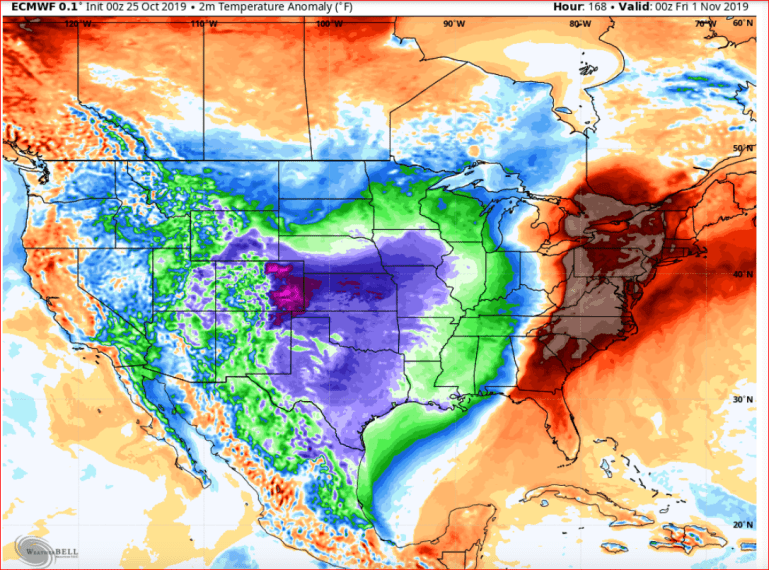 NOT pleasant…and regardless of the snow risk WED>THU…it will be well below average and potentially in the mid 30s for trick or treater’s on Thursday night.

Also of note is an increasing chance of a hard freeze next Friday morning…a week from today So IF you have agricultural interests pay attention to that aspect as well.

By the way…speaking of snow…heading west? Here they go again…Colorado for the snow win this month…

A significant storm is expected across Colorado Saturday night through Monday. Here is our current thinking on snowfall accumulations. Expect travel impacts during the entire day on Sunday and Monday morning. #COwx pic.twitter.com/lm4iAkxEBv

A lot to be watched this weekend and next week…I’d like to take a blog day off tomorrow but the data may dictate otherwise…I’m working on Sunday night so there will be a blog Sunday afternoon. 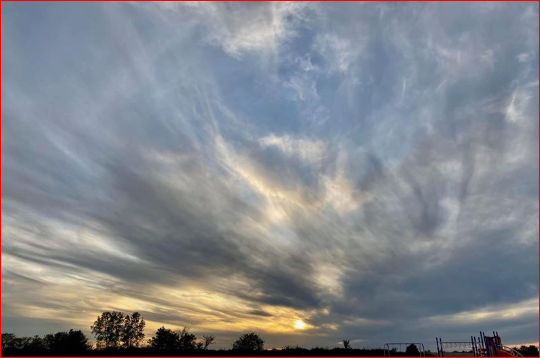