After a pretty darn nice weekend around the area with warm temperatures…things this week are going to be trending below average for temperatures. We’re starting that off with lows this morning in the mid 50s…and highs today will be delightful…as a matter of fact the A/C’s will not be working overly hard this week. Temperatures will be mostly below average for the next 5-7 days…in time though we will heat back up.

As far as ran goes…this won’t be a perfectly dry pattern…various disturbances will be coming towards us from the northwest and west depending on the flow aloft…and that means rain chances…maybe not tons of rain but at least some rain every so often.

Interestingly enough…despite the ongoing flooding out there…the grass is actually going to need some moisture with this regime. The dry air and high sun angle are a combination that sucks moisture out of the top soil and that means that the top few inches of the soils will be drying out.

Today: Mostly sunny and pleasant with highs well into the 70s

Tonight: Fair and cool with lows in the low>mid 50s

Tuesday: Nice with highs well into the 70s. Evening and overnight showers possible

Wednesday: Morning showers are possible with highs only 70-75°

One of the things I noticed about my trip to the lake over the last few days was the water…it’s everywhere. Areas that I’ve never seen flooded before are flooded. Truman Lake is crazy high…submerging trees in areas near bridges…and that water isn’t going anywhere for awhile. There was also a lot of debris (tree limps) in the water as well…overall somewhat dangerous boating conditions IF you’re not paying attention.

Truman Lake isn’t alone…numerous lakes around the region are either closed off or being hampered by ongoing flooding.

It’s going to be, at best a slow recovery for many of the lakes and communities affected by this. Farmers are still being affected…some trying now for a 2nd corn planting but in some cases the fields won’t cooperate and with many areas still flooded…it won’t be a good summer for many of the farmers despite better commodity prices.

You can see the extent of the flooding by looking at the satellite pictures and comparing them from one year to the other.

Now from this past Saturday…

Look carefully at the MO River region both east of KC and up towards NW MO as well…also look towards the Lakes of the Ozarks region and notice how much more apparent the lake/river waters are…that is just a small sample of the flooding that’s out there.

Now down towards the Lakes…last year…

A LOT of water out there…

This week will feature temperatures that should be mostly below average…certainly at night. As a matter of fact the record low for Thursday AM is 47° set back in 1985…we’re going to be in that neighborhood to start the day. Here are the coldest lows for the 13th. Tying a record isn’t out of the question in my mind at least…or even getting down to 45°. 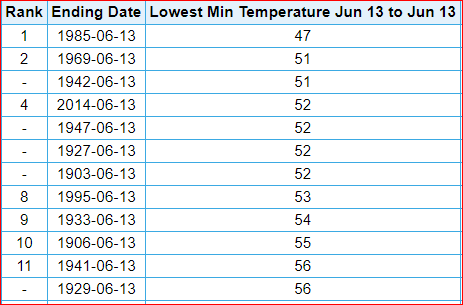 We’re now into the time where the average low/high is 62°/82°. It may be a struggle to get to the highs this week…and the lows will certainly be cooler.

We’ve also yet to hit 90° and I don’t see that happening this week either.

Not totally unusual but in the last 33 years…there have been 13 or so that have had later 1st 90° or higher days.

Let’s see if that needs revisiting in a couple of more weeks or so. The only day that could challenge this would be this coming Saturday IF there is max heating potential ahead of another front…but we’ll see about that.

The longer range forecasts show this for days 8-14…

From a moisture standpoint…we’ll need to watch for various disturbances coming in from the NW and the west. This type of flow typically can create overnight complexes of storms in the western Plains…then it’s a matter of how long they can survive as the get closer to us. Clouds will be an issue to the forecast as well heading through the next 10+ days and that in itself will create some temperature headaches out there for forecasting. Especially IF the clouds come in during the daytime.

We will get rain…it won’t be perfectly dry…and we’re still in the wettest time of the year. We average over 1″ of rain/week in June. Here is the EURO thoughts through the 24th or so. 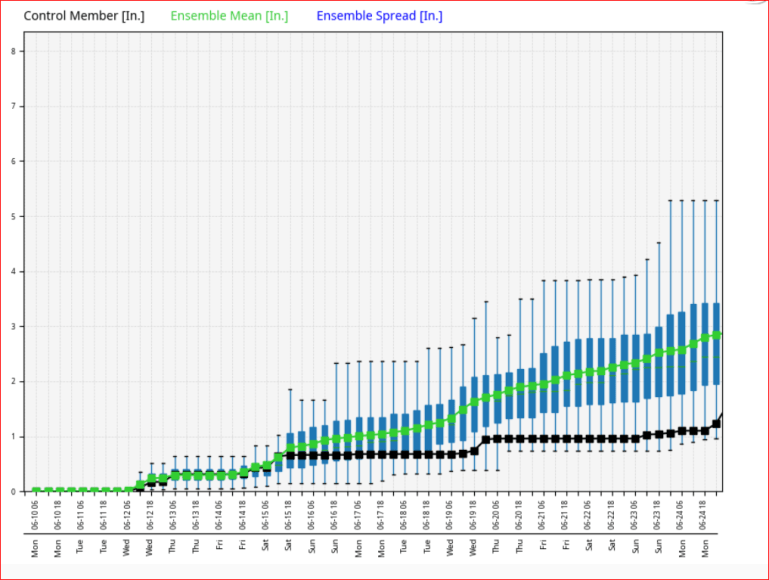 and the GFS model… 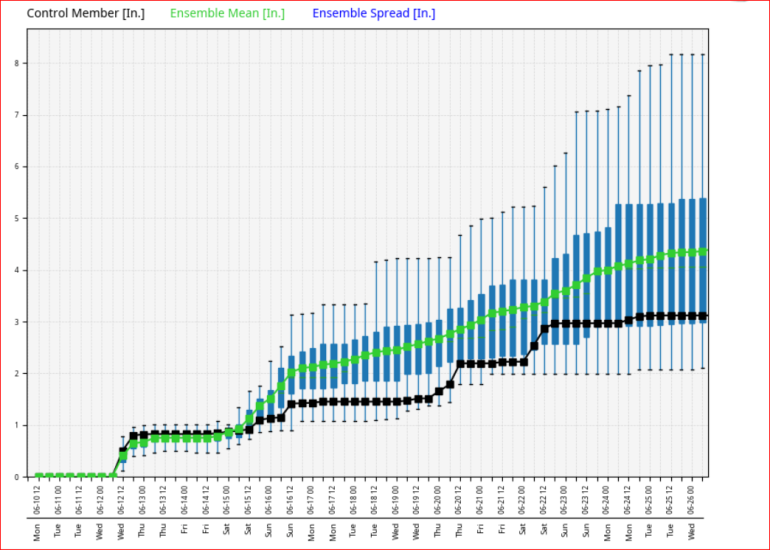 The GFS is almost ALWAYS wetter all the time…

So IF you split the difference…it’s about average moisture through the 24th or so… meaning close to 3″ possible. We’ll see how that plays out.

I think the “cooler” weather with a break in the humidity values will be the bigger issue out of all this.

Our feature photo comes from ‎Chris Stephenson‎  while he was flying home the other day…wowza! 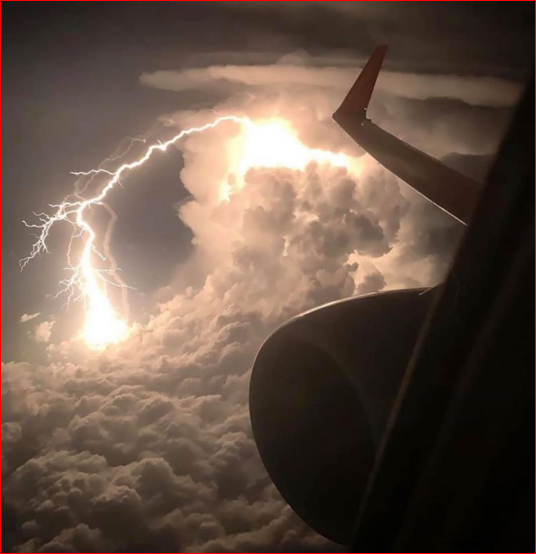 It's cold out there this morning as we're still under a Freeze Warning until 9 AM. Temperatures are starting out this weekend near 30 degrees, and wind chills are in the low 20s. Luckily, this afternoon will be much warmer than the raw day yesterday as highs climb back to 50. Clouds will be moving out today, meaning more sunshine for the second half of the day. Highs quickly rebound…

After some brief rain and thunderstorms this morning, Thursday turned out to be a pretty nice day. Temperatures are still pretty warm Thursday evening, but our temperatures just a few miles west are significantly different. A very strong spring cold front will move through overnight and drop our temperatures some 35-40 degrees in many locations! Just after midnight, our temperatures around the metro and further west are all 40 degrees…