Well the set-up played out and the tornadic storms formed…and unlike what happened in OK on Monday…this time the bigger tornadoes hit more populated areas…including the capital of MO. Several deaths have been reported in SW MO…as a string of supercell thunderstorms ravaged the southern part of the viewing area and points south and east. Tornadoes…some hail (although mostly not overly large) and again some flooding rains were the main issues.

The storms formed in the late afternoon hours…and while the focus was on the potential of nastier storms to the south all along…the Metro did get a bit more rain. What was fascinating to see play out though…was how the storms/radar echoes looked as they were developing closer to KC…they were virtually all “spinning”. Numerous hook type radar returns were noted all over the place but thankfully there was “something” that was preventing tornadoes from forming. It was quite amazing to see really…that one “something” was a boundary that was south of the Metro and moving SEwards. All the storms that were north of that boundary, even though they were rotating, couldn’t produce an actual tornado.

So what was that boundary?

Today: Mostly cloudy but overall dry for KC. Highs in the 70-75° range

Tonight: A chance of thunderstorms…this is not set in stone though and will depend on several factors playing out in KS later today and how whatever forms out there comes eastbound into some cooler and more stable air. Lows in 60s as moisture returns from the south in the form of higher dew points

Friday: The main risk of storms appears to be mostly in the PM…warm and humid in the PM with highs closer to 80°. Watching for heavy storms later in the day into Friday night with some heavy rains possible

Holiday weekend: It won’t be awful BUT there will be periodic rain/storm chances and the potential of severe weather as well. What happens one day will dictate the other day so we can’t get real specific with timing at this point. Highs near 80 with lows in the 60s. Its possible there is a dry Memorial Day…but that is iffy right now.

So about that boundary…when looking at radar yesterday I was struck by 1) the rotational characteristics of most of the storms and showers that were appearing close to the KC area…and 2) this thin little line that we refer to as a boundary that was moving towards the SE…and was moving SE of KC. Storms that were north of that boundary were rotating but while a casual look at the radar would say…wow…those could be tornadoes…the storms close by never produced (thankfully)

Michelle was out chasing the storms down towards Bates Co…and we were trying to steer her away from that “boundary” because it appeared to me that storms north of that line weren’t going to produce tornadoes…and they didn’t.

The boundary though was slower in moving in central MO towards Saline Co…and sure enough when storms formed to the east and south of the boundary…or when storms moved from the more stable side of the boundary to the “other” side…their tornadic potential started to increase…and we saw a touchdown (or two) in Saline Co…north of Marshall, MO.

So about that boundary…

I believe it was a discontinuity of dew points…higher moisture air butted up again lower moisture air…in other words…lower dew points clashing with higher dew points. The storms, even in the lower dew point air “elevated”. They were ingesting the unstable air ABOVE that boundary towards the north and west of the boundary. I noticed in Michelle’s chase video that the cloud bases seemed rather high with the storms…that’s a clue.

Here is a map from 5PM…just as the storms were starting to get together closest to KC especially…the temperatures are in red and the dew points are in green. I’ve drawn in the lines of equal dew points (fancy word time:  isodrosotherms). 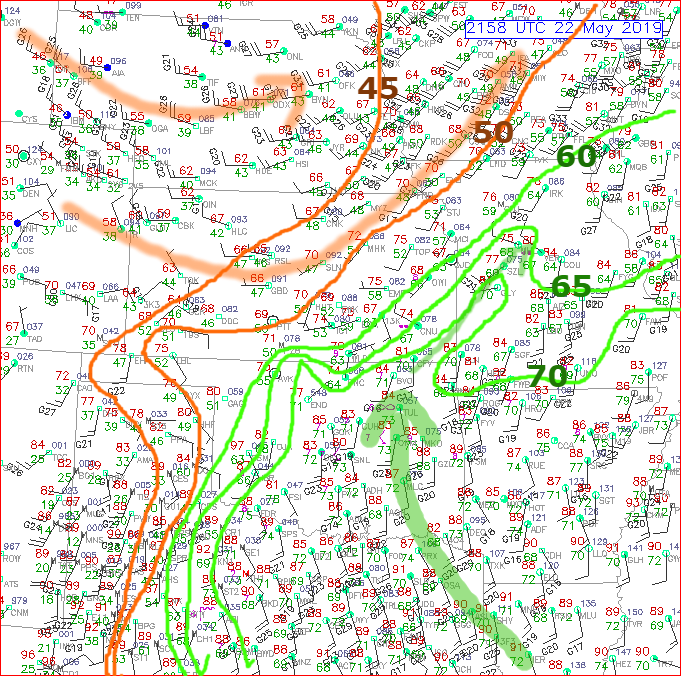 Notice what’s happening in our area…note how the dew points range from the upper 50s towards KCI and the 70° dew points towards Sedalia and Clinton. 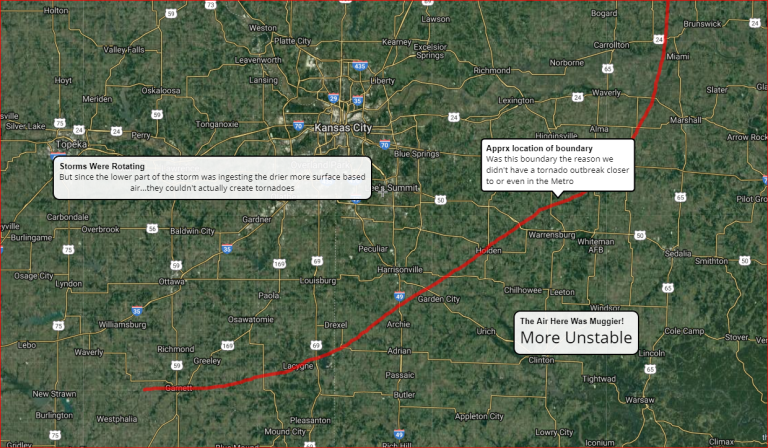 The “shear” above the surface was strong…so that’s why the storms were rotating all over the place…the shear around KC was not as strong but still strong enough to get things “spinning”…that boundary though was the key to keeping us safe.

Why am I detailing this? Well IF that boundary was 50-75 miles farther north…the KC Metro would’ve had a tornado outbreak…I’m almost convinced about that. There were rotating storms in JOCO…JACO…and a few other counties nearby.

In the end..this was the result though… 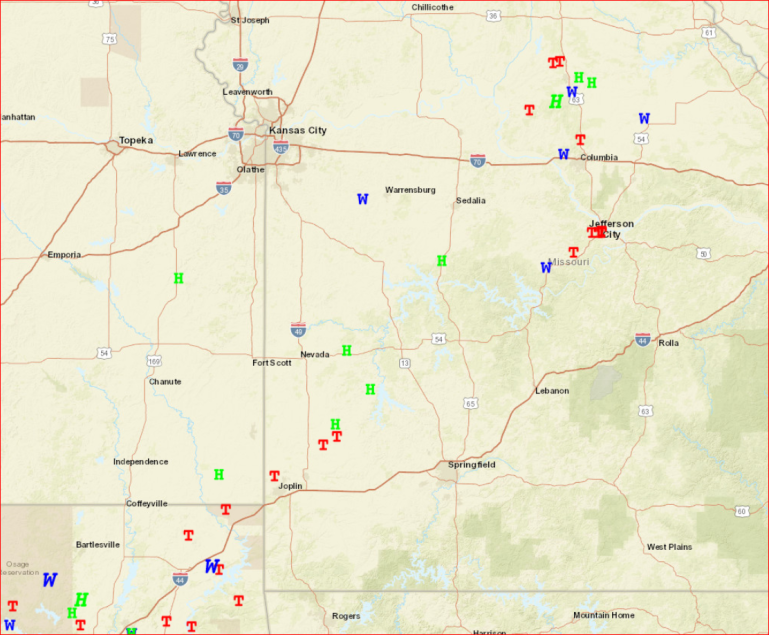 Note the lack of severe weather in the region.

@ReedTimmerAccu Carl junction just missed us by about 3 blocks. pic.twitter.com/3r4anpW5Xc

#GOESEast got a close-up view of Wednesday night's severe weather outbreak in Missouri. More than two dozen tornadoes were reported across Missouri and Oklahoma, including several that prompted #tornado emergencies. More: https://t.co/jVODsQPMxC pic.twitter.com/Bkcq4UvYhr 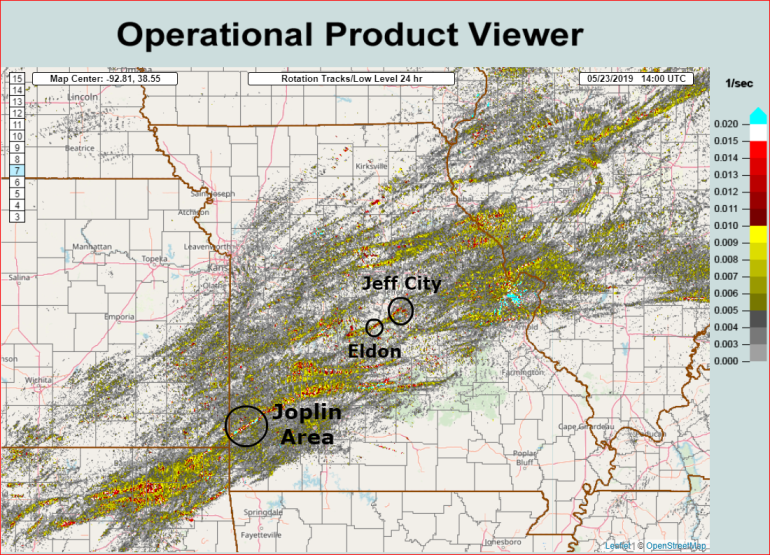 So I went totally off on a tangent today…I’ve got a note to the weather service in Pleasant Hill about that boundary thing to see if they agree with my assessment or not…I’ll let you know….and they just got back to me…

“Hey Joe, I think it was an instability gradient driven by both the moisture return and the time that clearing occurred from the stratus earlier in the day. The northern convergent line that went into the metro and didn’t really do anything seemed like the actual moisture gradient/ pseudo warm front, and the line where storms really went from Joplin up through Jeff city was the instability axis…. then in between where we saw that weak boundary on radar and towering cu on satellite was the instability gradient? I also think that’s why it wasn’t a sharp delineation, and why we could get tornadogenesis on both sides…. it was more a boundary “zone” than a true boundary.”

The feature photo of the day is from Bob Youngs down towards Warsaw, MO…showing a funnel for sure and a possible tornado down in Benton Co. 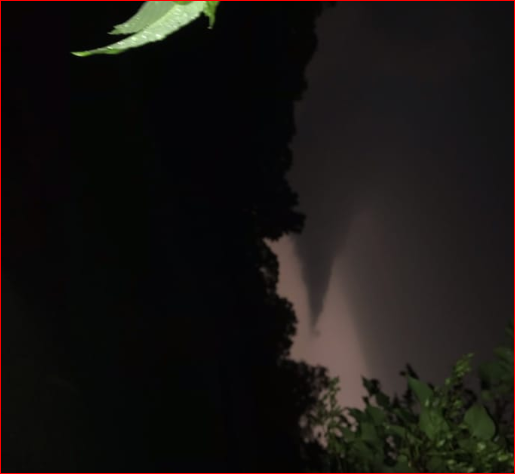