Good Wednesday to you…a cold front came through the KC region last night…the cooler and drier air though was lagging a bit behind the front but now we’re seeing the dew points drop off nicely…that sets the stage for a phenomenal day today and a great night tonight. A quick and brief heat and humidity surge will move in tomorrow afternoon before again getting shoved southwards on Friday. With all these transitions rain is going to be hard to come by for awhile too.

Dorian continues to move off the east coast of Florida…and is heading towards or near the coastal area of the Carolinas towards the end of the week. This is still a big ticket item for the SE part of the country despite the strongest winds now weakened. The surge though from the storm that’s been out in the ocean for days now is still going to be an issue for that part of the country, especially during higher tides.

Today: Mostly sunny…cooler and drier with highs near 80°

Tonight: Clear and pleasant with lows closer to 60° (50s on the MO side east of KC)

Thursday: A return of heat and humidity with highs approaching 90° and heat index values 95-100°

Friday: Not as hot or humid in the afternoon with temperatures in the mid 80s

Going to keep this blog a bit shorter today since I’ve written thousands of words about the weather over the last 10 days or so regarding Dorian especially…which is still out there so let’s start with that.

The videos from the Bahamas are coming in more and more now and to me at least it looks like this awful combination of the devastating tsunami from Indonesia from 2004…to a massive flood event (the Bahamas may have had 20-40″ of rain)…to the video of looks like what appears to be an EF4 type tornado damage…it appears to be all rolled up into one…and the results are horrifying for a beautiful part of the world that may never recover from what happened over the last few days.

Dorian is still a category 2 hurricane…

Storm winds may approach hurricane strength near the coastal areas.

and the rain will be intense and create some flooding with the storm surge combination. Dorian will be moving along though so the threat of a long term flooding (from the rain) scenario isn’t going to happen this time.

There still though will be flooding along the coastal areas especially.

Here's the latest #Dorian storm surge forecast from this morning. The water could reach the following heights above ground somewhere in the indicated areas if the peak surge occurs at the time of high tide. For more details see https://t.co/tW4KeFW0gB pic.twitter.com/FnozVJ0eqh

This is actually one of several storms…Fernand formed yesterday in the far western Gulf of Mexico…and Gabrielle is a non-threatening storm way out in the Atlantic.

Typically this is the busiest time for the tropics…and that is certainly the case now.

Back home into KC…

The cooler and drier air is now moving into the area…dew points are down into the upper 50s compared to the mid 70s from yesterday…big difference. Here is the 8AM map.

We should remain dry into Saturday…

Sunday another chance of rain will develop…especially during the 1st part of the day…we’ll need some moisture by then since this will be a dry week…right now though it’s not set in stone though.

Northern MO has the best chance…from there we’ll see how far south it can penetrate…but it’s doable, especially this season when we seem to get these types of rains more often.

IF we miss out though…there will be chances redeveloping later next week especially…overall though temperatures look to be near to above average during the afternoons through the end of next week. 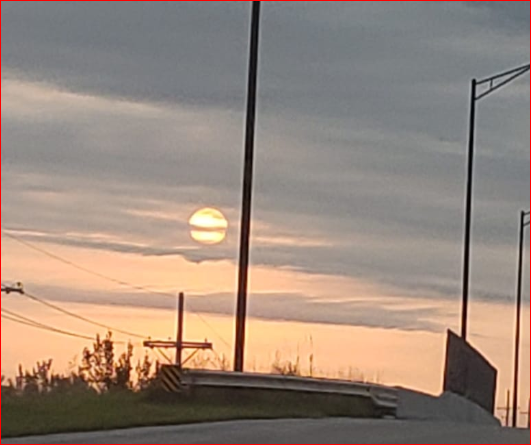