Now the title of the blog is “complicated”. For some a “snowstorm” is 1″ of snow…for others the standards are higher…and for me the standards are a bit higher as well. In my own very(!) subjective opinion a snowstorm should be 3″ or more for us in KC…again there is no definitive definition…for the NWS it might be more closely tied to about 6″…for the deep south 1″ would be a rare “snowstorm”

So with all that said…there remain many issues heading into Sunday and Monday. The model data, led by the GFS for the most part is picking up on the better snows on Sunday and now less so on Monday. The GFS model was very bullish for both days really. The EURO was most bullish for later Sunday night into Monday…and the NAM is now coming in to the time frame with what appears to be majority snows on Sunday into Sunday night with little snow on Monday.

This afternoon: Variable clouds and mild with highs in the 50-55° range. There may be a few sprinkles after lunch…

Tonight: A few rain showers possible…not overly cold through the evening then colder towards daybreak. Whatever we are at 12AM will likely be the high for Saturday…Saturday afternoon will be 30-35°

Sunday: Snow develops…after kickoff. Mostly light but some slick roads are increasingly likely either after the game or towards evening. Highs only in the 20s

Monday: Morning snow still possible and then variable clouds and cold with highs in the 20s

Still not a lot of clarity aside from the cold weather and the snow potential…which is increasing…that I’m pretty confident about BUT the timing of the onset of snow on Sunday still bothers me and the trend in the data for the snow to end quicker bothers me too…because that’s a decent wave coming our way later Monday that the models may not be resolving well at all.

Issues continue regarding the onset of the snow on Sunday and implications for the game and especially for the drive home from the game too. A little snow goes a long way in making things slick around these parts…and that is a big concern of mine after 3PM Sunday.

Radar this late morning shows a weak little wave coming out of the Plains…it appears most of this is not reaching the ground but there may be a few sprinkles out there somewhere.

There is another wave towards the western parts of Nebraska that will be coming our way overnight…that too may create some rain showers…maybe a wintry mix in some areas…here is the HRRR model showing the possibility and location.

That gets us through today and tonight. 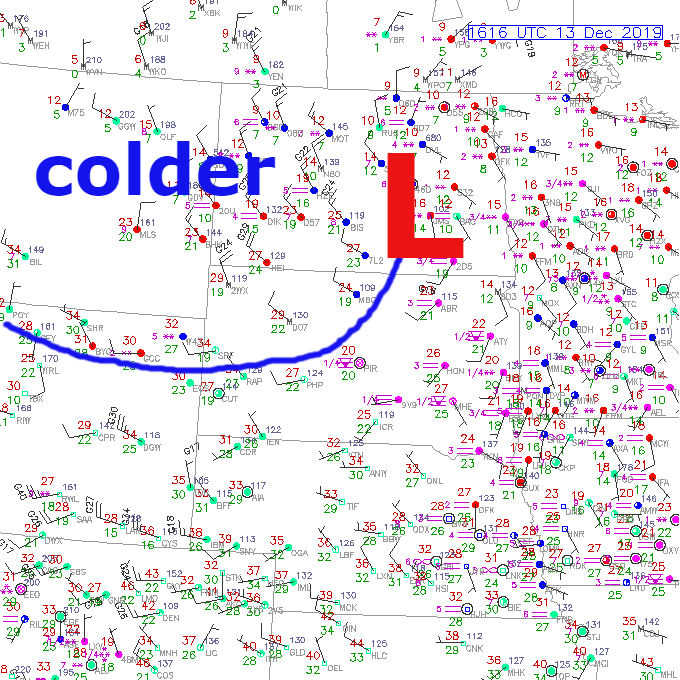 The temperatures are in RED…

We should get a good push of cold air with wind after 12AM…then the push will relax somewhat tomorrow afternoon so we may recover a few degrees.

So we will be cold enough on Sunday for whatever comes…

The swirl is west of the coastline…that is the feature that we’re now tracking and it looks healthy.

This is the type of system that IF it remains healthy looking that the models will all of a sudden tomorrow grab onto in a stronger fashion and make Sunday>Monday a bigger deal.

Right now though the model data is showing broad lift occurring on Sunday. This lift saturates the atmosphere on Sunday and while there will be low level dry air chewing on what falls for awhile…that too in time, during the afternoon, will yield to the falling snow.

This broad lift will contribute to a somewhat large area of snow developing.

Now the issue is how much liquid falls…and the data for this today shows roughly about 1/4″ to less than 1/2″. The GFS is more uniform with that swath through the area, while the NAM is trying to decipher how long the dry air can put up a fight.

Both models generate this “liquid” equivalent amount mostly on Sunday…also of note with the chilly air mass in place our snow ratios will be a bit higher…meaning a “lighter” weight and fluffier snow that can accumulate a bit faster.

So taken at face value I thing we’re looking at a pretty solid chance of 2-5″ amounts through the region as a starting point.

This isn’t a high confidence forecast right now though…and there could be upside IF we get something a bit more going into Monday…and this wouldn’t surprise me at this point at all.

So the usual caveats apply…

The other issue farther down the road is that IF there is snow on the ground that will impact temperatures Tuesday and Wednesday which is a shame because we could’ve really warmed up…like 50s warm-up…but that snowcover will prevent that.

I knew today wasn’t really going to bring a lot of clarity to the Sunday situation…however it does seem as though the somewhat additional clarity is that unlike what the models were erroneously cranking out in terms of snow production…like over 12″ worth in some areas of the KC Metro…has been trended to something a bit more reasonable.

A late afternoon note…the EURO has jumped way onboard and brings the biggest part of the storm into the area on Monday which IF the wave is strong enough makes total sense…it’s cranking out almost a foot of snow…that seems overly aggressive but upper end numbers would be more likely IF that model is correct. It’s on an island though for the Monday playout…it doesn’t have any other support really from the other data…except for the one thing I keep going back too…the meteorology of it. IF that wave off in the Pacific is strong enough…a thumping of snow is absolutely on the cards for Monday…it really just depends on the strength of the wave.

Tomorrow should be a more “clarity” type blog…

The feature photo today is from Kylinn Hogue. She saw asperitas clouds this morning… 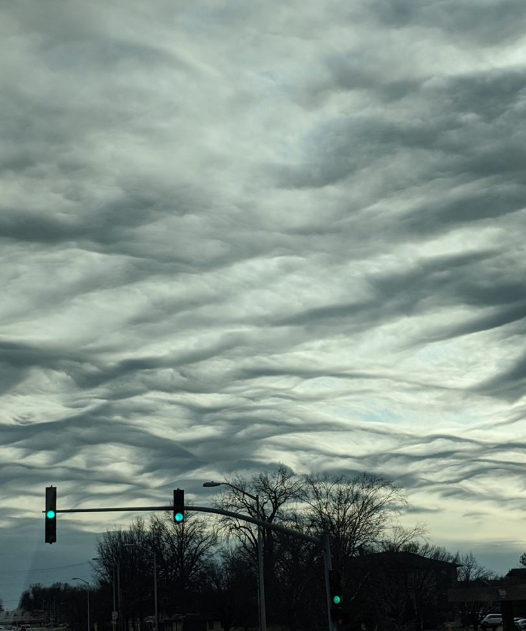 Winter cold will take over on Wednesday with temperatures feeling like the teens in the morning with the wind blowing. Overall though the forecast is a mild one and it appears that we`ll max the temperatures over the weekend! Joe's latest podcast: No polar vortexes? We’re about halfway through the winter season, and we’re seeing some strange things happen. FOX4 meteorologist Joe Lauria discusses odd temperatures in Kansas City mixed…