Let’s start with this…so far this month…and it’s almost halfway done…we’re running 8.5° above average for January. That is significant…through 14 days and today will add to that a bit as we’ve already hit 47° but should be falling by the time you read this at some point today as colder air filters into the area. This is the warmest January start since 2006 and out 13th warmest start to January in record data going back to the 1880s.

Since winter started only 2 days have been below average…one of those days was the snowstorm day. Pretty impressive in the last 25 days or so.

Things are changing though…no more fog…no more warmth into the early part of next week (although we’ll warm up FRI night and start warm in the wee hours of SAT) so overall the days will be colder to much colder.

There continues to be concern about the system on Friday…and the wintry combination it will bring…potentially messing up the roads and school situation to finish the week.

Today: Gradually getting colder with clearing afternoon skies. Highs were in the mid-upper 40s but dropping into the 30s with increasing winds in the afternoon.

Tonight: Seasonable with lows in the teens (shocking)

Tomorrow: Sunny to start then increasing clouds and chilly with highs around 32°

Friday: A wintry mix of mostly sleet and freezing rain in the morning then rain in the afternoon. Temperatures creeping to above 32° by noon but warming into the 40s at night.

This won’t be locking in cold that’s coming…it’s going to be more typical of January though…and really over the weekend the coldest air of the winter is coming…and it will be a cold game for Sunday…and without a lot of afternoon sunshine…25° could be a struggle Sunday afternoon. It will be dry though.

Monday and Tuesday morning we’re down to near 5° I think…so easily the coldest thus far this winter. We’ve had 2 mornings this winter at 14°…this will easily eclipse that early next week.

There is a decent wave coming into the states tomorrow…it’s off the western US today.

That system will come ashore tomorrow and move towards Denver on Friday evening.

This morning there is colder air coming down into the Plains at the same time this is happening. The 9AM map shows the cold front passing south of KC…and colder air will start flowing in as the late morning moves along. 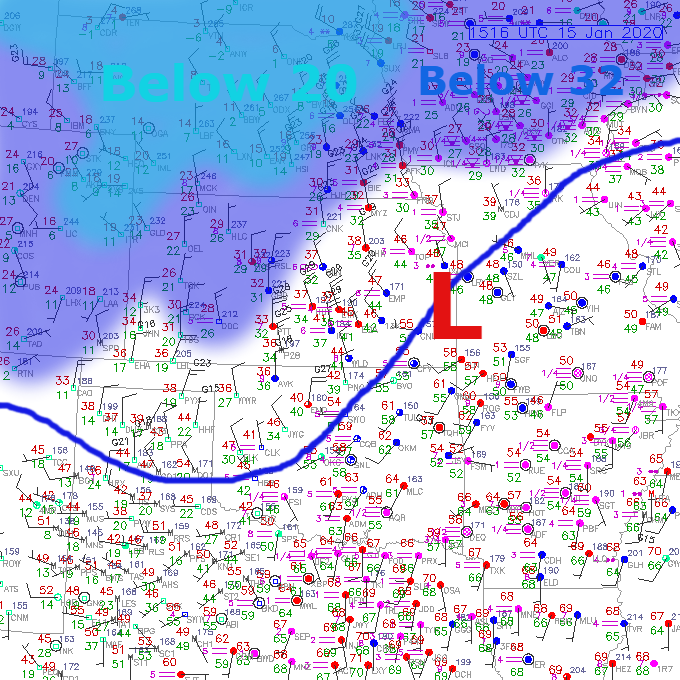 The numbers in red above are the temperatures…there are some single digits in NE and colder up towards the northern Plains.

That’s some cold air up there. Sub-zero but a good margin…and -20° towards ND too!

Then tomorrow…moisture from the southwest in the mid>upper levels starts to come in during the afternoon. This will cut down on the warm-up potential…as the sunshine will be filtered for the afternoon…so we get up to about 32°.

The air will also be dry…with lower dew points. You can see the large swath of sub-tropical moisture going all the way towards Baja California. Within that moisture stream there are a series of disturbances that will act to saturate more of the atmosphere as we move through Thursday night. This is the set-up heading towards Friday morning.

As the atmosphere gets more and more saturated..at some point we’re going to see something come down…in the form of flakes or sleet early Friday morning. There isn’t a ton of lift though with many of these disturbances so the dry air above us will put up a fight for awhile with some scattered snowflakes possible before 3AM Friday morning.

After that though…things may saturate above us quickly. We should be in a combination of sleet and then freezing rain for at least 6 hours…potentially almost 9 hours…till about noon or so Friday. This will be the worst part of the system in terms of complicated impacts. Icy roads with sleet and perhaps some initial snow will not be in great shape. The sleet aspect of this for several hours around rush hour Friday morning may be pretty heavy creating slick conditions quickly.

We should convert to freezing rain a couple of hours after daybreak Friday…and then gradually see the temperatures approach 32° towards lunch. Why won’t this be a snowstorm?

There will be a layer of “warm” air above us…really just a near 40° layer of air between about 6,000-9,000 feet or so that will prevent whatever flakes that form in the clouds from reaching the ground locally as flakes. That means we get this weird combination of sleet for awhile…flakes melt then refreeze into pellets before hitting the ground…or freezing rain…the flakes don’t have time to refreeze into pellets and remain liquid and freeze on the cold surfaces.

Again the accumulation of sleet could be a large issue…and overall the rush hour Friday morning looks nasty unless either 1) the precip holds off for a few more hours or 2) it’s a lighter event for a few hours…although the roads may still get iced up regardless especially the untreated roads.

So Friday AM is a mess and Friday PM when temperatures are closer to 35° is better. We could see 1/2″-1″ from this whole event…again the record precipitation for Friday’s date is .43″ set back in 1931.

Temperatures go up Friday night…then come down Saturday morning as a strong surface storm from the system that is out in the Pacific this morning moves through. This will inject more cold air into the area…although the trajectory of the coldest air is still a bit of a question. The newest NAM model has the coldest air being shunted towards the east of here on Saturday (it’s still cold though locally) 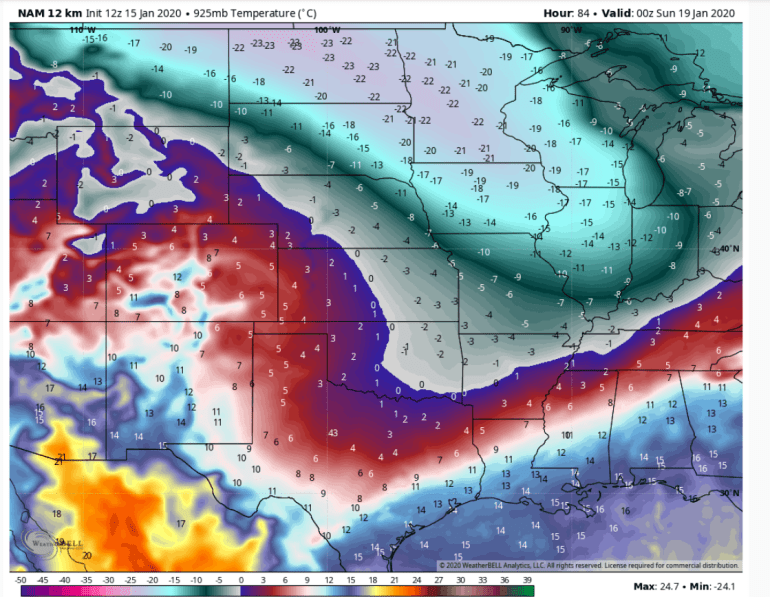 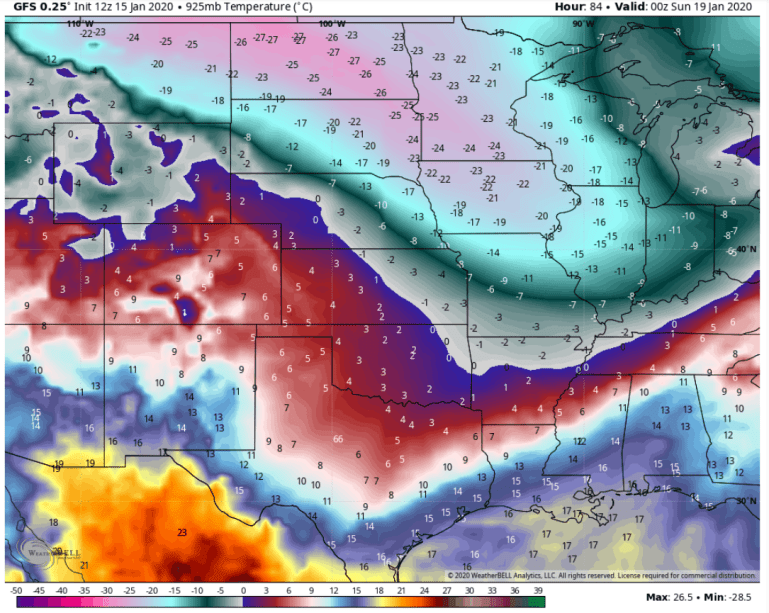 We’re sort of on the edge of the true nasty cold on the GFS…and a bias of the new GFS model is to overdo the cold air. We’ll see. Don’t get me wrong…it’s a cold day Saturday…probably near 32° which is only about 5 degrees below average…so really seasonable.

Then we’re sort of on the edge of the real cold Sunday…I think 25-29° is a good stab right now for Sunday afternoon with a mix of clouds and sunshine possible with clearing weather towards or during the game. Those clouds should prevent a free fall into the temperatures Sunday morning though.

After the cold though…the pattern isn’t overly that cold after next Monday or Tuesday really. I’ve seen some twitter discussion about all this cold air coming next week…and I just don’t see it right now…at least here in the Plains…back east..different story. When I see these temperature anomalies at 5,000 feet for next Tuesday…not encouraging for our neck of the woods. 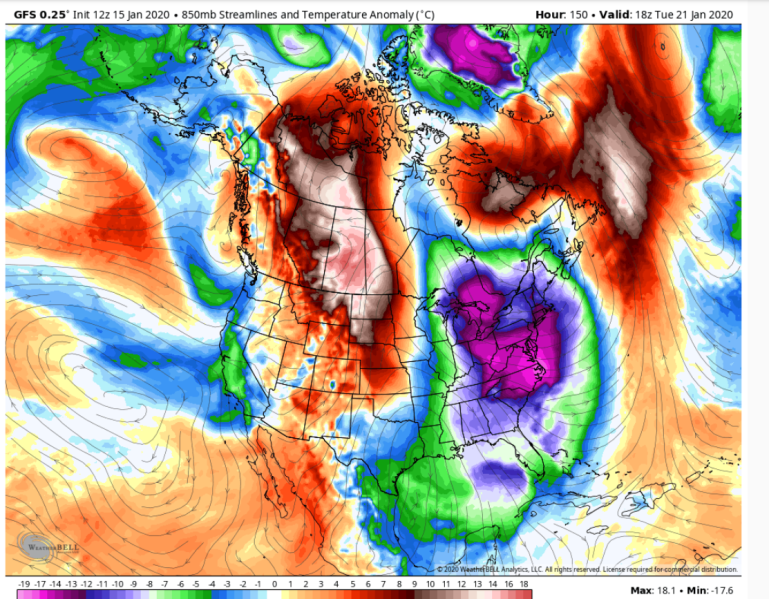 Now remember we had a mini snowstorm in a “sea” of warmth already this month…so let’s not discount additional snow chances down the road.

OK that’s about it…the winds are picking up now at KCI…and the temperatures have dropped off so the cooler air…more seasonable air is coming in now.

The feature photo is from Lesa Wardrip of yesterday’s sunset. 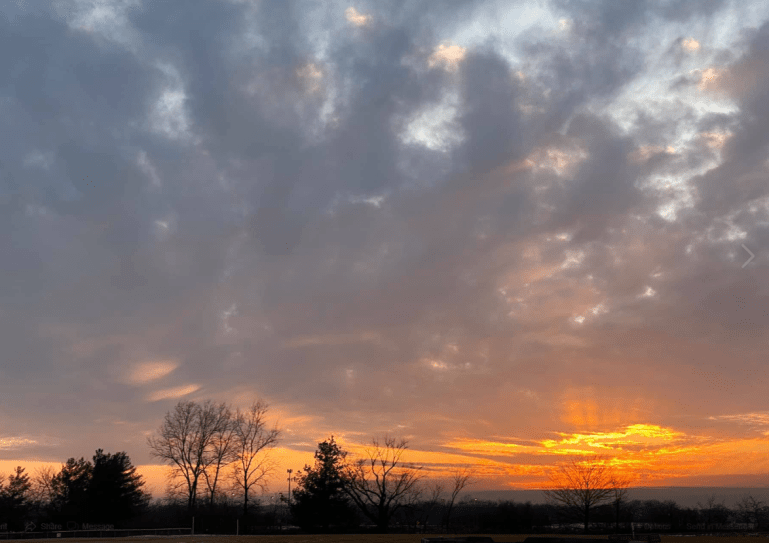