The last waning days of summer are flying by now…we’re less than 3 weeks away from astronomical fall and summer is fighting to hang on. Ore or less it will feel like summer through the middle of next week. There are no “big” fall fronts coming yet…but that will change as the month finishes as it usually does.

Of note though are some rain chances for Sunday…especially from KC northwards…and more heat for a few days next week as well. The average high/low are trailing off now…lower 80s and lower 60s…so it sort of gets harder and harder to top 90°, especially with such green terrain in the area thanks to all the moisture this summer.

Dorian is still in the news and may make landfall in NC tomorrow…a whole bevy of weather is likely including storm surge, flooding rains, wind gusts near 100 MPH and isolated tornadoes near the coastal areas.

Today: Sunny and hot with humid weather in the afternoon. Highs near 90° with a heat index near 95°+.

Tonight: Muggy with lows in the upper 60s

Friday: Not as hot with lower humidity during the afternoon. Highs into the 80s

Saturday: Warm but pleasant with highs in the lower>mid 80s

Sunday: Storm chances AM especially depending on the northern MO activity…temperatures may be cooler IF we get that rain/clouds. Let’s go with lower 80s for now. There is upside and lower side potential there.

Dorian is still a thing…and now the focus is on impacts for the coastal areas of the Carolinas.

This is common with land falling hurricanes especially. Sometimes there are only a couple, other times there are a lot. Tough to act when you have storm surge…flooding…strong winds outside of tornadoes and then the potential of a fast moving, quick hitting tornado too.

Dorian went through a reorganization phase late yesterday and winds were bumped up to 115 MPH…back to category 3 strength but this morning with a lot of it’s broad circulation ashore now…and with shear hitting the storm as well..looks like it’s having a tougher go of things.

Regardless there is so much water now built up and crashing ashore with the storm surge that it really doesn’t matter what the winds are…because the storm’s surge isn’t going to go down in the next day or so. That will be a big(!) issue along the coast.

As will the heavy rains…Dorian is moving along so the rain amounts won’t be like with a slow moving or stalled hurricane…but still 10″+ is possible in some areas.

and this all leads to flooding.

At least Dorian will continue to move and eventually accelerate away from the USA tomorrow…although eastern Canada and the Nova Scotia area have to be watching the storm too.

It won’t do to the US what happened in the Bahamas. It’s not as strong as it was Sunday when it had 185 MPH winds. There is new data coming out regarding how long the winds blasted the northern Bahamas…

As it stalled out, portions of the islands endured:
hurricane-force winds for over 36 hours,
cat 2 for >24 hrs,
cat 3 for 6-12 hours! pic.twitter.com/H57J8oNTkE

Again we may never know the true strength of the surface winds on the northern Bahamas…there are no reliable wind measurements I don’t believe that have information…but some 150 MPH winds are certainly on the table based on recon reports.

Let’s see if Dorian makes landfall in NC in the end…at least for a brief time.

Most recent #hurricane landfalls in the Carolinas by Saffir-Simpson category:

No category 5 hurricanes on record have made landfall in the Carolinas. #HurricaneDorian pic.twitter.com/OitVTDDKbF

#HurricaneDorian remains a Category 3 #hurricane with maximum winds of 115 mph. Since 1950, 4 major #hurricanes have made landfall in the Carolinas:

I think a lot of folks are getting worn out from all the Dorian talk…this thing has been going on for what seems like forever.

The 1st advisories were back on the 24th and Dorian became a hurricane 1 week ago yesterday (the 28th).

Dorian will still be in the news tomorrow for the US…and then it will move away.

Hot today…cold front comes through tomorrow at daybreak with a wind shift towards the NW and drier air working in behind the front after lunch especially. This should be another dry frontal passage for us as well.

Saturday looks great with a cool morning and a pleasant afternoon.

I still have questions about how Sunday will play out…with rain the main issue in the AM at least. There will be a disturbance coming through the I-80 corridor later Saturday night into Sunday morning. This will set of rain/storms up there…the issue is how far south that gets…will there be some sort of outflow that reaches us or does it stay north of 36 highway allowing us to remain is an increasing warmer air mass to finish the weekend.

The data is sort of mixed. The EURO keeps it just north of the metro..although it’s ensemble runs brings rain to us but just barely…while the overnight GFS is a little farther south with a definite outflow of rain cooled air with us on Sunday. While the EURO dips us briefly in cooler air Sunday and then retreats it northwards Sunday afternoon.

Both models in time though Sunday afternoon bring us into the mid>upper 80s. So let’s see how things come together later Saturday and see how far south the rain cooled air will penetrate. The rain chances look better Sunday AM across N MO than they do in KC and even less towards areas south of KC.

This time of the year can be very dry at times…and with the drier air masses moving in…and the warm temperatures…you can really dry out the top soil quickly. I’m thinking of doing some seeding on the yard…but may wait another week or so…

Here is the EURO rain forecast for the next couple of weeks. 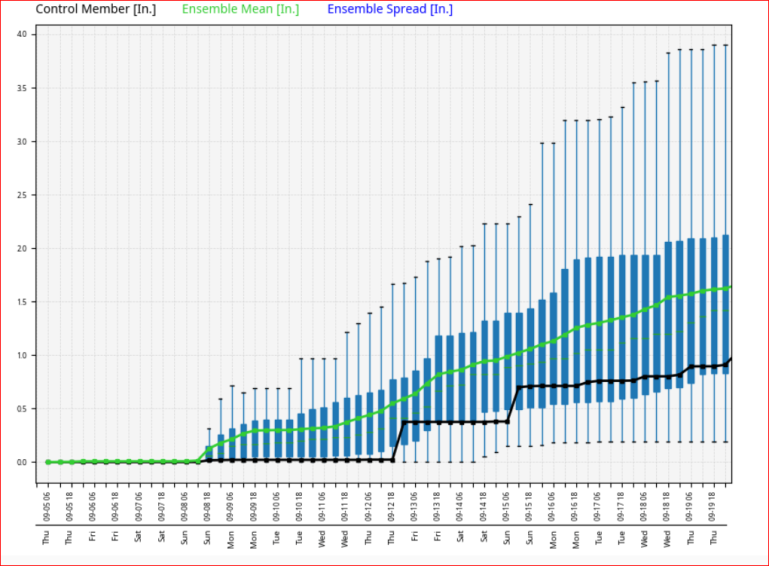 Our feature photo comes from Jamie Taylor‎ who has a friend in Eustis, FL who sent her pictures of the sunset from yesterday. Picture is via George Hart 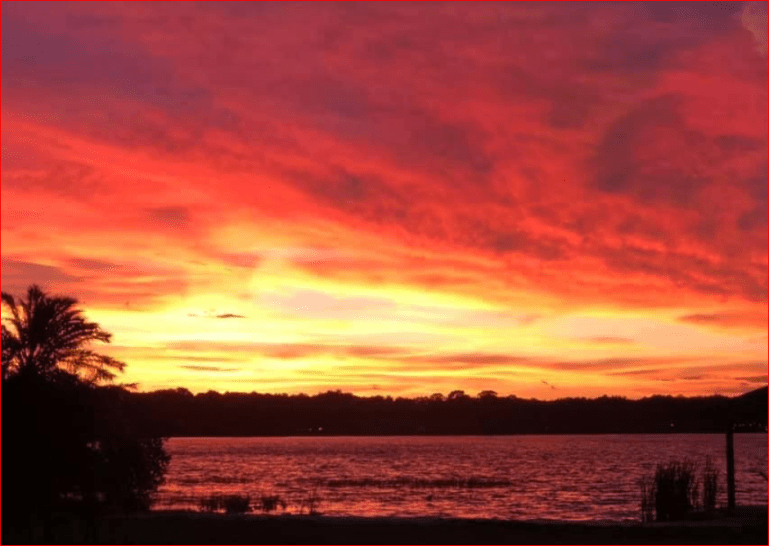