Over the next few days…through Tuesday probably…you’re going to start to notice the winds more and more. Today they’ll be increasing a bit in the afternoon…then tomorrow through Tuesday morning they’ll be blowing pretty good…especially tomorrow with gusts to 35+ MPH possible…

The other issue, at least for overnight is some rain…perhaps a few rumbles too…this will be associated with a fast moving cold front that will zip through the region and usher in somewhat cooler air tomorrow. The bottom line is a lot of air will be moving through the Plains over the next 5 days…and a bigger front is due early Thursday that will definitely catch your attention and probably force you to pull out the winter coats…all before Halloween.

Today: Fog gradually dissipates today…more slowly on the MO side though. Breezy conditions in the afternoon with highs well into the 60s

Tonight: Rain likely, some thunder as well, with lows in the 40s

Tuesday: Breezy but brighter with highs closer to 60°

So far this month we’re running some 2° below average…and this week, especially later in the week…will not help increase that number all that much.

The overall forecast pattern…translated into winter would be an exciting one for sure…numerous systems dropping into the SW US and coming out into the Plains region…would be really getting my attention in late November and December for sure. As is the models are trying every so often to crank out snowflakes close by…even in October…so the pattern is active.

Here is how the rankings set up out there for coldest October temperatures…the #’s indicated 3rd coldest…8th coldest etc. 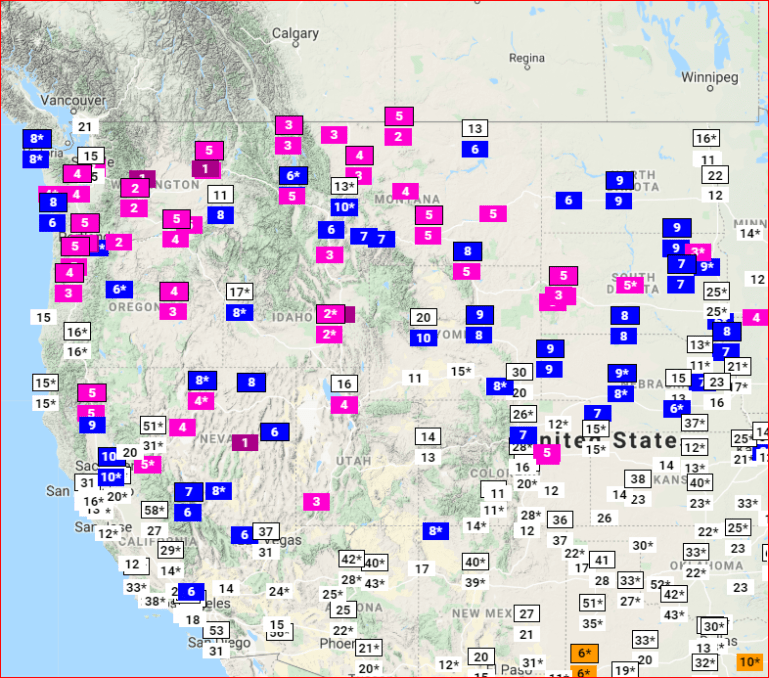 Meanwhile typically there is a ying and yang to the temperatures in the USA…and that is the case again this month…go into the SE part of the country and you get the opposite…some of the warmest weather in October record history is occurring. 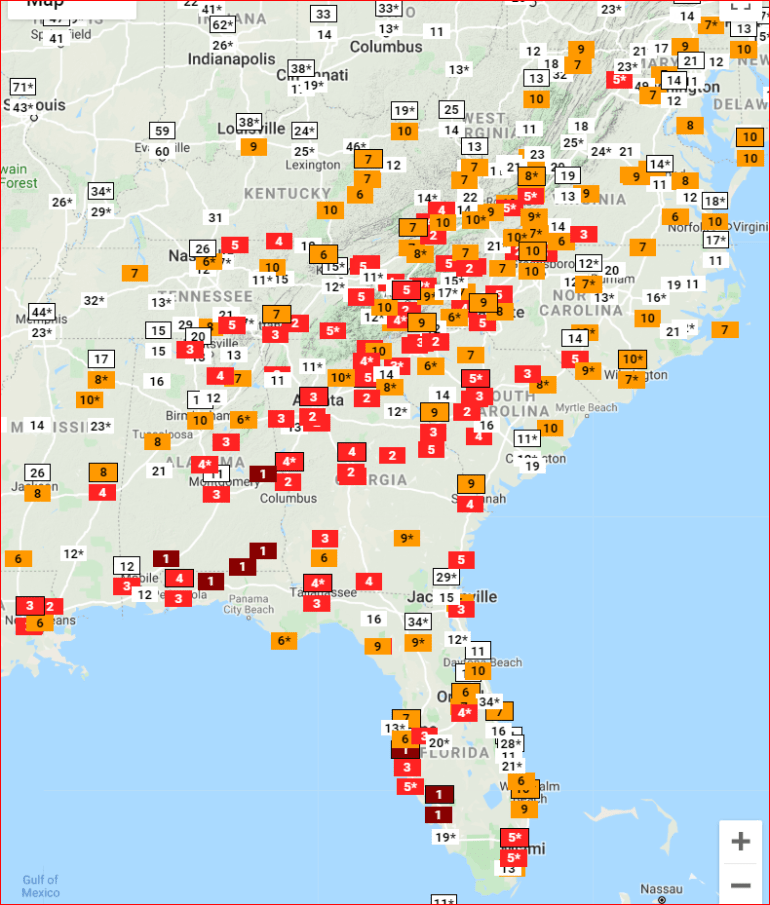 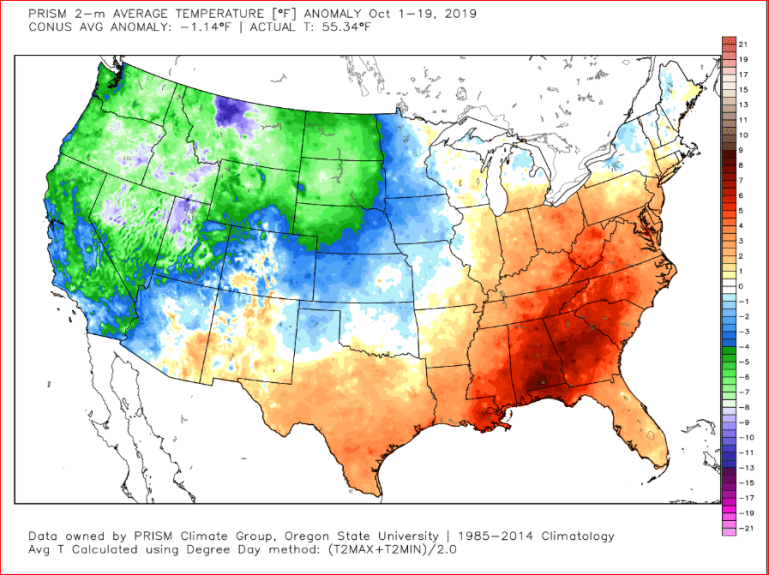 You can easily see the contrast from the west to the southeast US.

So what does this remind me of…last year to a very large extent…although the cold was colder in the northern Plains and the warmth more expansive up the eastern US coast region. 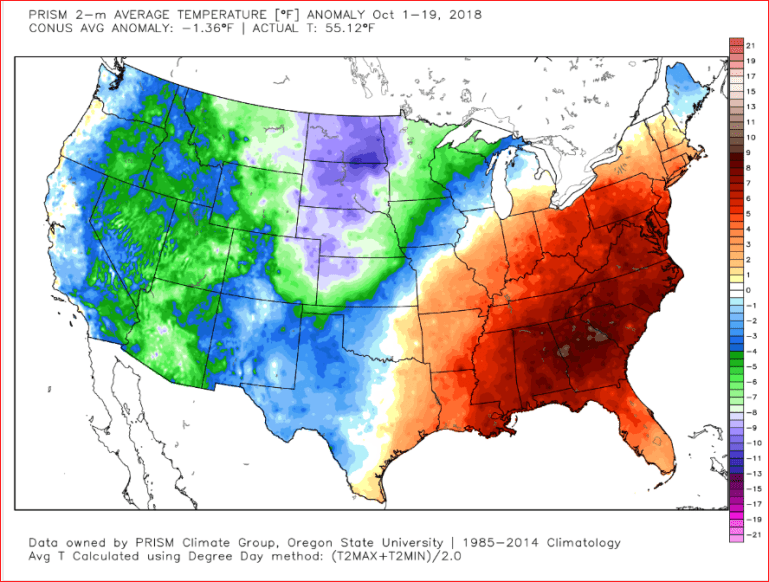 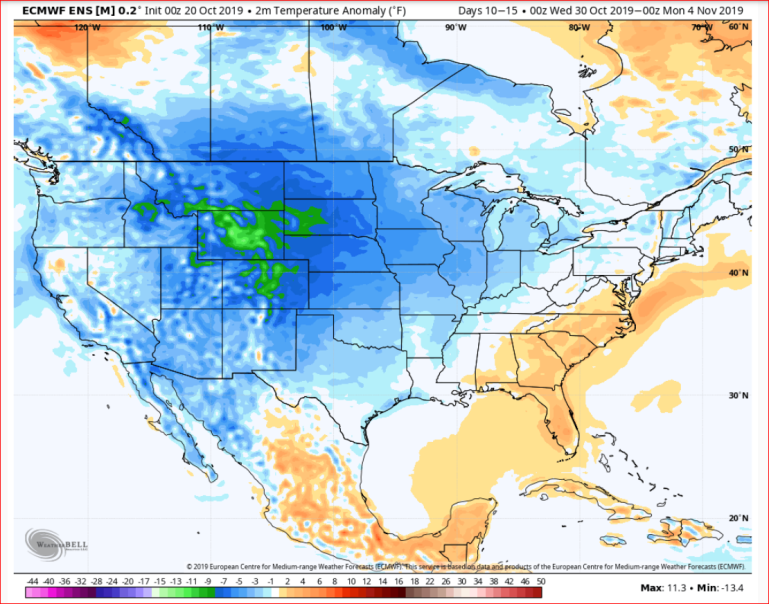 Why is all this important…because where you see the stark contrast…that is a focus for storm tracks…and IF you carry that idea into the winter…well you can see my interest.

Back to the current situation…and that would be our next cold front coming through tonight.

As that front moves through…rain is likely…here is the short term HRRR model…this should auto-update for you. For timing purposes…21Z is 4PM…0Z is 7PM…03Z is 10PM and 06Z is 1AM etc. 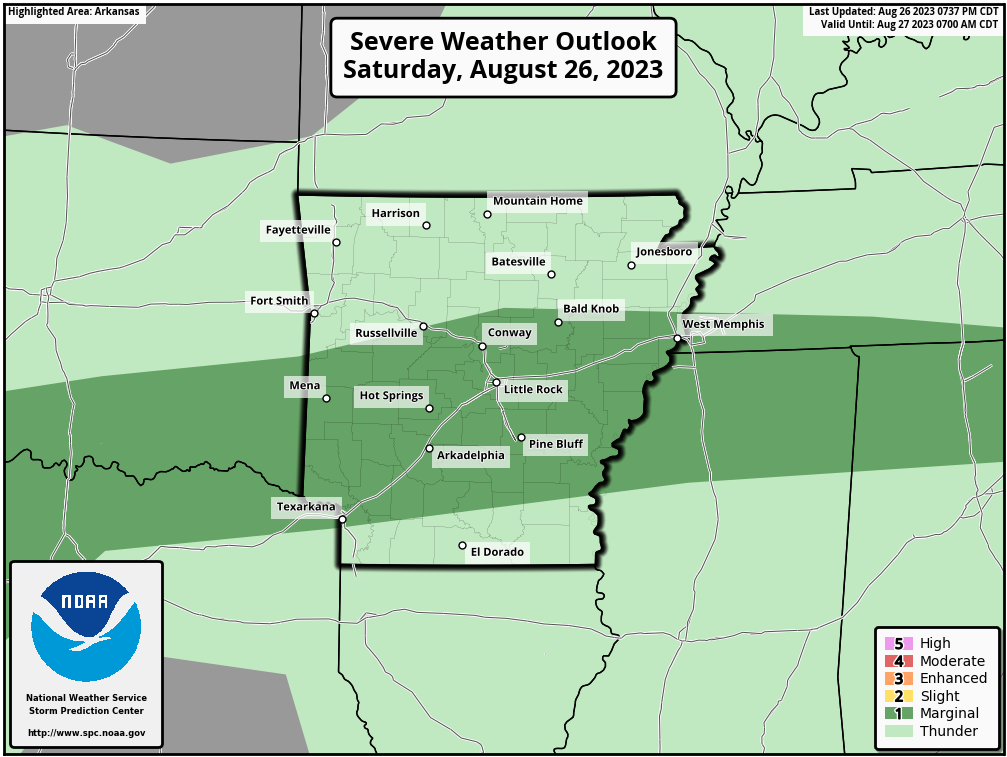 Locally I guess there could be a few stronger storms before 12AM tonight…maybe some hail with those…smaller stones I think.

The storm by later tomorrow (Monday) will be in the upper Midwest…the black lines on the map below show the isobars…or lines of equal pressure. The more isobars crammed into a smaller area…the more the wind blows… 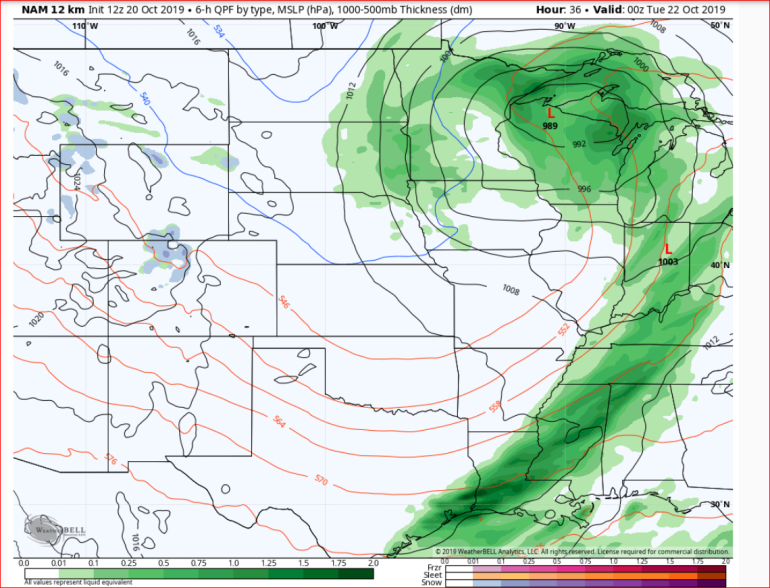 See in the above map how the isobars are more tightly packed north of here…now take a look at the forecast wind gusts…both of these maps are for 7PM Monday. 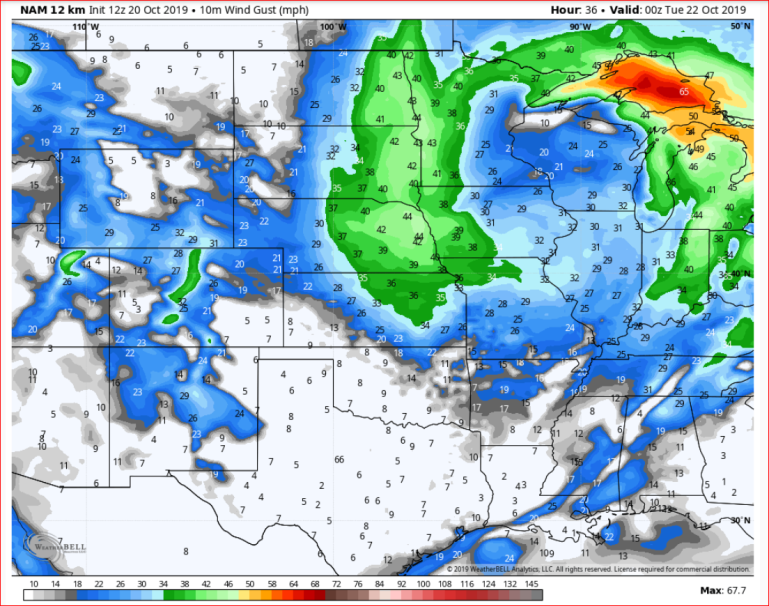 A stronger front is coming on later in the week…more on that tomorrow.

Our feature photo comes from Robin Anderson of the foggy start for some this morning. 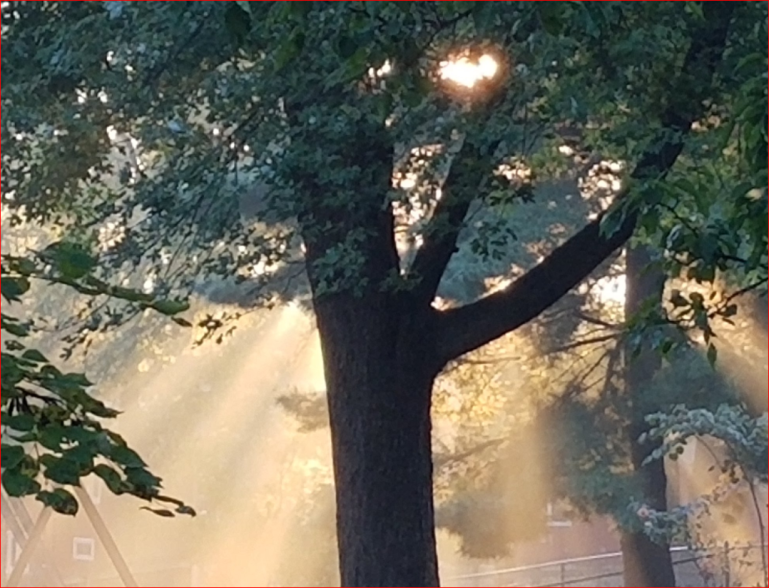 Well we missed tying a daily snow record yesterday for the date...we officially had .9" of snow up at KCI...many others south had about doubled that. The record stands at 1" for the date. So close but we did break a record for the coldest high temperature for the date...so there's that.

More on the amount that fell in the discussion.

Freezing rain has started to move into the metro this midday. Expect a couple of hours of wintry mix and freezing rain with a gradual switch to rain as air temperatures rise above 32 degrees around the mid-afternoon. Precip. will be moving out by this evening, marking the end of all winter precip for the time being. Roads are all above freezing at noon today, but bridges/overpasses/elevated roads will be the concern for slickening up for the next few hours. Moving forward, Wednesday is dry until the afternoon as rain comes in late, continuing Wednesday night and throughout Thursday. We're talking about the wintry weather today and additional rain chances, right here!