Short blog today with our weather settled and Dorian anything but. As of this morning Dorian is a monster category 5 hurricane with sustained winds at least 175 MPH and it may strengthen a bit more today in still favorable conditions. Some of the Bahama Islands will be swept clean of everything…buildings…trees…everything. The odds still say this stays off the coast of central Florida but central FL will likely still feel some effects from the storm with winds and rain. It will be a very close call for them…and it would have me nervous for any wobbles in the track.

Today: Mostly cloudy giving way to some later today sunshine. Highs will struggle today with readings maybe near 80° IF we get enough sunshine.

Tonight: Fair skies and seasonable with lows in the mid 60s. Fog may fill in as well

Monday: More humid with highs into the mid-upper 80s

Tuesday: Summer returns with highs into the upper 80s to near 90°

The only thing to watch this week it appears would be the next cold front later Tuesday or Tuesday night…that may create rain/storms. Model data has nothing right now really…but that seems like it could change. Fronts with 70s dew points ahead of them usually create storms. We do have a weak cap in place though…let’s see if the models catch up to the storm potential Tuesday evening.

After that not much expected…the cooling behind the front may be minimal…and more dry weather is expected.

Onto Dorian which is in beast mode today.

Dorian this morning saw another pressure plunge…and when that happens the winds typically increase.

#HurricaneDorian's central pressure is down to 922 hPa – the same as Hurricane Andrew's landfall pressure near Homestead, FL. #category5 pic.twitter.com/hMfU1iSHIT

#HurricaneDorian now has the strongest winds (175 mph) for a #hurricane this far north (26.5°N) in the Atlantic east of Florida on record. pic.twitter.com/Y89npVlJ1O

This puts #Dorian is rare company as one of the strongest winds in a tropical system in the Atlantic record books. pic.twitter.com/Rp0wx8M7qU

Tropical forecasters are surprised like I am that Dorien hasn’t gone through an ERC or Eyewall Replacement Cycle yet…there is speculation that because of it’s smallish size that maybe that’s a reason. It’s also now starting to undergo more shear on the NW side of the storm but as of yet that’s not affecting it…again perhaps because of it’s small size.

When you see a picture like this this morning…wow! 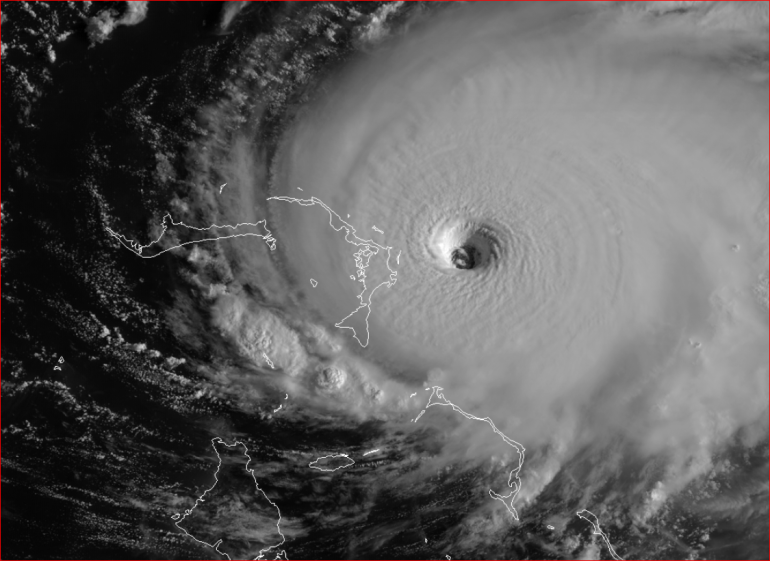 A quick map of the Bahama Island chain…

Great Abaco Island is going to be thrashed today/tonight with this slow moving hurricane. Also the storm surge may be 15′. Over 17,000 people live on that Island group.

Storm surge may be an issue as well for some areas in the SE part of the country…more on that tomorrow.

One final note about the off the east coast of Florida forecast…we’re now down to about a 100 mile leeway factor. 100 miles. Would I be shocked to see a coastline hit…no. 100 miles is NOT a big enough leeway factor. Some evacuations have started just in case. This has the potential of being a worse case type thing (though not as likely). IF the storm doesn’t shift northwards fast enough…the time to really get the evacuations completed with folks leaving later rather than earlier is not going to be a lot. Troubling.