It’s Super Bowl Sunday. A day that will be remembered in KC for decades to come…although hopefully we get back to the Super Bowl sometime before 50 years from now…otherwise I won’t be around to see our Super Bowl return post 2020!

The weather today in KC is about as good as what they’ll experience in Miami. All week long…I was talking about the potential for us to be within 5 degrees of Miami. They saw a cold front come through yesterday…and we’ll see one move in and out tonight and tomorrow before barreling southwards later tomorrow for good.

So the warm air will try to linger for KC southwards tomorrow…then be shunted southbound tomorrow night will rapidly falling temperatures and perhaps some mist or drizzle developing.

A lot on the burner for the upcoming week including some potential snow…although that is a separate complicated issue.

Today: Mostly sunny and warm with near record breaking highs near 70°. The record today is 69° originally set back in 1924 and tied again in 1992.

Tonight: Fair skies and cooler but not overly cold with lows in the 30s

Tomorrow: Tricky day as temperatures will be spread from the 30s north to the 60s south. Hopefully here in KC we’ll get another day with highs around 60° although there may be a spread even within the Metro from KCI south to Lees Summit.

Tuesday: Dramatically colder with highs in the 20s. A light wintry mix or light snow is possible to likely as the day moves along. Especially in the afternoon and night.

So the big day is here…and the weather just couldn’t be better. Outdoor parties are actually doable in early February. This isn’t the 1st time the early part of the winter month in particular has been mild. Strangely…take a look.

On December 5th we were 61°…on January 1st and 9th we were 58° and 66° respectively and today we’ll edge towards 70° with enough wind hopefully.

The weather map this morning shows and abundance of milder than average air for early February across the Plains. As a matter of fact…above us at around 3000 feet or so the air is running close to 61°. It’s actually warmer above us towards Omaha…they reported 19°C on the balloon launch up there this morning…that is 66° at about 3000 feet.

If we go farther up…to about 5,000 feet you can see how unusual this warm air mass is…these show the warmest and coldest temperature extremes at about the 850 mb level or about 5,000 feet up. 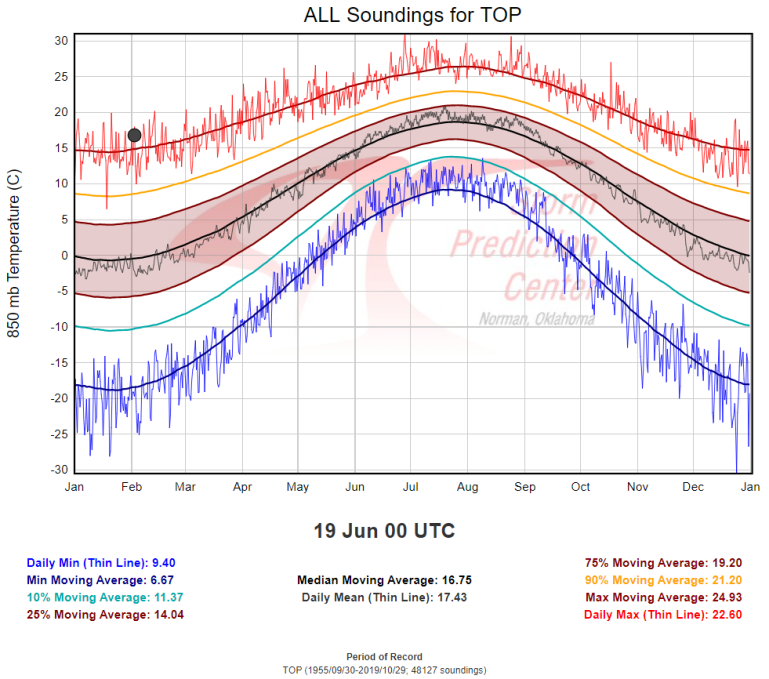 So the air above us really mild. The air at the surface yesterday responded…mid 50s! Today I’m expecting a bigger response.

The west and southwest winds will be blowing down the landscape of the Plains. This is what we call downslope warming. It’s a big deal sometimes here in eastern KS and western MO. All week long I was telling anybody who would listen to me that this is a calssic major downslope warming event today…and it’s nice to see that forecast verify.

So let’s take a walk in the forest for a second. Everyone is under the misconception that Kansas is flat…there are very few elevation changes in our state. This isn’t true. The changes are somewhat subtle but there are changes. The elevation in Goodland, KS is close to 3700 feet. While here in KC the elevation above sea level is about 900 feet. That is close to a 3000 foot drop from west to east.

Here is a map I saw this week that shows how the elevation slopes down from western KS to eastern KS. 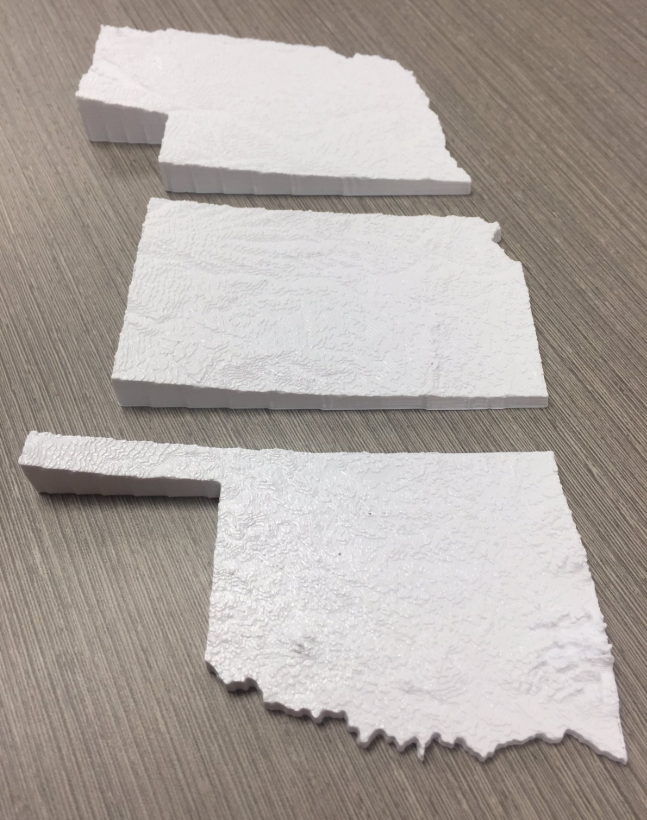 The same occurs in Nebraska and to some extent especially across northern OK.

OK so why does this matter? Well picture a bubble of air. It starts in Goodland and comes towards KC. The bubble of air starts at one level  but descends as it comes into the eastern Plains. As this occurs the air pressure of the bubble increases. When the pressure increases the volume decreases. It ‘s somewhat complicated but this results in the temperature of the bubble going up. Essentially when an air mass compresses it gets warmer. In an ideal world…this can be measured at close to 5.6°F for every 1000 feet of descent. So the same bubble of air in Goodland…coming down the slope of KS is about 17° warmer by the time it gets to KC.

That’s an ideal world…there are other factors that need to be accounted for…clouds…moisture changes of the atmosphere…etc…but you get the “general” idea.

So downslope warming is a big deal sometimes and allows the bubbles of air above us to warm up big time given the right conditions…and today is one of those days.

Now to the common cause of temperatures.

This warm air mass will be eaten at by an approaching cold front tonight. The front now is up across the upper Midwest…and will move southwards today. Here is a surface map at 10AM this morning 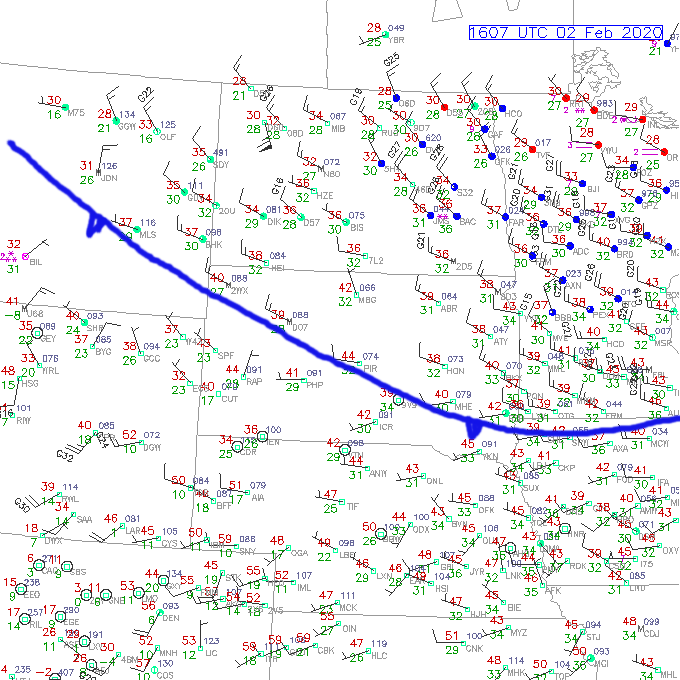 There is some snow still up north…although today the edges of the snowcover up there will really get eaten away. 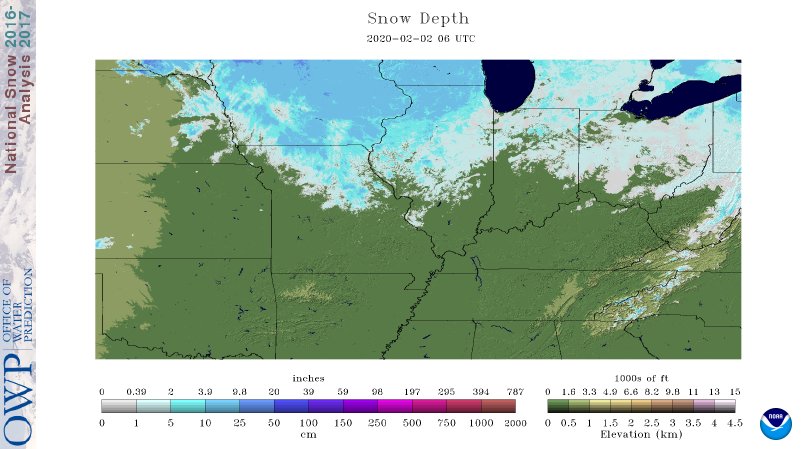 The model data shows this front entering the north side of KC tonight…so when the sun sets…temperatures north of the front will chill down…this cold air will help the front ooze southbound as the night moves along so that by tomorrow morning we get this.

A front that is draped in the Metro. 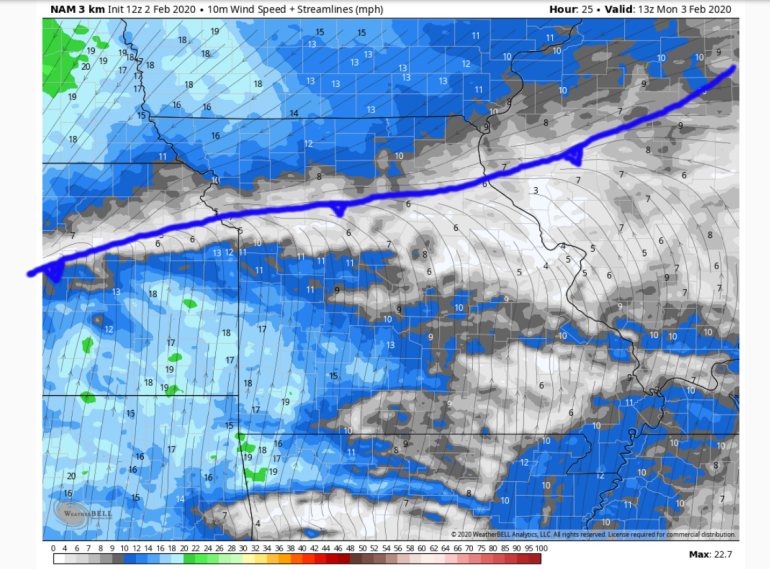 This is a recipe for a bust in the forecast. IF the front is farther south…the 20s tomorrow morning representing the colder air to the north into northern MO oozes south. IF the front is about where the data shows…we barely(!) remain in the warm sector.

The trick is a surface low will develop and move along the front…so it’s possible the front could waver north a bit…and put at least part of the I-70 corridor area back into the warmer air (if the front pushes farther north). That means another run towards 60° is possible near lunch.

Then when the surface low passes through and the winds behind the low switch towards the NW…the cooler weather comes back in or comes in for the 1st time…and we get chilly with falling temperatures.

How dramatic can the change be…well look at the forecast from the hi-res NAM data for 1PM tomorrow. 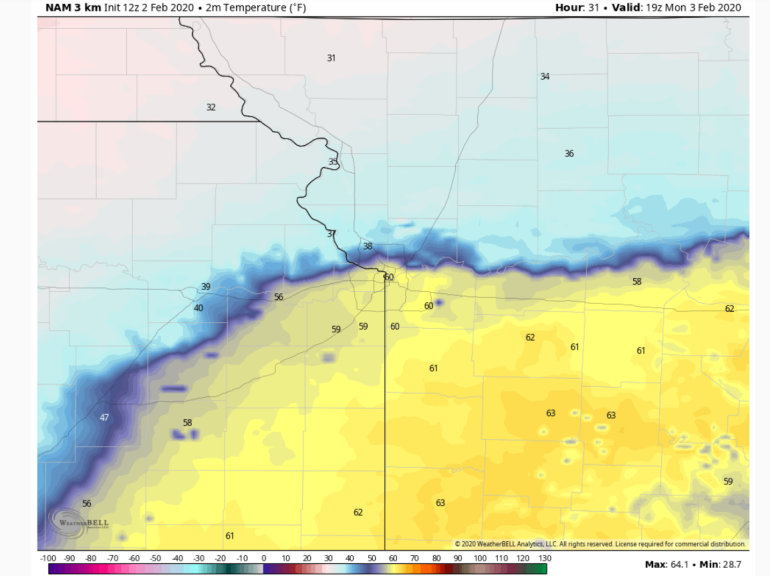 38° @ KCI and 60° in Harrisonville. When their is a conflict like that a light mist/drizzle is likely north of whatever the position of the front is. Again this could be on the north side of the Metro area…it could be 15 miles south with more of the Metro involved.

Not for the faint of heart.

The colder air comes in and presses south for sure later tomorrow into tomorrow night.

Then with cold air in place a series of disturbances comes up in the SW flow aloft. This means the potential of some sort of wintry mix developing. It will be cold enough at the surface for snow but above the surface it may be tough for snowflakes to fall…especially from I-35 south and east.

The model trends though have been getting colder through the atmosphere on Tuesday increasing the snow risk. While there is only some minor lift happening…it could be enough for some accumulation on Tuesday.

Then a somewhat stronger disturbance will approach on Wednesday…how well that holds together and where the moisture holds on when it comes our way will determine if we have bigger snow issues later Wednesday into Thursday morning. The EURO is the most aggressive with this idea…the Canadian is trying but isn’t quite there yet. The GFS is a no go on this.

It will be close and for something 4-5 days out it’s too close for comfort right now.

Regardless it will be colder Tuesday>Thursday…and for some even tomorrow compared to what’s happening today for sure!

So there you go an epic blog for an epic day…for Super Bowl Sunday.

Our feature photo is from Chad Weaver. 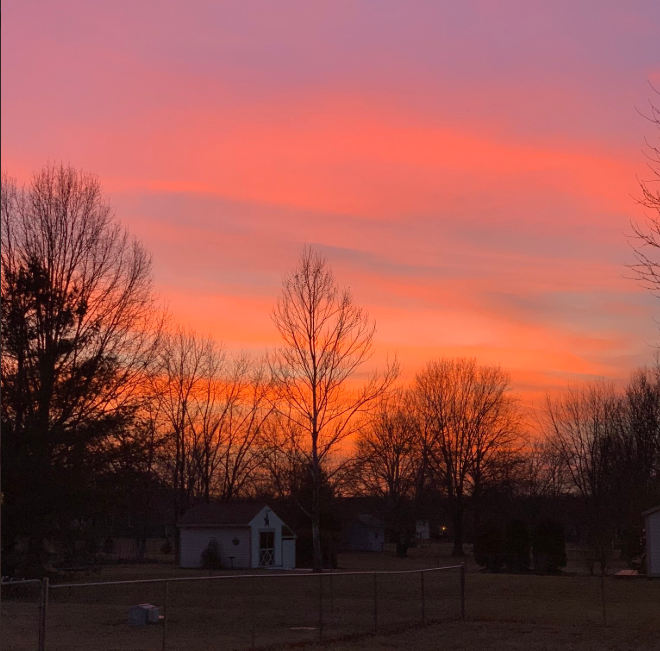