It’s going to be a great day in the KC area…and there won’t be a lot of wind out there…which will help make today the best day of the week. Highs should be in the 60-65° range which is very doable for this time of the year. I plan on doing a few things outside this late morning…with the idea of getting my Christmas lights up perhaps tomorrow while I can still feel my fingers…although there will be another chance to do this on Sunday I think too!

The pattern continues to look active now through Thanksgiving. There is the potential of some sort of Plains storm next week, before Thanksgiving that may impact travel (wintry) in at least parts of the Plains…far too early to get worked up about where though…but it’s something that I will be watching.

Meanwhile a seasonably strong cold front comes into the region 1st thing Thursday morning…ushering in colder weather that will hang around through Saturday morning at least.

Today: Mostly sunny and mild with highs in the 60-65° range

Tonight: Fair skies and not too cold with lows near 40°

Tomorrow: Windy and mild with a few showers possible increasing to rain likely tomorrow late day into tomorrow night and into Thursday morning. Winds may gust to 30-35 MPH and we’ll see increasing clouds through the day. Some thunder is possible as well tomorrow evening.

Thursday: Falling morning temperatures with rain ending after daybreak. Temperatures will remain in the mid 40s it appears, perhaps colder.

Interesting weather coming over the next 10 days or so as a matter of fact the pattern forecast by the models are suggestive of snow next week somewhere near by. This will need to be watched.

One look out in the Pacific shows a chaotic scenario with numerous storms spinning around. Model data won’t be able to handle this well however…but some of the output is interesting for sure.

As we go up to about 18,000 feet in the atmosphere to pick out some of the waves up there…there are more than a few things to see… 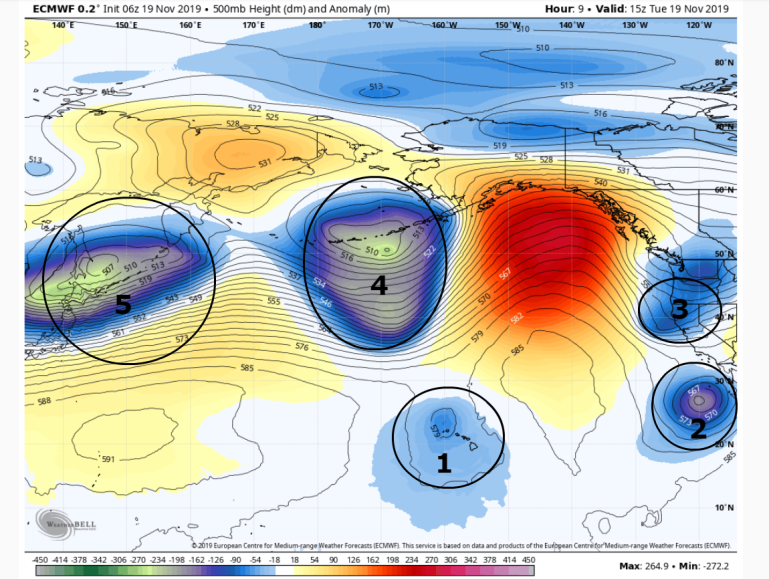 When I see this…I know that there will be a lot to talk about for awhile…the only thing that isn’t overly interesting to me is #1 near Hawaii. How #4 and #5 come together and evolve will be the main issues for next week through the holiday weekend.

There is an upper level storm off Baja CA (#2) that will eject out tonight into the Plains and weaken…there is another dip coming into northern CA  (#3) this morning…that will come out into the Plains Friday and zip by…that could create some snow locally.

As far as tomorrow goes…data this morning shows a developing area of rain down towards western TX coming out into the Plains later tomorrow into tomorrow evening. Some thunder is possible but this will be a fast moving area and rainfall amounts don’t look to exceed 1/2″ in many areas from near KC southwards.

Then the actual front comes through around daybreak Thursday sending temperatures quickly from the 50s to the low 40s during the morning with blustery conditions but overall after the rain we should be dry for most of the day…especially after 10AM or so if not earlier.

Then on Friday the storm that is #3 above…comes out into the Plains…there will be colder air in place and that will need to be watched for some snow potential that also needs to be watched.

Overall the weekend looks nice, as a matter of fact Sunday could be close to 60° again so it will be a good outdoor weekend (cooler Saturday though).

Our feature photo is from John Wayne Gilliland out in Kingsville, MO yesterday 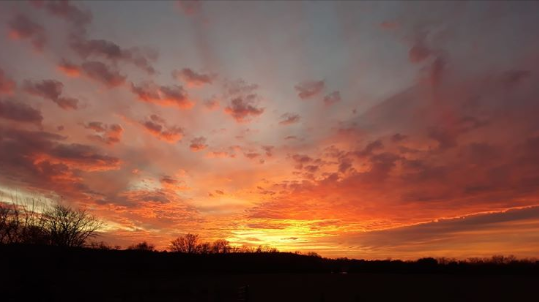