Merry Christmas from all of us at FOX 4 and FOX 4 Weather.

Overall we’re going to be in shorts this Christmas…or at least the kids will be..and the adults will be able to work off some of those holiday cookies this year as mild weather has settled into the area and will linger through Thursday before turning colder heading through the weekend.

While no significant snows are expected at this point…we may get a pretty decent shot of rain before the end of the weekend as a system in the Pacific comes our way.

The bottom line is that Santa will need the wheels tonight…and not the skies for the sled. I’ll be tracking him for you all night on FOX 4 News at 5/6/9/10

Today: Filtered sunshine, windy…gusts to 35 mph possible and warm with highs in the low 60s…just shy of the record high of 66° first set in 1893.

Tonight: Mild for Santa with lows in the 40s

Friday: Partly cloudy and seasonable with highs in the 40s

This weather has got a lot of folks talking…and if you’re not a snow lover…you’re liking this…a lot!

Temperatures actually couldn’t been warm yesterday…we got well into the 50s…and today with a mild start in the mid 40s up at the airport and with enough wind and filtered sunshine…we should get into the 60s this afternoon…and do that again tomorrow.

Here are the warmest days for Christmas Eve and Day…you can clearly see that we’ll be somewhere in the Top 5 more than likely. 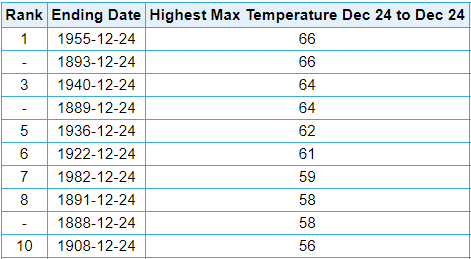 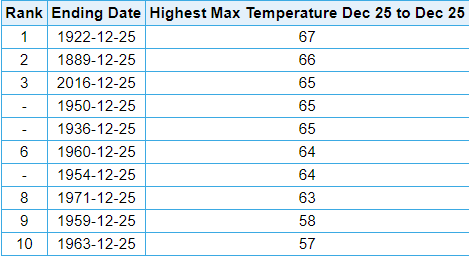 So we’re going to end up in there solidly.

What could be interesting is the 2 day average temperatures…and I wonder where these next 2 days will end up when combined together. 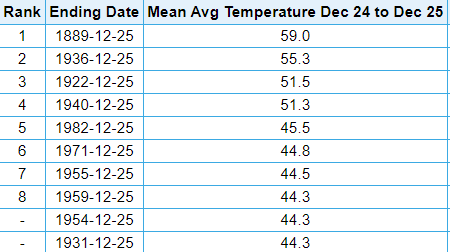 Here are some previous White Christmas times in KC… 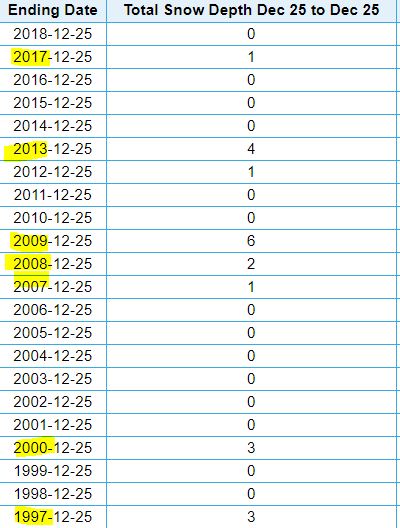 A handful of record highs are possible in the region for the next couple of days.

Our next change in the weather will come on Thursday thanks to a weak cold front coming through…it will be enough to send temperatures back into the 40s though…still reasonable for late December.

The more significant change comes on Saturday as a storm off the western US…comes into the Rockies and then towards the western Plains region. You can see it clearly out there west of the western US.

That storm later today will be off the coast of San Francisco…then drop towards southern CA.

That’s a good shot of moisture in the southern quarter of CA especially. Flooding is likely with that look. 1-2 FEET of snow is possible for the higher elevations of the mountains in S CA.

This system then comes through the SW US…

As the storm comes through the SW…our winds will again return towards the south and bring up milder air and moisture from the southern US.

It won’t be a crazy saturated air mass…but for late December not too shabby either…that means some decent rains are possible, main ly on Saturday…perhaps 1-1.5″ worth and there may be some rumbles of thunder as well.

Colder air behind the system will drain in the region on Saturday and that will set the stage for colder weather for the game.

I’m not too excited about seeing a transition to snow…I guess there could be a couple of flakes on the MO side…but it’s something to watch heading into the weekend at least.

It will be colder though for the game on Sunday…probably only in the 30s…overall seasonable.

The overall pattern is sort of all over the place…ups and downs with temperatures but any cold shot looks transient at best with brief hitting shots of chilly air followed by moderation into the 1st week of January.

Of note as well is the cold up in Alaska. 1) it’s supposed to be cold up there…but 30-60° below morning low temperatures are not out of the question heading into the New Year.

That’s a lot of cold weather up there and typically at some point it gets to the States…but there aren’t too many strong indications of that happening soon.

Our feature photo comes from Diane Caryl‎ taken this morning… 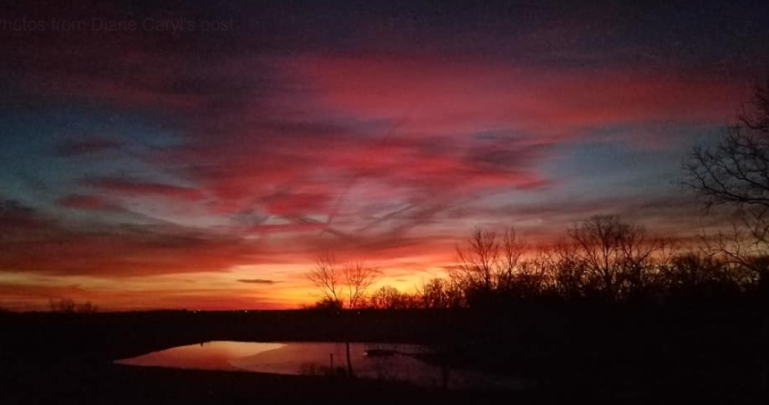 Nicer conditions this afternoon as the SSW wind has really helped us warm up into the mid 40s! This trend continues Saturday with temperatures well into the 50s. Rain moves in Sunday with rain changing to a few flakes of snow early Monday morning. Joe's latest podcast: No polar vortexes? We’re about halfway through the winter season, and we’re seeing some strange things happen. FOX4 meteorologist Joe Lauria discusses odd…