Happy Wednesday…a rather pleasant day is on tap for the region as drier air has worked into the area with dew points in the mid 60s (or lower). Yesterday was an interesting day as a surge of drier air moved into the area in the afternoon, sending dew points from the 70s to the upper 50s in spots early in the evening. Temperatures though spiked into the lower 90s before falling and leveling out in the afternoon. Summer still has some muscle in it and we’re probably going to see some hotter weather with humidity redevelop to finish off the month.

The forecast after today is rather complicated and it’s probably going to be wrong. Rain chances will be there…but who gets what and what shape the clusters of storms coming our way are in when they get here will decide who potentially gets flooding rains and who gets some, but not much. The flooding rain potential is perhaps looking a bit more favorable for northern MO…but that can easily shift and right now I have little confidence in how these next few days will play out.

Today: Mostly sunny and pleasant by mid August standards with highs in the mid 80s with decent humidity levels.

Tonight: Fair skies and pleasantly cool with lows in the mid 60s

Thursday: Mostly cloudy skies. There may be a few fading showers/storms out there, especially in NE KS. Not too bad temperature wise because of the clouds with highs in the low>mid 80s

Friday: Storm chances increasing later Thursday night into Friday AM. Some locally heavy rain s are possible. Highs Friday could be anywhere depending on the cooler air leftover from the morning storms…sunshine…returning south winds…yada yada yada. Let’s go with the mid 80s for now.

I don’t like these types of forecasts. As I explained last night on the news…starting later tomorrow, we’re going to be vulnerable again to disturbances coming down from the NW or the WNW and moving SE or ESEwards. The disturbances will mostly be created from thunderstorms coming together in the western Plains and eastern Rockies and moving into rich moisture that will be getting thicker in the Plains region.

We also know that the rich moisture should create some heavy rains from the storms.

We know that the storms may have the potential of producing some strong winds especially although where the winds set up is not really know.

We know that the models will be unreliable and they’ve proven that already with forecasts varying wildly, especially on the timing side of things. I have little confidence that some of the models will have a clue about what’s going to happen at this point and I expect to see wide run to run changes…one run we get nailed at blank O’clock and the next run there’s nothing there.

We’re going to be vulnerable to rain through Sunday, but the kicker is that what happens in one time period will affect the next in terms of placement and intensity of future rains.

We know that a potent low level jet stream will try and establish itself during the overnight and linger through the middle of the days…this means some of the clusters of storms/rain may have some staying power and create additional (for some) beneficial rains.

I think some areas may see over 3-6″ of rain by the end of the weekend,,,maybe much more than that. We have seen lately these clusters of storms create 5-10″ of rain…this too wouldn’t surprise me. The area most vulnerable to this may be northern MO but again that could shift farther south depending on how things play out.

The humidity break that we’re enjoying will end heading into the weekend. Dew points will come back up to seasonal levels, if not higher. That will help things along.

I’m not going to post rain maps right now…I just have little to no confidence in where the heaviest axis will be setting up. Again the data today suggests the highest risk of the 5″+ totals being towards the north or northeast of KC…but this could easily shift.

What I will show is is some probabilities…this is off the EURO ensemble computer runs…basically showing a % chance of seeing at least 1″ of rain per the model data. Notice the rough idea. This 1st graphic is for Thursday evening into Friday evening. 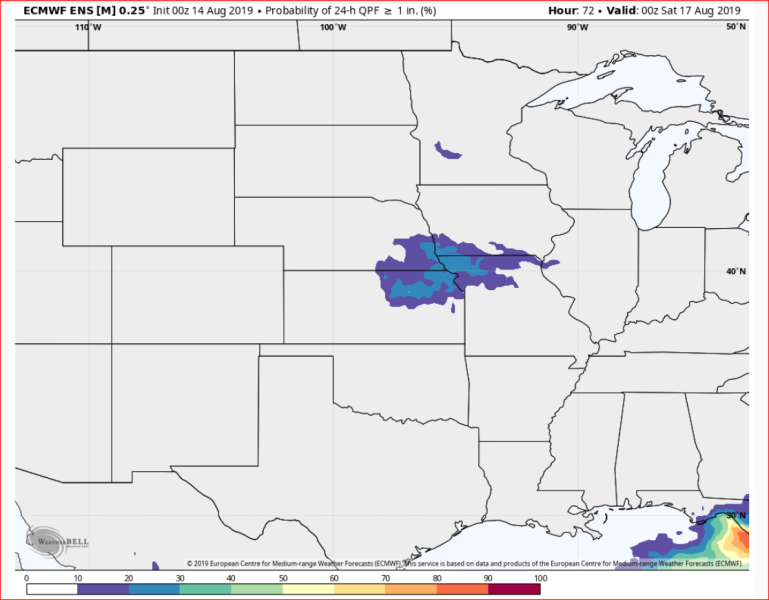 The 2nd one is for Friday evening into Saturday evening… 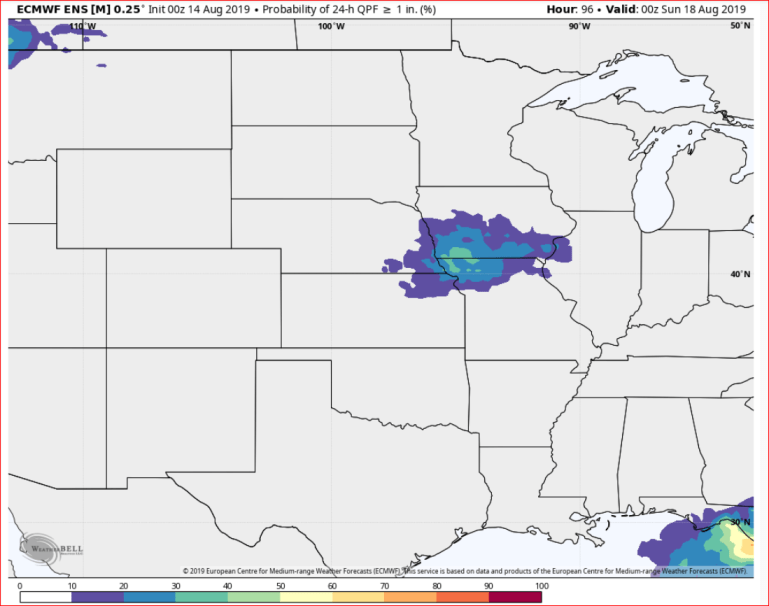 The GFS ensembles actually show this more dramatically, at least for Friday. Here is the same idea…except in a 24 hour period ending at 1PM Friday afternoon. In analyzing that data more…all of this falls Friday AM I think. 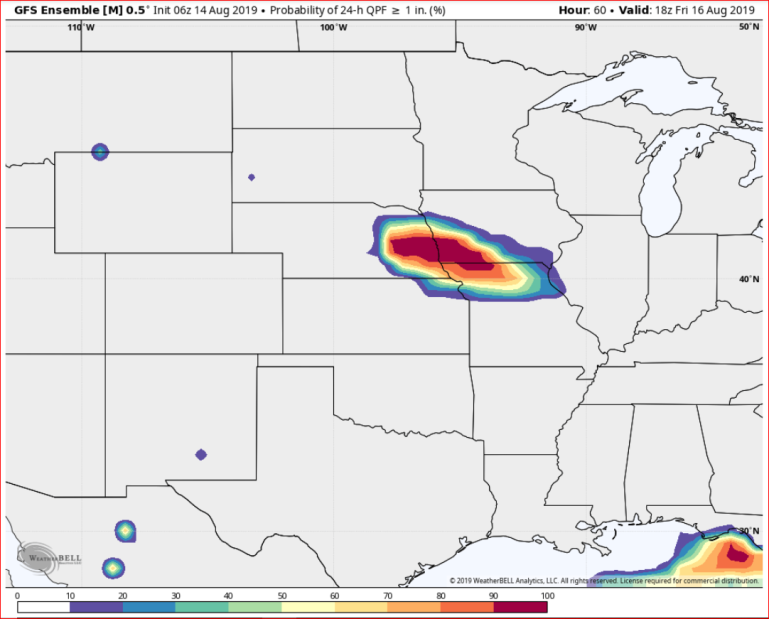 Northern MO which was being missed for awhile this summer has actually had some decent+ rains lately. The next map shows the anomalies. Note the big time rains across eastern KS…that happened a couple of weeks ago…then there is a void from about St Joseph to most of the KC Metro area…so we could really use some rain locally but obviously the flooding aspect of things is not wanted. 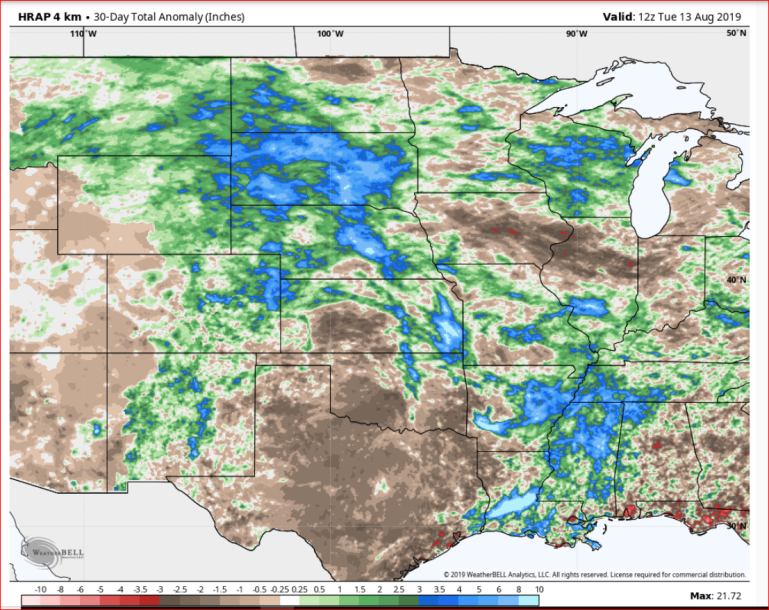 A couple of other notes before I finish…yesterday there was some big-time hail in CO…as a matter of fact there were some 5″+ stones in eastern CO. This is in the process of being verified but likely broke a record for the largest hail ever seen in CO.

Possible record-setting hail fell in Bethune, Colorado this afternoon. Still trying to verify the details here, but if this is true it would set the new state record for Colorado for largest hail stone recorded in the state. https://t.co/JG2GuWBJYD

Also there’s this in Alaska…it’s been one heck of a summer up there.

It’s been crazy warm for them now all year long…here is a look at July. 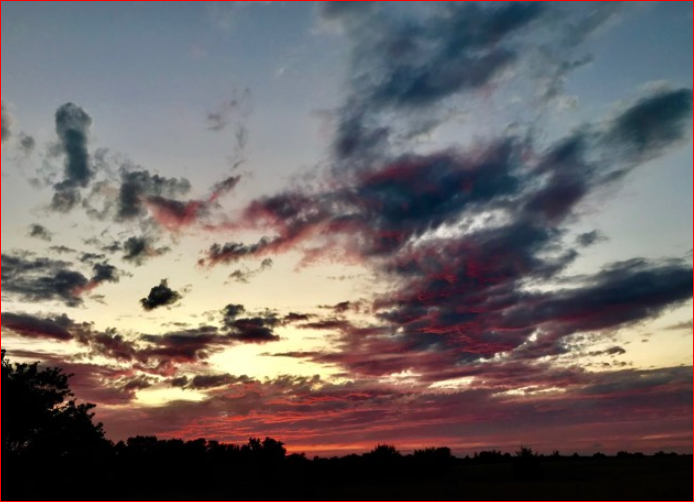