So let’s start with good news…we’re going to start drying out next week…as a matter of fact the rain that we’ve seen this weekend (so much rain) will be the last heavy widespread rain till at least next Thursday…maybe longer. That’s the good news…although there is a system to watch from the north on Tuesday night.

Another 2-5+” of rain has fallen leading to more flooding. June has had over 7.53″ of rain (through 9AM) and when you factor in the wettest month in KC weather history (12.82″) and combine the two…you are at 20.35″ of rain (and more is coming this morning). Regardless of what happens the rest of this month…we’ve NEVER had a wetter May/June combo in KC weather history going back 130 years!

Today: Rain ending later this morning…then a lull with possible new storms later today ( very iffy). Storms will be developing towards the west of the region and we’ll see how they hold together since our instability will be weaker locally. Highs may only be in the 70s

Putting together thoughts for a weather blog…let's start here…so far this month @KCIAirport has had 7.53" (thru 9AM) & since 5/1 a 20.35". Regardless of what happens the rest of this month…we've NEVER had that much rain in May/June before. JL @NWSKansasCity @GFrankTV pic.twitter.com/QjJnx2b062

It is somewhat interesting that in the last 20+ years or so…5 of those 2 month combos are in the Top 10.

So much water…here is a look at some of the 2 day totals via Storm Watch.

North of the River 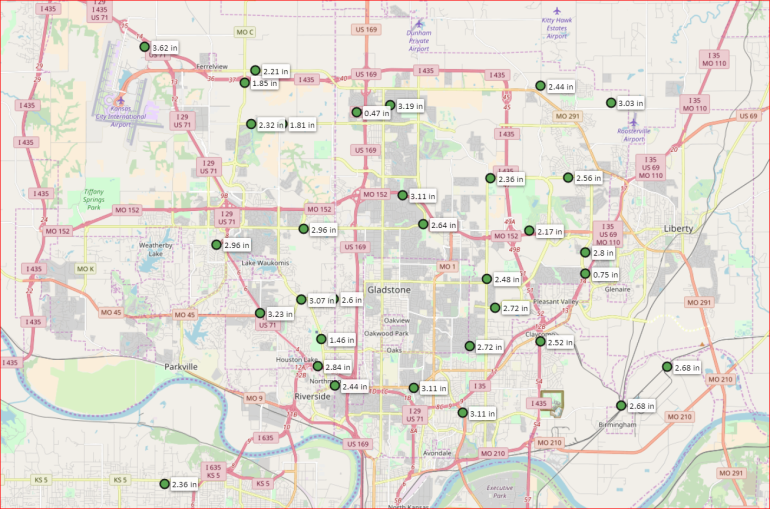 and south of the River 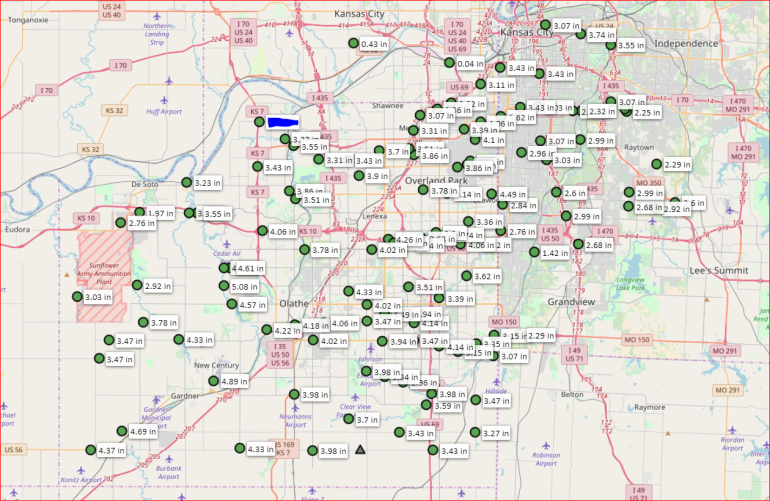 Doppler estimates…this goes back to before the storms hit on Friday morning. 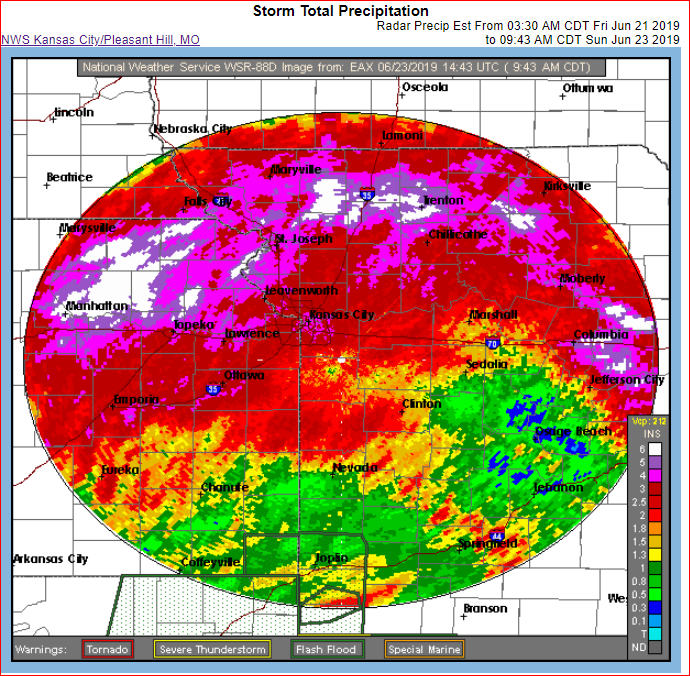 Just a crazy amount of rain.

Here are some other totals across the region over the past 24 hours ending at 7AM. 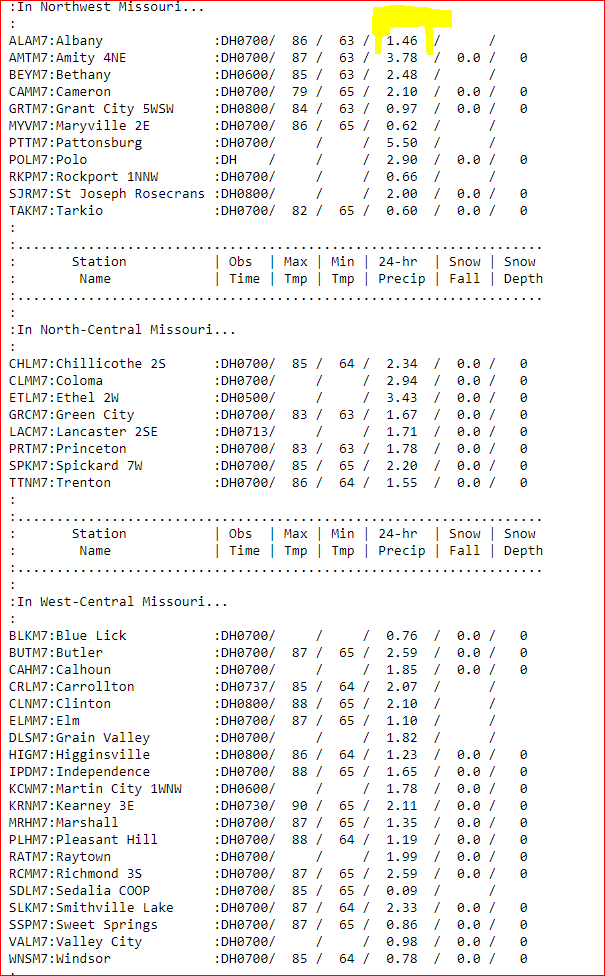 That obviously has led to a lot of flooding…

Too many colors above…that map will auto-update for you.

As you know when you read the blog this week…with the pattern that was unfolding this week I kept saying I couldn’t see how it “couldn’t” rain with this set-up despite the model data that was sometimes all over the place.

So back to the good news…we’re going to see a pattern change this week…and that change is something that really hasn’t happened in awhile…and that would be the development of a summer ridge in the Plains…this will effectively shut things down from a rain standpoint aside from perhaps a few of those more isolated late afternoon pop-ups (if even that).

A ridge is sort of a dome in the mid>upper part of the atmosphere that typically reduces the storminess. When one is in the Plains during this time of the year it gets hot and steamy and with all the moisture in the ground…that should be the case this week. 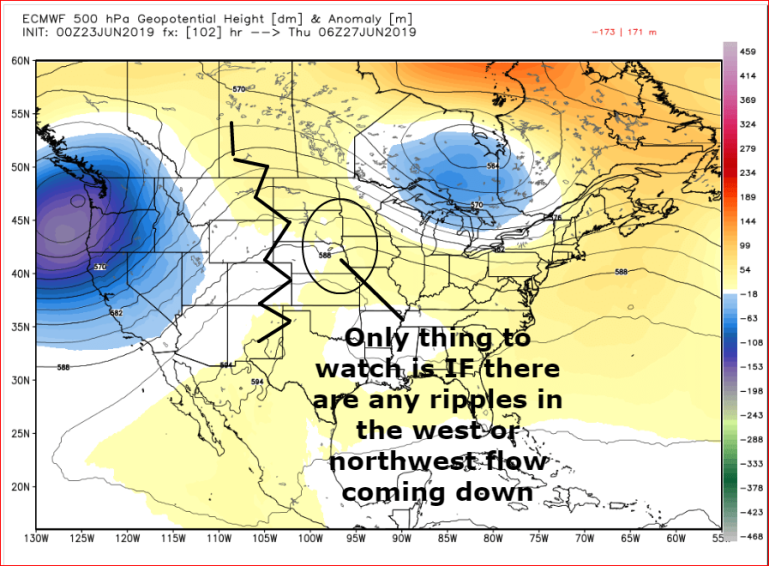 We’ll see how that works out for us...there are some ways we could still get some storms (other than isolated stuff) IF there is a wave that comes out of the western Plains an drops farther south but we’ll deal with that as the week moves along.

The bottom line is that we’re going to break the wet pattern for at least a little while.

OK that’s it for today…some irregular blogs this coming week with the more settled weather (I hope).

Lots of great shelf clouds this past week…this shot from Ryan Murphy up in Cameron is another good one! 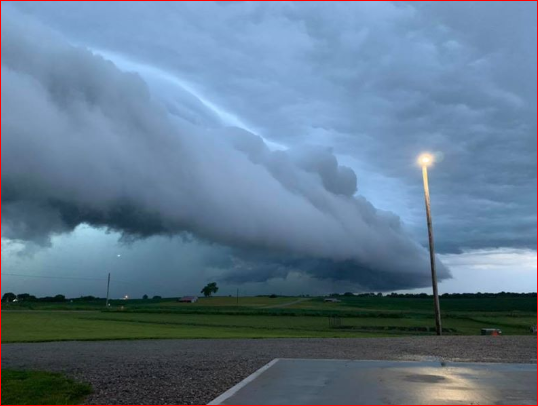 A basketball court in Kansas City's Midtown neighborhood was dedicated for Ryan Stokes on Saturday. Stokes was a 24-year-old who was shot and killed by police in 2013.

Organizers, however, called the event not a protest, but a celebration of Stoke's life and passion.

The first severe weather chance happens tonight. Storms will fire up along and north of I-70 after 8 PM or so and slowly push north. Quarter-size to golf-ball-size hail will possible with the strongest storms as they dump heavy rain north of town. As that round moves away before sunrise tomorrow, be on the lookout for AM rain and rumbles through midday. The second (and stronger) round of severe weather comes after 2 PM tomorrow. A dynamic cold front will push through the metro around that time, bringing damaging wind, large hail, and tornado threats to areas east of I-35. Stay Weather Aware and have plenty of ways to receive severe weather alerts to your phone! Downloading our FOX 4 Weather App is great way to stay up-to-date throughout the weekend!

Last year because of COVID, many Halloween events and even some trunk-or-treats were canceled. But this year parents and families feel much more comfortable to get together and pass out candies.

The candy was flowing and many kids were decked out in costumes at the Vineyard Church KC East’s Trunk-or-Treat.

Alyssa Garcia attended this year and was thrilled this year's Halloween looks a little back to normal.

"We came along way from last year, last year it was just so crazy. I'm happy to be able to be out,” Garcia said.

The Vineyard Church KC East hosted its 3rd annual trunk-or-treat and more than 500 people filled the parking lot where there were more than 30-vehicles set up with candy stations.

“This year I think we are seeing people a lot more comfortable to get out and be in community with one another," Jennifer Reese, Vineyard Church KC East Executive Pastor.

And while the CDC approved of outdoor Halloween activities, it warns that families shouldn't let their guard down.

“I think people are trying to figure out how's the best way for their family to navigate it,” Reese said.

Currently the county is labeled as having substantial community risk.

However, the county has 64% of eligible people vaccinated.

1 dead, 7 injured in shooting at party in Fort Valley

After ‘Rust’ shooting, a look back at other fatal on-set accidents