Good Morning…as promised it’s a different “feel” to the air out there as the dew points have come down to near 60° to start the day. That means with that “type” of air lingering…during the afternoon…it will feel more comfortable and not overly muggy for mid July…and we should enjoy this break from the nasty humidity for awhile it appears.

My attention this morning is towards the northern Gulf region as a tropical disturbance (the former big rain maker locally on the 4th) is meandering around the northern Gulf region. It’s showing little signs of organization right now…it’s still being sheared off from winds above it blowing from the north to the south…and until something changes with that…this thing won’t come together.

Tonight: Pleasant…lows in the mid 60s

This weekend: Warmer with highs 89-93° with humidity levels creeping up but not overly terrible.

The good news is that the nasty humidity has been swept away…that means it’s going to be more comfortable for a few days out there. The bad news is that many areas really didn’t get a lot of rain yesterday (or any), especially the farther north away from KC you went. This is an issue because 1) northern MO has missed out on a lot of the rain for a few weeks now and 2) the late crop planting and germination means that crop needs water in a time where water from Mother Nature is tough to come by sometimes because of the season and the hems and haws of rain chances in the summer months.

For now it’s being called a “Potential Tropical Cyclone” or PTC.

If it comes together and develops a low level circulation with wind associated with it it will become tropical depression and then potentially a tropical storms and then given a name.

In the month of July there have been 125 named storms going back to the 1850s…of course back then there were no satellites for about 120 years to come so odds are there have been a lot of storms that we didn’t know about…but whatever.

I believe 58 of those went on to become hurricanes.

Last night on the news I talked about what New Orleans is vulnerable to flooding rains…and especially with this situation.

The biggest issue is that the Mississippi River is crazy high down there (it eventually empties into the Gulf of Mexico). Why? Because all the rain/snow that we’ve seen in the middle and northern central US has been flowing down that way. The river is running high because that’s where all the water ends up from all the other rivers/streams/creeks etc. 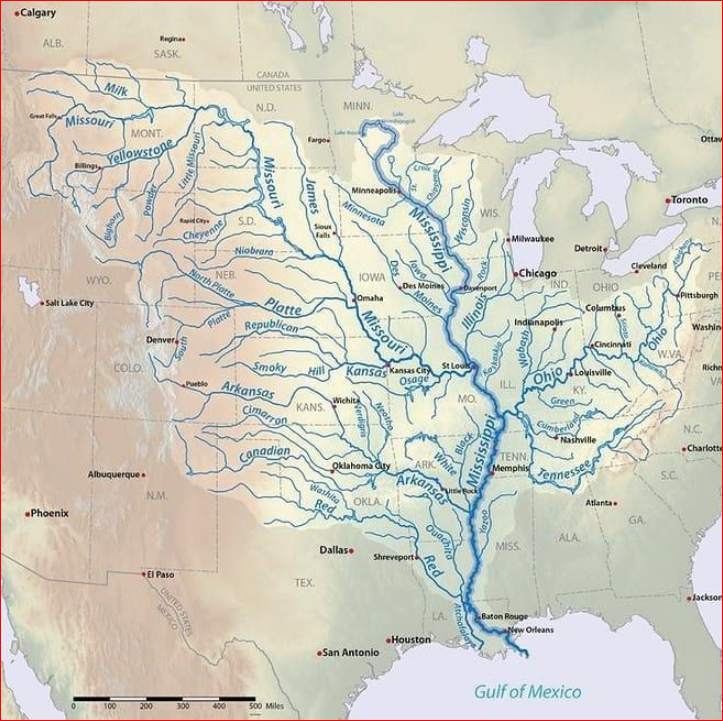 See the above map…all that water drains towards the Gulf Of Mexico at some point.

Right now the MS River in New Orleans is below flood stage. 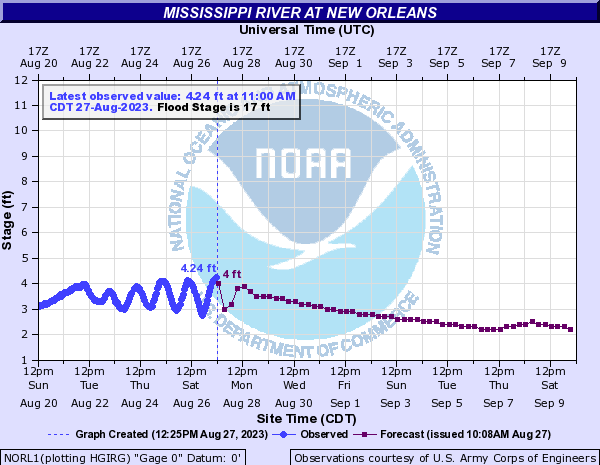 Currently at around 16 feet. Notice the expected spike…that may or may not happen depending on the situation with Possi”Barry”

16 feet is about 13 feet ABOVE what the river normally is during July. Back when Katrina hit and sent water over the tops of the levees…the River was around 3 feet prior to Katrina. So you see the issue.

IF water surges northwards through the Gulf of Mexico into the MS River and continues upstream…this will increase the river heights. There isn’t a lot of room to play here…only about 3-6 feet or so until the river tops many of the levees which are 18-22 feet tall give or take depending on where particular levees are.

There was a lot of development post Katrina to the levees…increasing their size. All this still hasn’t been completed and not everywhere especially connected to the MS River. There are spots where the levees are only about 18 feet high…and where the margin is even lower for flooding.

So you see the concern…IF there is NO surge…and IF possiBarry doesn’t come together…then they deal with regular flooding…which is still an issue because the water has to be pumped OUT of New Orleans when it rains hard…and those pumps can only handle so much.

Yesterday the city received 4-10″ of rain. That didn’t work out too well.

For reference, New Orleans got swamped with 6-8 inches of rain in just 6 hours.

The pumps can only handle 1 inch an hour the first hour and 0.5 inches per hour afterwards.

So obviously heavy rains + MS River flooding would be a BAD combination.

UPDATE: After this initial blog was written…the NHC has indeed named the storm and we have Barry out there now.

We’ll see what possi”Barry” does. Again IF the surge doesn’t happen…flooding from heavy rain may still be an issue…if the surge does happen…that creates MUCH bigger headaches.

Right now it appears that the rain from Barry (maybe) comes up through LA and into AR…then bends eastbound and affects more of SE MO and eastern MO than western MO. Should that happen…and we miss out on that moisture then I’m not sure when it really rains again at this point. The EURO has a pretty nasty heat wave developing next week…95-100° type heat. It has been overdoing the potential heat forecasts this summer by a few degrees but it may still be very hot. 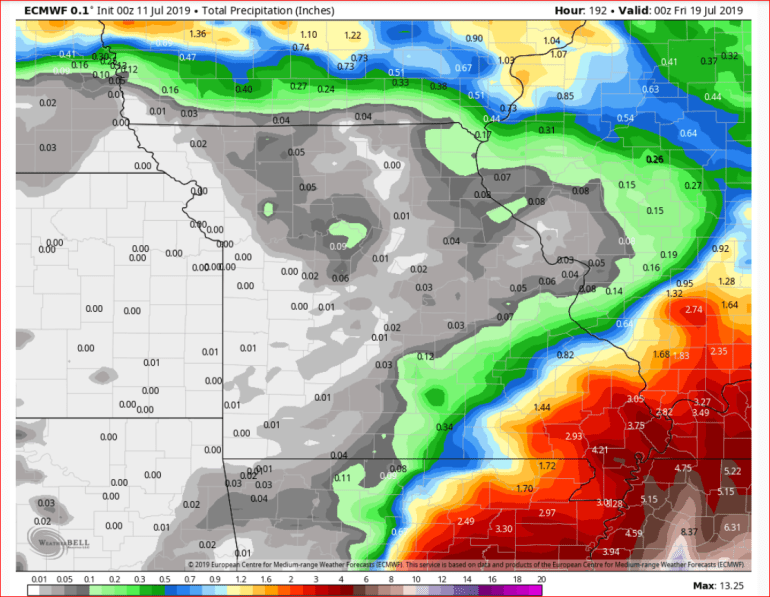 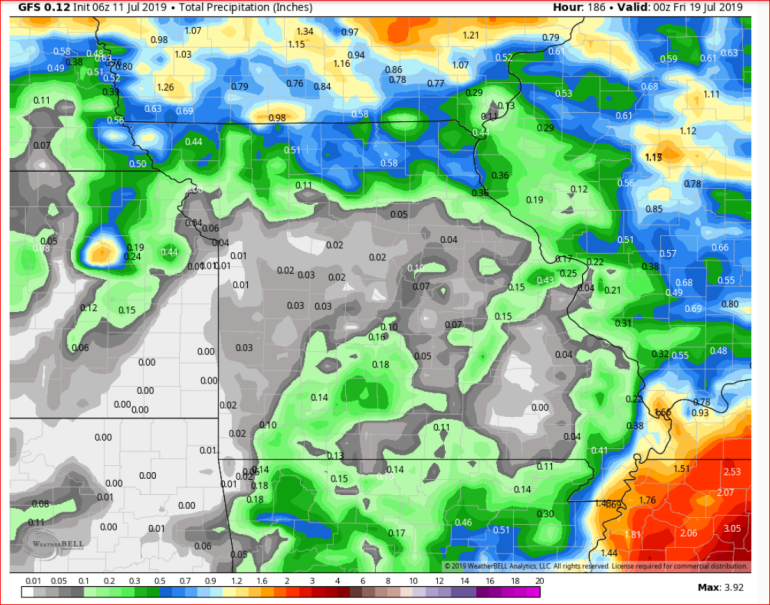 So we’ll watch whatever is going on in the Gulf…and see if there are implications for us…IF the system moves farther westbound…and comes in across eastern TX…we may be in store for something wetter here. 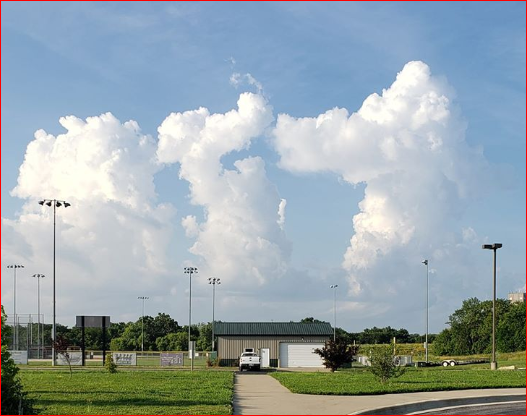