Happy Friday…after a sort of gloomy but more typical December day yesterday we’re going to have somewhat typical December weather today with increasing clouds and seasonable temperatures. The rain comes tomorrow … and the biggest part of the rain maker will be towards the afternoon and early evening. The record tomorrow for precipitation is actually a low number…only .45″ which is the 2nd lowest record for the month I believe…Christmas of 2016 is lower for the record for Christmas at .26″

So odds favor a record precipitation event for Saturday…and there likely will be some fast moving thunderstorms mixed in as well all because of a developing storm that will move from SW KS into IA as the weekend moves along..we’ll be in the warm side of the storm tomorrow…then the colder air comes in early Sunday…nothing crazy for this time of the year but another drop from the 55-60° down into the 30s for the game.

Today: Increasing clouds and seasonable with highs near 40°. There may be a brief period of freezing drizzle from KC southwards this morning…probably not a big deal.

Tonight: Cloudy with steady temperatures later this evening (30s) rising into the 40s towards daybreak

Tomorrow: There will be some showers in the area in the morning but the steadier and heavier rains come in the afternoon/evening with some thunderstorms mixed in briefly. Highs pop to 55-60° with increasing winds as well gusting to around 20-30 MPH

Saturday night: Rain ends towards 9PM…perhaps earlier…the mostly cloudy and mild through the evening with temperatures then dropping before daybreak to near 40°

Sunday: Cloudy and chillier with temperatures in the 30s on average for the afternoon with wind chills near 30°. There may be a few flurries in the evening as well.

The good news for those who don’t like snow is that this system coming our way will be really bringing in the mild weather to the region tomorrow…so snow isn’t expected on Saturday.

The system is now out west as I illustrated for you yesterday.

You can see it clearly towards the SW part of the country.

It doesn’t look like a lot on radar right now…but it will get much better looking over the weekend as it interacts with northward moving Gulf moisture.

The snow was impressive for southern CA though…

Speaking of which I want to show you the dew points…for later tomorrow…and they’re impressive. This is the moisture at the surface and there will be some springtime moisture coming northbound. 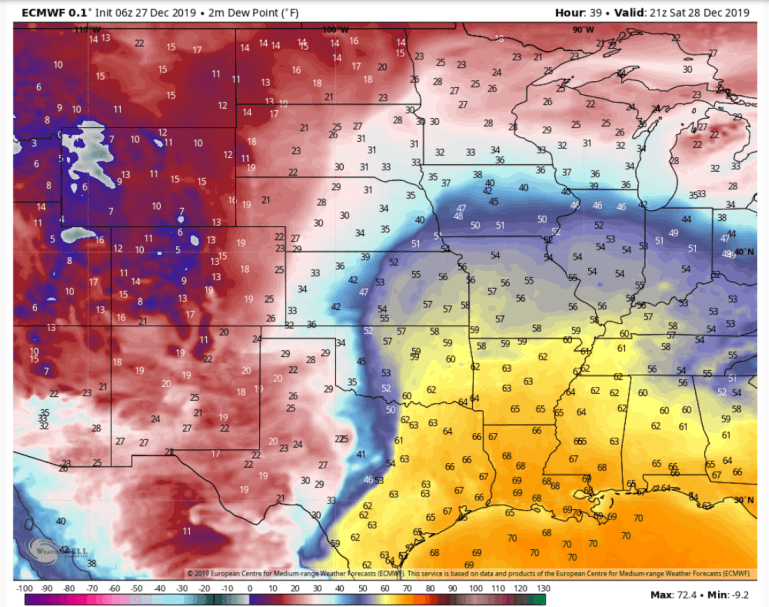 Mid 50s…that’s pretty good for late December…or for any day really in December or January.

Now that is just at the surface…we need to get an idea of what is happening above us as well for moisture…and that’s where the next map comes into play. This map shows the PW or precipitable water…this gives us an idea, compared to average, how much moisture is available overall for the storm when in comes into the Plains…and there’s a lot…a whole lot. 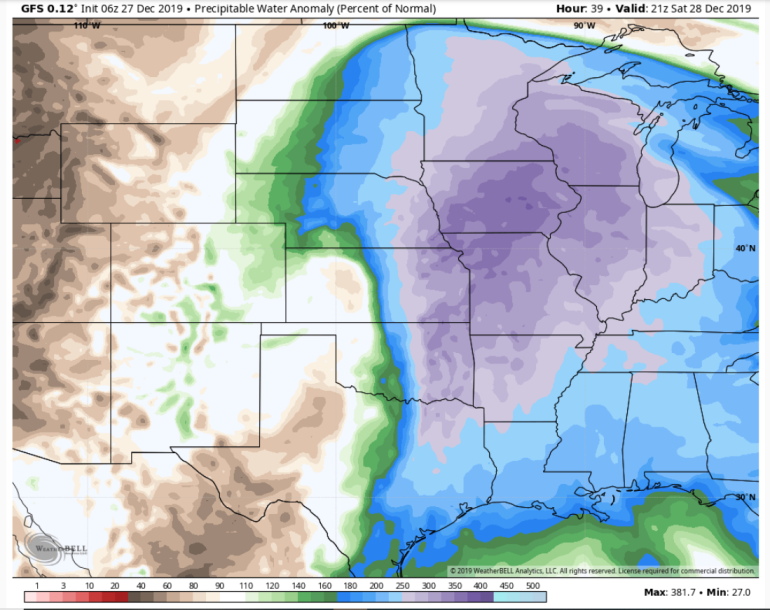 That’s 2 to almost 4 times the amount of moisture that’s typically out there for late December…that’s impressive (!).

So the storm will have a lot to work with…

As we go farther up in the atmosphere…to about 18,000 feet..there are two pieces to the puzzle.

The main storm will be in the Plains but a 2nd piece, which actually may serve to delay the rush of coldest air into the area on Sunday will be rounding the bottom of the main storm. 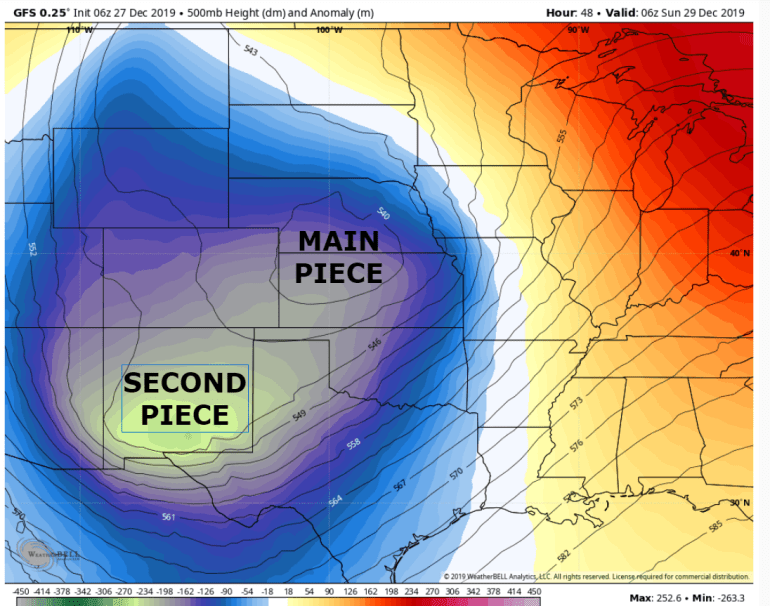 The 2nd piece could create some sort of wintry mix to snow somewhere around the area, perhaps favoring NW MO and NE KS…later Sunday into Sunday night…something to watch for the end of the weekend.

Then chillier air comes into the region for next Monday into Tuesday AM before we moderate. 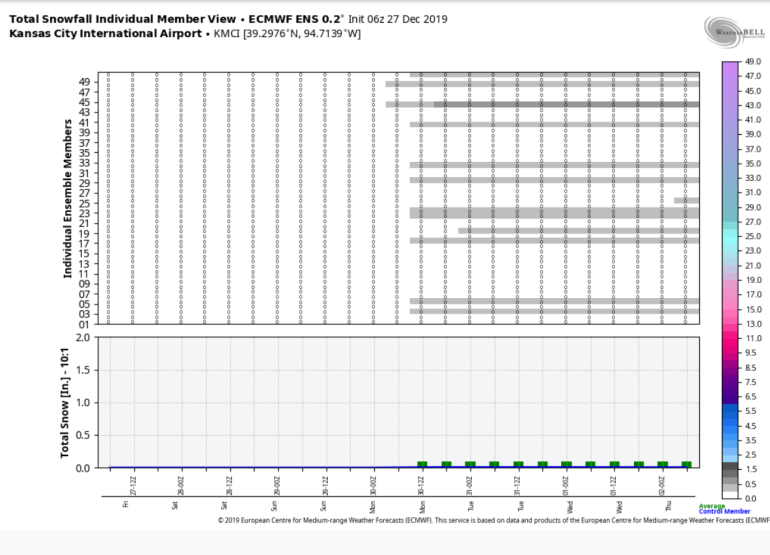 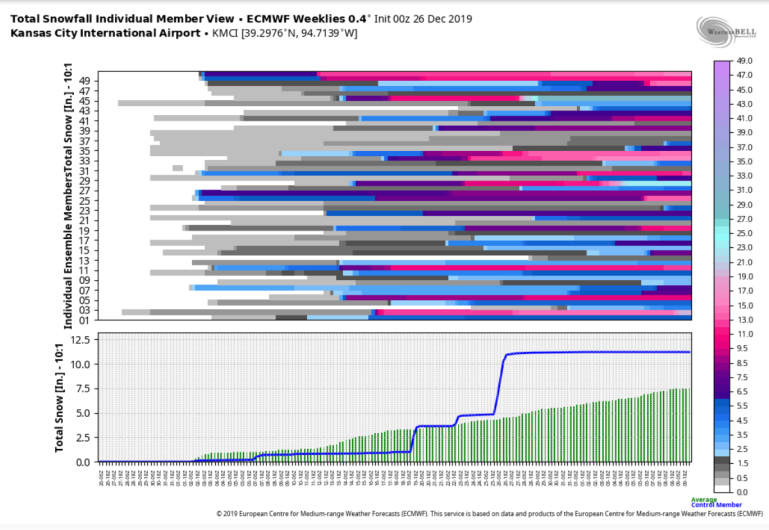 There is some data within those 50 runs or so that has some bullish snow totals…there is also some runs from last night that are lousy for snow…only a couple though. 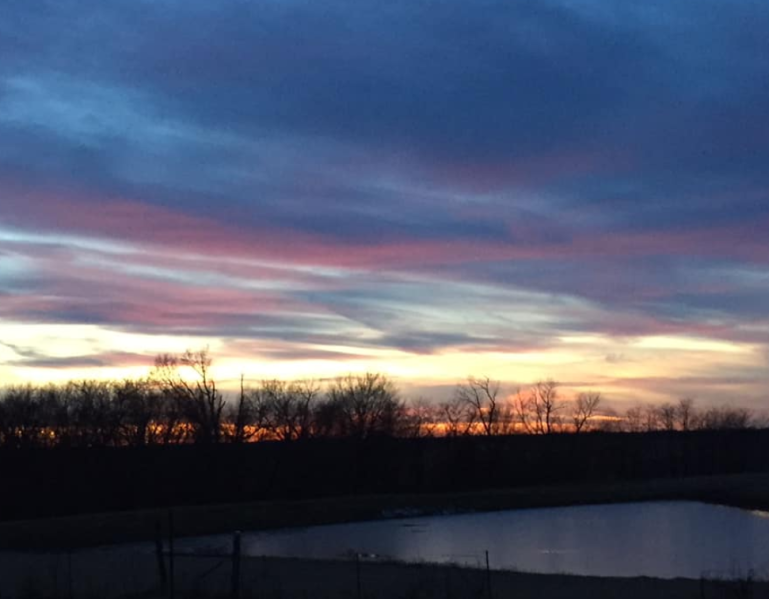 Very windy conditions today but the wind will continue to settle down slowly. Temperatures are slightly cooler Sunday. Early Tuesday rain but that should be our only chance until the end of the week. Temperatures trending cooler by the end of the week as well. Joe's latest podcast: If you run a private business, especially if you rely on specific weather information to either make or lose money, there is…