Today though…reality…thanks to a cold front that moved through during the wee hours of the morning. Our official high today was 59° set back just after 12AM. We’ve been dropping and leveling off ever since…and when that colder air came into the warmer air and undercut the moisture…fog was created…and that is the view out my window right now.

Rest of today: Cloudy this morning then perhaps some breaks this afternoon. That is the main issue locally. No breaks and the day won’t get to 38°. With breaks and 42° is doable.

Tonight: Partly cloudy and colder with lows in the mid 20s

Tomorrow: Not too bad of a day with highs in the mid 40s

Saturday: Off and on rain…some thunder. You’ll wake up to milder temperatures and highs may approach 60°(!)

Sunday: Blustery and colder with temperatures closer to freezing with clouds and maybe a few snow flurries locally. Wind chills in the 20s 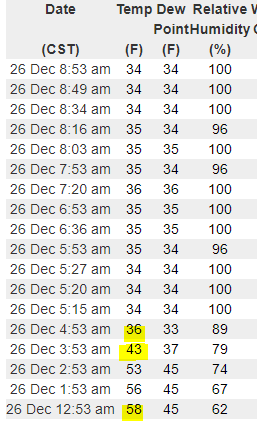 From near 60° to the mid 30s. Important to remember that the average low is in the lower 20s to finish off the year.

So impressive but then again what happened these last two days was so off the hook that reality can be deceiving.

Here is the 9AM map…the temperatures are in RED…

These clouds that are out there are going to be an issue. While we have surface winds that are bring in cooler air…aloft, and only a couple of thousand feet up…it’s the same air as was with us for the last couple of days…warmer. As a matter of fact this morning up around 5,000′ up…it was close to 55°.

So what we have happening this morning is an “inversion”. Colder air below…warmer air above. The end result is clouds…and the models last night totally underestimated this potential.

For KC…II really wonder if and when we break out today. We also have higher clouds now streaming over the lower clouds…that will reduce the incoming solar radiation and keep us more locked into the “inversion” and the trapped cloud cover for the time being.

We should be in better shape tomorrow.

Then the next storm comes our way. This storm is out west and created heavy rains in western CA yesterday and even flash flooding with a couple of tornado warnings late last night.

That will come into the Plains over the weekend and pass towards the NW of KC. This will allow moisture from the south to stream northbound…at the surface (higher dew points) and aloft as well…so the air is going to get saturated with moisture. The higher dew points (think almost spring) will force the temperatures up overnight tomorrow into Saturday morning so you may actually wake up to readings closer to 45°-50° and we’ll keep going up despite the showers in place.

Dew points should be well into the 50s in the afternoon and assuming that’s the case and since the temperature can never be below the dew point…that means highs 55-60 are doable. Even some upside depending on the situation. AS a matter of fact while we won’t be close to record highs that day…we will have a Top 7 warm day for the 28th. 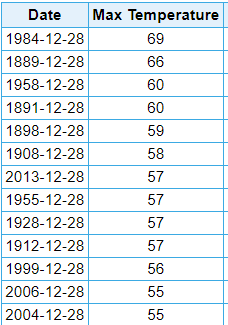 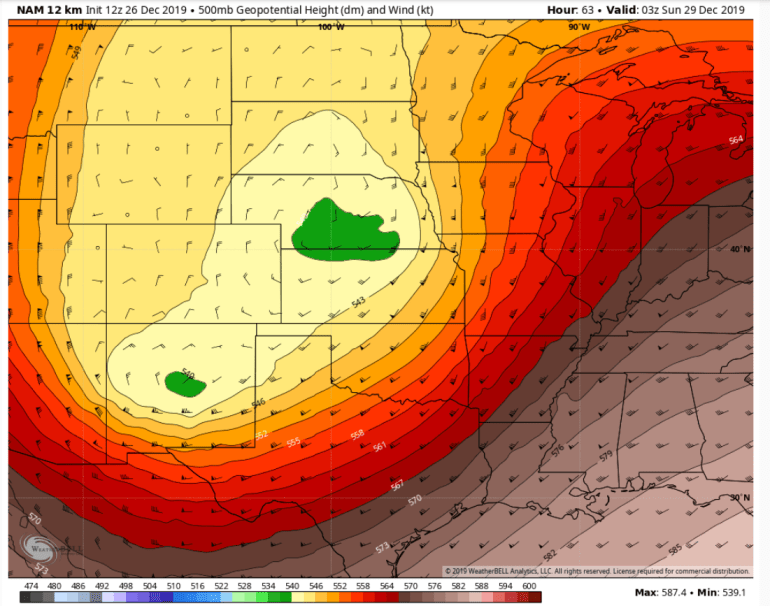 The main storm is towards southern NE…with a “baby” storm towards NM (more on that aspect in a second).

The main storm will set into motion the higher rain amounts…some may see 1/2″-2″ of rain depending on storms.

During the Spring season this would be a severe weather set-up for parts of the eastern Plains and Dixie…for late December things aren’t quite there for us at least…maybe farther towards the SE of the region. 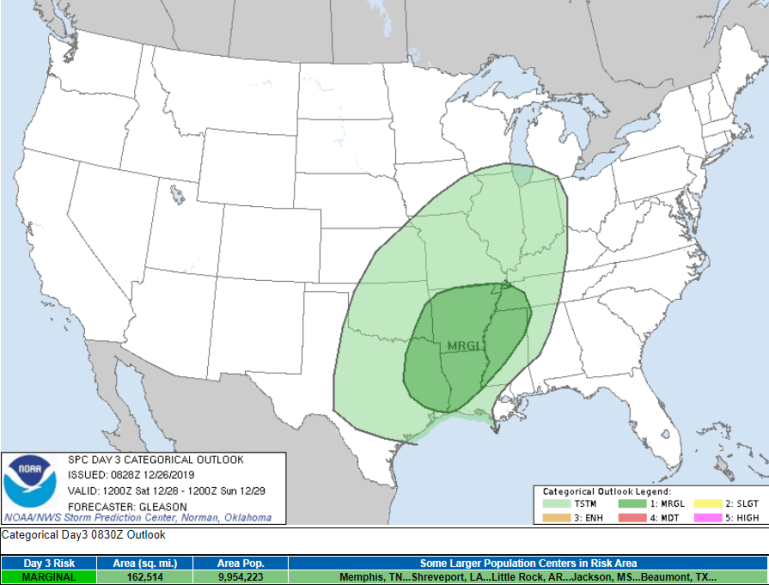 We should get into the “dry” slot of the storm Saturday evening and night so the rain should shut down.

Then a cold front will move through Sunday morning. This is where the “baby” storm comes into play. Some data from last night and this morning shows this baby storm creating a fast moving surface system that would interact with the colder air coming into our region on Sunday and create a new area of snow on the back side. The data has this SE of KC (mostly).

Sort of a weird situation…but the NAM model and the EURO both have something trying to develop and perhaps something with accumulations…so in areas where the temperatures are warmer today…could be the area that has some sticking snow Sunday PM.

Then we’ll be chillier next week but moderate towards New Years Day.

Our feature photo today is from ‎Mary Jo Seever‎ who went to the river near Atchison to snap this picture of eagles! She saw 19 overall yesterday 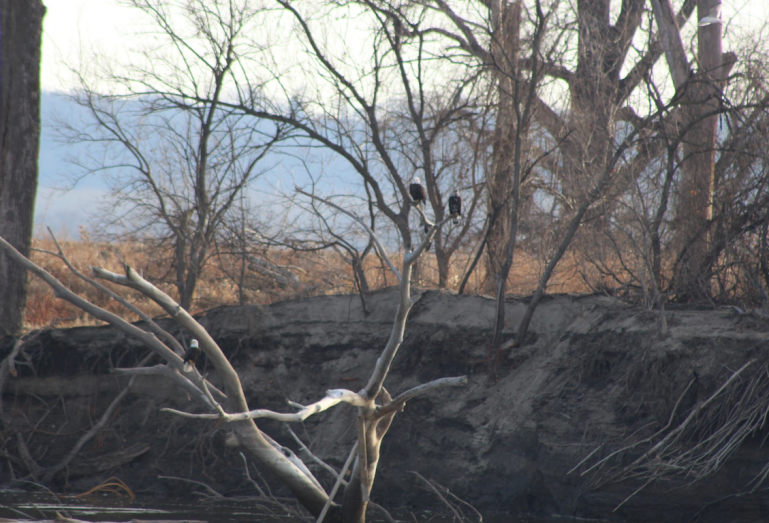 Larger hail remains to be the main threat for us with storms that develop overnight. Our window for severe weather will diminish over the next couple of hours, though. Some areas may not get any rain at all overnight and will wake up to warm and humid conditions as the wind picks up significantly. Joe's latest podcast: If you run a private business, especially if you rely on specific weather…