Good Thursday…in a weird way the grass sort of needed a drink of water and mostly it got it across a good chunk of the region. Some didn’t get much at all but others had well over 2″…mostly towards the south side. There were some interesting storms on radar…including two particular times that we’ll discuss in the blog today.

Cooler weather has moved into the region and aside from perhaps a few isolated showers in the “heat” of the afternoon and early evening…not much is expected and the data today shows that the holiday weekend is shaping up to be mild and dry too.

Today: Partly cloudy and cooler with highs in the 50s to near 60°. There may be an isolated PM shower

Tonight: IF there is any activity that moves/fades away and it will be chillier with lows near 40° and some 30s are possible towards daybreak as well. Some may have some patchy frost.

Friday: Nice and pleasant with highs in the low to middle 60s

This weekend: Milder with highs in the 70s

Overall yesterday turned into mostly what was expected. Some severe thunderstorm warnings…some 1″ hail reports…not many wind reports and some locally heavy rains.

There were a decent number of severe thunderstorm warnings…and things got going between 5-7PM…then there was a noticeable lull before the front hit the region and as we say…there was “sunset” magic and boom storms re-fired right at sunset and we had more activity and more widespread activity from 8:30>1AM. 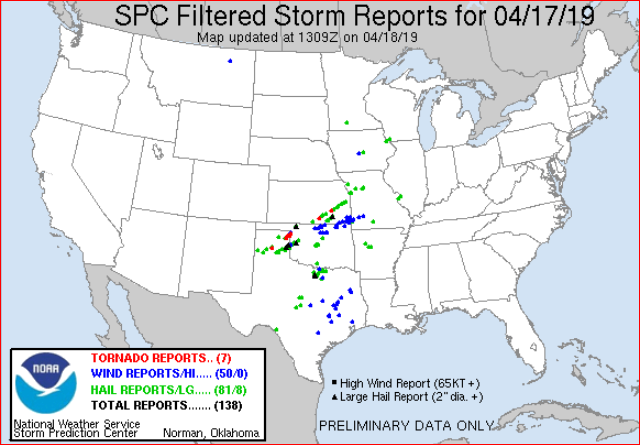 and a closer up map… 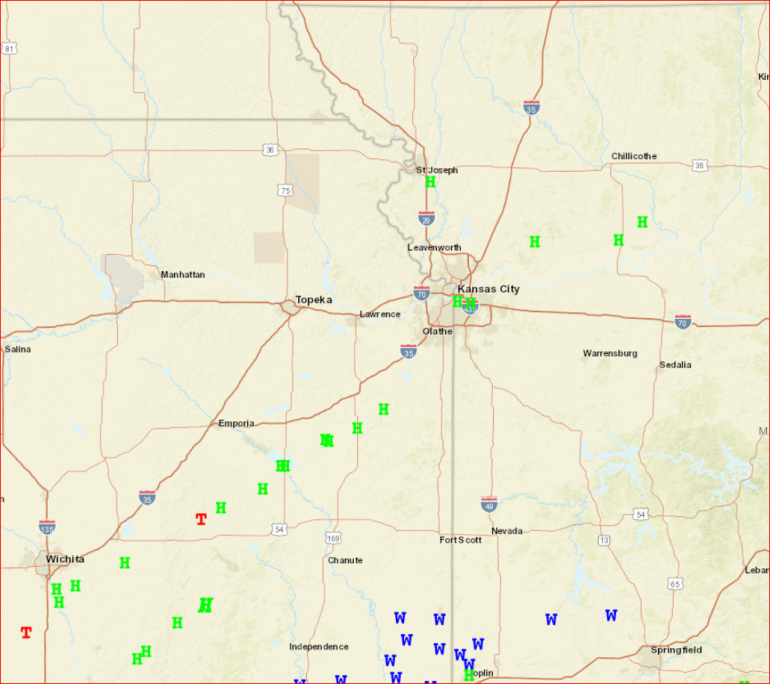 For the KC metro…few, if any, wind reports of significance. The hail reports were in the late afternoon around KC…so all that evening activity didn’t create any severe weather within the metro at least.

The storms that did produce hail in the late afternoon…were interesting to look at on radar. There was a small part of Jackson Co that did have some larger hail. Some ping pong ball sized hail was reported towards Troost and Rockhurst and also south of the “K”.

When looking at radar as that happened…there was an interesting signature showing up…something referred to as a “flying eagle”. I’ve seen these signatures before but don’t remember seeing one recently within the KC Metro. Maybe I just didn’t notice it in the past but I noticed it yesterday. It is more commonly referred to as a “V”-notch because IF you use your imagination you sort of see a V.

Don't see these that often coming through the Metro… #flyingeagle signature in the radar returns. Description courtesy of @USTornadoes JL pic.twitter.com/7FxLaotnqk

The folks from ustornadoes.com have a good explainer.

The V-Notch, or “Flying Eagle”

This radar signature does not necessarily foretell a tornado like the previous signatures, but it is usually only seen with the strongest and tallest of supercells, characteristics that correlate with those more likely to be tornadic.

The v-notch, also called the “flying eagle,” is a v-like pattern seen in the upper part of the precipitation shield (usually northeast of the hook echo area of the storm). This v-pattern occurs when the updraft of the storm is so strong, and the cloud itself is so tall, that upper level winds are forced to be deflected around the core of the storm effectively spreading the precipitation outward. A very cool signature if you see it on radar!

One note…IF that would’ve happened along the interstate as rush hour was evolving that would’ve been a MESS. Folks would’ve blocked up the roads under the overpasses to shield their cars from the hail and that would not have worked out well.

The stronger storms were towards the SW of KC. One storm towards Franklin/Anderson Co was rotating and prompted a precautionary tornado warning down there just after 9PM. At 9:30 there was a funnel cloud report towards the Richmond, KS area…but as far as I know there were no touchdowns and no wind damage.

That was when you are in the thunderstorm mode…that you switch gears and go into tornado mode while you’re on the air. It’s essentially going from 10 MPH to 60 MPH in a minute or two.

The whole time this was a “doppler” indicated suspicious area. So you have to be careful with the wording you use. There was no reports of anything overly concerning for a long time but by the same token you don’t want folks there to ignore what was happening. At the same time I’ve seen better “looks” to the radar so I didn’t want to overly play my hand…and again still get folks to a safe place IF they were in the warning itself. Sometimes it’s a delicate balance. Plus this was a sparsely populated area mostly since it was between Ottawa and Garnett.

Lots of lightning with all of this.

No severe weather is expected for awhile for us it appears…well watch the middle of next week just in case. Today the threat is down to the south…

and there may be some nasty tornadoes down thee too (again).

Tomorrow that risk shifts towards the east.

Overall the next work week will need to be monitored for heavy rain potential. There are signs that a front may stall near the KC region and that is a heavy rain set-up in the spring and summer months. We’ll see about how that plays out.

The feature photo comes from B_C on twitter at BCameron_wx