It’s Saturday and once again the feel outside is lurching back to springtime…dew points are increasing…temperatures are warming up to April levels and the winds will be increasing as well as the day moves along. There is a risk of thunderstorms too…and a random strong wind gust isn’t out of the question later today.

Tomorrow though will see a return to more seasonable conditions as a cold front comes through. Nothing crazy…the storm in the Plains is not really tapping into any strong cold air…that is up towards Canada and especially Alaska.

Today: Mild and windy with increasing rain chances this afternoon and early this evening. There may be some fast moving downpours and some thunderstorms too. Temperatures warming up into the upper 50s or so.

Tonight: Variable clouds and breezy. Mild into the pre-dawn hours (50s) but dropping a bit towards daybreak

Tomorrow: Cloudy and somewhat blustery with steady to falling temperatures into the 35-40° range

Monday: Mostly cloudy and windy with temperatures in the mid 30s

It’s an interesting storm for sure…and it’s effects on our area will be varied…ranging from increasing winds and temperatures…to storms…to a dry slot…to colder weather wrapping into the region tomorrow.

In all honesty…there isn’t a lot happening this morning. There have been some scattered fast moving showers out there, especially on the north side of the Metro.

The better rains are out in the central and western Plains…

Some heavy rains out there…

The KS Mesonet shows rain tallies in the last 24 hours (till 9AM this morning) in excess of 1.5″ with some near 2″ totals out there…big soakers…which is interesting because last night I showed how parts of KS are actually dealing with drought conditions. 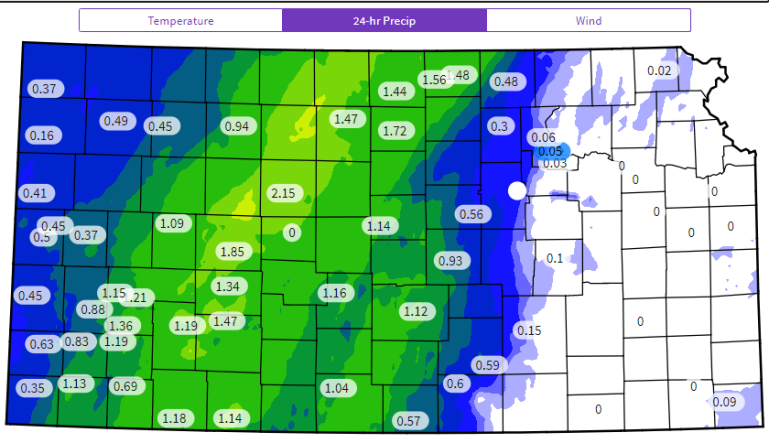 Note the drought report from this past week for Kansas… 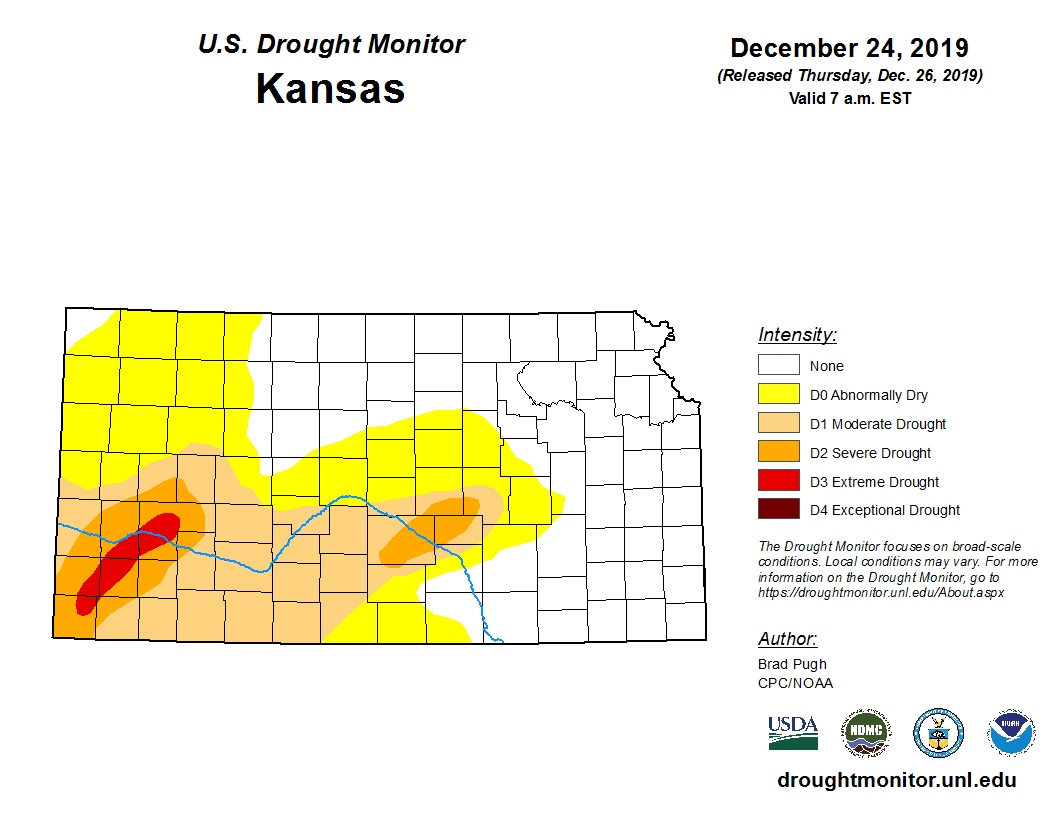 Some small areas of severe to extreme drought conditions out there…as close as near the Wichita area.

The storm creating the rains is actually developing now (at the surface) down across the Plains. The next map shows the isobars…the pressure contours here at the surface…they are in millibars…roughly 1012 mbs equals a barometer reading of 29.88″…1000 mbs equals 29.53″

The storm will continue to evolve today and come into eastern KS this evening and overnight.

Ahead of the storm…SE/S winds will continue to bring up moisture from the south and warmth as well….here  is the 9AM map…temperatures are in RED.

Already upper 50s to near 60° temperatures are in SE KS.

A lot of cloud cover is being generated by all of this as well.

Towards the colder side of the storm…snow is likely to be heavy…and numerous winter storm warnings are in effect for the upper Midwest and the northern Plains.

The snow forecasts up there are impressive… 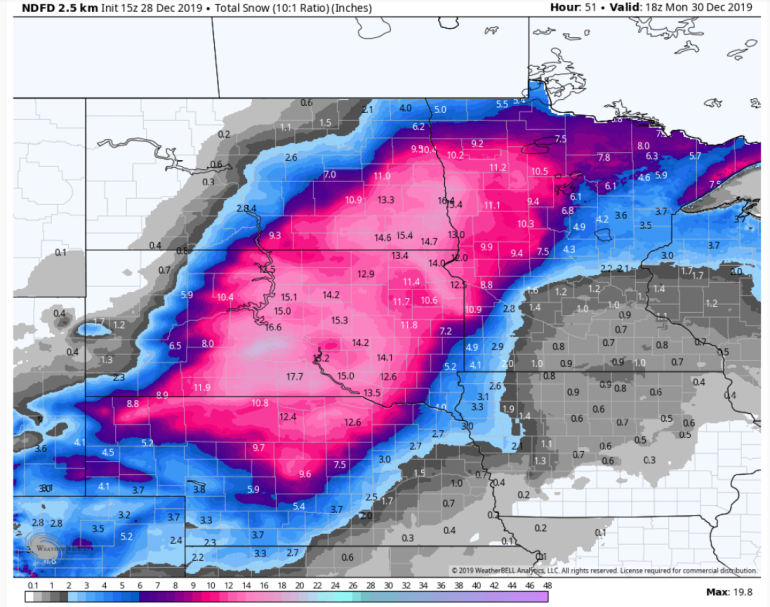 So what about us…

Well the rains out west will come eastbound in time…and storms are possible…they will be fast movers though…why?

Well the winds aloft are going to be cranking…50-60 MPH or so…so there is a lot of pushing happening to the storms later today.

The other issue that could happen…and I referred to this a couple of times last night…is the chance of a few stronger wind gusts from a few of the cells. This will be the result of some atmospheric churning with the convection in the atmosphere.

IF the winds are strong aloft…and there are fast moving thunderstorms…on occasion some of the stronger winds will “come on down” because of the heavy downpours. So a random severe thunderstorm warning could be issued for the bare minimum criteria of severe winds (60 MPH).

The morning SPC forecast increased the risk south of KC into the “slight” category. 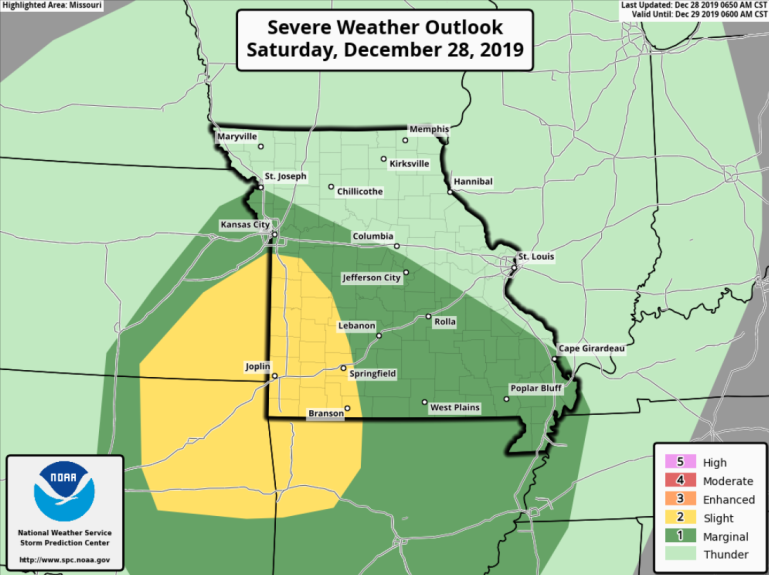 Whatever forms will be moving towards the NNE at close to 55 MPH…so quick hitters.

Then tomorrow the colder air will wrap around and into the KC area behind the storm. It’s not crazy cold though…just seasonal cold…and will send temperatures back into the 30s with blustery conditions continuing. There is the potential of some wrap around flurries or even light snows across the area, especially northern MO

Our feature photo comes from Chris Love of a fog enshrouded tree…. 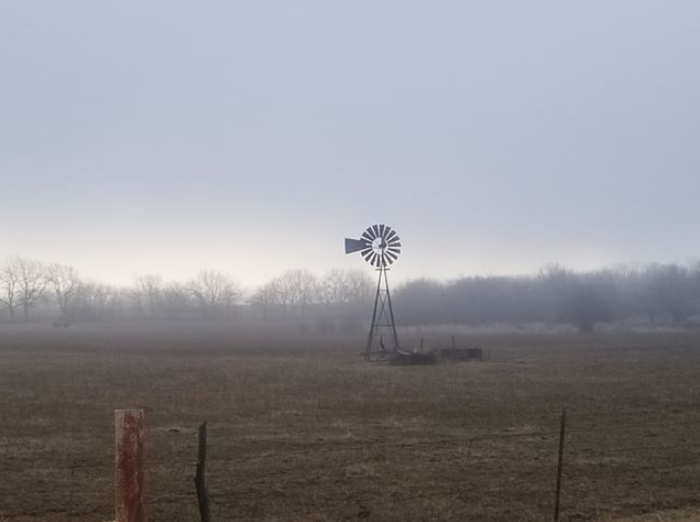