It’s Monday and the weather is changing again. After a mild, of sorts, weekend…things will be returning back to December like weather again with falling temperatures…increasing winds…and blustery conditions. This change will happen mostly precipitation free it appears and the sun will be out this afternoon at some point with clearing skies.

It’s a brief incursion of colder weather as temperatures will again mostly be near to above average heading through the rest of the week into the weekend.

There is a snow system that we’ll be tracking for next Sunday and/or Monday. Too early to get too excited, if your a snow lover, but it’s a chance right now in a pretty lengthy time that there was no chance.

Today: Our 12AM high of 49° will be the high for the day. As I type this we’re at 47° and it’s going down from here today. Blustery NW winds of 20-30 MPH will signal the arrival of the colder air with dropping temperatures and wind chills. By the end of the day with sunshine we should be closer to 25-30° with wind chills in the teens.

Tomorrow: Not too bad…typical for December with highs back into the mid 30s

I’ll be taking some time off later this week into the middle of next week…not going anywhere so I’ll get a few blogs together for you…especially if the snow scenario later in the weekend has potential…but after today…through Saturday…it appears as though the weather will be pretty uneventful for a few days.

Today though…eventful…thanks to a cold front coming through the region.

We have some mist out there now…as of 8AM…with some fog. Nothing too crazy. Colder air will sweep all that away over the next few hours.

You can see how temperatures are changing over the past 24 hours via this chart from Penn State. Notice the drops in the Plains and upper Midwest.

Temperatures in NE are in the 10° range.

But for as quickly as the cold air moves into the region…it starts to move out…tonight.

Our surface winds will relax this evening then turn towards the SW overnight into tomorrow AM. We should still drop into the teens though…but might hold sort of steady before daybreak.

Farther north…pretty darn cold in the eastern Dakotas. Some -10 to -20° readings at 8AM up there in ND.

We did enjoy some milder weather over the weekend…around 51° both Saturday and Sunday…and today will go down with a high of 49°…so aside from the 1st day and the 2nd day of the month…I think every other day has featured highs above average…tomorrow won’t get there though…but then we should be good to go for the rest of the week into Saturday at least.

As far as the potential snow later this weekend.

We’ll see but the model data has been showing this for the last few runs…the EURO and the GFS both have something cooking…the Canadian isn’t as aggressive but has something on Sunday near and south of KC.

It will depend on a couple of things…oozing cold air draining to the south and how far south it gets…and the ability of some sort of wave to come out from the Rockies and help get lift going into the Plains creating snow or a rain to snow scenario.

The EURO model has classic snowstorm of sorts locally…the GFS is trying too but has a somewhat different and not as intense wave coming through the Plains. It’s really not worth getting more involved in that at this point but for fun I’ve sort of identified the wave’s location this morning using reverse tracking…seeing where the model has it next Monday and going back from there.

It appears as if it’s some sort of combination of disturbances…one from out towards Russia and the other piece up towards the north of Alaska. By Thursday they will dance around together southwest of the Aleutian Islands and then sort of combine/merge across the northern Pacific Ocean and come ashore into the western US on Saturday.

Again that’s a lot of work and combining and dancing that needs to happen. I can’t really even trace how the GFS is trying to accomplish this system right now.

To be fair the EURO ensembles, while having something isn’t nearly as bullish with totals as the operational model.

More on that as the week moves along.

Our feature photo comes from Nick Arnold in the Smithville area… 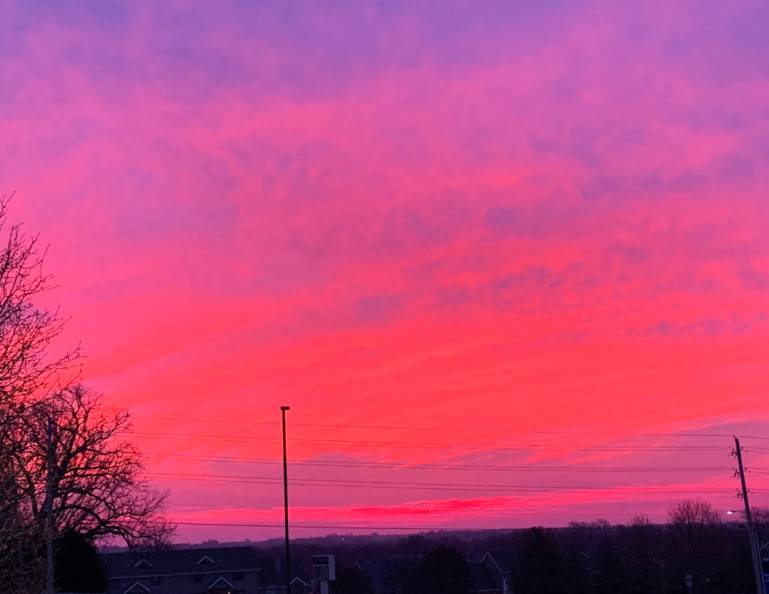 Once again, we've seen a few areas with cloud cover sticking around and limiting our temperatures to warm up in the afternoon. We managed to get to 60 today. We'll get closer to 70 on Monday after we fight some early cloud cover and drizzle as well in a few areas. Temperatures are significantly warmer Tuesday and Wednesday before our next cold front arrives. Joe's latest podcast: If you run…