It’s Thursday and I will be spending part of my afternoon doing a school presentation on weather. Sort of a mini-version of our School Day show. In partnership with BAYER I’ll be talking to 5th graders today about severe weather…the water cycle…how we create the “magic” of TV and doing 4 experiments. It’s my 1st presentation with a different “format” than what I’ve done for many years…as a matter of fact I’ve done almost the same presentation for the last 30 years or so…so I’m looking forward to trying to do something else.

Hopefully the kids will enjoy the show. It’s also a reminder that if you’re an elementary school teacher of 3rd-5th graders, feel free to contact me here on the blog or through facebook for more information and to see if we can schedule something in the springtime (or earlier).

Our weather is still the same…hot and humid through tomorrow it appears. Rain will be scattered today/tomorrow but increase in coverage over the weekend.

Today: Partly cloudy and hot. There may be a few isolated storms/showers north of KC. Highs near 90° from KC southwards and not as hot north of KC.

Tonight: Fair skies and warm with lows near 70°

Tomorrow: Warm and muggy through the middle of the day with a few additional storms possible in the afternoon…probably after 2-3PM or so. Highs in the mid-upper 80s but may drop a few degrees later in the day

Saturday: Iffy day with off and on rain/storms. There may be occasional dry hours mixed in as well. Highs in the 70s. Storms increase at night into Sunday AM

Sunday:  Wet morning…that may linger into at least part of the afternoon. Cooler overall with highs in the mid 70s although there is some data that shows even cooler weather in the afternoon depending on the rain situation and how long it lasts.

So in keeping with the theme this month (so far)…we’re running almost 6° above average for September.

IF the month ended today this would be the 5th warmest September in KC weather history. 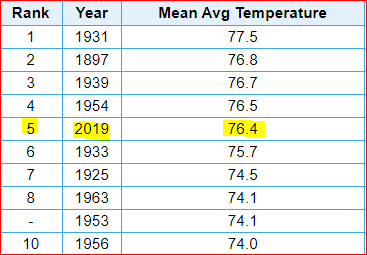 but since the month doesn’t end today…and just looking and comparing all the years from 9/1-9/18…this is the warmest start to September since 1990…and the 17th warmest start on record going back to the 1880s. 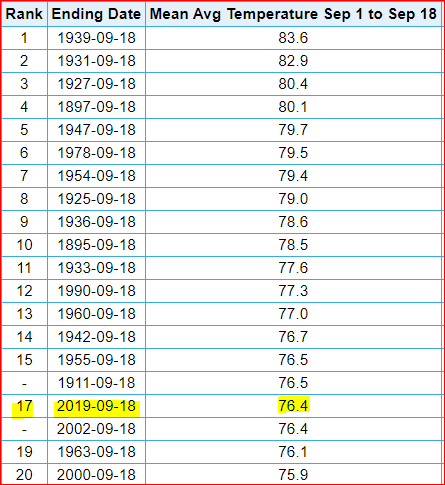 My goodness look at the top couple of years…now that was warm!

Overall though the pattern favors warmth more than coolness for the rest of the month. Perhaps not to the extent of what we’ve been seeing all week so far (near 90°) but still overall mild.

This takes us through the last week of September into early October.

Can’t help but wonder if there is more severe weather coming our way down the road…when we start transitioning out of this warm pattern overall…not sure when but at some point perhaps in October.

The western US though will continue to see cooler weather overall while the central and eastern part (especially the east) is very mild to warm heading into the new month.

The EURO ensembles show this idea up at around 5,000 feet or so. This is for the last couple of days of September through the 3rd. It’s a average of 5 days of temperatures. 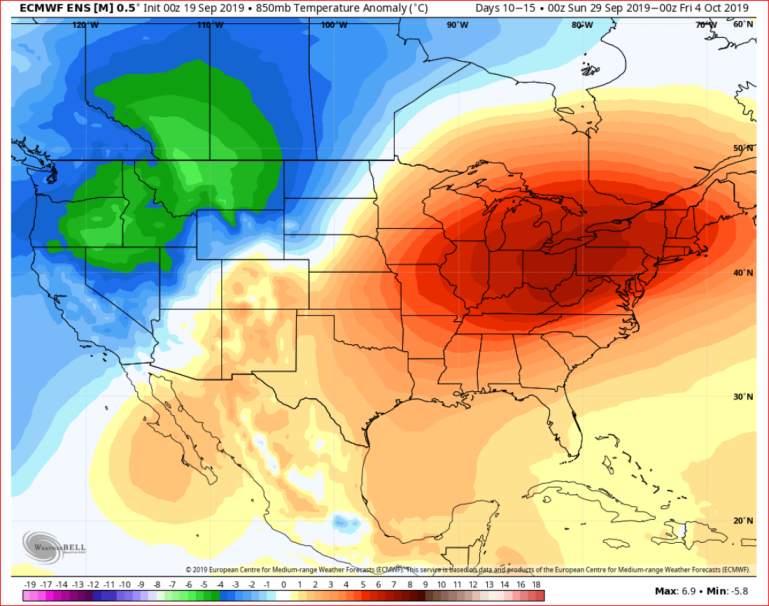 Even the GFS is pretty much in lockstep with this idea as well. 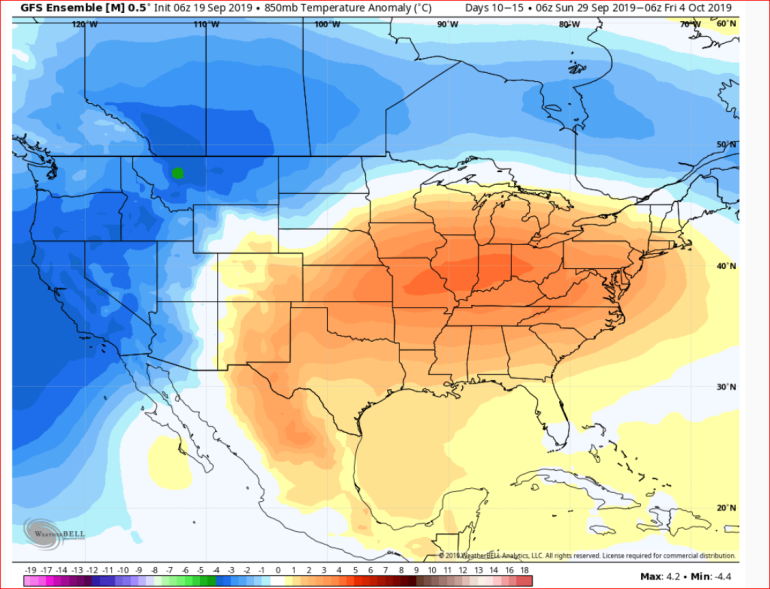 So that is the big picture stuff…

Now the forecast issues for the weekend.

Let’s start with today…there is a weakening outflow boundary across far northern MO drifting south. We may start to see an increase in clouds as the morning moves along…this may keep us from 90° today on the north side at least IF those clouds hang around long enough.

It’s possible there may be a few pop-ups as well later this afternoon just about anywhere from KC northwards. Here is the satellite loop that should update automatically for the rest of the day

Now tomorrow…and that will be determined by some moisture down towards Texas…which has been inundated in eastern parts of the state. There are some 40″ totals coming in from the remains of whatever was Imelda down there. Some places have had 3 FEET of rain in the last day and a half.

Some eye popping totals SW of the Beaumont, TX  Metro…over 40″! 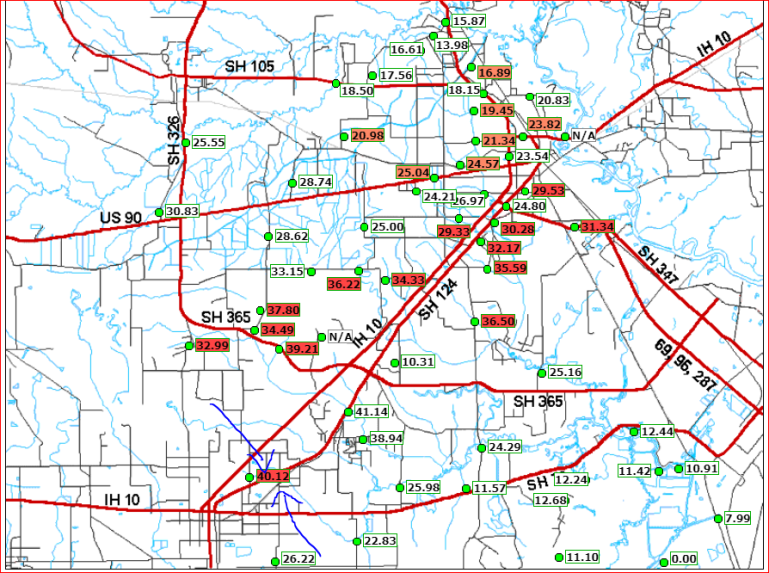 Areas NE of Houston are also getting pounded with crazy rain amounts as well. 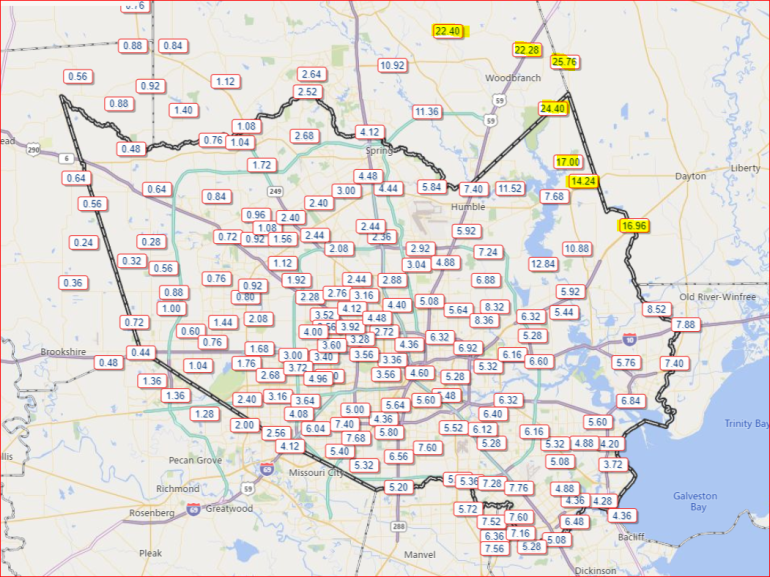 I’m still not totally convinced on much rain tomorrow…but some of that moisture and a remnant piece of the system down there may come NEwards up towards our area…with the building morning heat and the humidity and since we’ll be uncapped (assuming we get to the mid 80s or higher) a few more storms may pop.

Then there is the weekend…

It will rain…and it may rain a lot in places…saturated air (as mentioned and detailed yesterday) with a front getting closer on Sunday and various weak disturbances coming up from the SW and WSW…all spell rain chances.

Perhaps not continuous though and there may well be some breaks in the rain between waves (which can’t really be timed well yet) but there will be rain.

Odds favor 2-4″ for many areas..with upside in some areas.

The NOAA forecast has this… 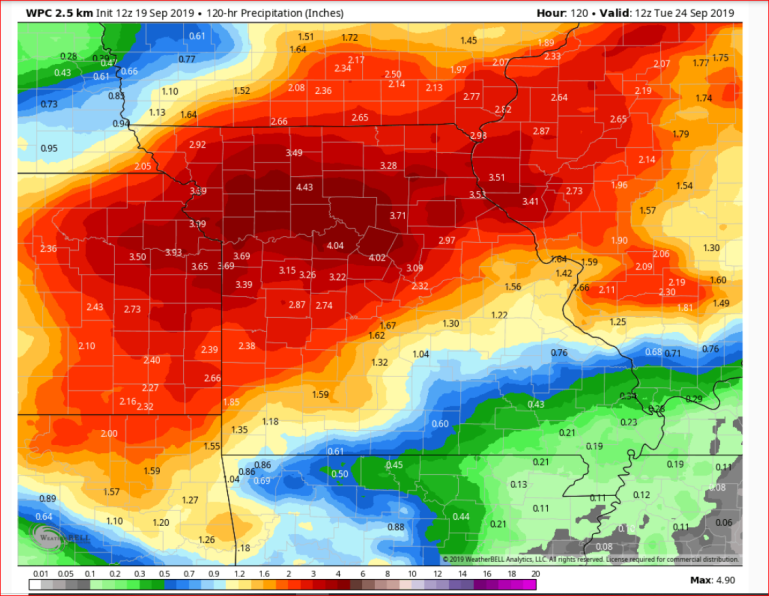 It’s possible that we could dry out for the game itself…or at least by halftime…we need this soon-to-be front move through the area fast enough…preferably before 9AM…but some data shows the front not pushing through till the 1st half of the game which means lingering rains possible for the game itself…at least through 2PM or so…again have that rain gear ready to go for both Saturday and Sunday.

There is just so much moisture in the atmosphere through the early part of Sunday afternoon that it won’t take much at all to create rain over the weekend…any little weak disturbance coming into that tropical-laden air will create rain (sometimes heavy). Would I be shocked if some get 5″…nope.

Obviously flash flooding will be a risk over the weekend especially later Saturday night into Sunday.

OK that’s it for today! 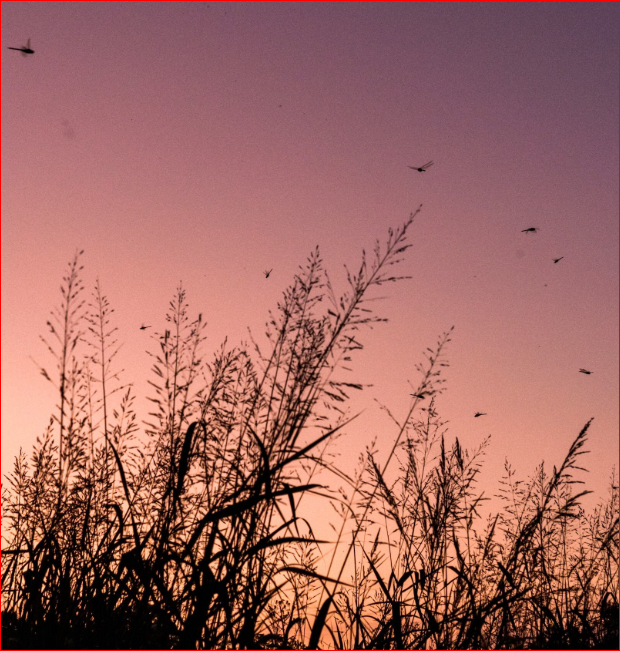