The holiday weekend is about to get going and Mother Nature may start shaking up our weather just a little bit heading into the weekend. This morning we’ve already seen some locally heavy rains on the northside of the Metro and with the flow in the atmosphere being so weak and nondescript the pop-ups that form in somewhat random fashion will dump some pretty good rain on some of you. The issue is the somewhat sparse coverage at this point…we’ll see about expanding that coverage a bit heading into the weekend.

Today: Partly cloudy and seasonable with highs in the 85-90° range. Storms are possible north of I-70 this morning and area wide later today and early this evening. The rain chance today appears to be higher than it has been lately

Thursday: We do it again…highs in the upper 80s

Friday>Sunday: More of the same with somewhat higher chances FRI>SAT especially. Highs in the 80s and lows near 70°

For some of you this will be the last blog you read until next week. I will get a few updates out between today and Monday…

With that said our mostly “dry” forecast is going to be changing and while we’re drying out (at least the grass is) and while we are seeing some pretty good cracks develop in the ground (typical of the heavy clay soil) after more than a week without significant moisture things may start getting a bit wetter.

The thing about summer storms though, unless we see a whole complex of storms come from the west or northwest…is that many times they can affect only sparse areas because the coverage isn’t so extensive. They will typically last about 15-30 minutes or so and rain themselves out.

Last night on the news, I put together a quick graphic and referred to the old shampoo commercial…

The part that I was keying on was the “and so on and so on” part…because the same works for summer storms.

One storm will pop and fall apart within about 30 minutes…but it pushes out a rain cooled airmass called an “outflow boundary”. This then acts as sort of a mini cold front and pushes away from the storm that initially created it…usually in a circular fashion. Sometimes they’re full circles…sometimes half circles…sometimes something in between. Anyway these “outflows” interact with the hot air that they are colliding with and that acts to serve as a new “focus” and boom you get new cells popping…and then those new cells create more outflow air and then another area of new cells can pop, often well away from the initial storm. That’s the “and so on and so on” part of the summer storm cycle.

This morning radar shows cells out there and just by looking at the clouds at daybreak I could sense that things this morning are a bit “different” than the last 10 days or so…hence the reason why there may be a bit more coverage to the storms today.

There is also a disturbance in southern KS that will need to be watched because that is sending out some rain cooled air and it’s south of the Metro…that too can pop some more storms later today. So we’re in a weird area right now where storms are somewhat more likely than they have been over the last week or so…and yet here I am dragging the sprinkler around this morning because I can’t promise a ton of coverage to the future storms. These areas can be enhanced as weak little MCV’s form. An MCV is a Mesoscale Convective Vortex and they represent little disturbances that spin around…helping to enhance lift into an unstable atmosphere. They have minds of their own usually in terms of where they move towards and how long they hold together. Sometimes they can linger for 1-2 days and travel 100s of miles…sometimes they linger for less than a day and travel only a few counties…sometimes they just waffle around and fall apart and don’t move much at all…

The perils of storms in the summer I guess. So that is where we are.

It’s not worth cancelling outdoor plans for at this point…because pinpointing which county or counties will be affected is fools gold at this point…but over the next few days…some will see over 1-2″ of rain while others see next to nothing it appears. Again that’s the luck of the draw when it comes to summer weather usually here and elsewhere. Here it the short term model called the HRRR to get you through…it’s been overzealous with the storms lately but after a while it tries to figure things out. This model will auto-update for you and remember for timing purposes…12Z is 7AM…18Z is 1PM 00Z is 7PM and 06Z is 1AM…and everything in-between.

What is subtly changing above us, at least through Saturday is that there is a bit more of an east to west flow…allowing potential future disturbances to migrate closer to the KC region through Saturday at least. That too can help generate some additional coverage of the storms. It appears that this flow will again lift northwards early next week reducing to eliminating the risk of storms again for a few days (and allowing for hotter temperatures again).

With the added rain risks/clouds…we may be more in the 80s as opposed to the run of 90+ we’ve had since last week..6 straight days may end today up towards KCI…and we may be done with the 90s officially in KC till early next week (maybe).

I don’t think it’s a super duper widespread wet pattern for the next 10 days..but it should be somewhat wetter compared to the last 9 days or so. 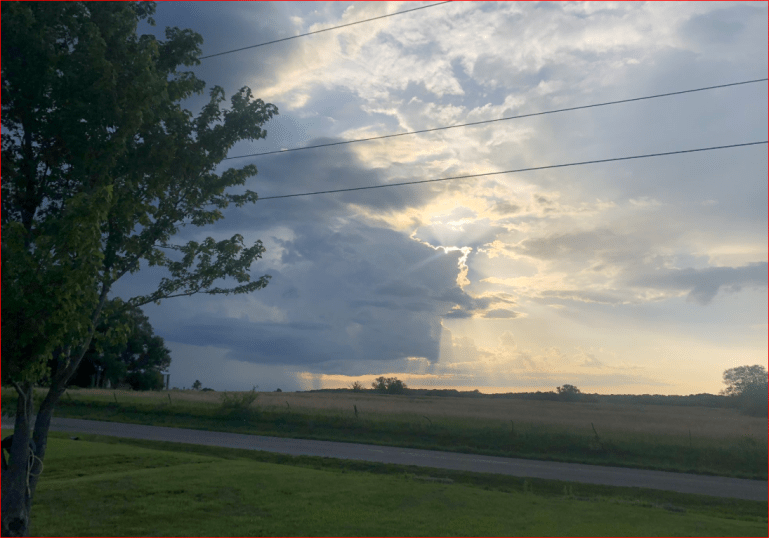 Have a great holiday…