It’s been a pretty good week of weather around these parts…lots of 50s and yesterday…60s. Today is a jolt back to reality but really we’re talking about just a seasonable day in KC. A cold front came through after 12AM this morning…winds were going pretty good last night and those winds helped to bring the more seasonable air into the area.

Over the weekend the forecast is somewhat complicated. On one hand we should see a nice warm-up…and I’m expecting above average highs into Sunday. On the other hand…clouds on Sunday could remain a big factor…in preventing temperatures from reaching their full potential. IF there were no clouds…I’d say a run towards 60° would be possible. With clouds though…50° or so could be about it. There should be some wind as well to make it “feel” cooler.

A stronger push of cold air will come on Monday and linger for a couple of days next week as well but the pattern will quickly relax after Wednesday in the Plains and with no snow cover around…we should moderate nicely.

Today: Partly cloudy and colder. It will be about 20° colder than yesterday but again just more typical of early December. The winds are dying off as well. Highs around 40°

Tomorrow: Mostly sunny and cool with highs in the upper 40s

Sunday: Cloudy and breezy. Highs near 50°. It’s not out of the question there could be a few patches of drizzle around later in the day.

So we got snow in October…snow in November…and now not much. There is actually a chance of some snow at some point later Monday but right now it looks inconsequential in terms of amounts and from there there are no signs of anything too interesting next week at this point. The EURO model shows maybe something trying to stir towards mid month.

Overall not too exciting at this point for snow lovers.

Some historical thoughts as we head towards Christmas week…

What are the chances of a White Christmas? Well history suggests about a 1-4 or 5 chance. Although take a look at the next chart…this shows 1″ of snow on the ground on Christmas Day. 10 times over the past 37 years there has been at least 1″ of snow on the ground at KCI…that is the definition of a White Christmas..at least 1″ of snow. This is through really the night of the 24th. IF there was snow on the 25th to 1″ it wouldn’t be included in this data. So it’s not perfect data but it gets the idea out there.

The chances obviously trend downwards the farther south you go. For example towards Sedalia and Clinton the chances drop to about 8% 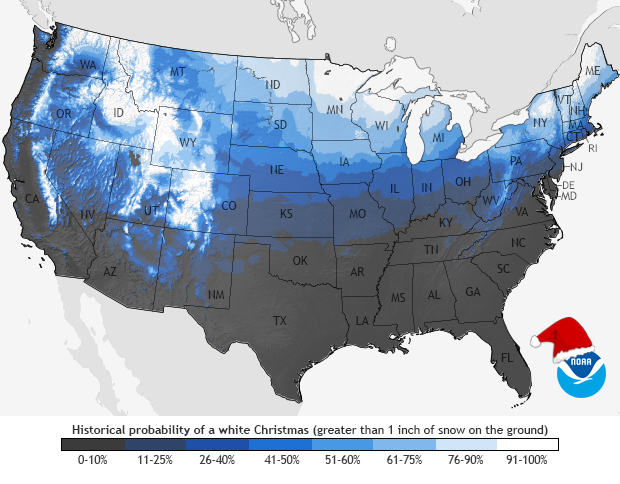 For northern MO the chances though increase. For example the Maryville area has about a 30% chance…Bethany weirdly has a 19% chance whereas KCI is at 23%. The St Joseph area has a 30% chance and Lawrence has a 16% chance. 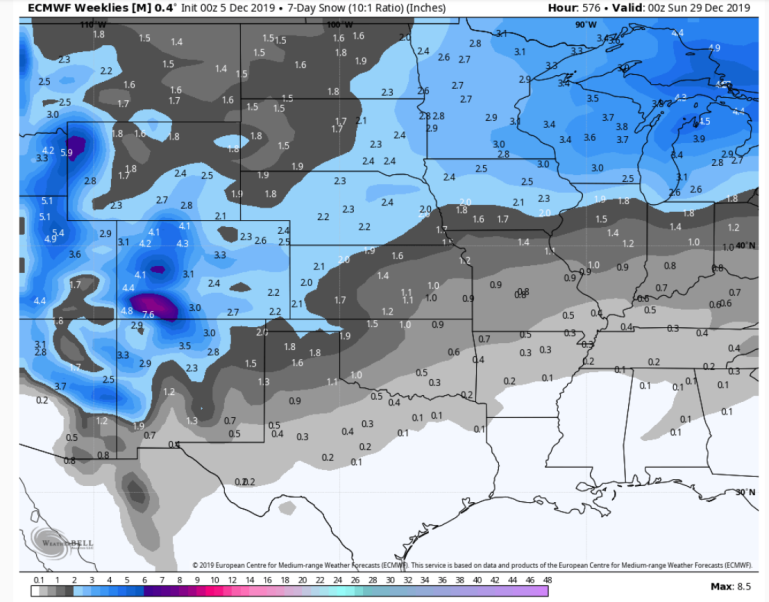 According to this model…the odds are more likely up towards the upper Midwest and the Plains north of KC into the Rockies. Historical odds are more in the 35-45% chance for that part of the Plains as well.

Back to our weather…I’ve blogged a bit about the weekend conundrum and a return of low level moisture especially on Sunday.

On Monday a cold front will slice into that moisture and should create at least some rain or snow. Mostly light though…worth monitoring just in case we get a scenario of wet roads with falling temperatures although that aspect looks very marginal. The real cold air won’t come in till later in the day it appears…

Tuesday into Wednesday will be cold for sure…we’ll dabble briefly in the arctic air but the main thrust is more towards the upper Midwest and Lakes region as mentioned for a few days. Tuesday and Wednesday highs though may only 30-35°. Sub-zero lows are going to be prevalent across the upper Midwest.

The feature photo of the day comes from Keri Williams…nice shot! 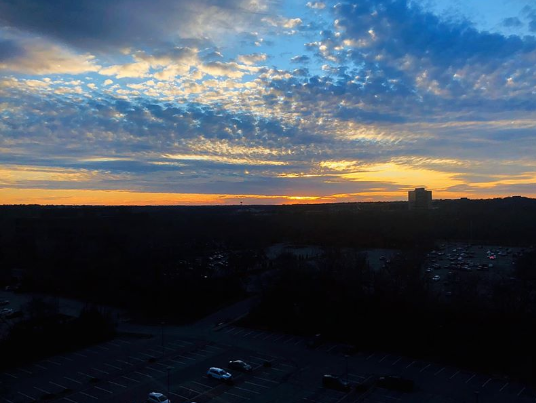 It's been a while since we've been able to see a comet in the skies without a telescope, but NEOWISE has provided some nice visuals over the last few days.  The problem is, if you're like me, you haven't been able/wanted to get up at 3-4 AM to see it. That will change for a few days this week as it's going to be visible at night! For a video…

I titled this article "Take 2" because a lot of you probably woke up and didn't see any rain and got mad at us. That's fine, we get it. The underlying reason a lot of you are upset is the lack of rain we've had recently. I'll try to explain briefly below, but you can watch my short video forecast for an explanation as well. The complex of thunderstorms that…

Heat is aiding venomous spiders’ push into our homes

US debates school reopening, WHO warns ‘no return to normal’

Heat is aiding venomous spiders’ push into our homes