Our Monday will be vastly different from the wonderful weekend weather we enjoyed. 65° Saturday and near 60° Sunday…couldn’t ask for anything better really. The colder air started to seep in yesterday evening…then plunged in overnight with some rain…and now snow breaking out on the northside (as of this writing). This snow will overspread the area this morning and as I wrote in yesterday’s blog…the main issue will be developing as the morning goes along with the increasing snow from the north to the south. Southside areas of KC will be waiting till about 9AM or longer for the snow to start sticking…the window is short though…so while amounts will be less than 1″ there may still be some impacts on the roads now that the temperatures are down to near 20°.

Today: Snowy AM then clearing out after lunch. Remaining windy today…we’ve already had gusts to 45 MPH this morning so what falls will blow all over the place and be tough to measure really. Temperatures are dropping to near 20° but may come up a couple of degrees when the sun comes out.

Tonight: Clear and breezy with lows down into the single digits to near 10°

Tomorrow: Sunny and cold with highs near 30°

Wednesday: Not as cold but still chilly with highs in the mid 40s but with SW winds of 20-30 MPH…it will feel cold.

On this date in 1911, what is now known as the "Great Blue Norther of 1911" brought an unbelievable change in the weather to much of the central U.S. including #OKwx and #ARwx. Several locations saw record highs in the afternoon, then reached record lows by midnight. pic.twitter.com/eWXmWPV2Ug

Historically, it's a big day for weather daily doubles. #OTD in 1911: The Great Blue Norther.

Ahead of the cold front, Oklahoma City set its record high for the date (83º). By midnight, temperatures had plummeted to 17º, setting a record low. Surface map from NOAA archives #okwx pic.twitter.com/6G2GlQVjbT

We may be close to that low again tomorrow morning.

All because of the cold front the slid through the region. Here is the 7AM surface map. Look for the temperatures in RED…lots of teens this morning in IA/NE. Also look for the **’s. That represents areas reporting light snow.

Radar this morning shows snow increasing on the northside that will shift towards the east south east.

Look at the winds as well at KCI with the temperature drop overnight. 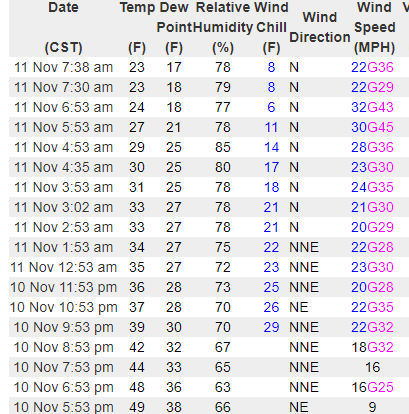 So I think today qualifies as “blustery”.

Snow amounts from these bands moving through won’t be heavy…but some areas, especially on the northside may see close to 1″ of very wind blown tough to measure snow. Odds are many fall below that though…but again the impacts on the roads may be a bigger issue depending on local circumstances.

By this afternoon the sun will come out and any road issues will rapidly improve despite the cold temperatures and the gusty winds.

This air mass coming through the states will be breaking 100s of records…whether they be record lows or record cold highs for a particular date.

The numbers indicate forecast lows or highs within 1° of the record. These are the potential records for Tuesday… 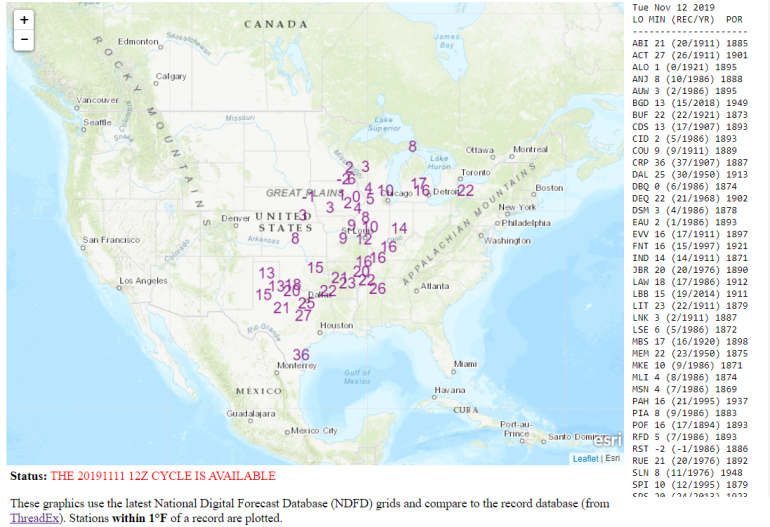 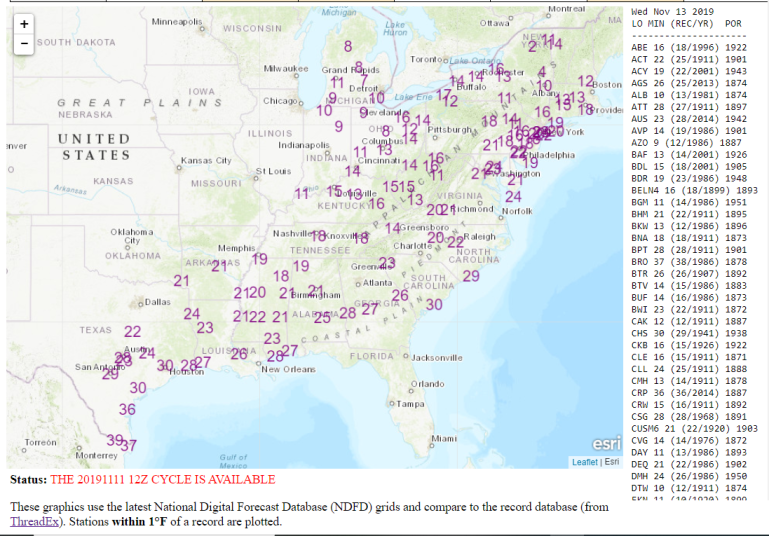 Overall this will be an impressive record breaking air mass.

Not much else is expected this week into the weekend with temperatures moderating as the week moves along. Maybe not 60s this weekend

Whatever happens this week…there are no strong cold fronts ahead after this one…and no strong storms for at least a week. The precip situation isn’t changing much…or lack thereof. Despite some snow today…it won’t amount to much in terms of actually moisture. There isn’t a lot of moisture coming our way overall though.

The good news is after this cold front with air created towards the arctic region…we’re breaking the arctic air mass connection for awhile. 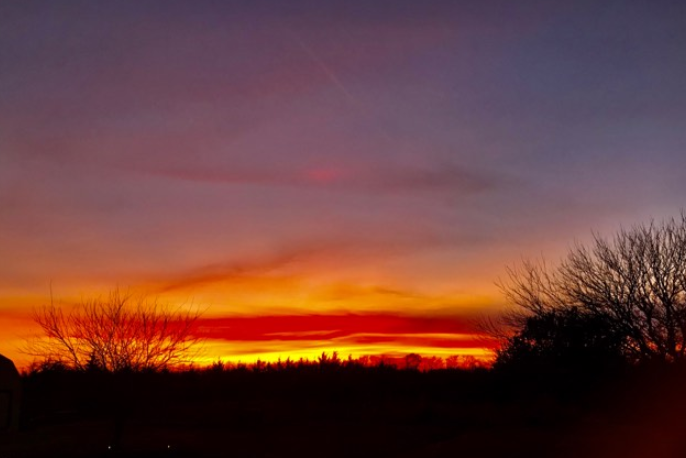 Protest turns violent in Ferguson after a day of peaceful marching