Happy Friday…the weather is going to remain cold through tomorrow really…and what happens later today is a bit complicated because whatever comes this way will be fighting some dry air below 8,000 feet but if whatever comes this way is strong enough it should overcome this layer. Temperatures will again struggle today but we should get well above freezing at the surface…so whatever falls will mostly melt (of it’s snow or a mix) at least through sunset and the evening rush…so right now I’m not expecting any issues on the roads through the PM rushhour.

The scenario on Tuesday is not really clear cut in my opinion. No reason not to at least still mention the chance of rain or a mix to snow…but how strong the system is and whether or not it can produce accumulating snow…is unknown at this point and remains as a watch situation really and that’s about it.

Today: Mostly cloudy and cold with highs in the upper 30s to near 40°. There may be some rain or mix>snow showers later this afternoon and early this evening. Roads should be fine for most of the day and into the early evening (perhaps wet though later on)

Tonight: Some mix showers may change over to snow. It won’t affect the whole area though and what falls will melt (a lot) but perhaps there may be some accums on grassy surfaces or perhaps IF the temperatures drop a few degrees we could see some slick spots develop on bridges and overpasses. Their may well be a burst of snow before daybreak as the upper level circulation comes right on top of the Metro.

Saturday: Clouds gradually break as the day goes along…cool with highs in the mid 40s

Sunday: Nice and the best day of the weekend with highs well into the 50s to near 60°

Sort of a messy forecast for today…

There is an upper level storm coming out of the Rockies and into the Plains…this is the same system that created heavy snows out in the AZ/NV area…as well as a significant hail storm in Phoenix and rain in the desert. You can see it on the far right side of the water vapor loop below.

You also notice that there is a “stretched” out look to the system and that there is a darker area in the imagery moving through the southern Plains…that is the dry slot.

IF that dry slot overspreads the area later today…we wont get much at all tonight. We may be affected by this overnight through 2AM…BUT then the upper level storm comes right on top of the area..and that could create a few snow bursts as it moves through before daybreak.

Radar is showing precip out west and southwest of KC…a combo of some rain and a wintry mix.

The 9AM surface map shows decent snow in western KS…and rain well to the south of here..but there is a lot of dry air undercutting into the Plains right now…the ** represent snow reports in purple and the ..’s are rain reports in green 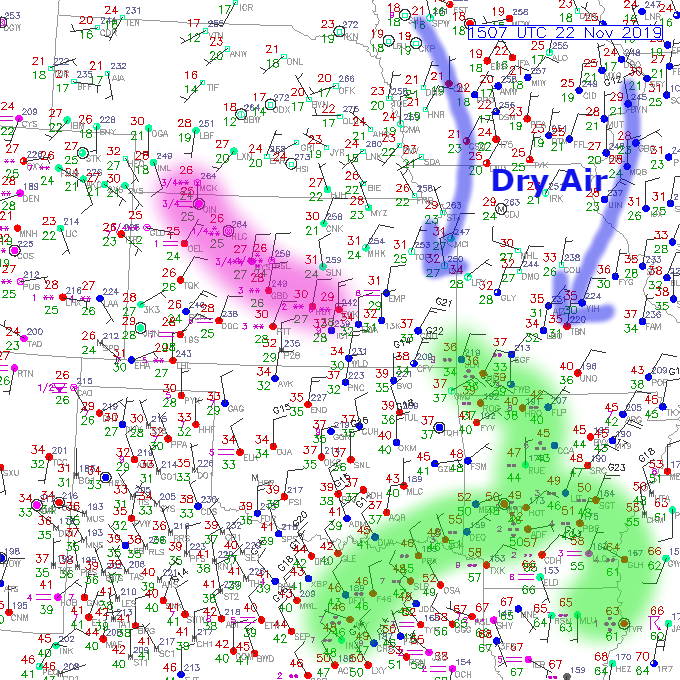 The type of precip we get later today will be more liquid/mix…then tonight IF there is still stuff falling it could be mix and or snow.

The issue isn’t how much of whatever we get…the issue could be IF the temperatures drop enough with whatever falls…dew points are in the 20s this morning so when stuff falls and initially evaporates it will drop the temperatures at the surface…and that will in time allow the bridges and overpasses especially to get colder. That means IF (still a big IF) it gets cold enough tonight…there may be a few slick spots where the bridges and overpasses are wet…this would be well after sunset I think.

Don’t cancel your evening plans at this point…it’s just something to pay attention too.

Tuesday is another thing…

This could still be a big nothing burger for us aside from some rain and maybe some flakes at the end…data overnight is more suggestive of snow in NW MO and NE KS with not much locally…but that aspect of whatever happens is only 75-100 miles away and I’m not hedging my bets on that outcome right now in totality at least.

We’re dealing with a system in the eastern Aleutian Islands that will be going through evolutions as it moves into far northern Canada and splits into pieces with one piece as a possible winter weather maker somewhere in the Plains…a lot of gyrations have to happen for KC to be targeted at this point. Could still happen…but again not something to hang your hat on from this far out.

Despite the somewhat dry weather for the past 7 weeks or so…we’ve obviously had a wet year…as a matter of fact we’ve had 110 days with at least .01″ of moisture…that’s the most since 1993 through yesterday’s date. 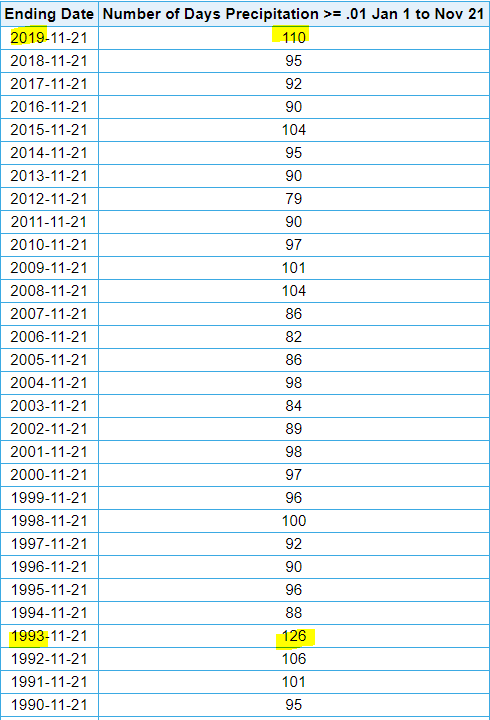 More on that perhaps on Sunday…no blog tomorrow unless there are big changes in the data for Tuesday. 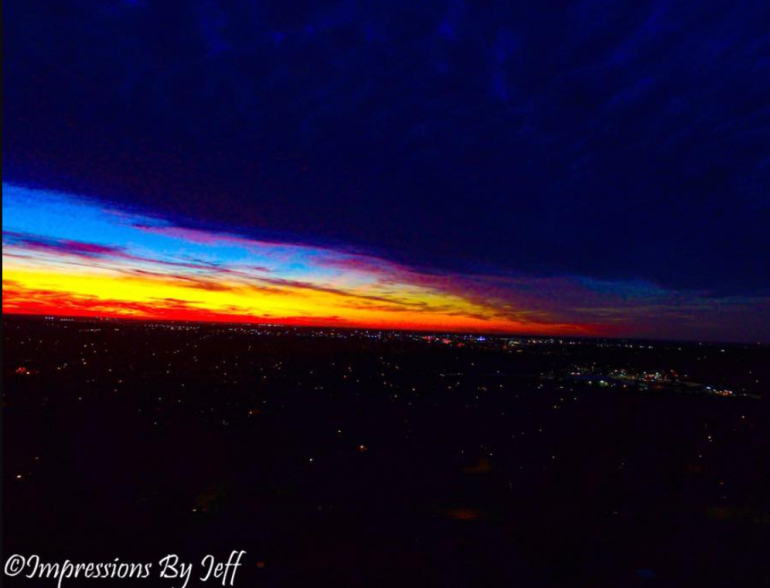