Boy the forecast models this morning just look plain ugly for the next 10 days or so. For those wanting a return to what happened late last week with the 70s and 80s, there is no hope for that anytime soon. Surely it will happen but the maps this AM are glaring in the amount of cold, to varying degrees, their indicating in the Plains and really for most of the country east of the Rockies.

This AM we’re seeing clearing skies off towards the west of the metro that will rapidly push through the metro over the next couple of hours and by lunch skies should be bright and sunny out there. Temperatures will respond nicely with the mid-March sun angle and should pop into the 50° territory. Average is about 56° for today. Tomorrow should be another day with highs near to above 50…that’s the good news.

The bad news is yet another wet storm will be taking shape across the country later in the week and while the timing is still a bit of a question, the time period of THU into FRI needs to be watched because yes the atmosphere should be supportive from a temperature standpoint to support the potential of snow in the region, and the models are responding with the snow forecasts. This is all connected to a large piece of energy off the coast of the SW Alaska coastline which will undergo several transitions before it gets into the Rockies area on Wednesday.

I don’t really want to get into too many specifics from this juncture but I do want you to pay attention to the potential because if it does come together it would be a major inconvenience. Here are some models to look at for the potential snow amounts.

First take a look at the EURO…

Now remember that late March can be a very fickle time in the Plains, severe weather to snowstorms are not that unusual, and since the atmosphere will be way to cold to support any chance of severe weather nearby, we’ll have to focus on the snow aspect. Temperatures will of course dictate the type of precip we get. Also remember that we’re coming to the anniversary of our biggest snowstorm ever in KC weather history. On 3/23-24 of 1912 25″ hit the metro. Also back on 3/18/84 we had a nasty ice storm as well. So weird things can happen later in the month of March.

Finally we got through the St Patrick’s Day parade in fine form. I was just thrilled that people didn’t throw tomatoes at me or boo me because of the crummy weather. It was tolerably cold for most of the parade and mostly dry till the last portion of the event then it started sleeting/raining a bit more and combined with the 35° weather turned rather unpleasant. Here is a picture of the gang out there having fun! 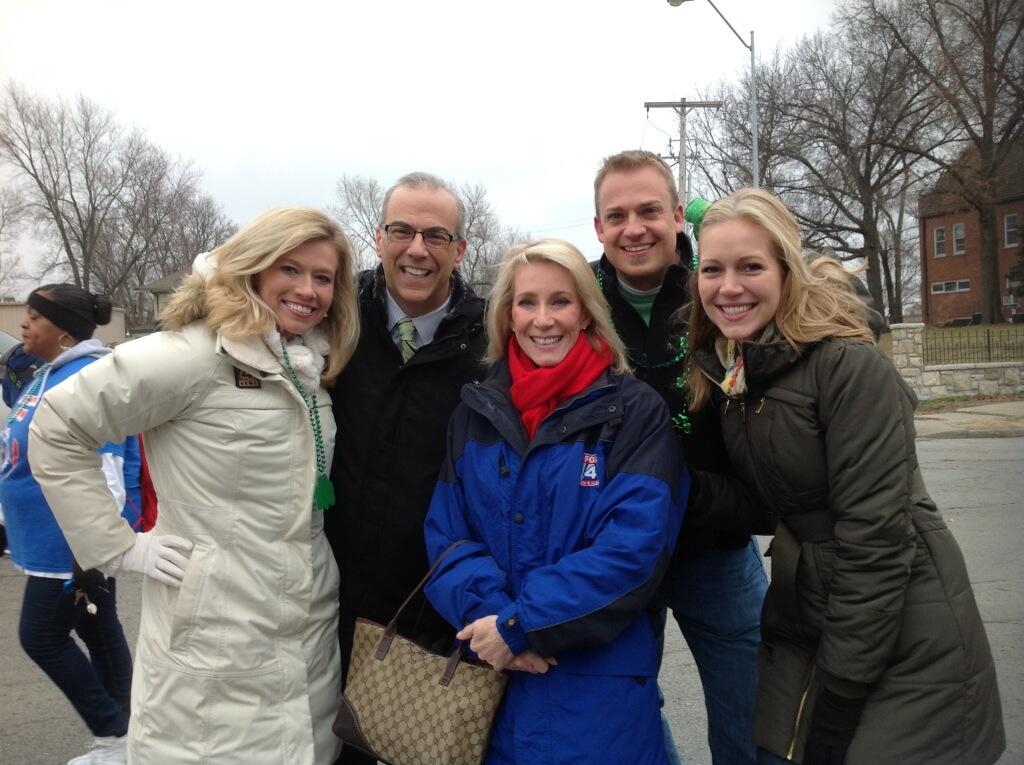 That’s Katie, yours truly, Susan, Bob, and Abby from l>r. We were bundled up but I was surprised that I didn’t feel colder. Lots of folks were waving and clapping for us so thanks for coming out and shivering for a couple of hours!

Have a great Monday and enjoy the sunshine. I should also mention that as soon as the sun comes out the winds will start to pick up out of the NW and 15-25 MPH

US unemployment unexpectedly drops more than 1% in May, levels still high

Protesters, ACLU sue President Trump over use of force at White House

US unemployment unexpectedly drops more than 1% in May, levels still high

Protesters, ACLU sue President Trump over use of force at White House