Well the afternoon has become sunny across the region, but our temperatures with the sunshine are still struggling at the noon hour. We’re up to 28° as of this writing and should tack on another 5-8° before the afternoon is over with so we’ll continue to melt some of the snowcover and it certainly has been a slow process to melt the snow with all the clouds over the last few days and the colder than average temperatures.

Here is a look at the snow depth recorded at KCI (official station for KC) since the 1st storm about 10 days ago. On that day, when the reading was taken around 6AM there was no snow on the ground…the next day there was 9″ on the ground after compacting the previous day’s heavy snow! Interesting to note that the snow melt has been pretty non-existent for the last couple of days. click on that image to make it larger!

The satellite pictures this afternoon show the clearing that has taken over the region, and with the clear skies we should drop off somewhat tonight. I’ve got 20° right now for a low, but I’m wondering if we could get a bit colder than that. There may be some additional clouds the move in overnight that may help to prop the temperatures up a bit. Here is the PM satellite picture showing the cloud cover and the snow cover on the ground. We should be able to warm up to about 40° tomorrow despite periods of cloud cover.

By Monday we’ll start focusing on our next very dynamic storm that will be dropping SEwards through the northern Rockies and into the region. There hasn’t been any significant track changes at this point to be concerned about and any snow here looks to be minimal according to the data today but it is something that I’m watching very carefully because there is still potential for this to be a bigger deal for us that what we think at this point in time and it’s still several days away.

Here is a look at the NAM model showing the storm dropping out of SW Canada and heading towards the Kirksville, MO region. This model is showing the upper level core of the storm (18K feet up in the atmosphere) and that is what I’ll be tracking for you over the next few days.

For those unfamiliar with the way the timing goes…once again it’s 00Z for 6PM, 06Z for 12AM, 12Z for 6AM and 18Z for Noon (all times KC time). Notice the storm taking the track that I talked about. With this forecasted track, the best “lift” to the atmosphere will be to the NE of the KC area.

This next map shows the accumulated liquid equivalent precipitation of the storm, in other words where the model thinks there will be precipitation, of which, given the temperatures a lot may be snow.

Again by looking at that map, you can really get an idea that most of whatever falls from the sky should be to the NE of here. What I want to caution you about is should we see about a 150-250 mile shift to the west for the core of the storm, that would place our region in a MUCH more favored area for some sort of combo of precipitation and eventually snow.

As is right now for snowfall, here is what the model thinks…

Again I want to point out that NONE of our model guidance this afternoon brings significant snow to the KC area with ONE exception…the Canadian model. It does have a somewhat farther west track of the core of this storm. As a result it takes the precip farther west as well. The Canadian is an improved model since a few weeks ago when it got a major upgrade and again it is something to be watched for.

By the way I should note that another storm looks more likely towards the 11-12th or so, that looks to be a much warmer storm rain with VERY soggy soil conditions leading up to the storm itself (60s next weekend?)…so we may be talking about some flood watches associated with the storm depending on how things come together, and also the potential of some severe weather perhaps across parts of the southern Plains region at least. March is here and the battle of winter and spring will really start next weekend!

Finally this is a scene sent in from @strongtruckin one of our twitter followers (fox4wx on Twitter) showing a scene that I’m sure is VERY common through the region. Make sure you watch out “above”! 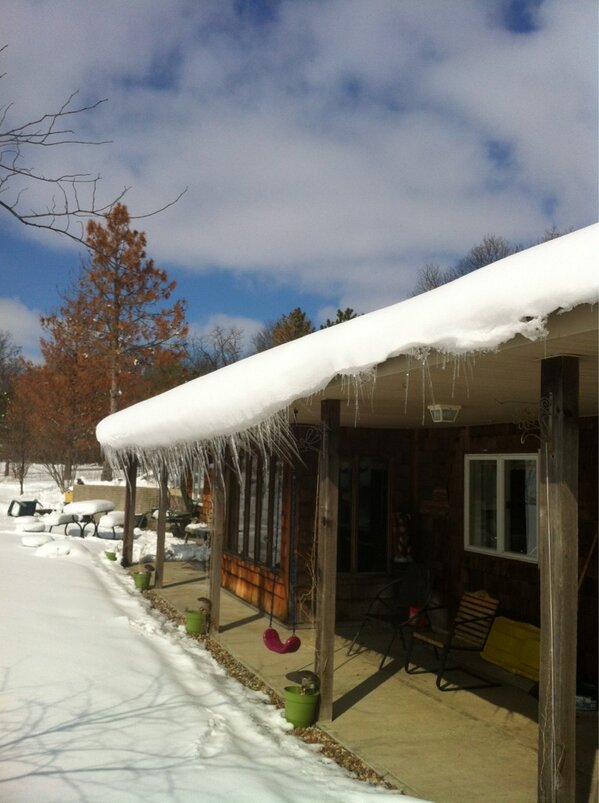 Have a great weekend and we’ll update the blog again tomorrow afternoon.