After some beautiful weather yesterday evening for all the area fireworks displays, today is turning a bit more typical at least from a temperature standpoint with readings now int he mid 80s and we’ll certainly tack on a few more this afternoon as readings approach 90° in spots.

From here though it looks like the slow crawl of more typical summer weather is moving our way. It will though take a bit of time for the nasty summer humidity to get here it appears. Here is a look at the 1PM surface map. the numbers in RED are the temperatures while the GREEN numbers are the dewpoints…for early July, dewpoints in the 60° territory is still pretty OK for the KC area…

Even down into NE TX it’s still pretty “dry” from a dewpoint standpoint, it should be a lot “juicier” here and especially down there. So even south winds will take a bit of time to siphon some richer gulf moisture up to our area…but this will slowly occur over the weekend.

Rain chances: Strangely while many will stay dry, there is actually some weird ways there could be at least some scattered showers out there this weekend. For the last several days there has been this area of clouds/moisture to our west on the KS side…that area will migrate slowly east tonight into Sunday AM…from that little area there have been at least a few VERY random showers overnight lately and I can’t totally rule out something tomorrow AM and again on SUN AM. At this point my feeling is that the chance of any one spot getting rain is under 20% but it is something for me to pay attention to over the weekend.

Monday: Here it gets a bit more complicated. The heat will be building in, but aloft there will be weird small-scale disturbances that could 1) trigger clouds and 2) perhaps trigger some scattered showers or t/showers moving to the ESE. here is a look at the MON PM forecast off the NAM model…look at those little areas of “vorticity” represents by the yellow/red colors in the Plains states.

Now the model won’t be correct in the exact placement of these features but it’s indicative to me that there is a “pattern” that would favor storms to come off the Rockies and leave remnant areas of broad spin in the atmosphere (vorticity) that could trigger renewed rains. The flow farther aloft is also somewhat diffluent (the air spreads out allowing the air below to rise to fill the void creating rising air motion)…so it’s something to pay attention too.

Speaking of rainfall…remember yesterday I talked about all the rain in the FL Panhandle area…check out this graphic from the NWS down there…this is how much they’ve had in the last few days! 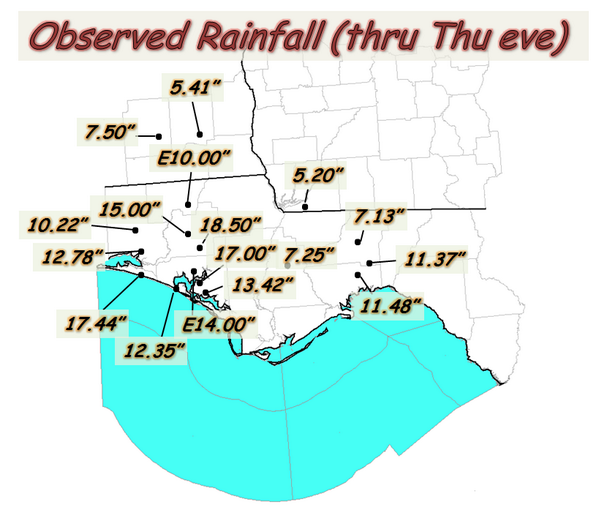 By the way before I leave you there are decent signs that some pretty decent to strong signs that real heat may build into the region NEXT weekend…we’re talking 95-100° potential I think…how close we get to 100° may be determined by whether we get a dose or two or three of rainfall and how green the terrain is or IF we’ve drying out on a widespread basis. Just another heads up about the potential.

Well we missed tying a daily snow record yesterday for the date...we officially had .9" of snow up at KCI...many others south had about doubled that. The record stands at 1" for the date. So close but we did break a record for the coldest high temperature for the date...so there's that.

More on the amount that fell in the discussion.

Freezing rain has started to move into the metro this midday. Expect a couple of hours of wintry mix and freezing rain with a gradual switch to rain as air temperatures rise above 32 degrees around the mid-afternoon. Precip. will be moving out by this evening, marking the end of all winter precip for the time being. Roads are all above freezing at noon today, but bridges/overpasses/elevated roads will be the concern for slickening up for the next few hours. Moving forward, Wednesday is dry until the afternoon as rain comes in late, continuing Wednesday night and throughout Thursday. We're talking about the wintry weather today and additional rain chances, right here!