You’ve probably heard the buzz about it by now if you haven’t heard one of us mention it yet: It’s going to be cold later this week.

Above is just an illustration of how impressive this cold front is in terms of its size and coverage throughout the country. 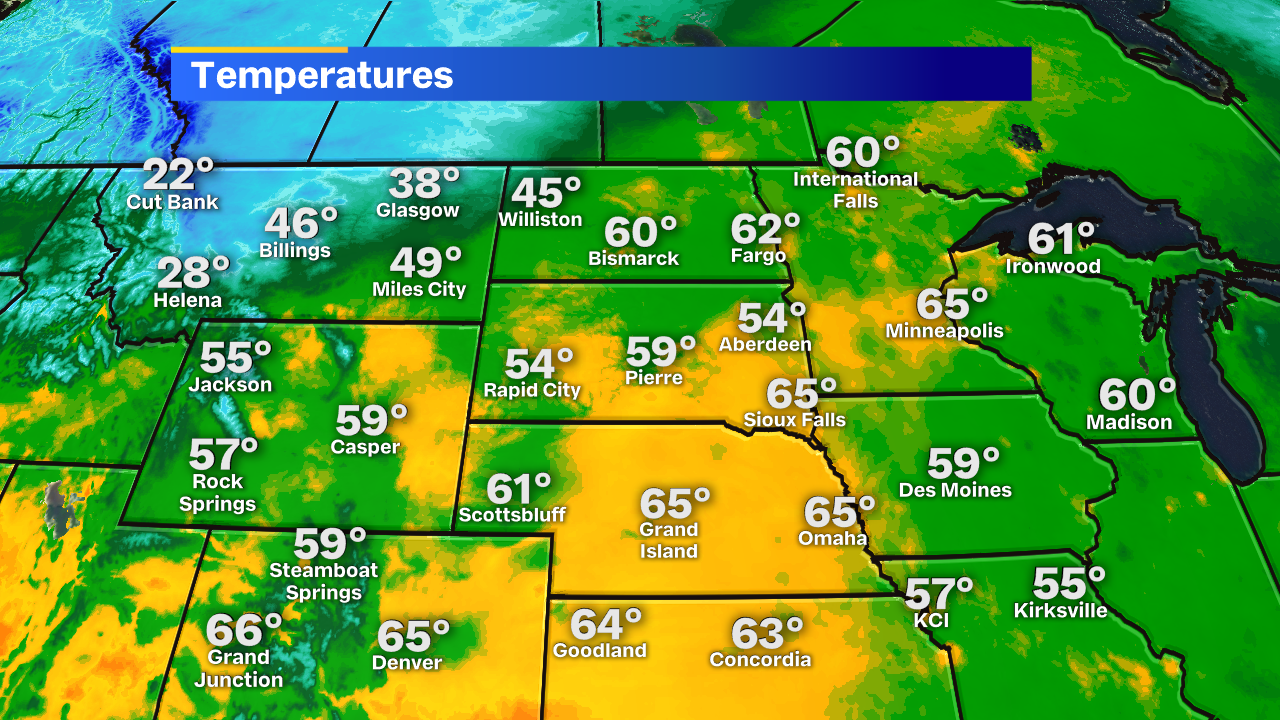 From 6:30-9:30 p.m. on Tuesday, the temperature in Billings, Montana, has dropped 30 degrees. That’s just a sample of what we’re going to be in for throughout the Midwest over the next couple of days. 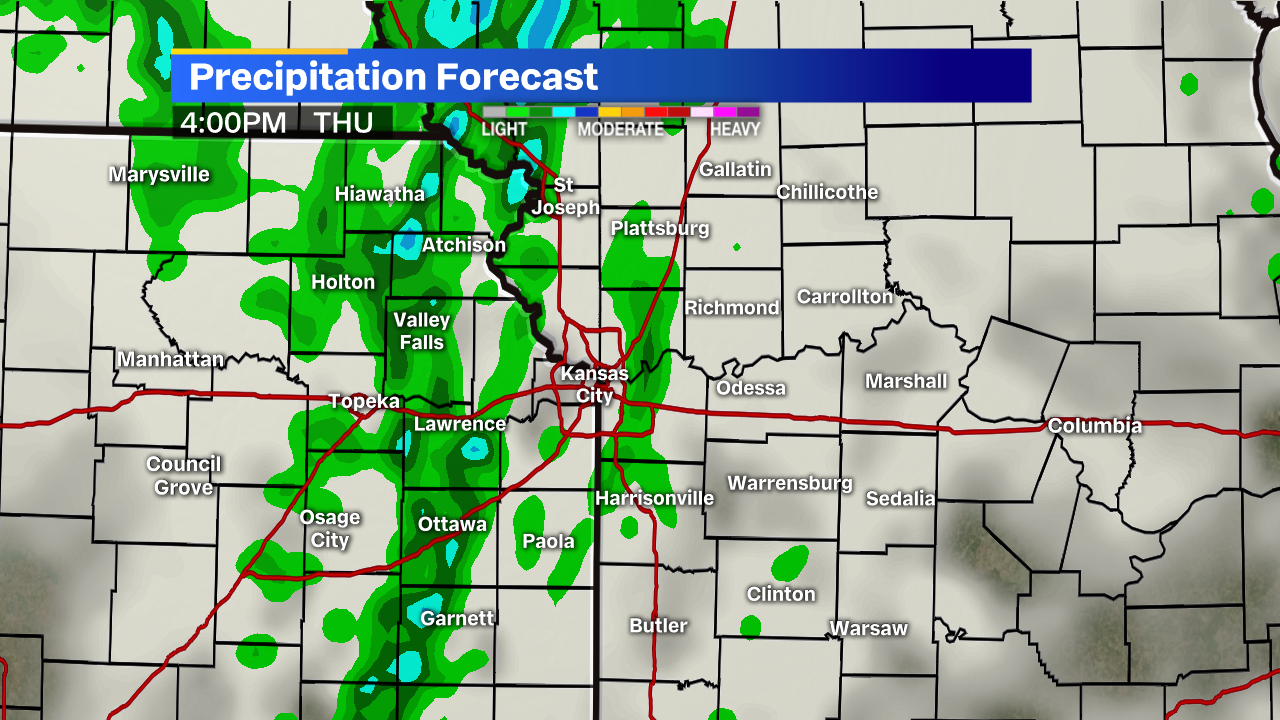 Let’s talk about the rain aspect of this system first.

Thursday is going to be a relatively windy day with temperatures in the 70s. Showers and storms will develop ahead of the front as there’s going to be a 30-35 degree difference behind the front.

Anytime you have a temperature difference that strong, there’s bound to be some sort of severe weather possibility in the right conditions. 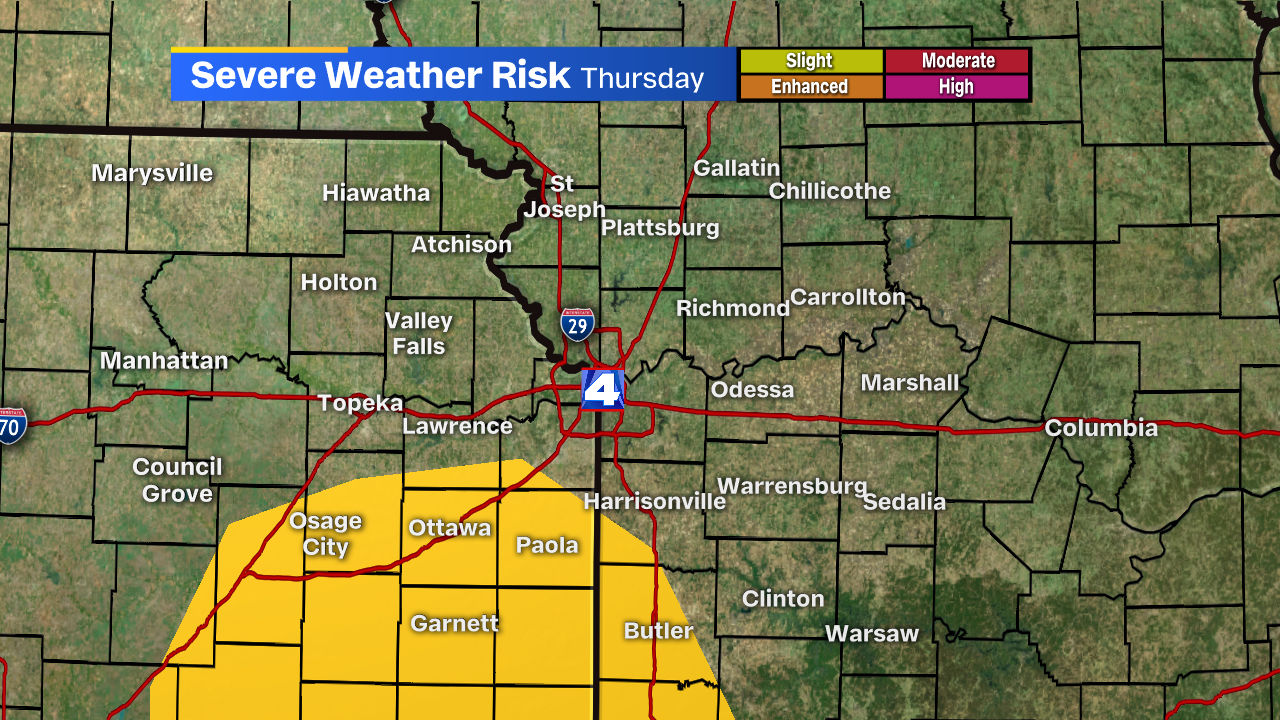 Areas closer to the low pressure center that are south of I-70 have a greater likelihood of severe weather as they’re currently under a slight risk for severe weather Thursday afternoon.

Gusty winds and hail are probably the primary threats, but we’ll pinpoint that as the day gets closer. 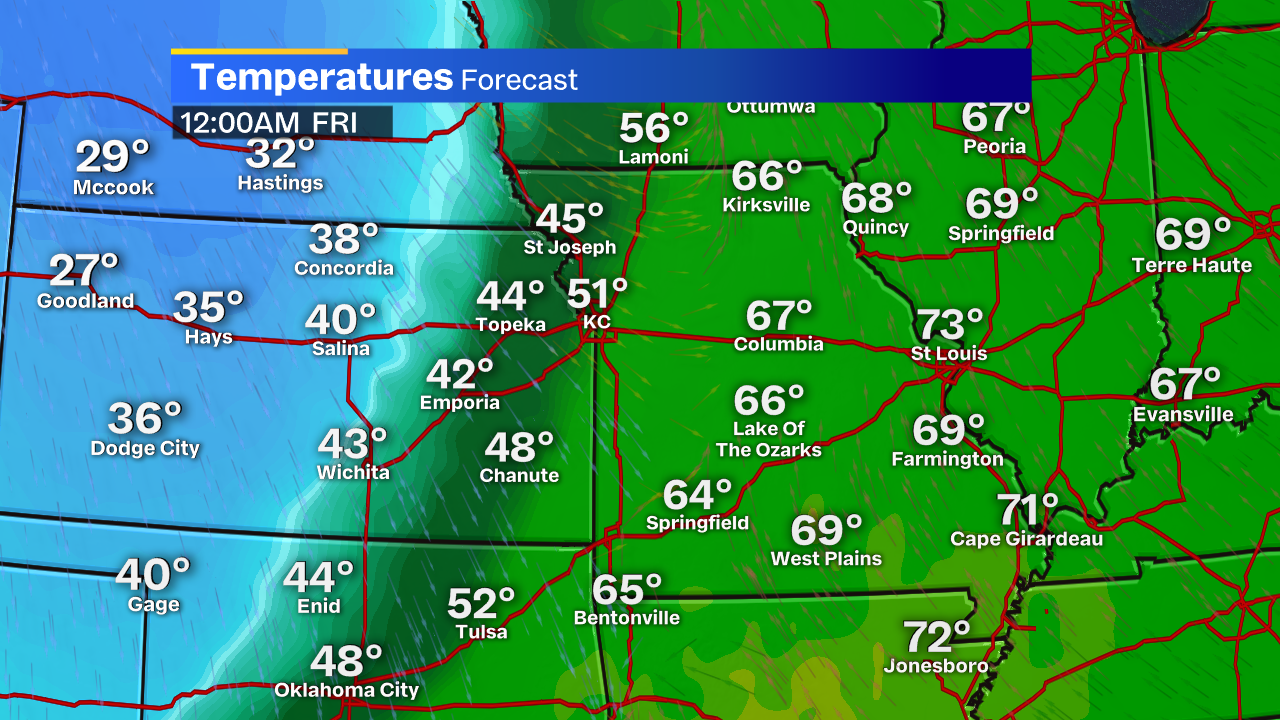 The one thing that’s a certainty is the drastic drop in temperatures.

Timing of the front may differ from what’s shown above, but it’s a good measure for what we can expect in the overnight hours Thursday into Friday.

I think Friday’s going to be one of those days with a midnight high temperature as temperatures will gradually fall throughout the day behind this front. 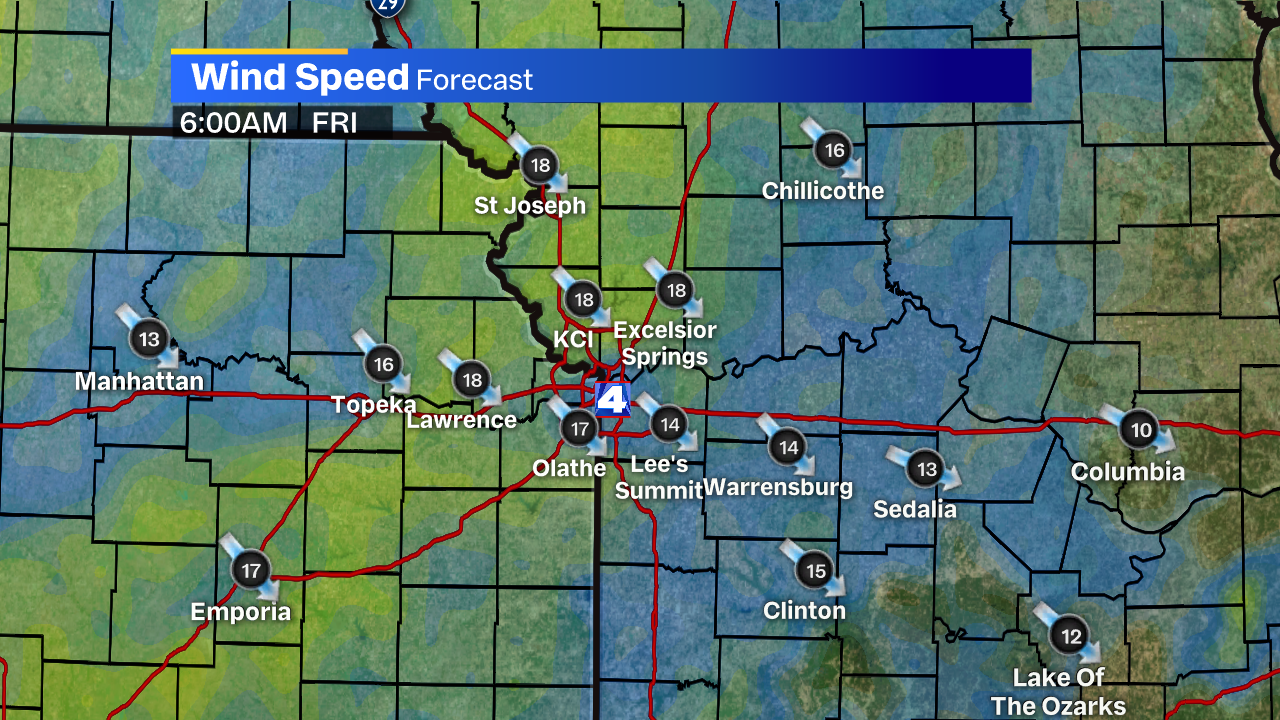 A northwest wind between 15-25 mph will continue to usher in colder air behind the front. A snapshot above from 6 a.m. is something we can probably expect for a good majority of the day as well. 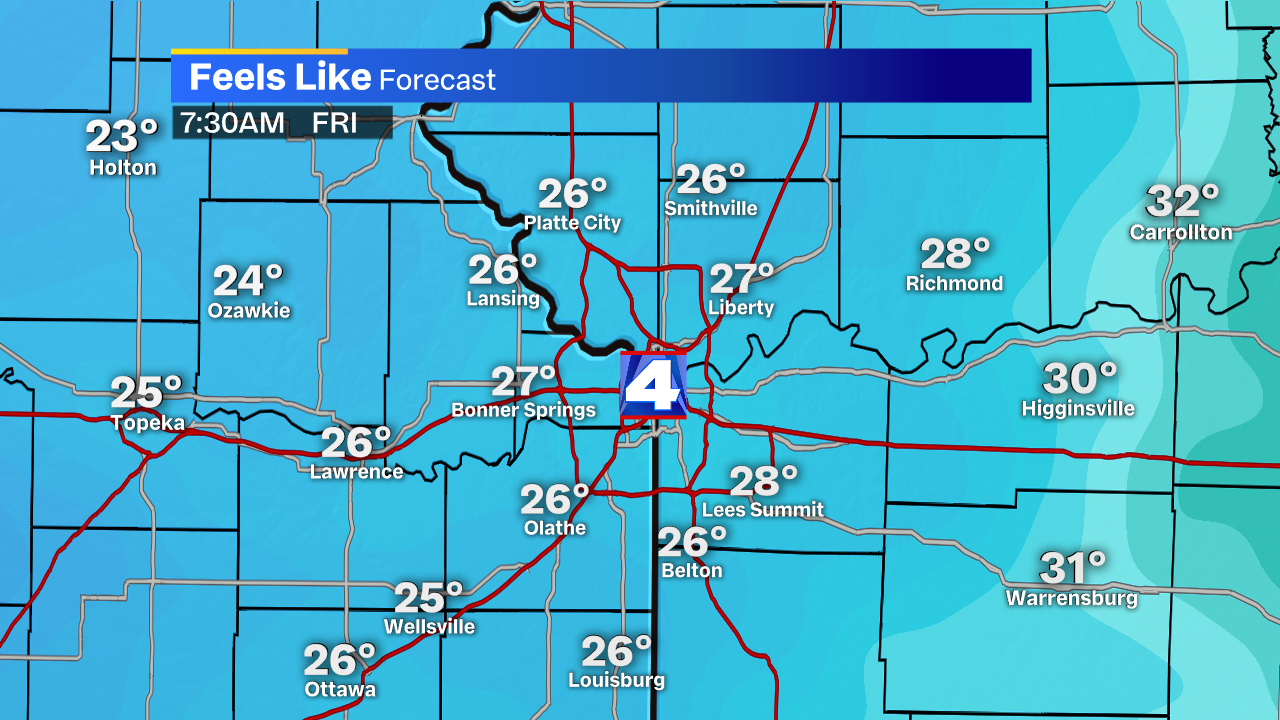 Last, but most certainly not least, wind chill. With that strong wind in the morning, you can expect temperatures to feel like they’re somewhere between 25-35 degrees on Friday morning.

That’s going to be a shock to your system after so many months without it. Dig out that extra layer for the bus stop or when you head to work Friday morning. 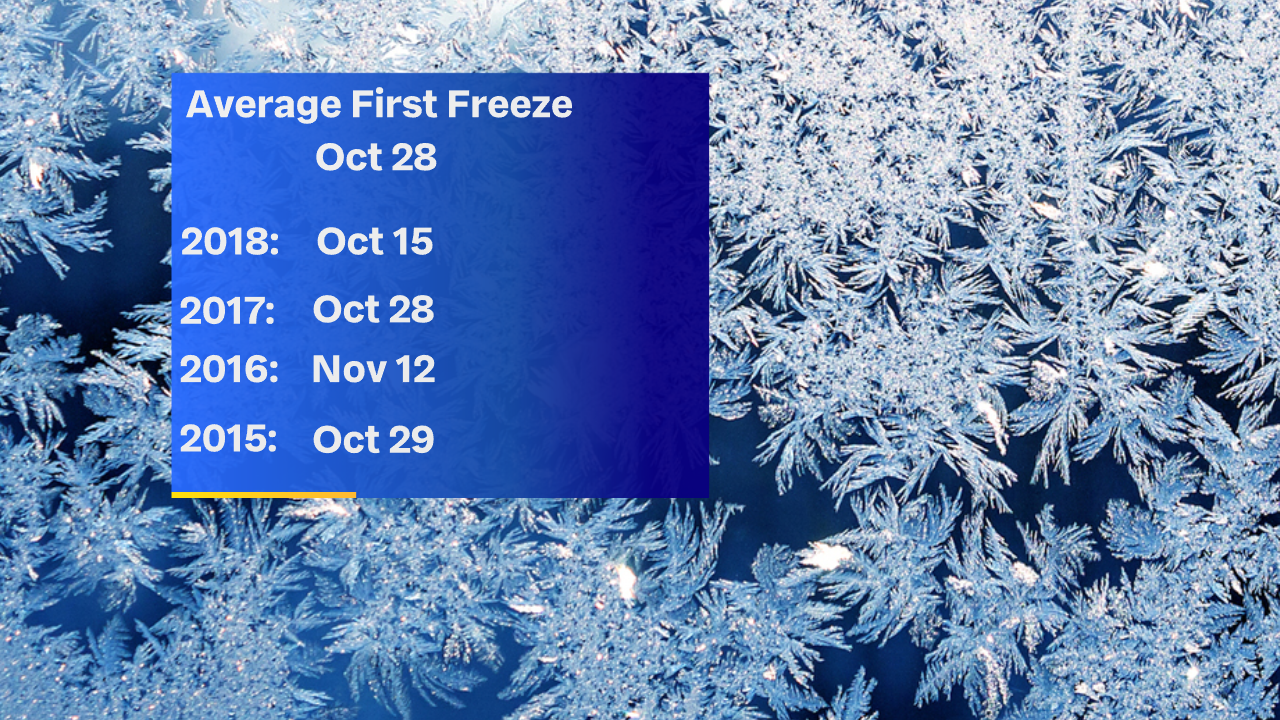 As things calm down a bit Saturday morning, that’s when the coldest of the air will settle in.

Air temperatures will hover around the freezing mark and a widespread frost & freeze is likely. This will be just a couple of days earlier than last year and just a couple weeks ahead of our normal schedule.

Joe’s Forecast: Back to reality temperatures

Joe’s Forecast: Back to reality temperatures

A cold front has changed the weather around these parts with temperatures from Tuesday onwards near to likely below average. We should see some moderation on Saturday before colder weather comes back. There is a system to watch for Sunday Joe's latest podcast: No polar vortexes? We’re about halfway through the winter season, and we’re seeing some strange things happen. FOX4 meteorologist Joe Lauria discusses odd temperatures in Kansas City…