Temperatures and clouds are going to be the trick to the forecast today as the heat will become a mainstay in the forecast through the weekend with limited rain chances and lots of humidity heading this way. This AM we;re starting out very gray and the AM sounding from Topeka reveals that the lowest part of the atmosphere is pretty saturated through about 2900′ or so, a little more than 1/2 mile up. Typically as we head through late April and early May. we’d rely on a combination of wind and sun angle to burn through the clouds and allow us to see sunshine and a nice warm-up. Today though might be a little trickier to get that combination going. The good news is that we’re in the process, as of this writing, in striping away the higher clouds that are over the low cloud deck. That allows the sun to start working on the trapped moisture here at the surface and chew away at the cloud cover. What we don’t have in our favor, and won’t today is wind. The winds here at the surface and aloft through 10K feet are VERY light…under 10 MPH. That means that the air is stagnant and will not mix well at all today. So we just have to depend on the late April sunshine to do it’s dirty work.

That’s why temperatures are tricky today. We’re starting out in the lower 50s with little sign of any breaks in the clouds around the metro. The sun should make an appearance sometime during the afternoon. The early it comes out, the higher the potential of us getting to about 75°. The later it comes out…say after 4PM or so, the higher the potential of us staying under 70°. So an extra one or two hours of sunshine will make all the difference in the world!

Here is the 8AM surface map…all the PURPLE dots represent low clouds and fog cutting visibilities down. The fog is rather thick out there, especially the farther north you go.

That’s a LOT of purple out there. The small numbers next to the horizontal lines between the temperature and the dewpoint (RED/GREEN numbers) show the visibility. So for KCI the visibility is reported as 3 miles.

Again the clearing process will be slow but should happen as the afternoon moves along.

Rainfall continues down towards the Lakes area. I won’t bother to rehash our more local rain totals, you can see yesterday’s blog for that. The Lakes are though continue to get soaked. While initially soaking in, they’ve had so much rainfall now that it’s all running off. Here are the rainfall estimates from the NWS radar in Springfield.

Some pretty hefty totals of over 5-7″ fell down there.

For our region amounts varied from about 1/2″ to close to 2.5″ or so, it was a good soaking rainfall, although last night some areas on the SE side so some real heavy rain for awhile.

The storms weren’t really severe around here. We all know about the St Louis storms late SAT afternoon…but last night the Lubbock, TX area was slammed by nasty storms with hail to baseball sized. Here is what happened to one storm chasers windshield.

Farther north into NC OK, there was a LOT of heavy rainfall around the Ponca City area, including hail. Here is a look at the past 24 hours of rainfall in the OK area. 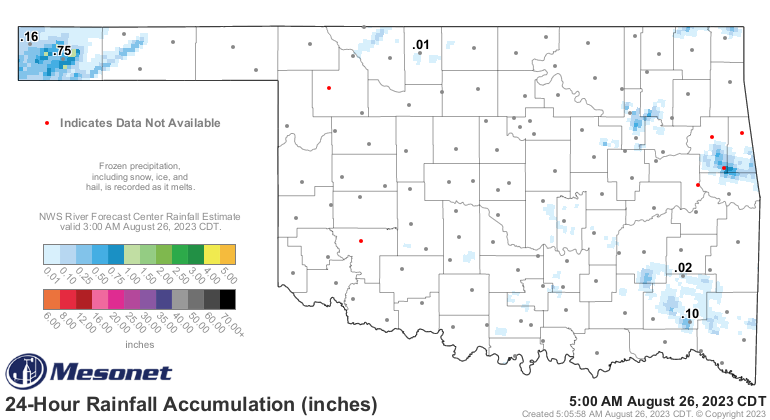 Interesting to note that the contrast to that is Las Vegas, NV which has had only .25″ of moisture this entire year.

Depending on how things evolve tonight, there is a chance that as the heat in the atmosphere builds even more and heads this way tomorrow, we may see some additional storms develop nearby. After that though, the rain chances really drop off for the metro area with areas north of 36 highway more vulnerable to t/storm chances.

No change in my thinking about the heat…lots of 85-88° days heading this way I think and with dewpoints well into the 60s, it’ll feel like early summer out there. There should be a nice wind though for most of the time…probably 15-25 MPH.

Have a great Monday!

One of the nicest days so far this year. It's still going to be nice over the next few days, but the wind is going to play a significant factor over the next 3-4 days. Our next change arrives with a cold front by mid week that returns us to seasonal normal temperatures. Showers and thunderstorms may be possible the rest of the week.