KANSAS CITY, Mo. — Thousands of people from around the world have their sights set on Kansas City and St. Joseph, where there will be prime viewing for the total solar eclipse on August 21.

The extremely rare spectacle comes with a warning from NASA. FOX 4’s Melissa Stern spoke with an optometrist about what you need to know regarding the special glasses you’re buying.

“I think there`s the potential that there could be some out there that wouldn`t be as effective as they need to be for this,” said Dr. Terry Hawks.

“When I was a kid, there was a partial eclipse, and I remember somebody brought their dad`s welding glasses. I was able to see, but this was just a part, this is supposed to be close to a total that I thought, I gotta see this!” said Tom Evans, who plans on seeing the solar eclipse.

To make sure you see the celestial spectacle, you need a pair of specialized glasses that meet certain specifications: 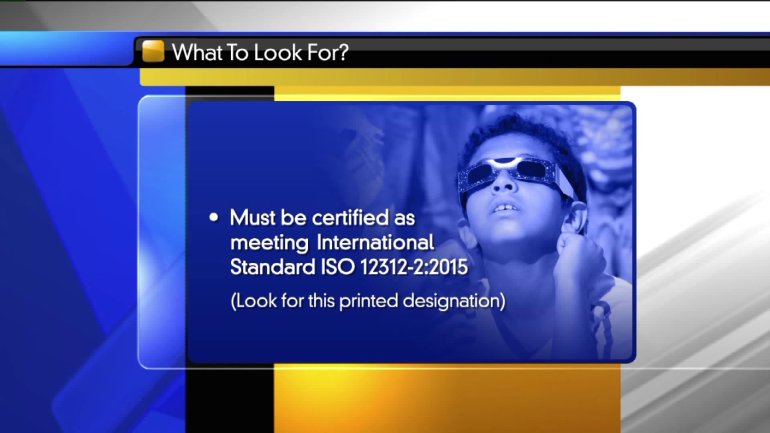 “Looking at the eclipse, even though the sun is hidden, you still get the effect of the rays, just like you would if you`re looking directly at the sun,” said Dr. Hawks.

He adds that it’s important you protect your eyes with eclipse glasses or filters.

“It`s kind of misleading to some people to think that they can look at that because it`s dark, and be okay,” Dr. Hawks said.

But some of those glasses may also be misleading. According to Dr. Hawks, you need to make sure your glasses have a special lens so you don’t damage your eyes. NASA is now warning that some of the glasses on the market don’t have that protection.

“I was kind of concerned about that, if we went into a store and they said, ‘hey, here`s some glasses,’” Evans said.

NASA also warns that you shouldn’t wear any of the glasses if the lenses are wrinkled or scratched.

FOX 4 checked with Price Chopper and Hy-Vee, and the glasses they are selling are ISO approved.

You can get the special glasses at the both the Powell Observatory in Louisburg, the Warko Observatory on UMKC campus or at the Astronomical Society’s website for $1. For more information on the eclipse, click this link.