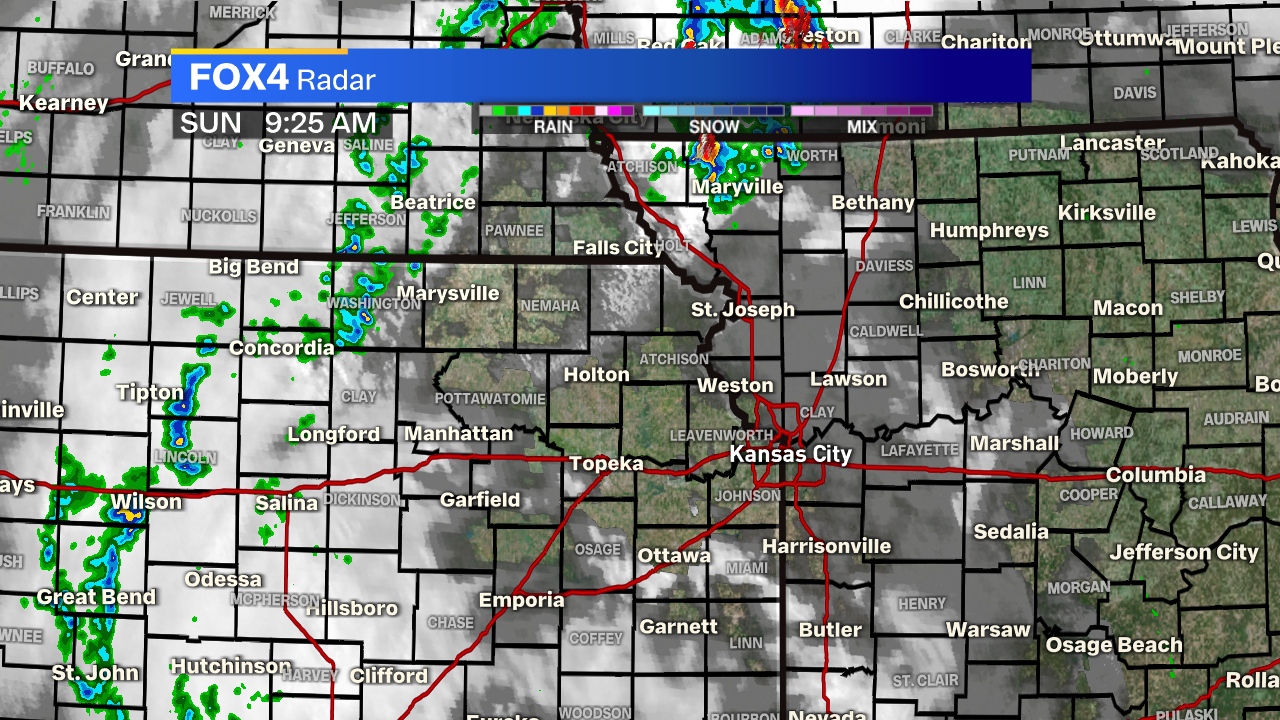 Good morning! Another week, another stalled out system which will ultimately create rain chances for us the next few days.  Rain is developing out west already, but essentially going nowhere.  That will be a big focus on our flooding potential the next 24 hours. A system to our SW will gradually move NE and give us an opportunity for storms later on today. 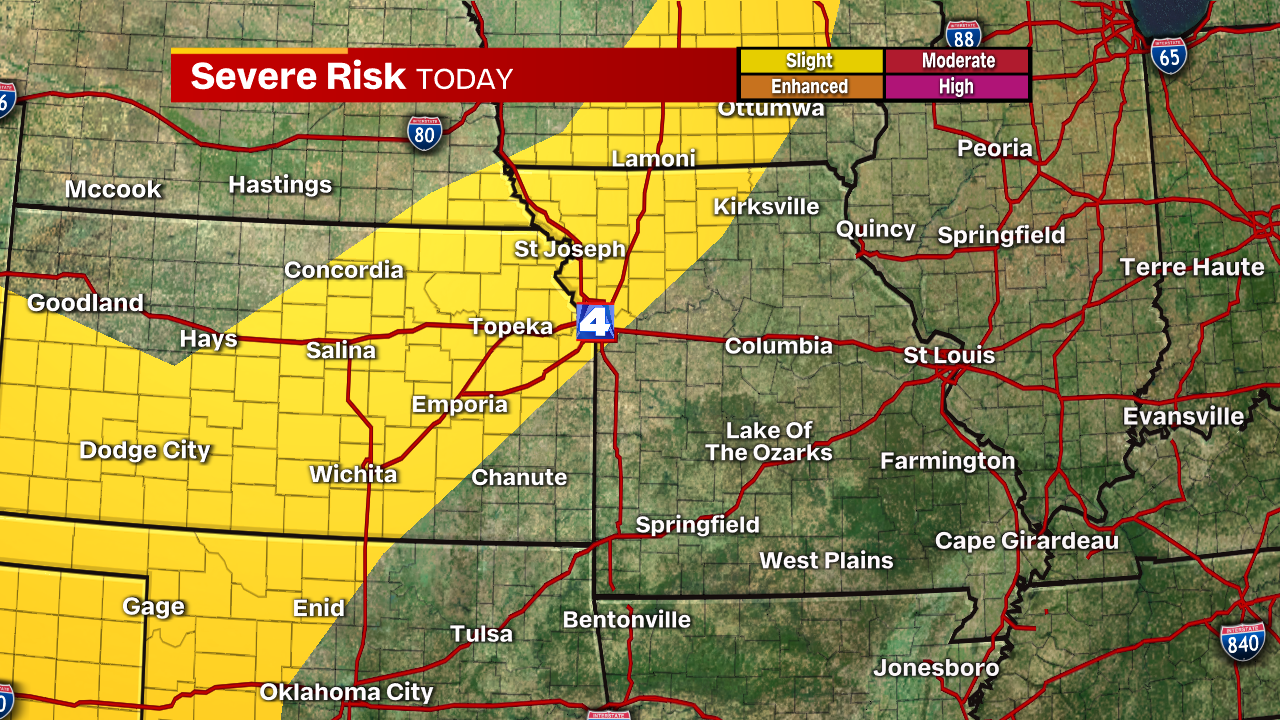 There is a slight risk for severe weather today.  The greatest risk in our area looks to be in NE KS and NW MO at the moment, but that won’t rule out the possibility for stronger storms anywhere else. 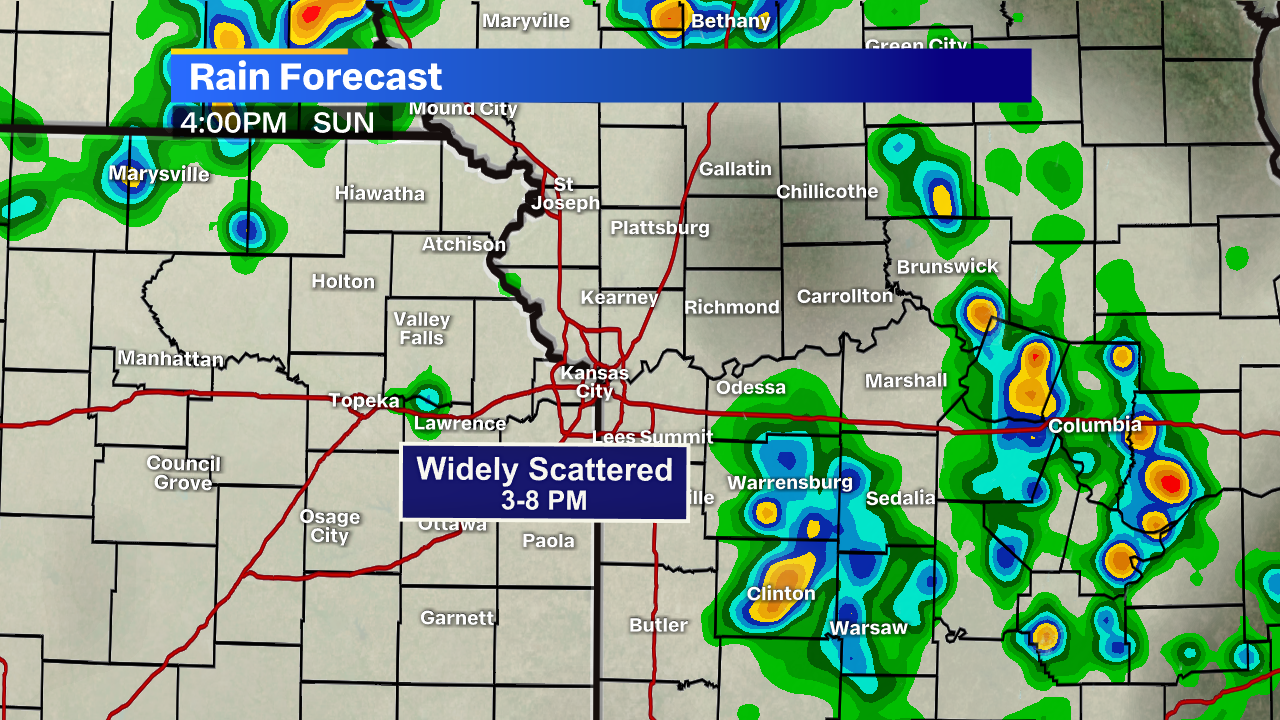 As that impulse draws closer this afternoon, a few widely scattered storms will develop.  That means many of you won’t get any rain at all.  There will be a few strong storms at this point, but a severe threat may develop later. 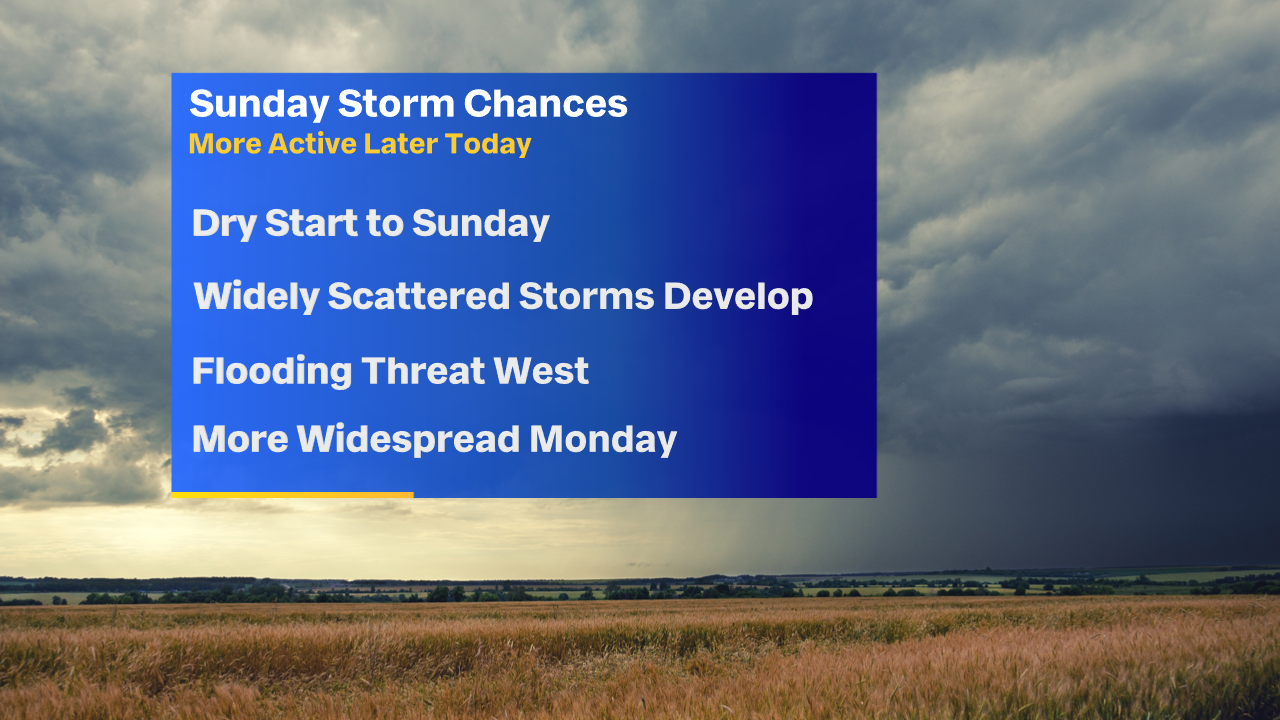 Let’s recap what we’re expecting the rest of Sunday: a mostly dry morning and even early afternoon with more storm chances developing later in the overnight hours and especially Monday. 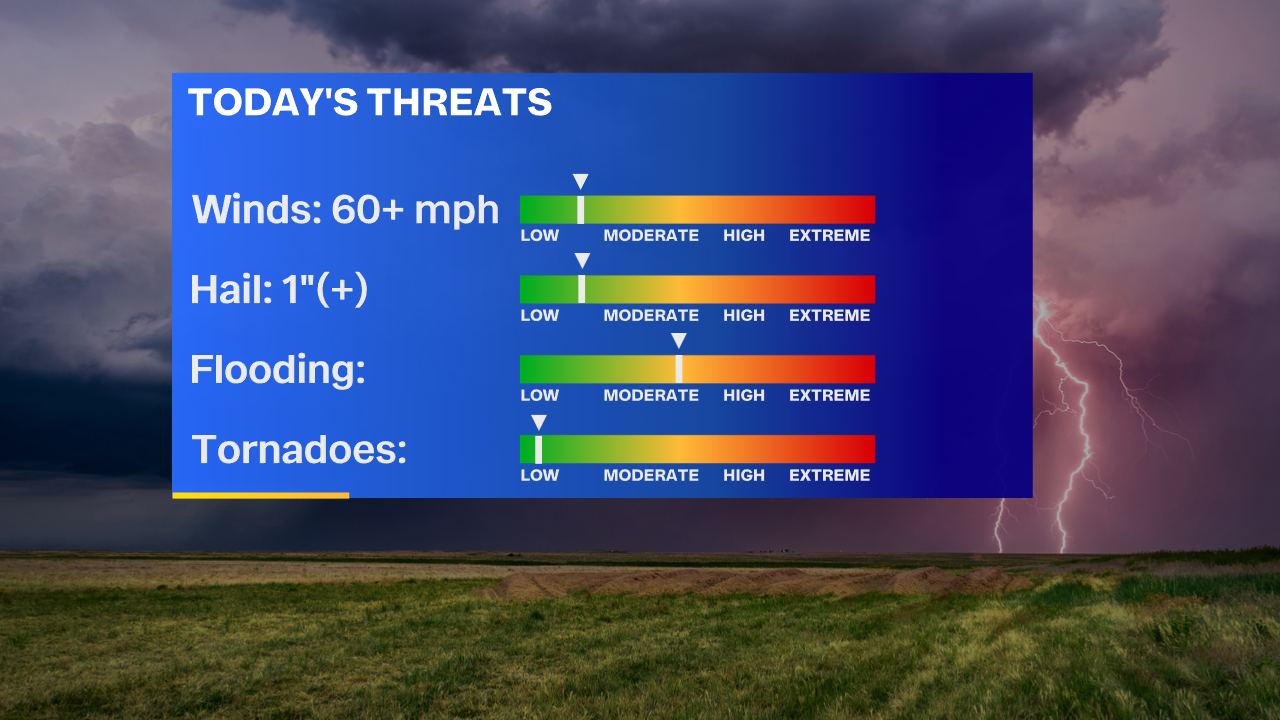 A few of these storms that develop later on could produce some larger hail and brief gusty wind damage, but that’s not a larger threat locally.  The major threat will be consistent heavy rain over the next 24 hours. 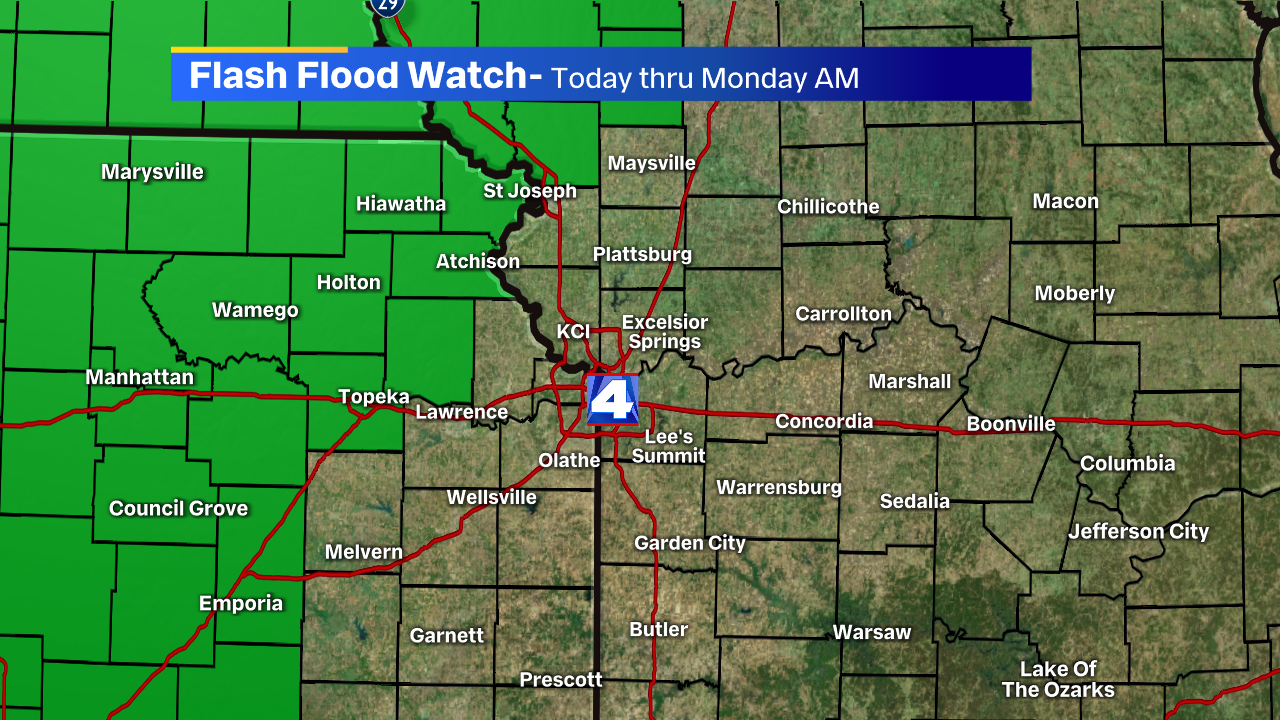 That’s why a Flash Flood Watch is in place in NE KS, NW MO, and points west of the immediate metro area.  Over 4″ of rain will be possible for some locations by Monday night! 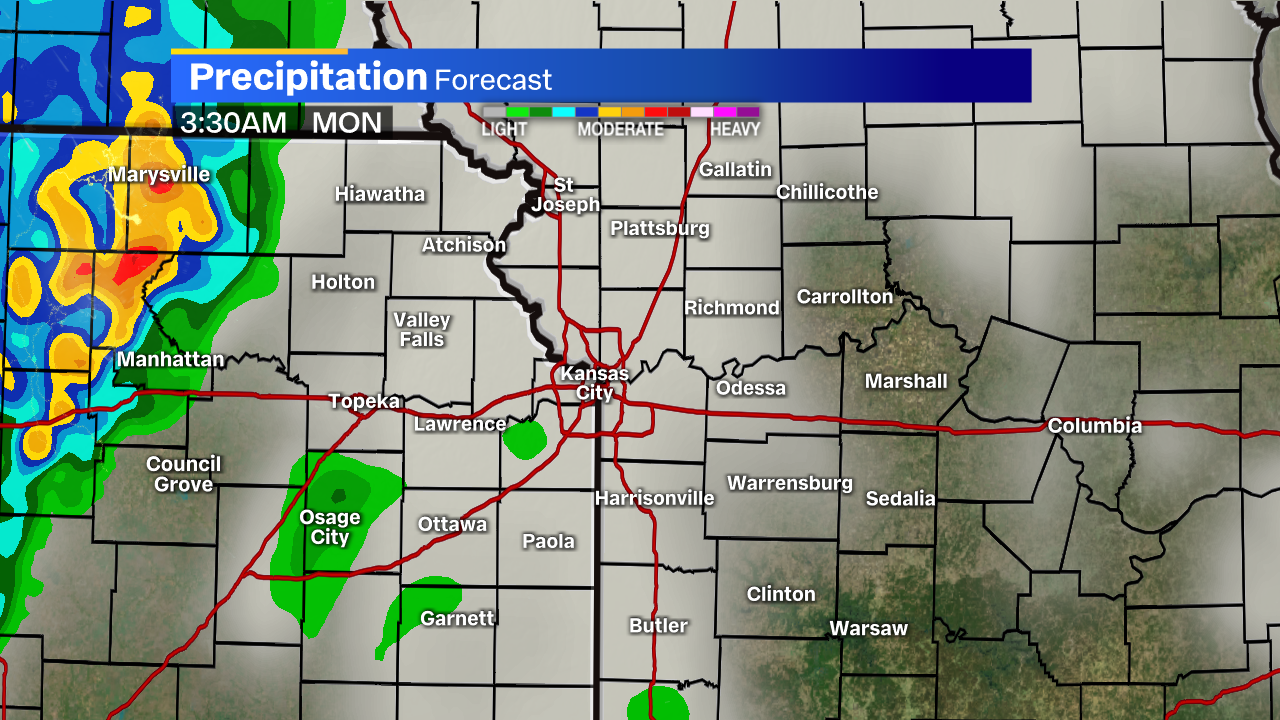 Here’s where that initial heavy rain (and even minor severe threat) may set up to the west of the metro early Monday. 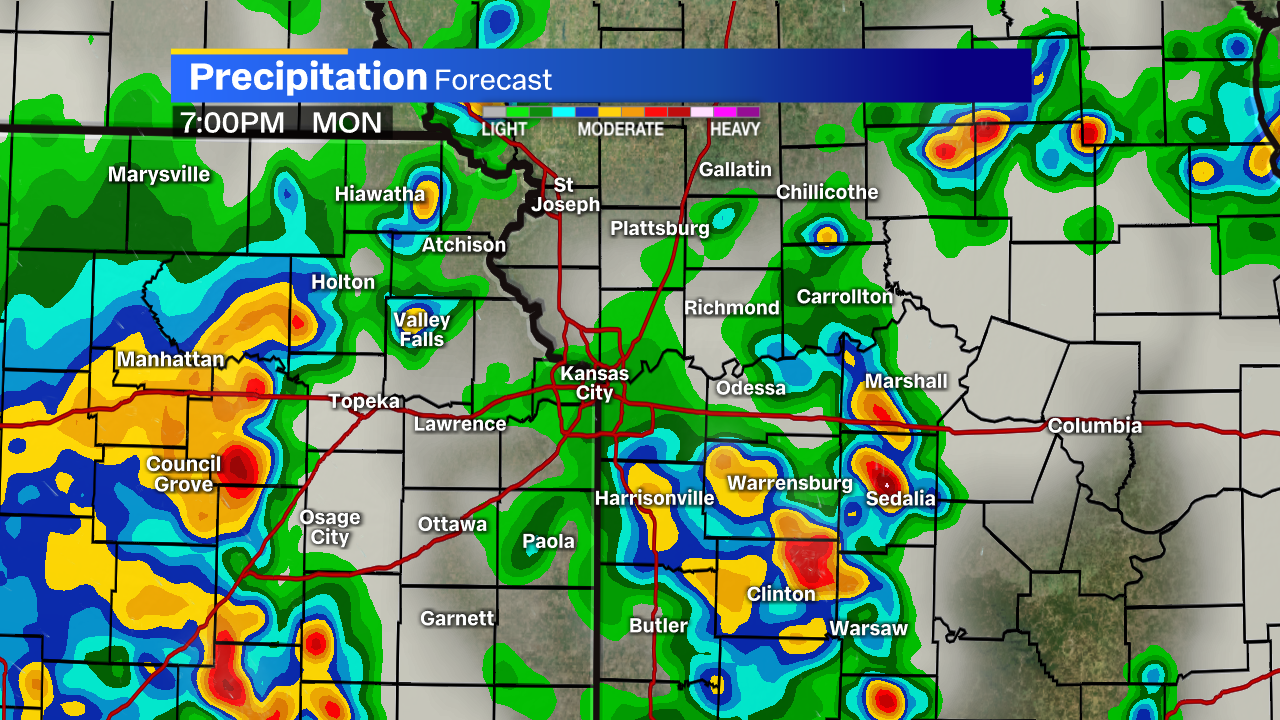 The rain lingers over the same locations Monday evening as well.  It will spread east into the metro during the day as well.  I don’t expect that it’s an all day rain again, but Monday is our best shot for consistent rainfall over the next few days.  Expect to dodge rain on Memorial Day and if you’re traveling north and west, there may be some road closures due to flash flooding (and difficult driving conditions.) We’ll keep you posted as this system continues to develop.

Clouds and cold air will remain in place today as we struggle to reach 30° this afternoon. We have another round of snow arriving overnight and ending mid morning on Wednesday. We are tracking that for you in the update here!

See the auroras from space in newly released photos

Here’s what has to happen for $1,400 stimulus checks to become reality