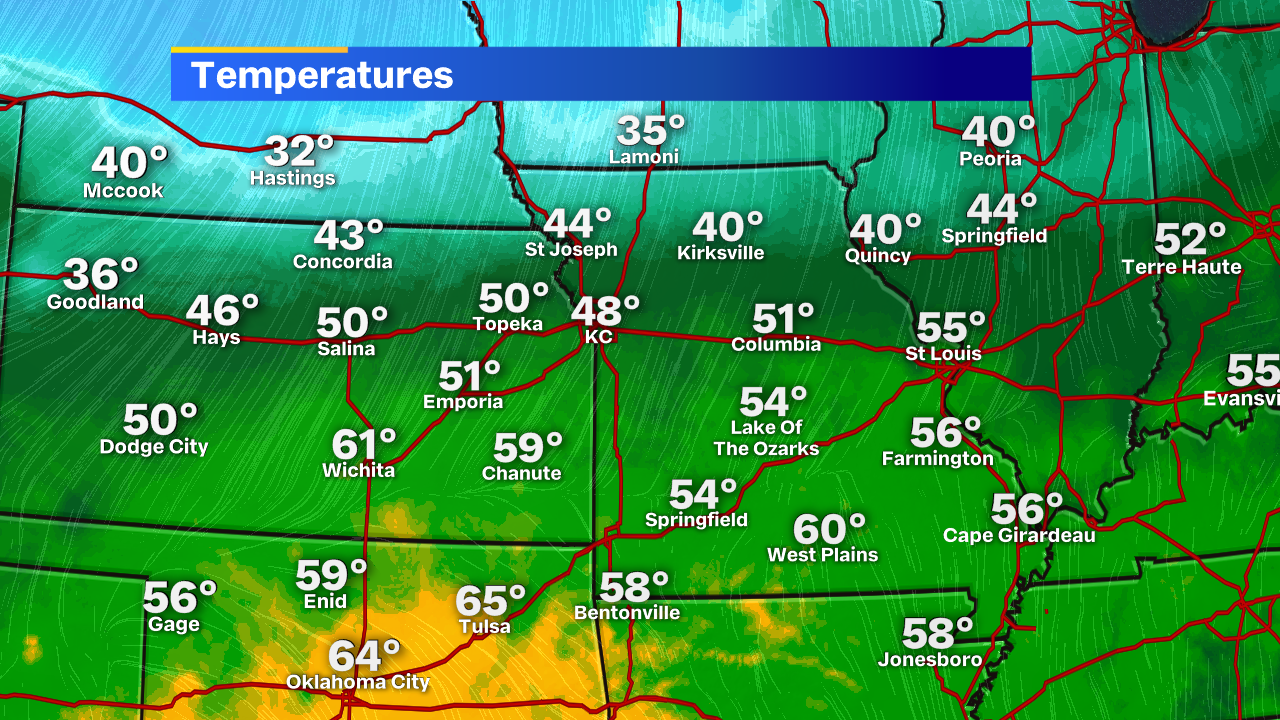 After what turned out to be a relatively nice Sunday, temperatures have already begun to fall.  Stepping outside in any capacity the rest of Sunday and you can feel the significantly cooler air.  There’s more where that came from, and it’s going to be responsible for switching our seasons overnight. 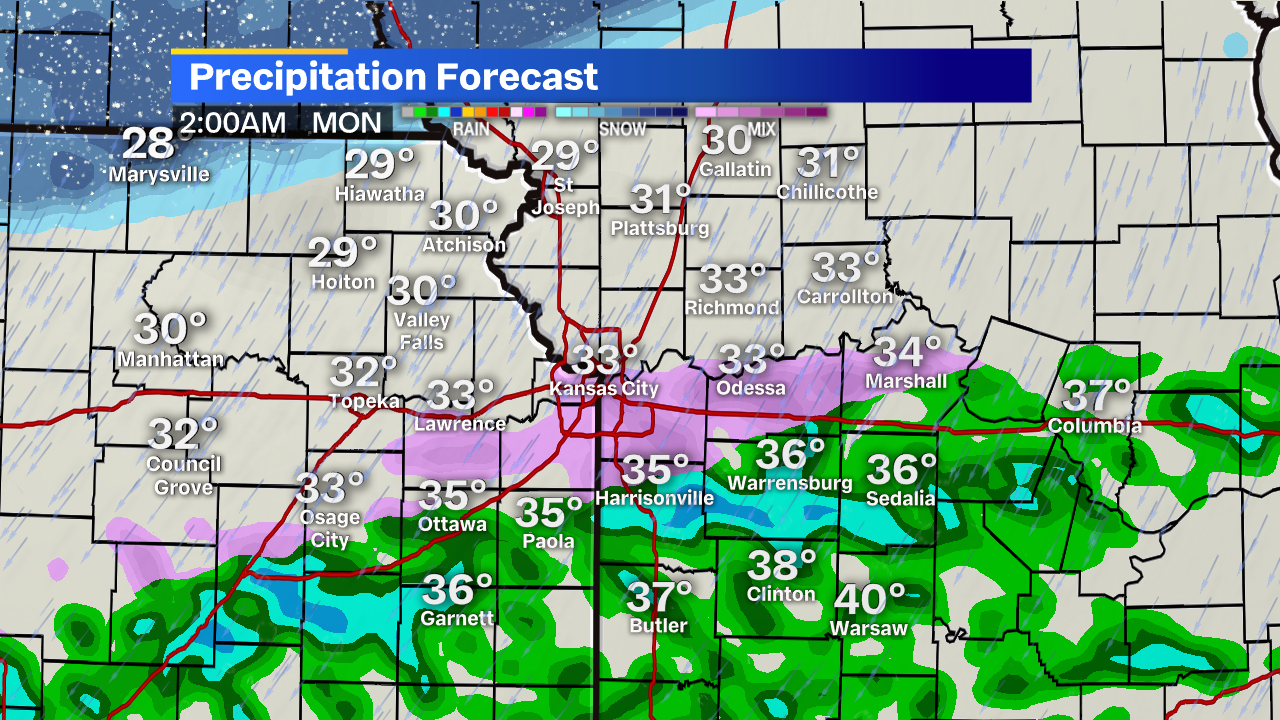 I wouldn’t expect much precipitation to develop until after midnight.  That’s when we’ve got a couple different parts of this system pretty visible above.  Areas to the south ahead of the warmer air mass will be dealing with an initially cold rain and some sort of mix.  Areas in northern KS/MO will deal with snow ahead of that much colder air mass. 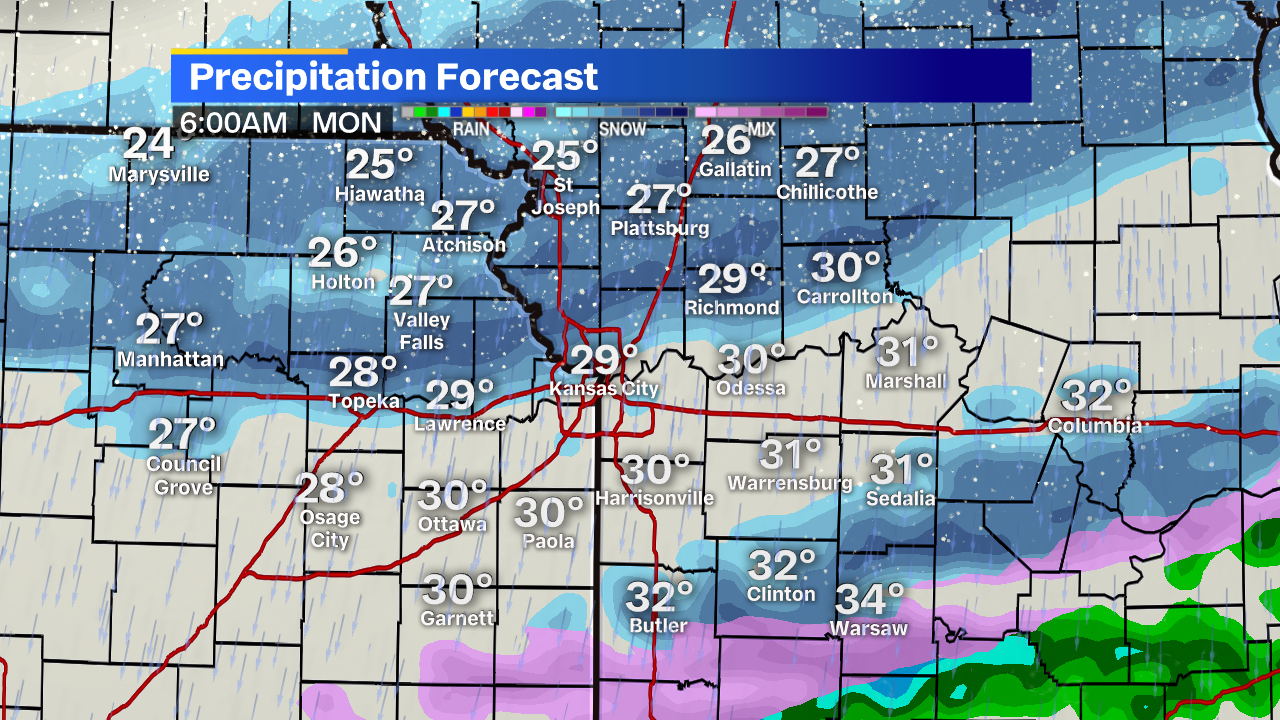 Once more of that cold air settles further south, all of this changes to snow.  This will coincide with the morning commute as well.  Because some of you don’t have work or school because of Veterans Day, there may be less people on the roadways.  That doesn’t mean the weather won’t cause a few issues in the early morning. 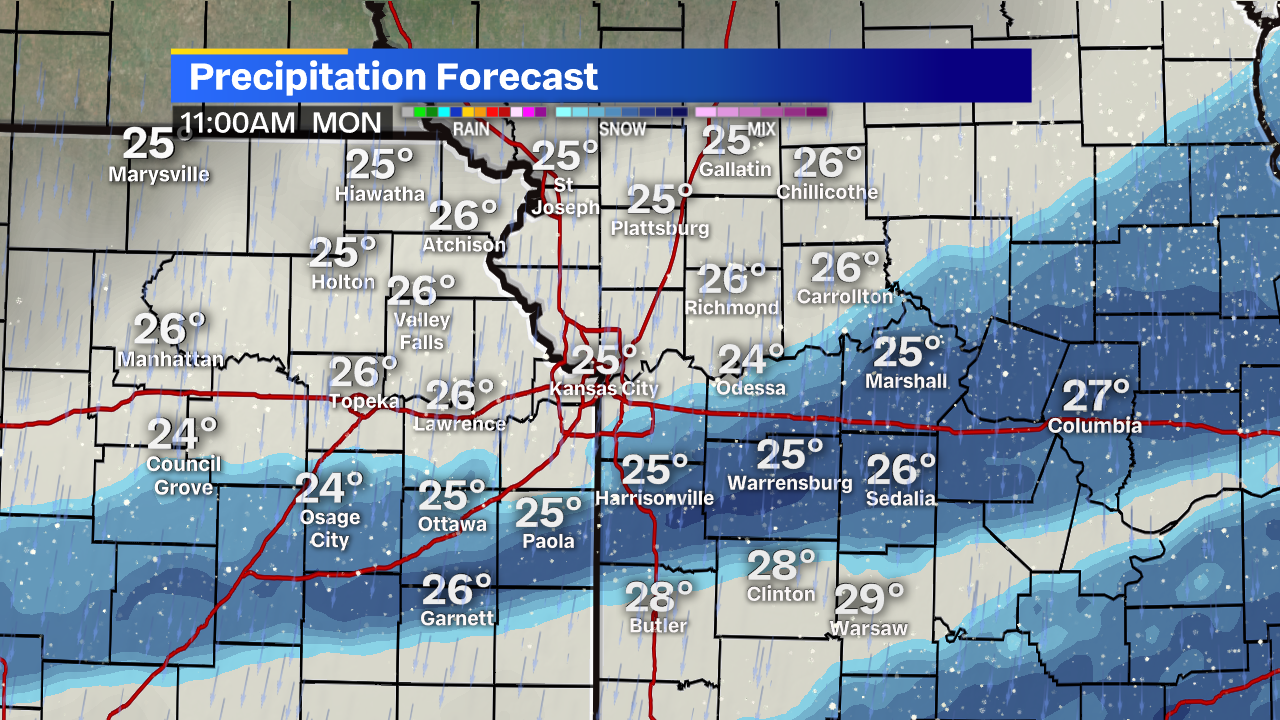 Just before noon, most of the snow has migrated south and leaves behind much colder air and a few flurries. 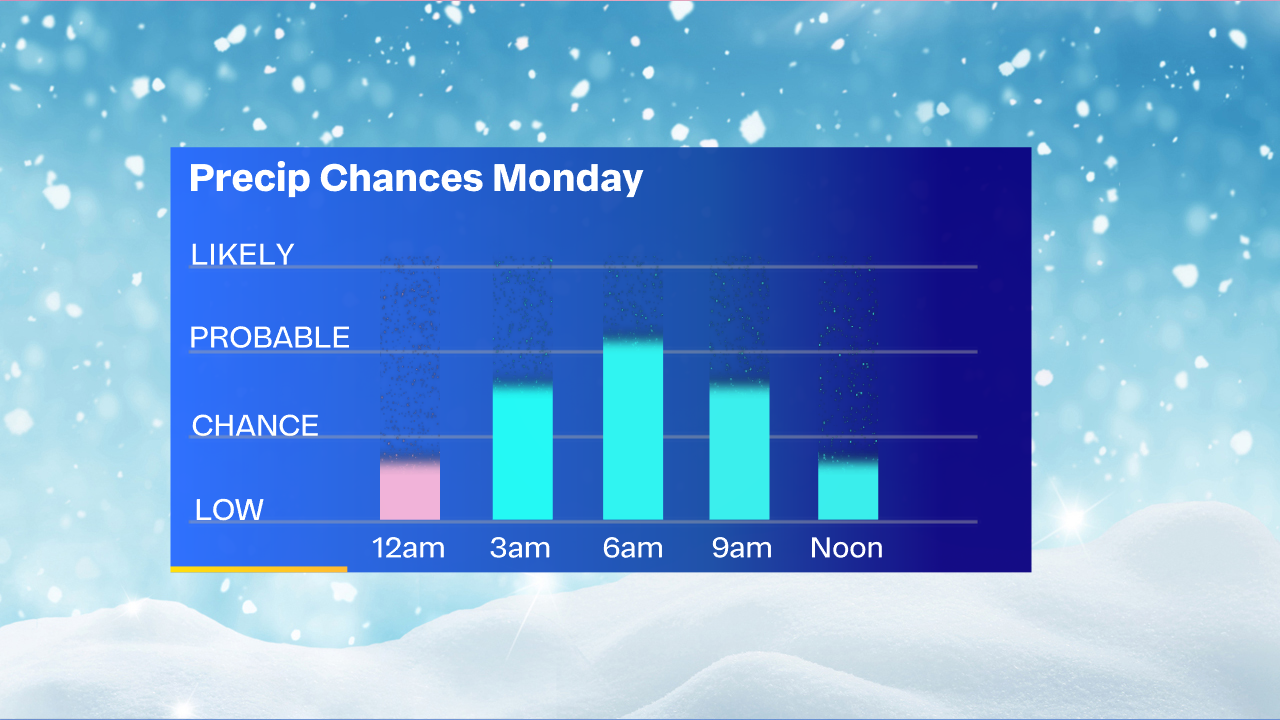 Sometime between 3 AM and 9 AM is where I expect the bulk of the snow to fall in the metro.  Despite an early rain/snow mix around midnight, most of this will fall as snow. 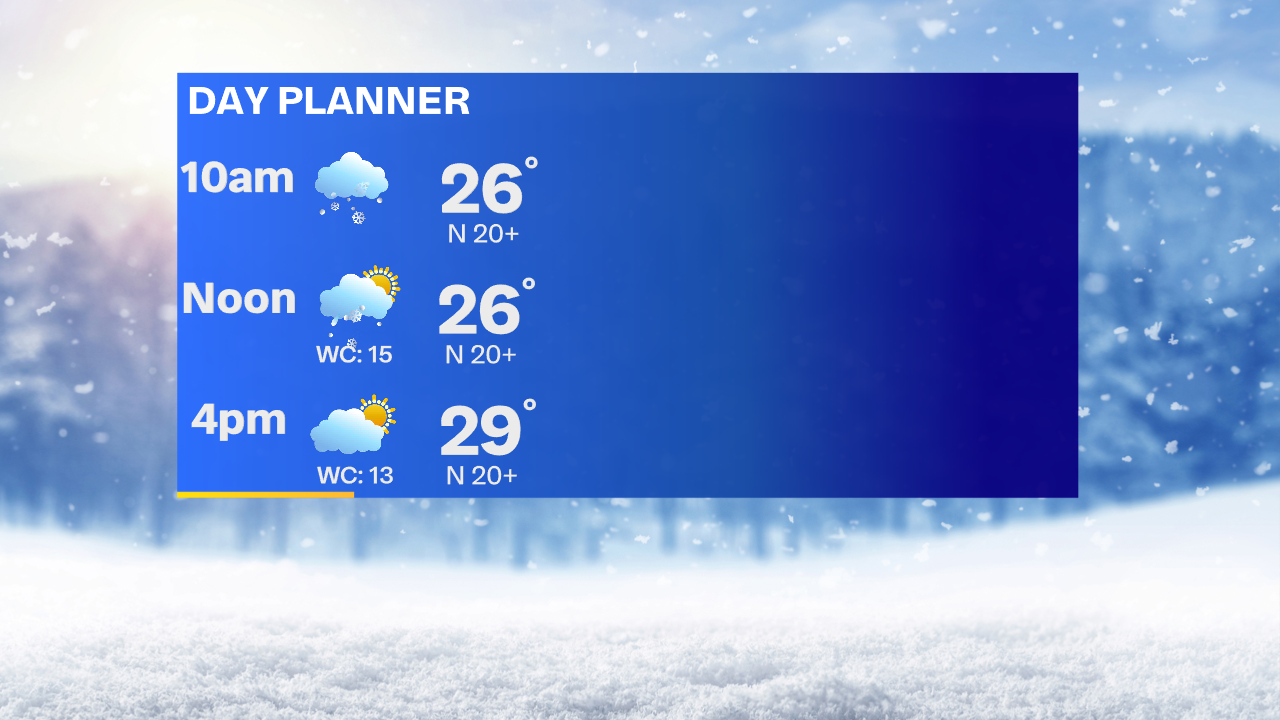 The wind is going to be another issue as well.  Wind chills range anywhere from 8-15 degrees most of the day.  A pretty strong north wind will require you to break out the winter coats if you haven’t already.  Despite the early snow, the sun is expected to come out in the late afternoon hours. 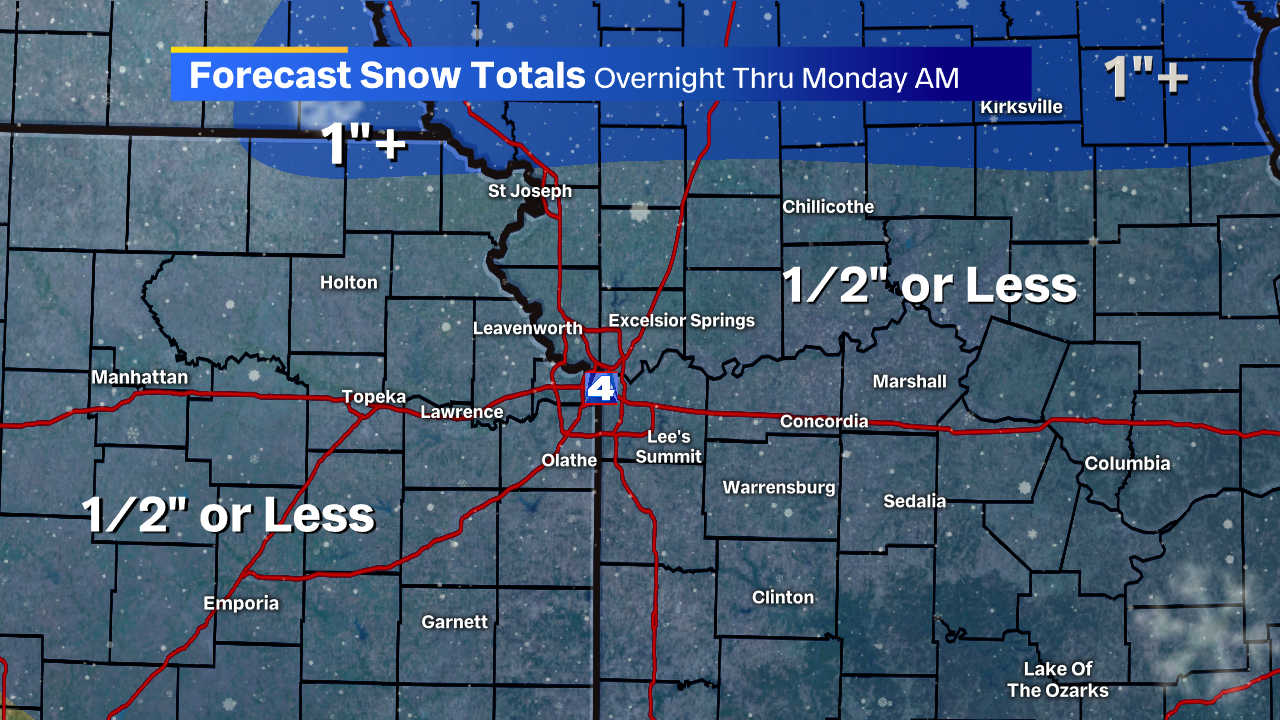 As a general rule, we’re probably getting a half an inch or less area wide.  Areas north of highway 36 may receive a bit more than an inch.  There may be even some metro areas that pick up near an inch. 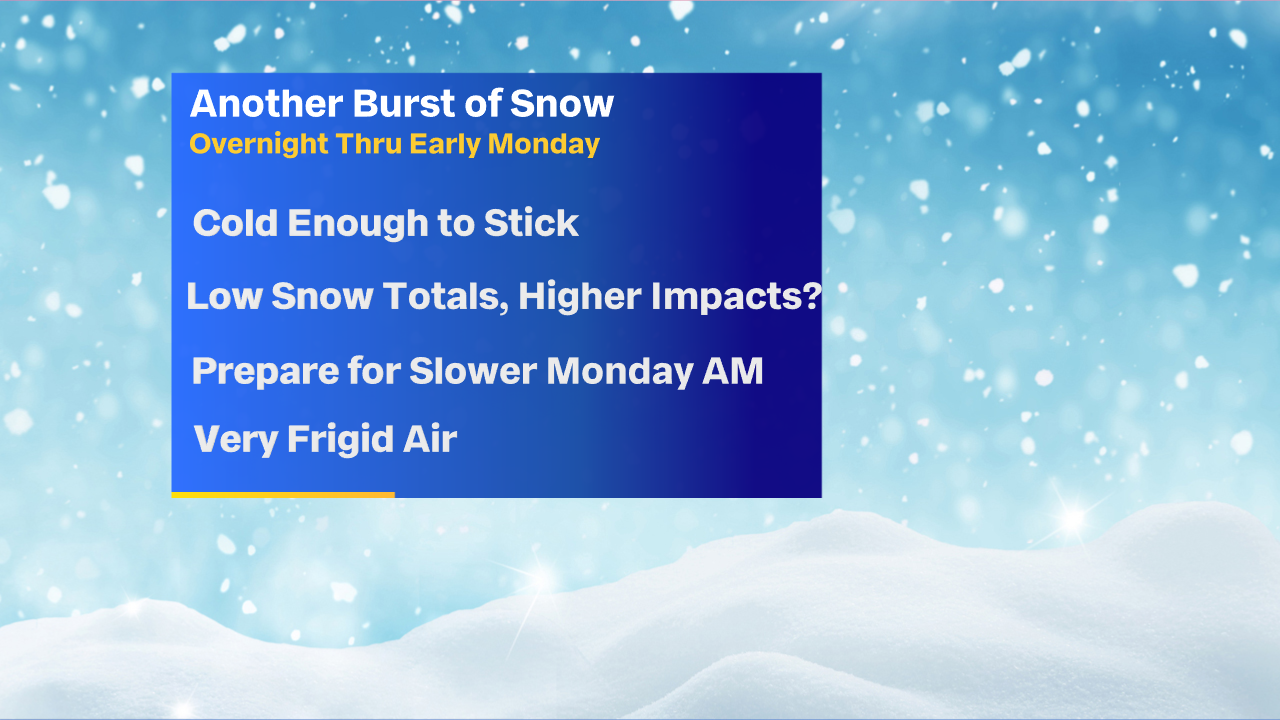 Can we handle a half an inch? Sure. But the quick drop in temperatures may not allow the road crews to get ahead of the situation.  With less people on the road (in theory,) hopefully we can handle some of this light snow early morning.  I just think the timing makes the snow the most impactful.  I am almost certain you won’t be going the full speed limit Monday morning, so just plan to get up a bit earlier.  I can assure you that everyone deals with the colder air as it’s likely we won’t return above freezing until Wednesday.

We'll start with sunny skies this morning, but some upper-level clouds will move in to take away a bit of the sunshine later this morning and into the afternoon. It'll still be dry and much warmer, with highs quickly warming up into the upper 50s by the end of the day. A good breeze out of the south and west will definitely be noticeable by this afternoon as gusts climb…