The winds today are a good thing and a bad thing…without the wind, we probably would be as warm…temperatures as of this writing are in the 55-60° range and tomorrow should be even warmer. With the wind today though we’re trying to “mix” down some of the warmer air just above the surface and that’s the reason why we’re above average for temperatures for a change.

Tonight: Fair skies with somewhat steady temperatures. Wind tonight should lighten up a bit as readings drop into the 45-50° range and hold pretty steady overnight.

Saturday: We may see some morning clouds moving into the area…but they should dissipate in the afternoon (if not earlier). Temperatures tomorrow should warm up into the 60–65° range without the “gustiness” to the winds.

Sunday: Strong cold front moves in between 6AM-9AM (current timing). We should be near 50° at daybreak…then start a fast downhill slide later into the morning and through the afternoon. Temperatures by sunset should be in the 20s and with the winds blowing, we should have single digit wind chills. IF you’re tailgating or going to be inside Arrowhead, please be prepared. There won’t be any sunshine (obviously since it’s a night game) so that won’t help out any part of the stadium. This will be a “frostbite-aware” game. Please take this seriously as you make your clothing choices. North winds will be blowing at 15-25 MPH during the game!

As of this morning, our November temperature is running 7.9° below average. That’s pretty impressive and we continue to be at the 3rd coldest November in KC weather history dating back to the 1880s. We won’t end up the month though ranked #3. Odds do favor a top 10 finish however with milder weather today through SUN AM, we’ll chew away at that monthly anomaly over the next 3 days or so.

With the exception of the western part of the country, it’s been a cold month out there! Look at the 2nd US map below…those are the anomalies this November thus far (through the 26th at least)

This warm-up that we’re enjoying (except for the wind factor) won’t last too long, at least for this round of warmth. A sharp front with some arctic air and a LOT of western Canadian air is going to move into the region 1st thing Sunday morning. Just above the surface here is the way the anomalies look at around 5000′ or so. It’s a great way of watching the various airmasses play together compared to average late November temperatures at that level. 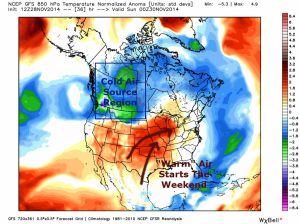 So our cold air will essentially be comprised of a bunch of SW Canadian air and perhaps a touch of NW Territory air. It will be cold for sure…but take this airmass and stick it into January and we’d be talking sub-zero potential.

Meanwhile at the surface where we live of course, we’ll warm up nicely ahead of the front tomorrow and you can see what happens (compared to average) on Sunday. These next two maps are off the GFS model. The 1st map is valid at 6PM on Saturday…the red coloring indicates “warmth” while the blues>greens>purple/pink is the nasty stuff on the move. 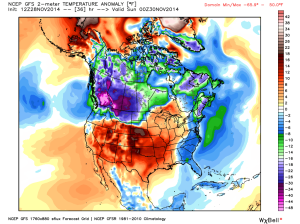 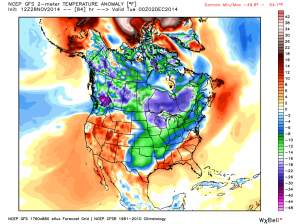 The “core” of the cold is a bit more centered in the upper Midwest region around MN and you can see how the cold will affect Minneapolis, MN

The coldest air will be with us Sunday into Monday before it quickly starts to retreat Monday night and we should moderate somewhat on Tuesday. Highs on Monday should struggle to get to 30°, while Tuesday we should be in the 40-45° range or thereabouts at least.

despite everything that is happening and what also may happen over the next 7+ days, there are no significant storms on tap for the area. The lack of moisture, is ever so slowly, drying things out. The winds have not helped out the soil profiles as they help to take the moisture in the top part of the soil away. We could really use a good soaker or snow accumulation to help the cause a bit. I still feel it’s coming but odds favor after at least the next 7 days.

Some good news is heading towards central and northern CA…and that is some drought-relieving rain/snow. A nice storm off the coast of the Aleutians will be impacting CA this weekend into early next week. This promises some significant rainfall (5″+) in the favored areas…obviously the highest mountain ranges there will do well with the snow it appears. 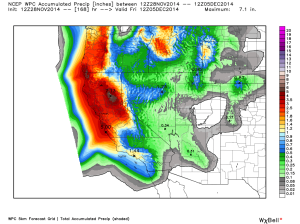 I did a bit of research today to find out who will benefit the most from this moisture…and while southern CA may get a little help from this as the water slowly winds it’s way southwards via the watershed system…certainly areas north of there are excited.

Considering the long standing drought there…it will be welcome.

Click on the image below to make it more readable. 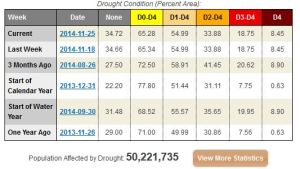 For us, odds favor that system coming ashore then passing through the N Plains…we should only get clouds from it later next week or so at this point.

That’s it for today…I’ll either get another write-up done tomorrow or wait till Sunday. I may try and do some yard work tomorrow afternoon while we’re into the warm air again.

The snow system worked out well...with accumulations running anywhere from 1/2" to 2"+ or so. There might be a few areas out towards Clay Co that have seen close to 3".

Clouds will rule the day and probably a bit of the night as well. Temperatures will remain cold with readings today in the 20s. We'll see how much we drop off tonight. IF we clear out...we could tank to near 10° but I'm not sure we'll clear out.