Good afternoon…skies across the area are mostly cloudy and a cold front has moved through the region allowing cooler air to spread in. It’s somewhat unusual to see temperatures actually drop a few degrees during the day in May with cold fronts…but that happened this morning as temperatures went from the lower 60s to the upper 50s-near 60° as of the noon hour. Aside from perhaps an isolated sprinkle the rest of the afternoon…we’re done with the rain for a day or so. Another cold front will move into the area later Monday into Tuesday AM…and that may have another chance of rain with it.

Today: Variable clouds and cool for May with temperatures 60-65° this afternoon with southwest winds of 10-20 MPH

Tonight: Clearing out and cool with A/C saving lows down into the 40s

Sunday: Sunny and pleasant with highs around 70°

Monday: Increasing clouds and pleasant with a few showers possible during the day with better chances later in the evening. Highs around 70°

I’ll talk more about Monday’s chances of rain, especially heading into later Monday evening in Sunday’s blog. The overall picture though is a cooler air mass will be settling into the area for most of next week  (TUE>FRI AM) before we start warming up again heading towards Memorial Day weekend. I’ve written a lot about how May and June are the 2 wettest months overall here in KC…so it’s tough to stay dry over the 3 day holiday weekend. Any cold front during this time of the year usually has at least some rain associated with it. Of note is the 11.35″ of rain we’ve received since April 1st officially in KC.

I thought today we’d take a walk down memory lane to a memorable day in KC weather history. Today marks the 60th anniversary of the Ruskin Heights tornado. The tornado was believed to be on the ground for some 71 miles…starting in Williamsburg, KS…towards the Ottawa, KS area and eventually moving towards the what is now the Lakewood Lakes area of Lees Summit, MO towards the west of the I-470 corridor. The width of the storm ranged from about 100 yards to over 700 yards wide. The two maps above are from a write up that the NWS did a while ago.

The tornado ended up killing 44. 37-39 in Ruskin Heights, MO and 5-7 on the KS side. It damaged or destroyed over 500 homes in Ruskin Heights when it hit after 8PM that evening. Here is an aerial picture via the KC Star. The write-up linked above is a fascinating read. I especially am fascinated by the technology that was present (and that wasn’t present) at the time of this tornado. Here is an excerpt…

“The use of radar to detect weather phenomena was a new technology during the 1950s. The radar network in place during the 1950s was composed of a hodge podge of excess military radars that were used during World War II. The U.S. Weather Bureau had installed a new radar (WSR-57, 10 cm) on top of the Federal Building several months prior to the Ruskin Heights tornado; however, the radar was not operational on that fateful day. The radar operator at the Kansas City Municipal Airport on May 20, 1957, Mr. Joseph Audsley, performed radar surveillance using an older radar (WSR-1, 10 cm). Communication between local weather office and SELS was accomplished by teletype. In addition, teletype was used to disseminate weather-related information to the media. The following is a transcript of U.S. Weather Bureau teletype messages issued on May 20, 1957. The transcript is supplemented with additional information chronicled by Joseph Audsely, as well as, Allen Pearson and Hugh G. Crowther formerly of SELS. You will note that the terms “tornado warning” and “severe thunderstorm warning” are not included in this transcript, as these terms were not part of the U.S. Weather Bureau lexicon at the time.”

What is amazing at the time was the work done by meteorologists who were just in the beginning stages of understanding the complexities and ingredients for severe storms and potential tornado formation. As you might imagine…as is now…there are many things we know and don’t know about tornado potential…here is another excerpt from the write-up from the NWS about the “forecast” issued during the middle of the afternoon hours before the tornado hit.

Back in the day…WDAF-TV was only about 8 years old at the time and owned by the Kansas City Star. The TV and radio anchors at the time were constantly interrupting the program at the time with updates on the developing situation. Here is a picture from Time magazine in the aftermath… 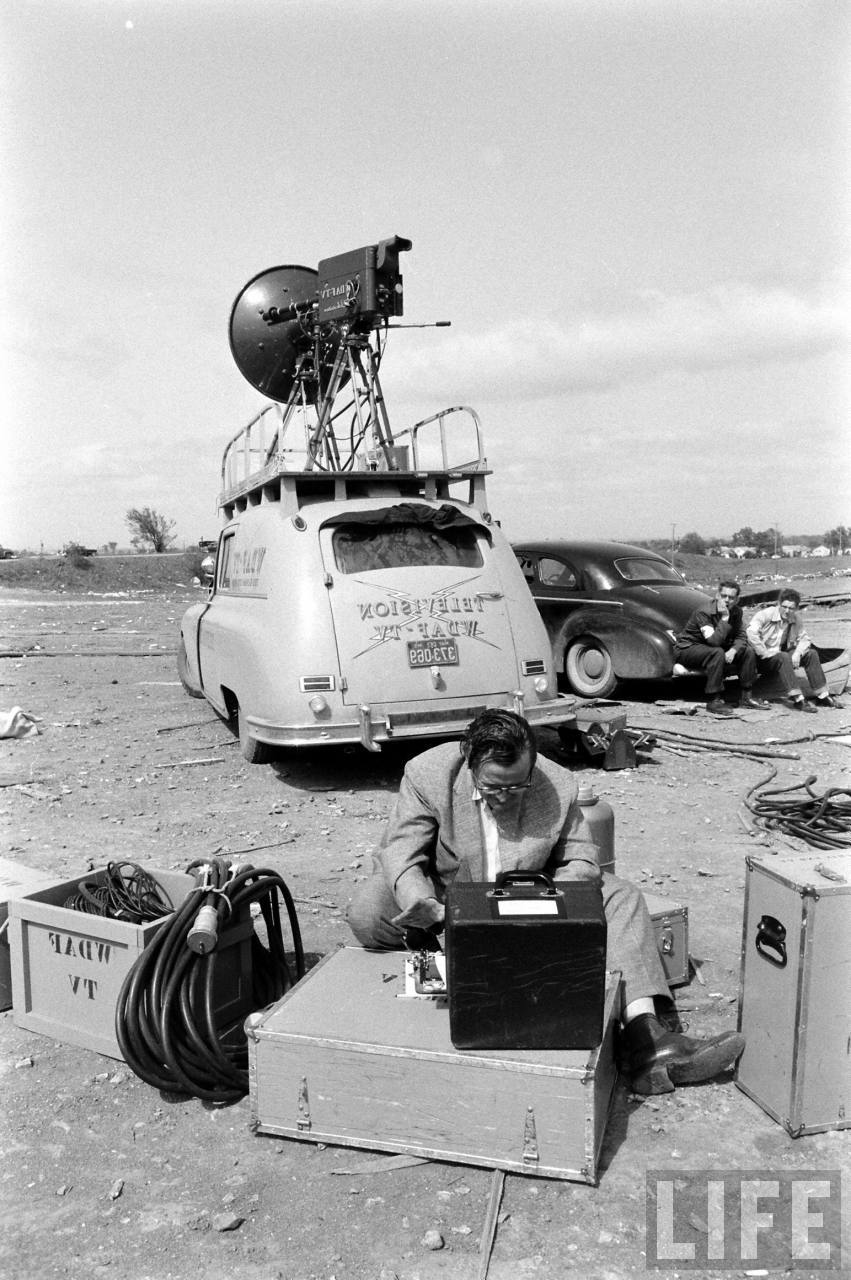 Mike Smith wrote a book called Warnings which detailed some of the coverage that day…I believe he was impacted and saw this tornado…and like many meteorologists…this one event set his career path in stone. Here he is writing about another family.

What I found ironic…is that even back then people were flipping channels because of weather interruptions!

Radio and to a certain extent the nascent TV coverage was the main form of communications and broadcasts back then…and the announcing on the radio at the time, no doubt saved many lives.

Also noteworthy is that the term or alert “tornado warning” was not even allowed to be uttered by the National Weather Bureau at the time!

On FB today I wrote about the anniversary and asked for memories some may have had about this. Matt Friel wrote in with an interesting comment.

“you may also want to talk about the fact that the Ruskin Heights Tornado was also one of the first, if not THE first Tornado “Warning” for the National Weather Service (Then the US Weather Bureau). The warning occurred at least partially due to the skilled observations of the storms path in the proximity of the Olathe Naval Air Station (New Century Airport – Gardner) and the Grandview Air Force Base / (Richards-Gebauer Force Base / Centerpoint KCS Intermodal Center) and the new application of surplus military RADAR to weather forecasting. Interesting stuff!”

Karen Dalstein-Jenkins wrote this..“I remember it very well. Very traumatic for me even at the young age of 6. I was praying hard for my dad and uncle as they stood outside watching it hit. Then driving through the area to see the devastation. My soon to be grade school was damaged and my high school was destroyed along with the little shopping center and library we visited often. We had debris in our yard from corn fields in Kansas. The stories were strange and devastating. One horrible devastation next to untouched properties along with strange deaths like the baby sucked out from under its mother who was lying on top of the baby in the ditch of her house.”

Have a great afternoon and I’ll get another weather blog out Sunday.

Joe’s Blog: Snow could be in forecast next week