Good afternoon, a rather nice day out there today with plenty of sunshine and warming temperatures. We’ve been doing a lot of up and down blogs lately and this will be another one as I continue to think tomorrow’s weather will be warmer than many others think and that Sunday’s weather will be colder than what many think. It just means the ups will hopefully be higher, but it also means the downs will be lower…so it goes.

Rest of today: Sunny skies and milder with highs into the 40s.

Tonight: Fair skies and pleasant (by January standards) with lows around 32°

Thursday: Mostly sunny, windy (this will be the key to the highs) and warm with highs near 60°

As I mentioned at the top of the blog…our temperatures have been all over the place it seems…and while it’s certainly be a colder month (compared to December) it’s overall been…well…average. We’re running a whooping .2° below average through the first 12 days of the month.

December averaged out to 39.7° and was 8.2° above average. This month (and it’s not even early) is running at 28.5° for an average temperature. We were forecasting a late start to winter and it’s working out. From a snow standpoint, I also thought this would be a backloaded snow season…where most of the snow came over the next 6-8 weeks…compared to the 1st 6 weeks of winter (DEC>FEB). It remains to be seen IF that is going to work or not. So far we’re at a whooping 2.5″ at KCI (official for KC). we’ll see. It certainly won’t be snowing tomorrow.

So how warm can it get Thursday. Well during this time of the year, typically you need a lot of sunshine, a lot of wind and a warm air mass in the Plains for us to really start to heat up. I think all of this is in play Thursday. The only issue I can potentially see is perhaps some extra clouds after lunchtime that could impact things a few degrees.

I don’t think we’ll challenge a record high for the 14th…69° in 1952 but I do think IF things click correctly…60° is very doable. Let me show you why…and I want to use a forecast sounding to illustrate my thinking.

Here is the forecast sounding for the temperature and dew point profile through the atmosphere for tomorrow afternoon at 3PM. 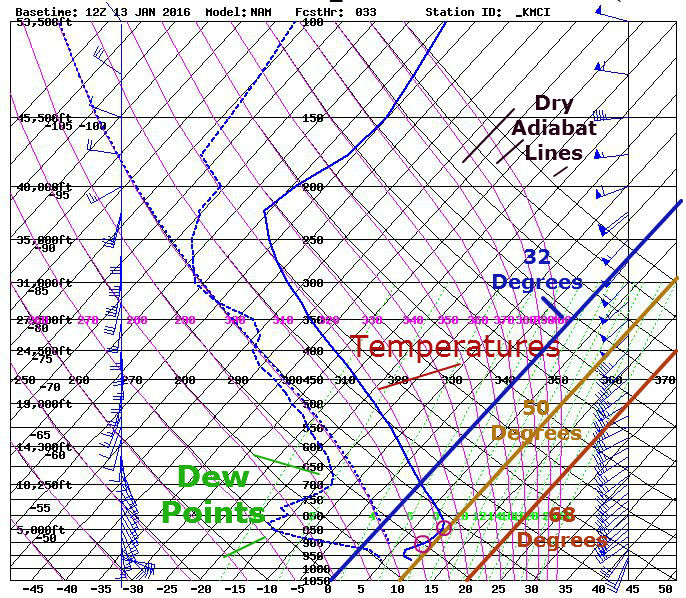 Soundings are very useful to forecasting temperatures but many meteorologists don’t look at them consistently in certain situations and I think tomorrow it’s just another way of seeing IF the “simple” model data that forecasts highs and lows is wrong. as you know I don’t do “simple”…you have to look at the entire picture. If it’s 48° tomorrow (as some “simple” model data suggests) then I over-analyzed the data…if temperatures are closer to or even above 60° then looking deeper into the data was the right approach.

I highlighted the forecasted temperature trace (the thinner blue line) and the dew point trace (the dashed blue line). The more solid and colored lines moving from the lower left to the upper right are the chart temperatures. I’ve enhanced the 32/50/68° lines in different colors.

Notice also on the far right the wind barbs…they show the direction (mostly SW to NE) of the winds and the speeds (each full barb is 10 kts or about 11 mph). Mostly the winds are from the SW at 30-35+ MPH from near the surface upwards to around 7-8,000 feet which is fine for the purpose of this lesson.

Also notice a couple of purple circles. I added those…and here is why. With the forecasted winds tomorrow afternoon as well as enough sunshine…my feeling is that the model data is NOT “mixing” the atmosphere enough. Hence why it thinks the highs will be closer to the upper 40s. My feeling is that with the winds blowing the atmosphere will “mix” more than the model shows…that means the air higher up will work down towards the surface.

When this occurs, given the low dew points (dry air) in place, a parcel 9think of a bubble) of air can warm more effectively. As a matter of fact it can warm up about 5°/1000′ as it descends. So IF we can stir the air a few more thousand feet, that can add 10-15-20° to the temperatures on the ground. It’s a significant aspect of forecasting and again all we need is the air to be stirred up a few thousand feet more and boom the temperatures on the ground are warmer than what is forecasted by some . I think this is the potential for tomorrow and why highs can be closer to 60°

What you do as a meteorologist is try to figure out how high the mixing level will be…let’s say to that 1st purple circle…then you go down the “dry” adiabat line (the black lines that goes from the lower right to the upper left). So IF you mix down the air from the 1st purple circle down to the surface you get a potential 3PM temperature of around 58°. IF you mix down the air from the 2nd circle (around 4,000 feet above us) you get a temperature of 68° (close to record heat). I think we’ll be mixing the air downwards from somewhere in between.

What can plow this up is 1) not enough wind and 2) too many clouds. #1 cuts the “mixing potential and #2 cuts the sun’s heat. Again you need certain things to happen for us to really warm up big-time from our averages during the dead of winter (upper 30s).

Anyway the chart is called a Skew-T chart and they’re helpful in forecasting various weather events including temperatures and winter precipitation types. I’ve shown you these charts before.

I’ve been tweeting and writing that I think forecasters are underestimating the cold that’s coming for Sunday and forecasting highs that are too warm. Here’s why.

Last Sunday our high temperature was 19° at KCI and 23° downtown. We also had rather light winds and full sunshine in the afternoon. That allowed the sunshine to “warm” up the cold air mass a few degrees to get us to those temperature levels.

Let’s compare what is forecasted to come in Sunday and what occurred last Sunday. Let’s go up a few thousand feet into the air. The following graphic is via NEXLAB and it shows the balloon reports from the USA…the closest one to us is a balloon launch in Topeka… 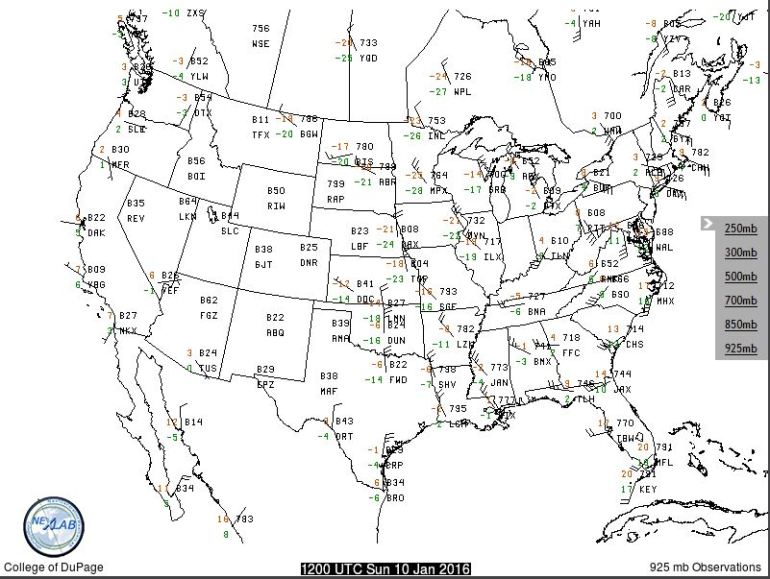 Now the forecast off the GFS for the same level of the atmosphere for THIS Sunday is…a few degrees colder + UNLIKE last Sunday when the next balloon launch indicated the temperature at that level “warmed” up to 14°F, the cold air will be tougher to moderate as quickly…and the forecasted temperatures at that level are going to be closer to 0° as opposed to 14°.

We may have some sort of 12AM highs well into the 20s,,,but I think temperatures drop to around 10-12° by lunch Sunday then come up a couple of degrees. My forecast from LAST Sunday was 16° and I still think that is a solid forecast for this coming Sunday.

Oh and don’t be surprised if we have dusting-1+” of wind blown snow on the ground as well.

More on that Thursday afternoon