It’s Wednesday and the weather is sort of going through a it of a change…enough so that some are actually going to stay dry for awhile it seems…while others will see thunderstorm activity with some locally heavy rains…the flow aloft has weakened considerably and aside from a weak upper level system moving through the southern Plains we’re sort of in no mans land regarding specific storm chances after tonight. That’s not to say it will be perfectly dry through Saturday…it won’t for many…but after tonight’s weak front moves through…there isn’t a lot to focus storm chances on us for awhile…and that could be a good thing for those wanting a break.

Today: Hot and humid with a front moving into the area later this afternoon/evening with a chance of storms…especially from KC southwards. The air will be hot and unstable so some severe weather (hail/wind) can’t be ruled out later today. Highs should be near or above 90°. IF we get to 90° at KCI…that will be the hottest so far this year.

Tonight: Storms end…variable clouds and mild with lows in the 60s

Tomorrow: Maybe a few storms around in the heat of the day with highs closer to 80°

Friday: About the same…

I’m going to get away for a few days…so today may be the last blog…till Monday unless I put together something quick tomorrow AM. It’s time for a break…and Mother Nature may try to take a bit of one as well.

There is a front that will be the focus for storms later today. The air behind the front is not overly cool…but the dew points do drop off compared to the muggy stuff out there right now…here is the 8AM surface map. 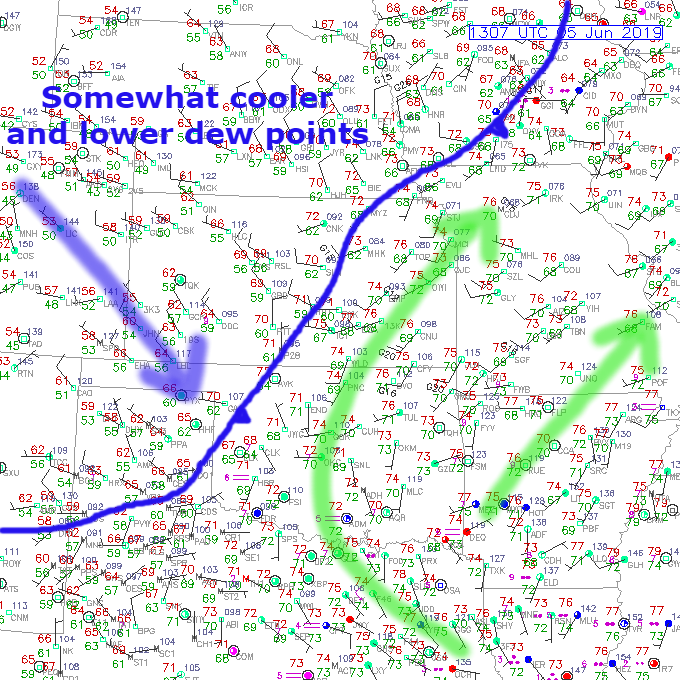 So we have dew points near 70° and we’re ahead of the front…we should see the winds go towards the SW or west as the day moves along. The air above us will be the hottest it’s been all season…a few thousand feet above us the air is forecast to be close to 28° C or 82°F. The winds will have a westerly component…we’re ahead of a front…it seems the perfect recipe for the hottest day of the year so far. We’ve hit 89° already…I think we can do better today…as long as we have enough sunshine out there.

So even if we stay in the 80s today…with dew points near or above 70°…we will get very unstable later today…and with a front in the area…and it being June…I can’t see how there are no storms at all. Something should form…we’ll see about the coverage and how widespread the activity is…especially from KC southwards. Here’s radar.

Let’s see what happens after 5PM or so…you’ll know something is stirring in the atmosphere if/when you see the towering cumulus clouds getting higher in the sky…that’s a “tell” to what may happen later today in the heat.

Winds and hail are the two main threats from the storms today it appears.

The negative to the formation of storms today is that there won’t be a lot of “convergence” with the front. Convergence is a term we use and it’s what you think it might be…in the case of weather it’s two things bumping into each other..it’s sort of like the accumulation of air masses that causes air masses to rise. For stronger convergence you like to see south winds colliding with north winds…which would be where a front would be.

Today we may SW or west winds colliding with NW winds…so the air masses are sort of rubbing against each other but they’re not really hitting each other hard. You can overcome that convergence sometimes though and since this is the wettest time of the year and the atmosphere will be really unstable…I still think storms are possible>likely at this point from KC southwards.

IF the temperatures were cooler…and there wasn’t the instability around…then maybe not.

After this front moves through we’re sort of in no mans land for quite a bit of time. An upper level storm will be moving south of the region.

That’s this thing spinning in the SW US.

Earlier in the week that looked like it would be 250 miles farther north…now it looks more like it will be down towards I-40  which places our area in the far northern limits of that thing. It represents a colder pocket of air aloft really…

Over the next 5 days…it appears (after tonight) that the main focus of organized storms will be down there and not really up here. 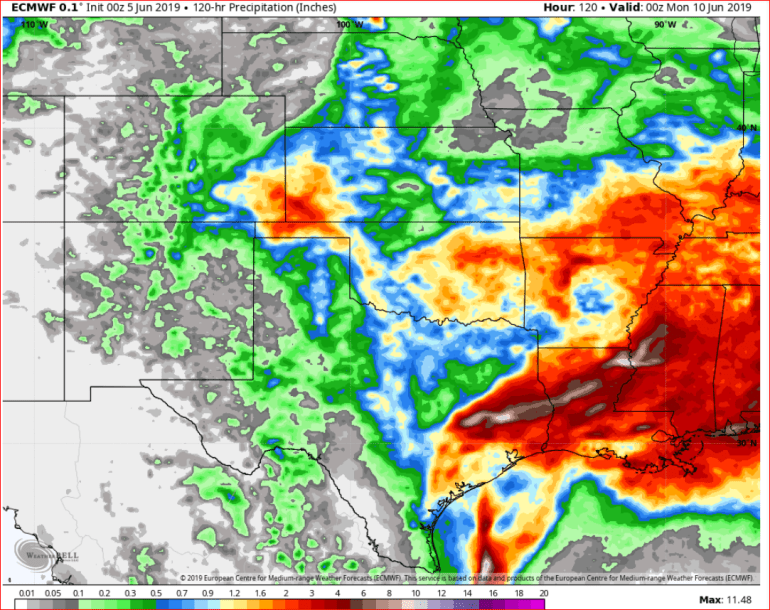 Notice northern MO not really getting much at all.

Now that doesn’t mean we’re off scott free from this…there may still be some storms around…and the pattern looks more summerish (not really temperature wise though) in terms of storms sending out rain cooled air that develop new storms…very random and haphazard.

So after today/tonight…things become less defined it appears for several days. Less defined in these regimes means more scattered and less organized. Flood weary folks should get a break hopefully from the more organized stuff.

River/creek/stream levels are coming down slowly now as well.

Oh and this is interesting…the 8-14 day forecast for the middle of June…for temperatures.

OK that’s it for today…I may update tomorrow…if not…see you Monday.

The feature photo is from Whitney Ramsey of the bad flooding in the Carrollton area. 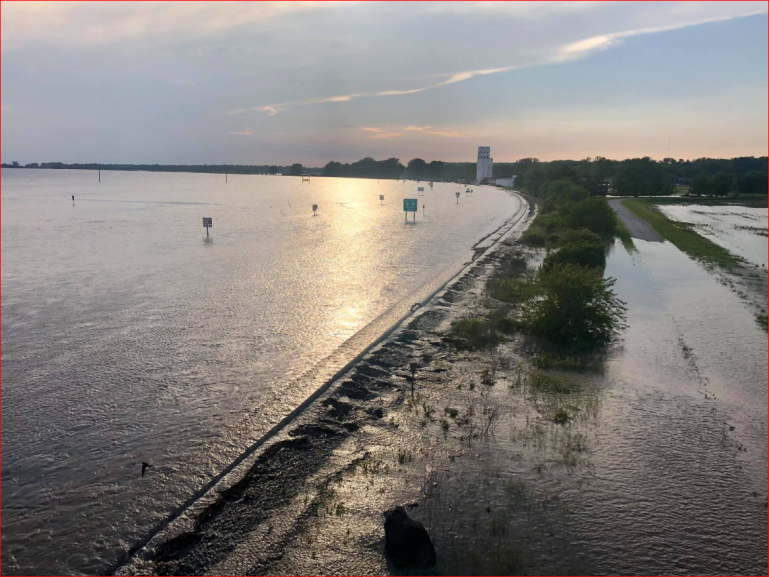