KANSAS CITY, Mo. — Well we were expecting heavy rains, strong wind potential, and tons of lightning. The potential of tornadoes though wasn’t exactly at the top of the thought process.

It was a fascinating night of watching the storms coming into the immediate metro and really, aside from generating all sorts of severe thunderstorm warnings, not really generate any actual severe weather… until they got close to the state line.

That’s when things changed. Along the leading edge of the storms, we started to see some areas of rotation.

Today: Variable clouds with more sunshine this afternoon and highs in the upper 70s.

Tonight: Fair and cooler with lows in the upper 50s.

Tomorrow: Partly cloudy with highs in the 80-degree range. Another chance of overnight storms.

Friday: We break the pattern with partly cloudy skies and highs in the upper 70s.

So it was an interesting night with areas of damage, apparently mostly tree damage, in scattered parts of the area, especially around the West 95th Street corridor in Johnson County. There was also damage reported in a few areas of Jackson County as well.

Here are the severe weather reports…

The void of reports between Topeka, Kansas, and the state line area is interesting. Despite all sorts of warnings, there was really nothing concrete to verify the warnings… then things changed.

Sometimes with these convective clusters coming into the area you can get these little “spin-ups” along the leading edge of the lines coming through. A lot of times there will be small areas of rotation on radar, but they don’t produce tornadoes per se.

That can though indicate little areas of enhanced stronger winds and potentially some wind damage. This isn’t that unusual. We call these QLCS (Quasi-Linear Convective System) tornadoes.

Last night though, it appears that these small little areas of rotation, at least one (and maybe two or three) did indeed produce tornadoes. They’re VERY difficult to warn for in a timely manner. Often short-lived, less than minutes, and often not seen well because they typically occur at night in this area.

The initial warning that was issued was based on a possible-to-likely touchdown near 95th Street (roughly) in eastern Johnson County, Kansas. Tornado sirens were set off and some heard (but some didn’t) the sirens.

Alex immediately was on the air, and I jumped on Facebook, and both of us sort of got folks quickly up to date while some parts of the area were scrambling to the basement.

Within moments after the Tornado Warning was issued for Johnson County, the storm moved into Jackson County, Missouri.

Rotation track data shows this cell basically moving along the 95th Street corridor then crossing over the state line. 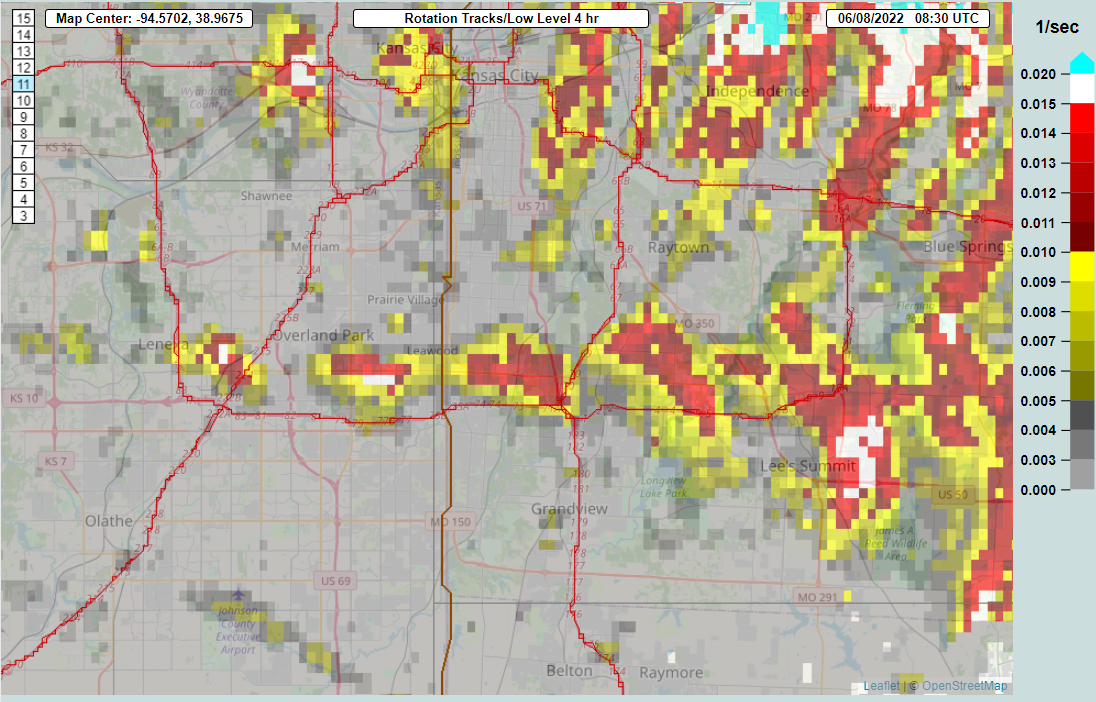 There was another area closer to the Interstate 70 corridor, especially on the Missouri side, that is also being looked out toward Buckner.

As the 95th Street storm moved into Jackson County, the warning was updated and there was a possible sighting near Raytown. No confirmation on that yet.

There was some suspicious rotation on radar especially around the Unity Village area.

Farther north, some other cells were showing the same type thing and prompted this Tornado Warning.

Rotation was seen on radar at least. Again, doesn’t mean there was a tornado (might have been one) but an enhanced area of stronger winds likely at least. There was tree damage that started in the Platte City area with that cell.

And then the storm that was approaching the Buckner-Wellington area on the Missouri side of eastern Jackson County and west Lafayette County.

Again, so far lots of tree damage from these cells and power outages.

I’ll be diving in deeper to the atmosphere ahead of the system later on, but QLSC tornadoes are different animal really. So tough to warn for with tons of confidence. The better-looking indicators on radar often don’t even produce anything. They can drive you crazy trying to not over warn, but yet warn at the same time.

There are some interesting videos that we’ve received so far of possible tornados captured in the area.

We’ll keep you updated later with any additional information regarding the classification of what happened last night.

FOX4 Newsletters: Sign up for daily forecasts and Joe’s Weather Blog in your inbox

After 36 hours of calmness…

Things may get somewhat interesting tomorrow night once again, although perhaps and hopefully not as severe, but another cluster of storms is going to be moving into and through the Plains.

It does look like the stronger instability will be farther to the southwest this time, hopefully meaning we just deal with rain locally and some thunder.

Then we break the pattern with a warmer finish to the weekend and then a hot start to the early part of next week with 90s likely and high humidity.

What to do if you lose traction on wintry roads

How snowflakes form and why two never look the same

Wet weather and post-Thanksgiving travel: What to …