So let’s see…a record high yesterday…66° breaking the previous record from 1902 (64°)…thunderstorms to start the day…freezing rain to finish tonight and an accumulating snow to start the weekend…oh and sneaky fast potent wave on Sunday afternoon that may create some sort of wintry mix later in the game…nope nothing to see in KC weather.

On top of all that…a significant severe weather outbreak today and tomorrow down south of the region…potentially some strong>severe storms in SE KS and southern MO today as well…freezing rain in northern MO…winter storm warnings all over the place…flash flooding possible in parts of MO and elsewhere…nope…nothing to see here.

Let’s get into things…good morning.

Tonight: Slowly falling temperatures…rain slowly transitions to light freezing rain…then some sleet possible. Amounts will be light but with the falling temperatures and the increasing winds…IF we don’t dry things out…we’ll see a flash freeze occur. That means whatever is wet will freeze over late tonight into Saturday morning. Temperatures towards daybreak near 20°

Saturday: Snow develops in the morning…some moderate to heavy snow is still likely later in the morning into the afternoon…2-6″ possible as the colder air deepens and the snow gets fluffier and piles up more efficiently. With that said there are going to be areas that may very well struggle to 3″…and I can’t rule out parts of the Metro being in that area. Temperatures steady around 20° with wind chills in the single digits and blowing snow as well. Bad travel conditions

Sunday: Sunny and cold in the morning…single digits…then increasing clouds with some light precip possible later in the afternoon…could be some light freezing drizzle or snow mix. Temperatures near 30°

So this is a hot mess…and my confidence in the specifics isn’t the greatest at this point. Pretty much everything I wrote yesterday still applies…the forecast will be right for hopefully many areas but it WILL BE wrong for some. Hopefully NOT for the KC Metro…but there remain all sorts of ways this could blow up in my face regarding snow accumulations tomorrow and I’m not too thrilled about it right now.

The data today isn’t really helping my thought process much…in many ways…nothing has changed and in some ways things have changed…which sounds cryptic I know…but there are parts of this I’m not confident about.

Let’s start with what is happening now…all the watches and warnings around the country…from severe weather to winter weather to flooding potential.

Radar this morning has been active at times…and yes you did hear some rumbles of thunder earlier…a few more are possible today as well.

Our next wave is starting to come together in the southern Plains and will lift towards KC this afternoon as the rain increases this afternoon locally.

Some light freezing drizzle may be falling now across NW MO towards the NE/IA border…that will progress southwards this afternoon especially.

There will be some dry times and wet times today…more wet this afternoon it appears from KC southwards at least.

The storm in question is now diving into New Mexico.

and will come into the southern Plains tomorrow and through MO tomorrow afternoon. Overall the track isn’t terrible for snow here.

We though need to wait for the atmosphere as a whole to turn below freezing. This was all explained yesterday but in a nutshell, while we’ll be cold enough at the surface tonight…above us there will remain a “warm” layer of air that will melt the flakes as they fall. In reality that warm layer of air is only a few degrees above 32°. That needs to be eradicated before we can even talk about snow in KC. That will happen tomorrow morning towards daybreak.

Back to the surface…here are the 9AM temperatures…with the freezing line NW of KC…it may not much much today…until early this evening. 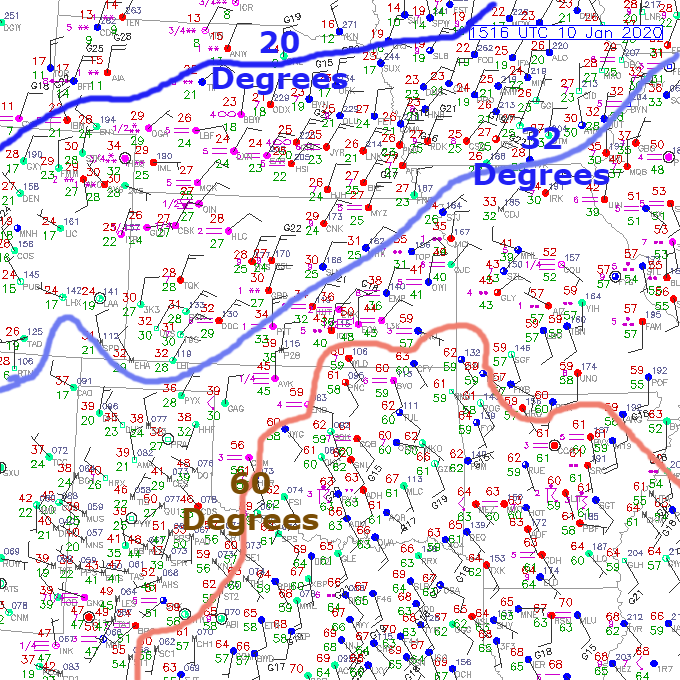 Oh and that’s some cold air up in NE poised to come southbound overnight with the stiffening winds from the north blowing it towards us.

In the interim it’s complicated. As I type this the sun is making an appearance at my house on the south side. Temperatures may start creeping upwards a few degrees before the next wave of rain comes in. We’re in the mid 30s northside to low 40s southside at 9AM…the HRRR model may not be handling temperatures the best but it shows a rather stark contrast this afternoon developing. 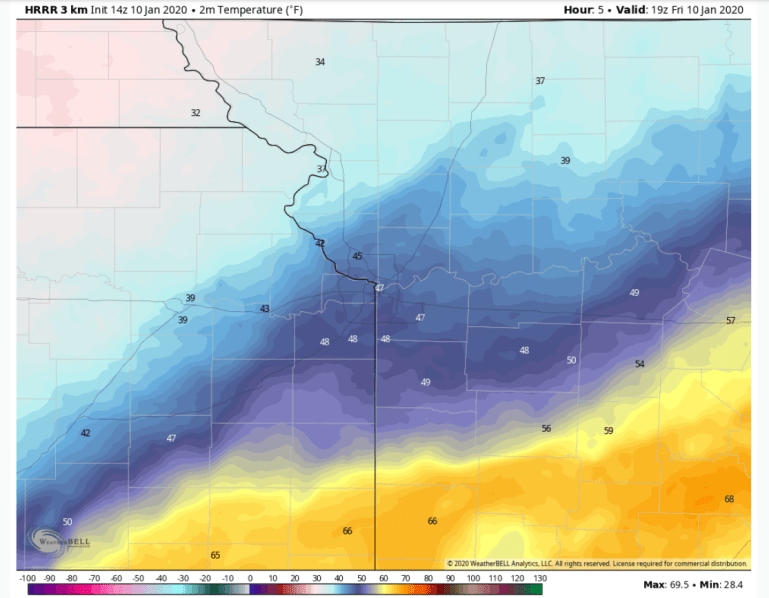 Again perhaps a bit too aggressive and maybe you trim a few degrees from those METRO numbers at 1PM…then the colder air does start to work southwards..so that by 6PM we have this…the freezing line near the St Joe area. 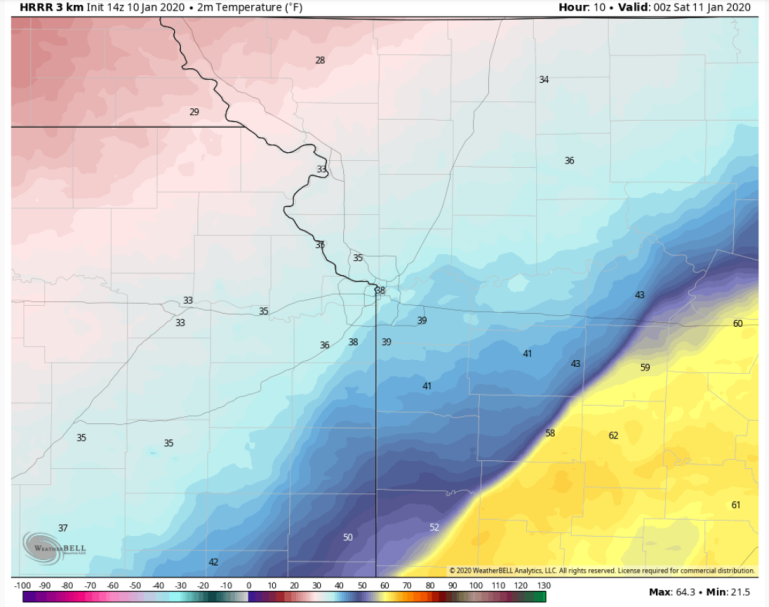 Again this is at the surface…there is that pesky above 32° layer aloft that needs to be wiped away.

So what happens today?

We get periods of liquid rain.

Tonight what is falling will gradually transition to freezing rain…but I’m not confident beyond a glaze of ice (ice is ice…it’ll get gradually more slick…especially on bridges and overpasses later tonight) how much actual ice will fall locally because after the wave of rain comes through later today…there may be a lull again tonight of just some lighter stuff out there. Again a glaze is a glaze but this won’t be an ice storm per say…

I just don’t think we get much overnight tonight…again whatever is wet will freeze and glaze things up so the roads will be impacted for sure…especially bridges and overpasses.

So that by 3AM…these are roughly the forecast temperatures… 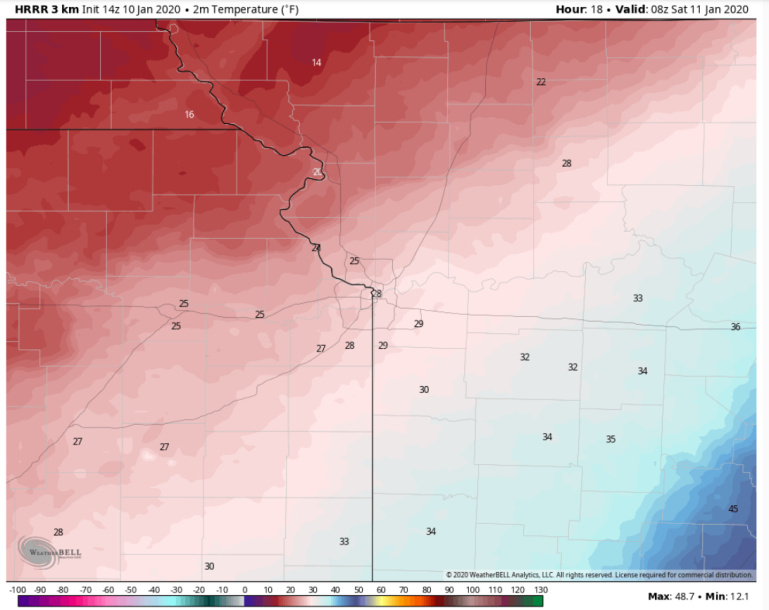 That will freeze everything that’s wet beforehand. IF nothing is falling they can do treatments for the roads though.

Now about the snow.

A Winter Storm Warning is in effect for all of the region.

All that pink you see is the warning. The dark green is the flash flood watch and the light green the flood warnings.

The NAM certainly feels this way for areas east and south of I-35 tomorrow morning…where there may be a period of a few hours with an atmosphere more conducive to sleet or a mix than snow. The hi-res NAM though has a snowpalozza on the Metro.

Here is the forecast off the NAM model… 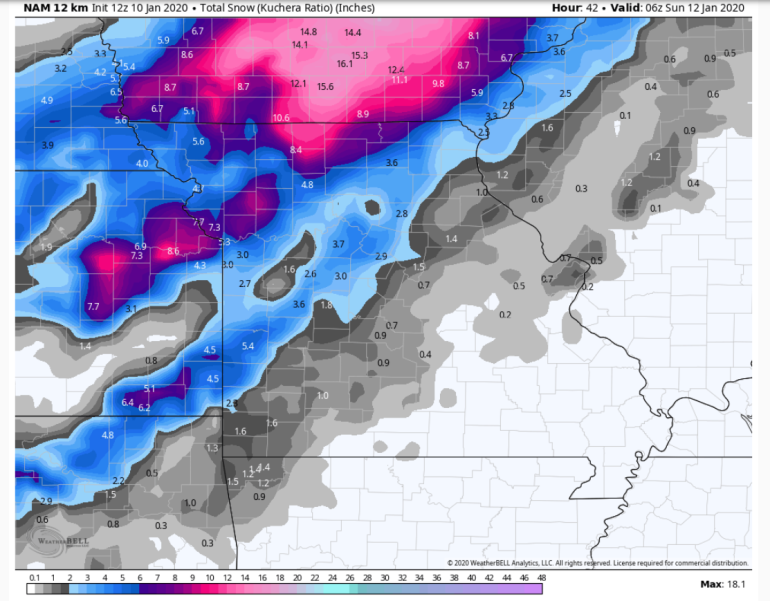 Now the wowza hi-res NAM…it’s been doing this 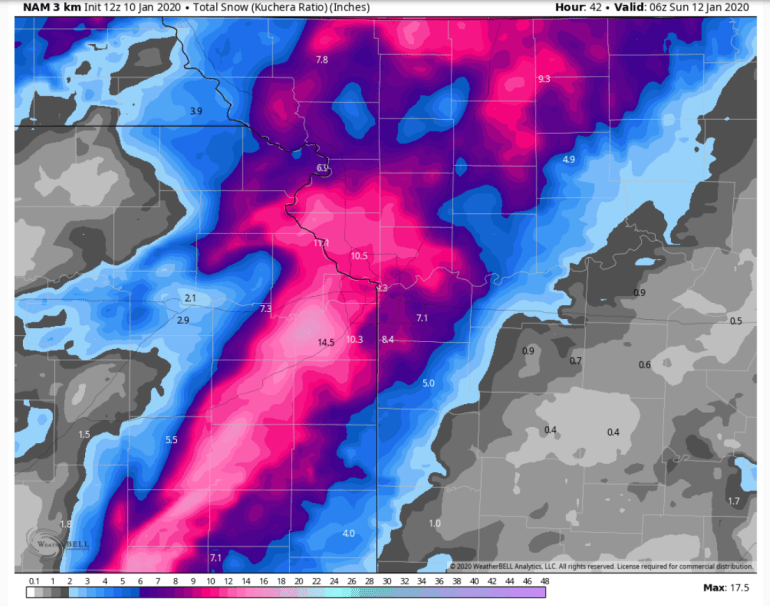 heck even the Canadian model is going for the gusto. 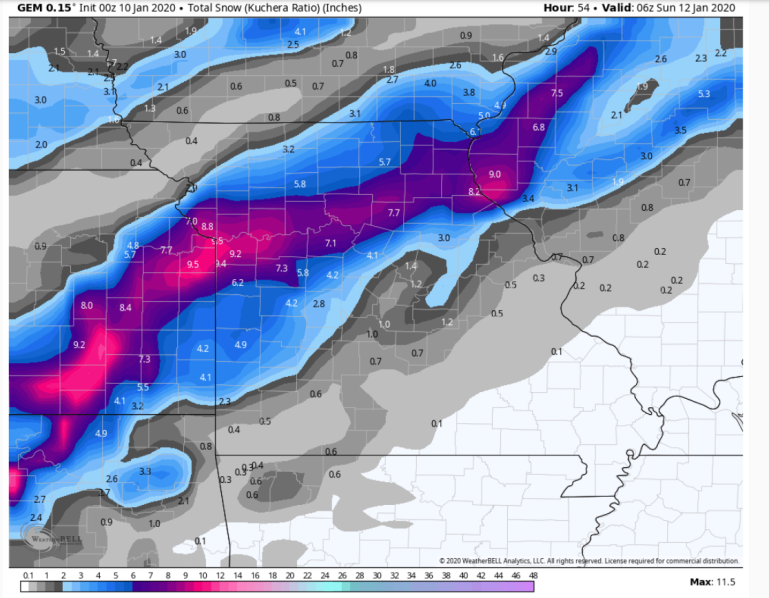 So something white has to happen right?

It will come down to how well the comma-head part of the storm is organized and how it fills in. I know I wrote about this yesterday…IF it’s a healthy comma-head…3-7″ is likely in the KC region (assuming there are now shifts in the track). IF it’s unorganized and not solid and filled in well…sort of broken in nature…then the amounts will struggle to 3″ and parts of KC will struggle even more.

NW MO is really a toughie for forecasting snow with this…in terms of the amounts. I just have a feeling the worst will stay south of them tomorrow in terms of snow…and perhaps tonight as well.

Hopefully the snow aspect comes through on this…because to me that is how we’ll be “graded” when this is over and done with.

Next up…and this blog is getting long…is Sunday afternoon. There is a potent wave coming our way. The atmosphere is going to try and recover moisture…but there is a lot happening. Don’t be shocked…as I mentioned last night…of some sort of wintry mix developing at some point in the 2nd half of the game. It should be light and not impactful BUT I can see this weird path where there is some sort of weird wind blown something coming through that people will be saying no-one said THIS was going to happen…except I said this could happen last night.

More on that tomorrow or Sunday…one mess at a time.

My feature photo comes from Ron Ferguson‎. It looks like the sun but it’s the moon. 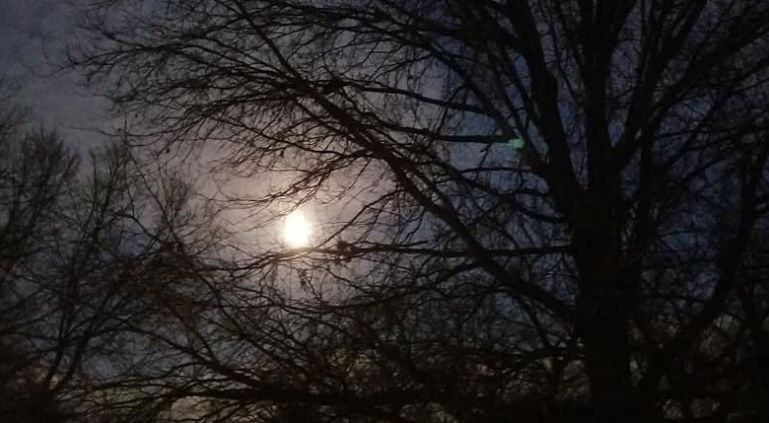