Good morning…a cold one to start the work week as temperatures have dropped to around 12° this morning at KCI. One thing about these colder air masses this winter…I’ve underestimated them several times…I thought I was a touch too low going for 15° for a low…and even that was too high. The wind chill factor was around 0° as I started this blog this morning. That will get your attention! So today should be a struggle to warm-up…30° might be a push. Overall though aside from some ups and downs this week…the work week itself looks uneventful. We’ll see about snow chances over the weekend.

Today: Partly to mostly sunny and cold with highs around 30°

Tonight: Quick drop off into the teens then temperatures may start to level off as the winds switch more towards the SE/S.

Tuesday: Increasing winds as the day moves along and not as cold with highs into the mid 40s but it will feel colder with the winds gusting to 25 MPH or so.

Wednesday: Sort of a tricky day for temperatures…highs should be around 50°. There is both some up and downside to that…I’m bothered by a weak wind shift ahead of a stronger cold front that may keep the mixing down and keep temperatures from reaching their full potential. Areas south of KC may get warmer than north of KC as well.

Just to clean up from yesterday…the EURO last night came around to the GFS idea about a pretty nasty shot of cold air for Sunday…actually later Saturday into Sunday…including the possibility of some accumulating snows…so Sunday may be a day where temperatures don’t get above 25°…heads up.

More on that in the next few days…

Today I thought I’d write about an interesting astronomical event. Not so much because individually the things that are going to happen are rare (they aren’t) but what makes this special is that the next few things that are happening on Wednesday morning before sunrise ALL happen at the same time…that makes it rare! As a matter of fact the last time this happened was back in 1866 I think.

I’m talking about the Super Blue Blood Moon or whatever they’re calling it.

Let’s break it down.

On Wednesday morning…before sunrise…look towards the western horizon. You will see a full moon somewhat low to the sky. No big deal…but the moon might be a a bit brighter or bigger than “normal” that’s because the moon is actually closer to the earth…and at “perigee” which is the opposite of apogee (when the moon is farthest away). Also the moon is also being eclipsed and to top this off…this is the second full moon of the month, which is called a “blue” moon. This happens about once every 2.7 years or so. So there is a lot happening at the same time…

Let’s break it all down…

The blue moon occurs as I mentioned when you have two full moons in one calendar month. This is actually more rare than having the other things that I’m writing about this morning. The “blue” moon…as in the saying “once in a blue moon” happens every 3-ish years or so. The last one was back in late May of 2016 and the next blue moon will be on…wait for it…March of 2018! So this year there will actually be double blue moons in 2018 which only happens 3-5 times in a century. The last time that happened was 1999 and the next time that happens will be 2037.

Now onto the super part of things. As we know the moon orbits the earth…and the earth orbits the sun. The orbits however aren’t perfect circles…they’re more like ellipses. So as a function of the orbit…there are times the moon is closer to the earth in distance…and farther from earth in distance. When the earth is closest…we say the moon is at perigee and when farthest away we say the moon is at apogee. On Wednesday morning the moon will be at perigee. It will be some 222,068 miles from earth. This is the 3rd super moon in a row. It was actually closer on JAN 1st (221,559 miles away) and in the end will be closer in July and August than it is now. by the way…when we get the full moon in February…it will be some 252,090 miles away…a difference of some 30,000 miles! The end result of this is when the moon is closer to earth…like on Wednesday AM…it will appear bright and perhaps slightly larger than average.

OK the moon is “blue” (it’s not really blue colored) and it’s going to be super (closer and brighter).

Now onto the “blood” part.

About 2-3 lunar eclipses occur each year on average. One is scheduled for Wednesday morning starting around 5:45 or so. The earth will come between the sun and the moon as each orbits around each other. As you might imagine…to get the perfect set-up like this with several moving parts…it doesn’t happen too often each year.

So as the eclipse happens…and since the earth’s shadow will cover the whole side of the visible moon…we see the full shadow or “umbra” in the image above. Here are the other lunar eclipses for 2018. Why is it called a blood moon? That’s because the earth’s shadow on the moon casts a reddish color. Here is the set-up via timeanddate.com

“As the Sun’s rays pass through the atmosphere, some colors in the light spectrum—those towards the violet spectrum—are filtered out by a phenomenon called Rayleigh scattering. This is the same mechanism that causes colorful sunrises and sunsets. Red wavelengths are least affected by this effect, so the light reaching the Moon’s surface has a reddish hue, causing the fully eclipsed Moon to take on a red color.”

So when does all this happen…the folks at timeanddate.com have a great recap as well that I cut out for you. There is also a good video on that site to check out. 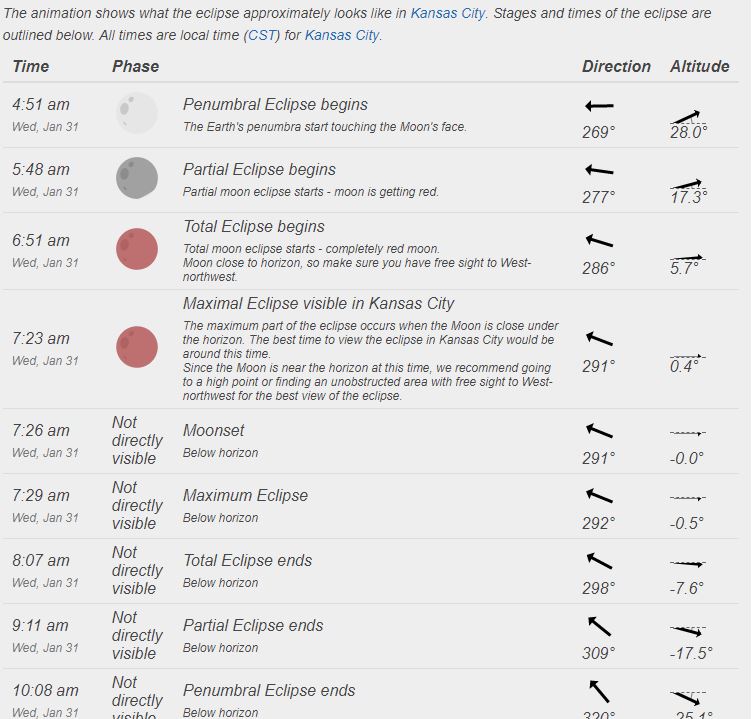 Really the window to see this…in all it’s glory is especially from about 6:51 am to about 7:15 am…much later than that and the moon is going to set in the western sky. By 7:26 am, as the sun is coming up in the eastern sky…the moon will be below the western horizon.

As the graphic says…IF you can be in a higher spot that would be helpful as well…so you can see as far down towards the horizon (without trees etc) to see the “most” of the phenomena.

IF you want a neat NASA video explaining everything that I just wrote about to show the kids…here you go.

So there you have it…EVERYTHING you ever wanted to know about the super blue blood moon.

How about a nice feature photo to finish off the blog today…from Lara Bee…of the full moon earlier int he month. 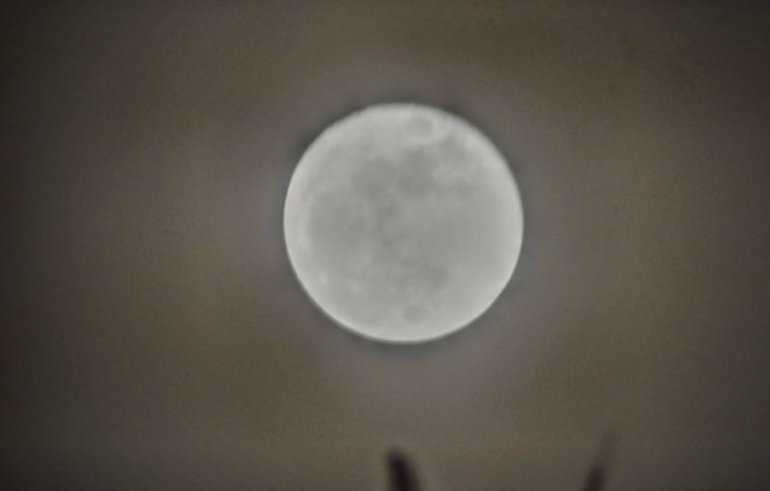 Blogs will be a bit irregular this week.