How many remember the parade celebrating the World Series win in downtown KC. Sure all of you do. Do you remember the Royal Blue skies that day…or the highs that were between 70-75° that afternoon? The average high for 11/3 (parade day) was 60°. The average high for Sunday (Opening Day) is 62°. Highs on Parade Day were 10+° above average…highs for Opening Day with the same type of Royal Blue skies will be closer to 80°! Incredible for both events. The only negative for Sunday will be the gusty winds…20-35 MPH potential.

Rest of Saturday afternoon: Sunny and pleasant. Highs near average around 60°. Winds NW at 15-25 MPH

Tonight: Clear and cool but not as cold with lows near 40°. For Sporting KC, temperatures will be in the 50s and dropping into the 40s

Sunday: Windy and warm with highs near 80° and SW winds of 25-35 MPH…perhaps even a gust closer to 40 MPH. Sunny skies all day.

Monday: Somewhat cooler and pleasant with highs in the 60s

This blog will be somewhat shorter than most and basically a recap of the expected Royals forecasts for the games on Sunday and Tuesday. There are storm chances showing up for Tuesday and my hope is that the potential waits till after the game…but it may be close in the evening.

First of all for Sunday. This day will be warm…it won’t break any records but it will be phenomenally warm for an Opening day…probably one of the warmest in recent memory at least during the daytime hours. With the game scheduled for sunset, the temperatures will be dropping off. So we’ll go from about 80° to about 70° for 1st pitch…down towards 60° by the end of the game. As I mentioned earlier in the blog, the winds will be cranking. It sure seems like we’ve had a lot of wind over the last few weeks and Sunday will be no exception…30-40 MPH winds are not out of the question.

With all that wind happening the atmosphere will be VERY well mixed. Actually forecast soundings show the mixing level going up to about almost 10,000′ or so. This isn’t uncommon but then again it doesn’t happen a lot either locally. IF the winds were stronger up at that level, we’d have even higher wind gusts on the ground…overall though this is a warm look with the wind direction being from the WSW.

Notice how this affects the temperatures…and the model may not be warm enough in parts of the Plains where this “mixing” will be on the extreme side.

By the way…do you see that cold air towards the Lakes region and into the NE part of the country? Remember about 2 weeks ago how I had concerns that we could be impacted by that? Well when the data came out last Sunday evening strongly showing it would stay away…it was a major sigh of relief, because that is some pretty crummy cold weather up there..all sorts of snow in the Lakes through New England coming…as a matter of fact there may be thundersnows + 50 MPH winds in New England Sunday morning!

There is also a LOT of wind in the OH Valley and this will be moving towards the NE tomorrow.

So aside from the wind locally…we’re good on Sunday…

Now as far as Tuesday goes…a cold front will be getting closer. Winds will be on the increase again rather quickly later early Tuesday and into the day. Above the surface the winds will be 50-60 MPH above 6000′ or so. With high pressure building in on Monday the higher dew points will be shoved southwards in the afternoon.

So the moisture comes up towards the west of the state line Tuesday afternoon.

There will be a cold front in central KS later Tuesday afternoon/early evening. Here is the forecast map off the NAM model for 7PM Tuesday with the front out west. As long as that plays out, the higher storm chances will remain west of the area Tuesday through the game it appears. It will be windy again on Tuesday and highs may be close to 70° 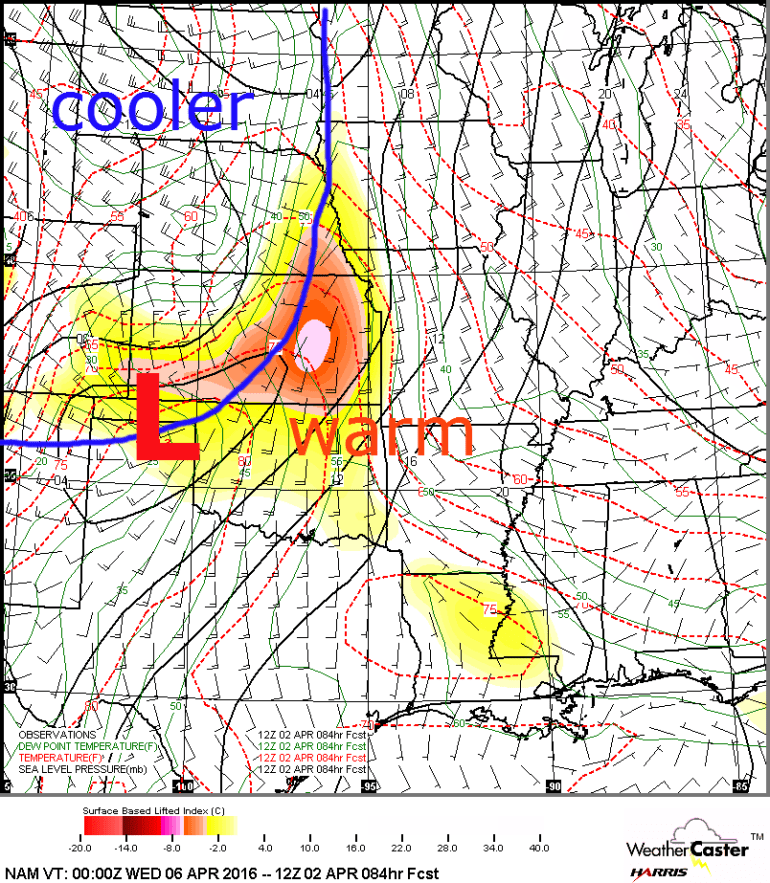 With that said, there are timing differences with the front. Both the GFS and the NAM model are keeping the front west of the state line through the game…the EURO on the other hand has the front on the doorstep towards the end of the game. Should the front be faster…the rain chances would be quicker to arrive into the area. Right now I’m favoring the slower solutions to the front timing…it needs to be watched though. Right now I’m not overly excited about severe weather with this because I’m not sure how much moisture will get here in time for the storms since the main push may be farther west during the day on Tuesday however the winds Tuesday evening above us will REALLY be going…so IF there are storms..the potential of some severe wind gusts (58+ MPH) may become possible.

Regardless expect another windy day on Tuesday afternoon for the 3PM game…but again another mild afternoon on tap!

If you want to stretch things out for NEXT weekend’s home series with the Twins…looks pretty good right now at least for FRI>SAT…with initially mild and maybe breezy conditions again on Saturday evening.

So there you go a blog dedicated to sports weather. No blog tomorrow as I’m off and will be heading out to the game. I’m a season ticket holder.