A new month has started and after a warm September overall (4.7° above average) and overall the 18th warmest in KC weather history. Pretty impressive…and now pretty dry as well as we really haven’t had any substantive rain in quite some time now. Not unusual for the fall season but we can certainly use a good drink from above and there really isn’t anything coming for about a week or so. This means the forecast for the next 5+ days should be pretty cut and dry.

Today: Sunny and pleasant with highs 65-70°. We may have a few more clouds this afternoon filtering out the sunshine a bit.

Tonight: Filtered moonlight and cool with lows in the 40s

Tomorrow: Mixed sun/clouds and potentially a few degrees cooler because of the clouds with highs in the 60s.

This Weekend: Partly sunny and cool with highs in the 60s to 70° on Sunday. We should stay dry.

A new month…but the same dry weather pattern continues near the KC area. as a matter of fact I noticed this morning that the latest drought report is starting to highlight the dryness across parts of E MO at least. I don’t expect full fledged drought conditions to be a problem anytime soon but it has turned dry in these parts over the last several weeks for sure, if nothing else. We’ve seen a doubling of the “abnormally dry” conditions on the MO side in the latest drought report that came out this morning. 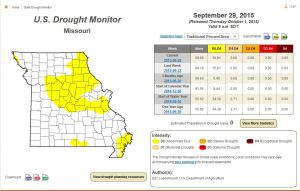 On the KS side, just for comparison we’re in pretty good shape overall with the exception of parts of west central KS which is under moderate drought conditions… 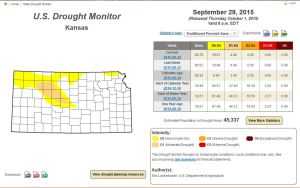 So September was pretty dry for many out there overall. It was also pretty warm as I’ve written about numerous times in the last several weeks…the 18th warmest for KC! 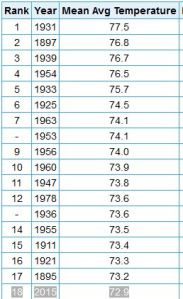 There really doesn’t seem to be much rain in the forecast until potentially the end of next week. Something to pay attention too obviously because of the ALDS starting in KC next Thursday. It’s a long ways away though and the chances will be tied to a strong wave that will be dropping through the western part of the country over the weekend. It will then waffle around in the Rockies for some time before kicking out into the Plains. How strong it is and what kind of shape it’s in when it finally gets closer will help/hurt the potential rain scenario. So really I wouldn’t expect any real concerns with the true chances of rain later next week until the early part of next week when we get a better handle on the wave itself.

Regardless some milder weather will be on tap for the area next week ahead of the wave itself.

The real weather story though has been the evolution and intensification of Joaquin in the eastern Bahamas for the past couple of days. It’s an impressive hurricane that is getting stronger this morning.

There are indications of an eye starting to really develop as well. As of this morning the intensity is close to 120 MPH and it appears the the central pressure of the storm is still dropping indicating a strengthening hurricane. Here are the infrared pictures showing the developing eye better this morning.

For those that don’t follow this stuff as compulsively as I do (in other words you’re normal ;) ) this has been a storm that has been giving meteorologists fits. From the Tropical Prediction Center down to the weather nut…watching the model data has been fascinating. Many of the models have shown some rather devastating scenarios playing out from NC northwards to New England over the past couple of days. A couple of models (the noted EURO model) though have had more of a scenario when the hurricane itself goes OTS or Out To Sea.

NOAA has been launching extra weather balloons in the SE part of the country and also flying more high altitude recon flights into and around the storm to get better data into the modeling. This then is hoped to allow the models to create better forecasts for the path and the biggest impacts from the storm itself.

There is also a EURO vs GFS battle in the models that is keeping us entertained, just because of the tracks that the models have been creating. The GFS model has undergone a lot of “improvements” over the past couple of years, improvements that the NWS higher ups are VERY proud of, perhaps overly so in my opinion. Overall the EURO model still consistently outperforms the GFS model for the northern hemisphere on a pretty consistent basis. Goodness knows it’s not perfect but this is an interesting “battle of the models” going on with regards to Joaquin.

Last night the GFS model flinched. The EURO has been keeping the hurricane consistently out to sea while the GFS has had landfall in the US for numerous runs. Other models have done the same as well with US landfall. Well last night the GFS started to push the land fall farther and farther north…then early this morning it actually kept the hurricane offshore. 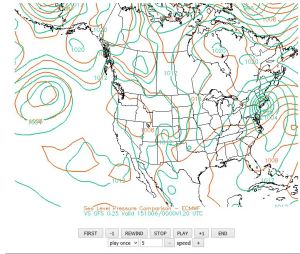 Notice the LARGE difference in the center location of the storm. It goes from NYC on the GFS to closer to Bermuda on the EURO. The next run of the GFS pushed the storm more out to sea so that it threatens Nova Scotia more so than the NE part of the country.

Imagine now being in the Tropical Prediction Center and having to issue a forecast where there are these large uncertainties. Their tracks lately have been more up the eastern seaboard. This morning they shoved the track a bit farther eastwards but still up the east coast.

With all that said, I think they’ve done a GREAT job conveying how unpredictable this has and will be and why areas in the “path” of this storm need to be prepared and to just follow things.

I’ve mentioned this before, but I think there needs to be a different approach to these “longer range” forecasts. They are now issuing forecasts 5 days into the future…when in reality there are times that the science of meteorology won’t cooperate. They’ve done an extremely good job conveying the unknowns about the storm. So why not just issue a 3 day forecast and say there is little confidence in what happens after that. Then when there is more confidence in a certain storm/path in the future then issue a 5 day outlook.

While us weather geeks look at the models consistently, the common population doesn’t. If the vast majority of people heard their local TV guy say, there is no confidence in what happens 3 days from now and their graphics DON’T SHOW what will happen after that…perhaps that would help out with the overall message of the low confidence in predicting these things. Despite all the low confidence stuff though, weather people are showing the 3-5 day forecasts which, odds are, are going to be terribly wrong. Newspapers are still publishing the information, media all over are still showing the information.

It’s only my opinion but I feel sometimes less information about, what odds are won’t happen, is better than more information about what won’t happen. Does that make sense? Again I feel that the statements that have been put in the various discussions have been spot on with conveying the uncertainties…I think the graphic side of things needs to catch up on all different levels.

So with all that said, there is a somewhat interesting combination of weather features out east that are going to create some torrential rainfall for some. The rainfall may in fact end up being the worse aspect of what happens over the next 5 days back east.

Check out the rainfall forecast from the WPC (Weather Prediction Center) for the next 3 days…and this is not because of any direct rainfall associated with the hurricane.

There are 12″+ rainfall forecasts for parts of the mid-Atlantic region. That would create some terrible flooding in a somewhat mountainous area of the country (western NC). So regardless of what happens with the hurricane…there is still some terrible weather that is going to effect that part of the country.

Hey in the end…this still could be a BIG event for the eastern US. There are certainly NO guarantees that the EURO is correct with an OTS solution. There are NO guarantees that the GFS is correct with a track now out to sea as well. There are NO certainties, at this point, with regards to Joaquin and it’s future. IF I was working along the east coast…I would attempt to just show a 3 day track and say after that to be just prepared for eventualities.

Stressful times for sure for folks who deal with this stuff in the eastern US.

Have a great Thursday and enjoy our beautiful weather in KC!