Good morning…to say it’s windy out there would be an understatement. Gusts are near 45 MPH in areas…and in some cases there are some snow showers around as well. Clouds are flying from the northwest to the southeast…and there are even some breaks in the skies. Colder air is pouring southwards…not terrible cold, but with the wind blowing wind chills will be in the teens for most of the day.

Today: Variable clouds with snow showers scattered this morning in the region. Pretty steady temperatures overall today with highs around 32° or so…give or take.

Tonight: Mostly cloudy and cold with lows in the 20s

Tuesday: Partly cloudy and chilly with highs into the 30s. Not as windy but still a pretty stiff breeze out there on Tuesday

I wanted to step back and talk about yesterday to start the blog off. We had high temperatures into the 50-55° range…and later in the afternoon you may have noticed a developing cumulus cloud field. Eventually later in the afternoon and into the evening those clouds developed enough to start cranking out precipitation. What was interesting is that the air close to the ground was “warm” and dry. While the air a few thousand feet off the ground was cold and in some cases saturated. This allowed snow to form in the clouds above us…when that snow feel into the dry air, a lot of it evaporated. This is what we call virga. Some of it though did in fact make it to the surface so we actually had snow flakes with temperatures close to 50°. It doesn’t happen often around here…but I do remember occurrences in the past with temperatures well above freezing. It made for some stunning pictures. 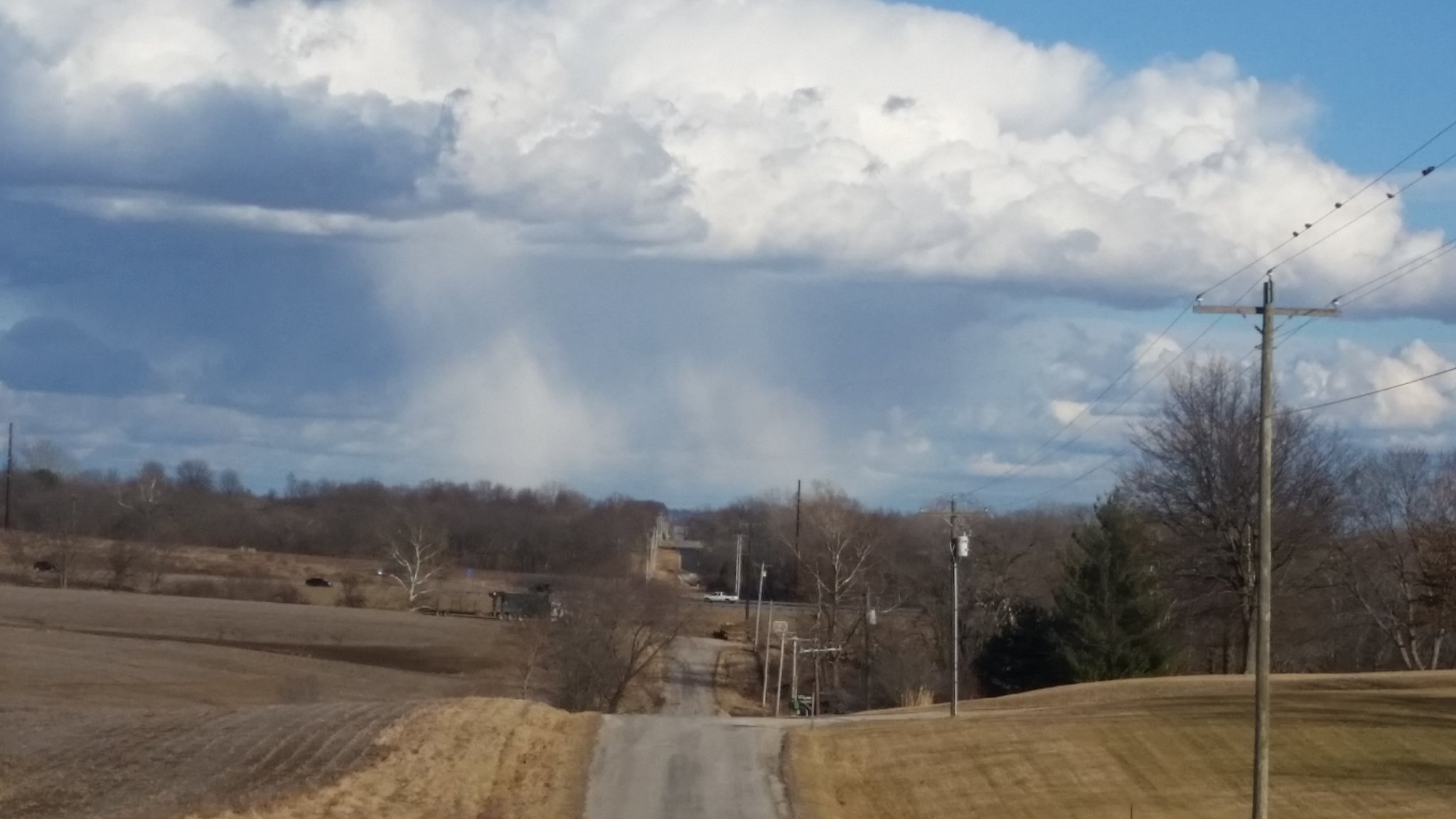 Notice in the picture above the “fuzzy whiteness” to what’s coming out of the sky. That is snow falling from the cold clouds and air near the Kearney, MO area (thanks Lance). In much of the case yesterday the air at the surface was just dry enough to prevent the flakes from reaching the ground…they evaporated. In some cases though…the lowest part of the atmosphere was overwhelmed by the falling flakes. So something reached the ground. It may have been a sprinkle…or some snowflakes too. 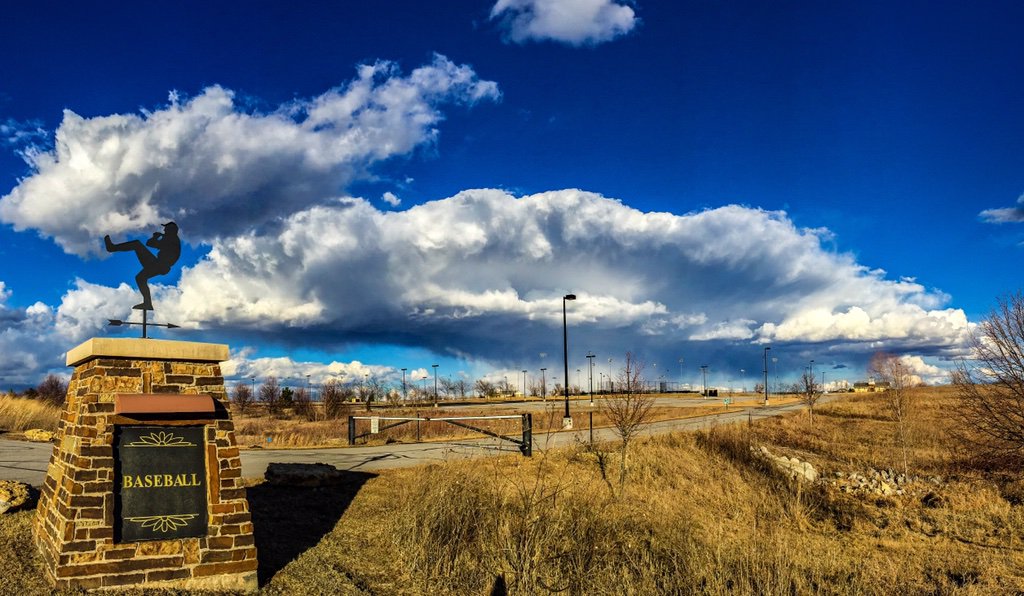 Mark (@dadiosradios959) took this picture from the Lees Summit area. Just beautiful. It’s a common sight to see out in the drier desert areas…typically it would be rain falling in the summer months into the dry desert air…but it was interesting to see.

So anyway there is a new weather term that some of you learned about yesterday…virga. Here is another picture that crossed my twitter feed.

Onwards to the winds today…it’s blowing out there…here on the ground and above us too!

The next map shows the 7PM winds and gusts in RED with the temperatures in black. The winds are blowing from the NW to the southeast 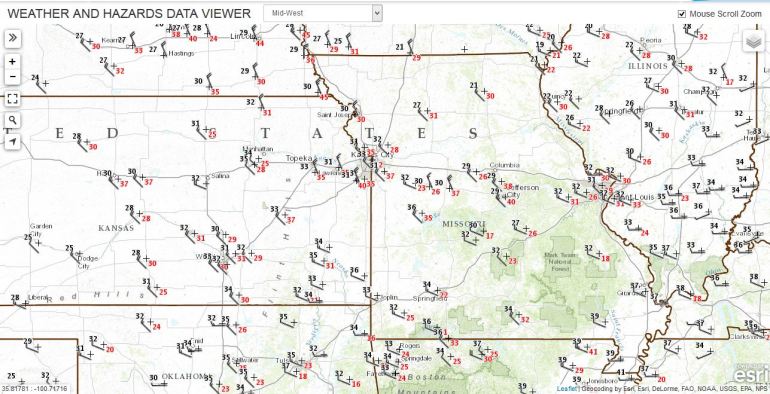 These winds are circulating around a surface storm up towards the Great Lakes area…as the following map will show. The black lines on the map are called isobars or lines of equal pressure.

As the surface low in the Great Lakes moves farther away over the next few days…the winds will decrease.

There is a stronger surface storm off the east coast of the US…notice it yesterday off the Carolinas then today moving towards off the coast of New England. it’s bringing blizzard conditions to parts of New England.

Here is a look at the regional radar for the NE part of the country…most, if not all of that is snow falling.

The satellite view though of the storm is and has been spectacular for the last 18+ hours as the storm went through strong deepening yesterday.

GIF: Wow – take a look at this high-res satellite loop from this morning of the storm impacting the Northeast! pic.twitter.com/fkRQkOa8tl

I wanted to bring this up because there was awhile last night that the storm was packing winds of close too 100 MPH in the southern part of the system. Yes you read that right…around, and perhaps above in spots, 100 MPH. This of course led to high waves…20-30+ feet…maybe even higher. Imagine being on a cruise in something like that. The good news is that cruise ships keep a careful eye on the weather…since they’re really not meant to cruise through essentially hurricane conditions (in this case about the strength of a category 2 hurricane according to reports).

Ahhh the Anthem Of The Seas. Holds close to 4200 passengers…overall about 5000 people. Departed the NY area sailing southwards towards Port Canaveral in FL.

#AnthemOfTheSeas departed New Jersey for Port Canaveral on Saturday. The ship is now moving away from the storm. pic.twitter.com/bNruJZRA8K

Apparently somebody didn’t mention that they might be cruising through a rapidly intensifying storm because there was a while yesterday that all were confined to their cabins as the ship was plodding through the storm.

Top wind speed we've been fighting this evening was 150 mph. Crazy. No plans to move for another 3 hours right now pic.twitter.com/YPI6ewcUZt

The storm was WELL forecasted for that part of the ocean area…we knew that it would intensify rapidly and that winds were going to be a big issue with it….now the money quote.

“Royal Caribbean’s 168,666-on Anthem of the Seas experienced “extreme wind and sea conditions” that were not expected as it was sailing south from the New York area to Port Canaveral, Fla., according to a Royal Caribbean statement sent to USA TODAY.”

Look I have no dog in this hunt…but I do know those ships aren’t supposed to go through that type of storm with that wind and wave heights associated with it…let alone with a number of people the size of a small city along for the ride. Just crazy and hopefully something good will come from this down the road.

Cruise lines are typically very good about getting themselves positioned outside hurricane influences…something clearly didn’t go right with this particular situation.

Have a great day and if today is garbage day…