Did you know that technically there isn’t a solid definition of a heat wave. There is a rough definition but it really doesn’t apply to our particular region (or for that matter most of the country). That definition is in the American Meteorological Society glossary that I just looked up. Here is it…“To be a heat wave such a period should last at least one day, but conventionally it lasts from several days to several weeks. In 1900, A. T. Burrows more rigidly defined a “hot wave” as a spell of three or more days on each of which the maximum shade temperature reaches or exceeds 90°F. More realistically, the comfort criteria for any one region are dependent upon the normal conditions of that region. In the eastern United States, heat waves generally build up with southerly winds on the western flank of an anticyclone centered over the southeastern states, the air being warmed by passage over a land surface heated by the sun.
See also hot wind.

Then there has been this effort…

Some feel a heat wave in our region is 3 straight days of highs 95° or above. Well during this time of the year the average high is around 90° anyway. Some long bouts of extreme heat, for example 2012, have occurred during droughts…when the dew points are rather low. In 2012 that was the case. Sometimes we can have temperatures in the 80s with dew points near 80° leading to what it actually “feels like”…and it’s worse that 100° with lower dew points. Is that a heat wave?

So there are no good “true” answers for this…it’s actually somewhat arbitrary it seems like…regardless you’ll probably be hearing a lot about the heat in whatever forecast you read or watch about heading towards next week.

Tonight: There is a chance of a few late afternoon/evening showers in the area. The chance for any one spot appears to be 20%. Lows will be a bit more bearable with readings closer to 65° by daybreak.

Sunday: Partly cloudy and getting muggy again towards the afternoon. Highs near or above 90°. SW winds 15-25 mph will provide some relief. Rain chance around 20%

So about the heat…

It’s coming and the issue will be 1) how long does it last? 2) dew points during the days (higher means even more of an heat index to factor in) 3) will there be any rain in the region (sometimes even IF the rain doesn’t impact our area sometimes the debris clouds can give you a brief respite.

Odds are favoring the heat to really build in starting Monday. Highs essentially for all of next week (through Thursday) appear to be in the 95-100° range with heat index values surging above 105°. There may be a subtle drop-off in the highs towards next weekend but it’s still hot.

The models that we look at are in pretty good agreement. Take a look at Tuesday AM. This next graphic allows you to slide the bar right or left. It reveals the temperature anomalies for roughly 5000′ up. Obviously, given enough sunshine and absent other weird things, the higher the anomaly the higher the temperature.

Now let’s move to Wednesday AM

Beyond that it gets slight more murky as the GFS pulls the worst of the heat farther westwards…while the EURO keeps it going through the region…the GFS would suggest at least the chance of the area being vulnerable to rain chances…while the EURO through next weekend isn’t so optimistic. 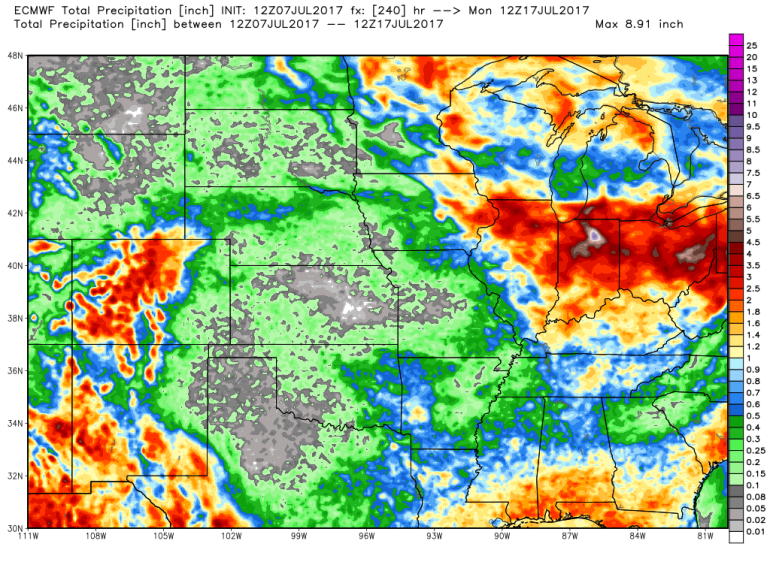 While the GFS model offers this… 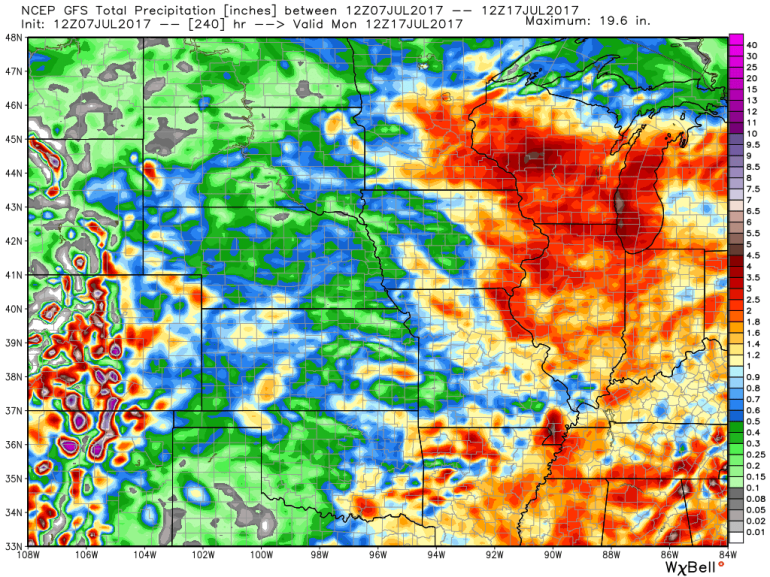 We’re somewhat splitting hairs around KC proper with guidance suggestion under 1/2″ or so through the 17th. There is a difference though in northern MO.

We average about 1.5-1.75″ over these next 10 days…but during July, as you well know, unless you get some of the overnight or AM thunderstorm clusters come through…it’s tough to get widespread rains towards mid summer.

In other weather news…I had mentioned in previous blogs that the 1st 6 months were the 7th warmest in KC weather history…some other information cam out today indicating the scope of the warmth nationwide. It war the 2nd warmest start in the US (through June 30th)

January to June 2017 was record warm for 4 states and near average for 2: https://t.co/dasrGPl7tA #StateOfClimate pic.twitter.com/Q9PZxbCgum

Locally the 4 state area was darn toasty. Led on by a crazy warm winter…

Some data out this morning shows just how hot the start of 2017 has been in the 4 state area. pic.twitter.com/K6uKhBRuck

The contiguous U.S. has seen two floods, a freeze, and six severe storms in the first half of 2017: https://t.co/dasrGPl7tA #StateOfClimate pic.twitter.com/dnJhbn4K62

That’s it for today…start thinking about staying hydrated next week IF you work outside especially…doesn’t look too pleasant that’s for sure.

Our feature photo comes from Elizabeth Tuttle while out jogging this morning. 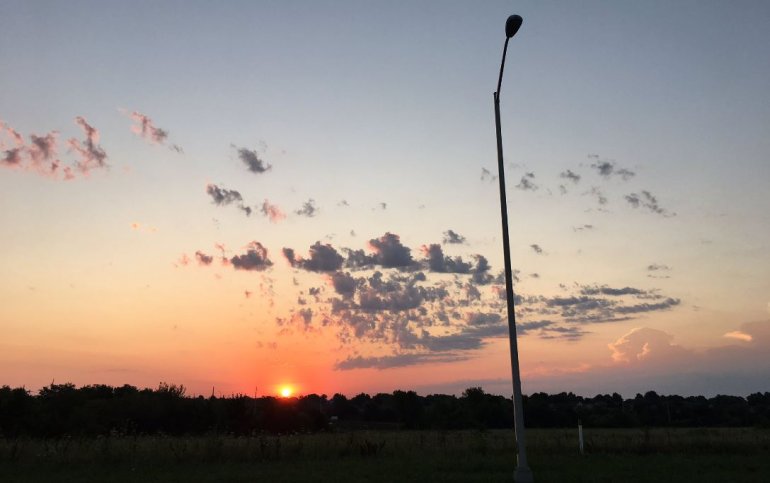 No blog on Saturday…so an update will be written on Sunday afternoon.