Good late morning…our storm that we’ve talked about for almost a week has formed and is intensifying quickly in the Plains states. It will create a lot of wind around here for the next 36 hours. This storm in a sense is the start of a VERY active weather pattern that will take us through the 20th or so. Another strong storm may be lining up in a bout a week or so for parts of the Plains. That will be watched because there are suggestions we may finally see a Canadian air contribution to the weather in the Plains 7-10 days from now…that would be a first for the season.

This afternoon (Updated at 2:30PM): The severe weather threat is ending for the immediate KC area…I’m VERY pleased with the blog/on air forecasts over the past several days. The threat of severe weather will continue towards north-central MO and central MO for the next few hours. The threat of even some rain in KC is not overly good either. Radar below tells the story. With that said a HIGH WIND Warning is now in effect for the region as we’re seeing gusts to near 50 MPH. This is resulting in some downed trees/power lines in scattered areas. The sun will shine for a few hours this afternoon. Temperatures now are in the 70s but will drop this evening…it’s now down to about 35° in Hill City, KS.

Tonight: Becoming cloudy again. Windy and colder with lows in the 30s by daybreak.

Tomorrow: Sunny, windy and seasonable with highs well into the 50s

Friday: Sunny with highs in the 50s

A Tornado Watch has been issued for parts of the area. KC is on the extreme southern fringe of this watch. It is in effect through 6PM…

It’s a classic November Plains storm. A strong area of low pressure has formed and is moving towards the ENE as I type this. It will strengthen (the pressure will continue to drop) through the day. Here is the 10AM surface map…can you spot the surface storm. Look for the turning of the wind barbs…ahead of the storm SW/S winds…behind the storm N/NW winds…here is another hint look to the west of KC…

So yeah at 10AM the surface storm was north of the I-70 corridor in far northern KS. In terms of the latest storm location…here is the pressure map which should auto update as the storm moves closer then away from the KC area.

At the surface…the drier air wrapping into the storm on the southwest side is zipping towards the state line. The dew points are crashing out to the west of the area…you can clearly see the storm sucking in the moisture and sucking in the dry air at the same time by looking at the dew points… 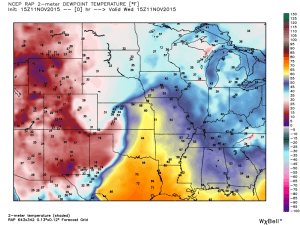 On the western side of the storm, it’s snowing right now.

Meanwhile in far NE CO…the winds are cranking and snow is falling in spots…via COTrip.org

So that is on the cold part of the storm…which will actually move more towards the NE and stay north of the KC area…it’s possible that there may be some snow in places like Grand Island and Omaha before the day/night is done.

For us in the KC area…my thoughts continue to to be the same. Radar is showing a few small showers starting to form as I type this on the KS side along and ahead of the dry line that will be surging through the area in the next few hours.

The regional radar shows the circulation of the storm with the precipitation rotating around the storm.

Many are wondering about severe weather chances…again to emphasize the better chances to me see to be up towards the IA border and towards the NE of KC. The SPC outlook has indeed trended farther and farther east and NE with the main areas of concern. Remember we wrote about this likelihood yesterday. Here is the late morning update. The KC area is now on the edge of the severe weather risk. You can clearly see however the area where things are somewhat more probable and that will be NE of the KC area.

The dynamics of the storm haven’t changed in terms of the forecast. Winds at the surface will be increasing while the winds above us will be zipping. They’re progged to be near 100 MPH above 10,000 feet which is extreme. So as the storms form closer to KC…these strong winds aloft may very well rip the updrafts away from the closer to the ground part of the storm. This is not an efficient way of getting severe weather in the KC area.

Should a storm further to the NE of KC be able to overcome this “ripping” effect…then that storm would be easily capable of producing some strong/severe gusty winds briefly as it moves towards the ENE or NE at close to 65 MPH.

Meanwhile additional rain is possible later Sunday into early Monday which may be followed by a stronger southern Plains storm that will be moving from the southern Rockies into the deep south. That is a long ways off but certainly something to watch for the additional threat of rain. The storm may be another dynamic one…so it too may create it’s own area of chilly air…that will be localized.

Something to watch…some weak suggestions of a bit of Canadian air dumping into the Plains later next week (at least on the EURO). Not sold on this prospect as of yet however.

So the bottom line…

Between 12-3PM there may be some fast moving showers/storms zipping through the area…rainfall amounts will be minor since the storms will be moving so darn fast.

In the afternoon skies should become sunny…

The main risk of sever storms will be N/NE of the KC area, especially across north-central MO and into NE MO and IA.