Good morning…a skiff of snow fell overnight…and once again the roads were rather slick in some areas…perhaps not widespread but enough to create problems this morning. Last night on FOX 4 News at 9/10 I was banging the drum on this potential as I was tracking snow across parts of N MO. I noticed up towards Maryville a solid dusting…with icy roads developing so I hit it at the beginning of every weather cast. I figured the snow may melt and then freeze up on the bridges and overpasses especially. Sure enough that happened. Since the roads weren’t really treated they were mostly on their own…and it got messy in some areas…with just barely any snow at all.

Today: Cloudy with a few flurries possible. Also the cold…the darn cold. Highs today only near 30°

Tonight: Cloudy and cold with lows in the mid 20s

Tuesday: Yup…cloudy and cold with highs around 30°

Wednesday: This should be the best day of the week with highs in the mid to upper 40s

I always say it always amazes me how so little snow can create so many issues…but there were quite a few accidents in the region earlier but things are improving as I type this blog this morning. I guess it really shouldn’t surprise me anymore. Maybe my memory is failing me but I just don’t remember these types of events 10 years ago…or whenever. I’m sure they happened just as frequently but it just seems strange to me I think. This morning was a perfect set-up though. Roads weren’t treated because the previous treatments washed off over the weekend…there was barely snow out there…it melted then froze…drivers weren’t ready for the change as it unfolded and were taken by surprise…and you get accidents.

There is a front to watch for later Wednesday night. As I mentioned yesterday there may be an attempt to get some moisture return into the region during the evening. This will be ahead of another cold front that will move through early Thursday with yet another dump of colder weather heading into the end of the week.

I’m still not sold on how much we get out of this…it will be fast and happen in early Thurday AM BUT even if it’s light and just dampens the road with the falling temperatures there again could be some slick areas Thursday morning. Something to monitor this week.

Then there is the weekend storm…timing is for Saturday and today the data still is indicating a southern track for whatever comes out of the Pacific and moves through the SW part of the country.

The storm in question is out in the Pacific…some 2500 miles from the KC area…as the crow flies.

It’s right there in the middle of the screen.

So by later Tuesday that storm will be off the coast…

Note as well the “U” dip moving through the upper Midwest…that’s the next injection of cold air that will be dumping through the Plains states at the end of the week.

From there things get a bit murkier. The data is pointing to an upper system passing too far south of KC to have a big impact on our weather…take a look at the comparison between the GFS and the EURO model. Slide the bar right for the GFS and left for the EURO…this is for Friday morning.

The effects from this are still showing more of a southern storm than a Plains storm. Look at the total rain Midnight FRI>Midnight SAT

and then Midnight SAT>Midnight SUN

You can see the trend…south.

Now this DOES NOT mean we’re totally out of the woods. It’s 5+ days away…there could be a northwards shift…and we could get into the northern fringe of this…and that would be all snow…and a high ratio type snow too with the cold air in place.

So that’s why I like to look at the ensemble runs, especially for a storm way out in the Pacific. Ensembles of a main run are alternate models being run with different initializations and physics within the model itself. So in the case of the EURO version. You’re getting some 50+ different runs…and then those are sort of averaged together to get a different solution. IF it’s close to the main run…it helps a bit with confidence..if farther apart it means to at least be “open” to the idea that something could work out differently. Here is a look at the EURO member runs that go into the ensemble 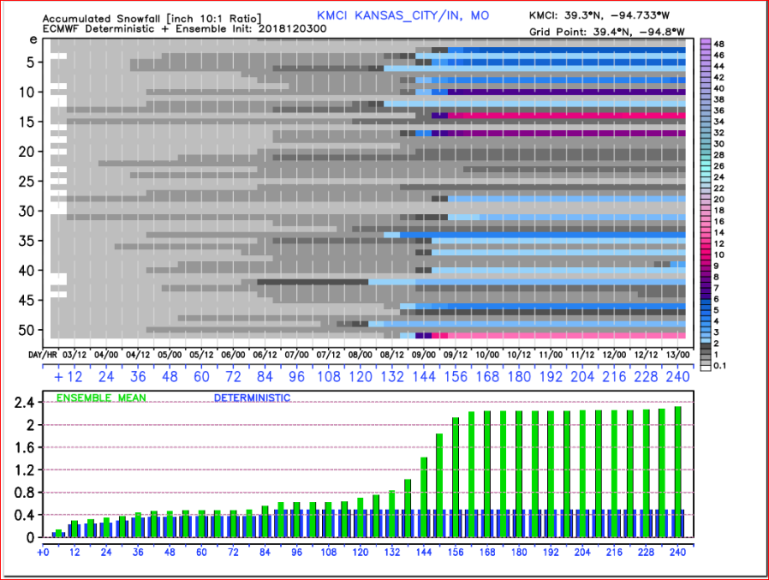 Note the difference in the blue bars below…that’s the typical EURO that weather folks like to look at. Note the GREEN bars…and the difference…that is the ensemble overage…hmmmm. About 5x’s more snow…and with the cold air in place…those numbers would be a bit higher too…maybe by 1″ overall. Another way of looking at this is by looking at the top part of the chart above…see all the light blue or blue bars…about 1/2 of the members show something a bit more impressive. Interesting…and the reason why I’m not in total discount mode at this point.

The blue numbers at the bottom are the times in hours. 24 is 6PM tonight…48 is 6PM tomorrow…etc.

Another way of looking at this is using probabilities…check out the chance of seeing 1″ or more of snow based on the data above. 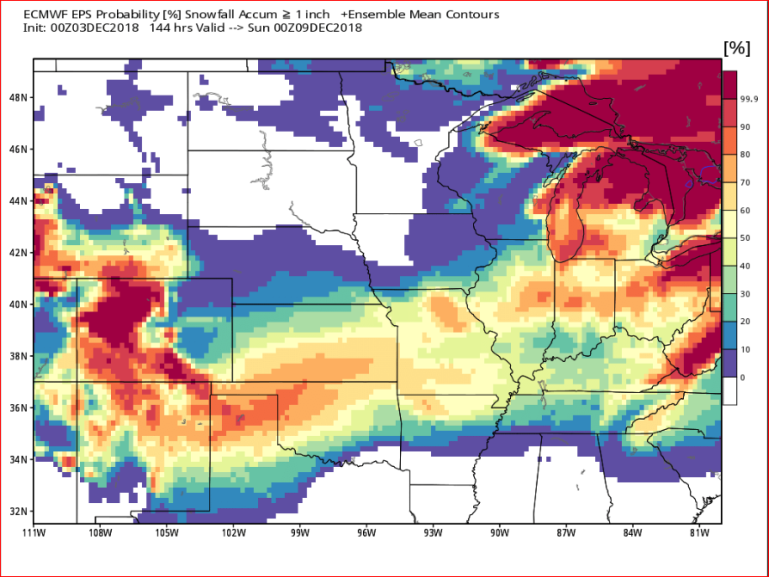 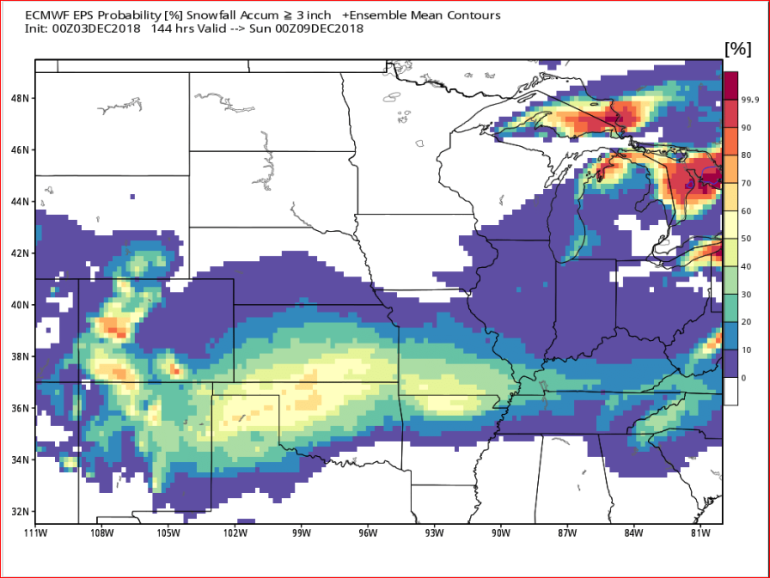 It’s worth monitoring…and watching for trends. 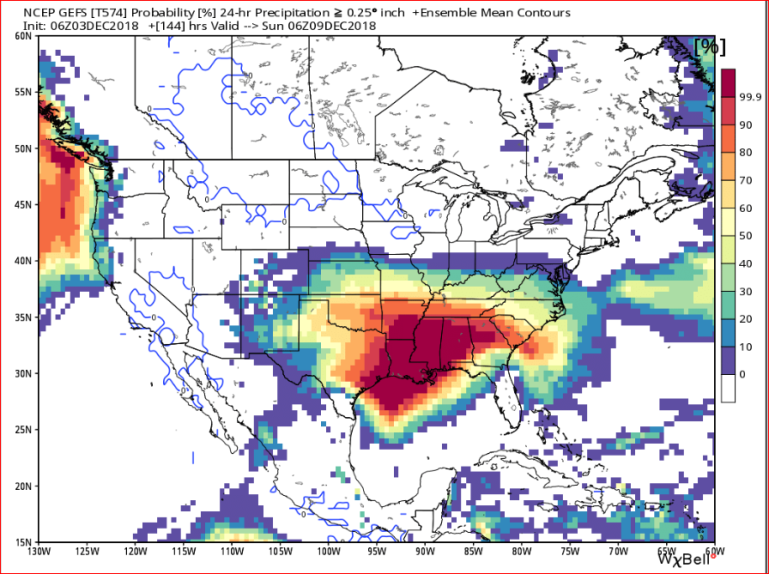 You can see the overarching thoughts of the model…with all the orange and red down towards Dixie…but there is a not insignificant 30-50% chance of 1/4″+ moisture towards the I-70 corridor. Again something to monitor and NOT discount at this point based on the GFS/EURO runs that most ONLY look at. There are bigger clues out there sometimes and that’s what I typically look for.

Our feature photo comes from Mary Yeatman up towards Smithville, MO 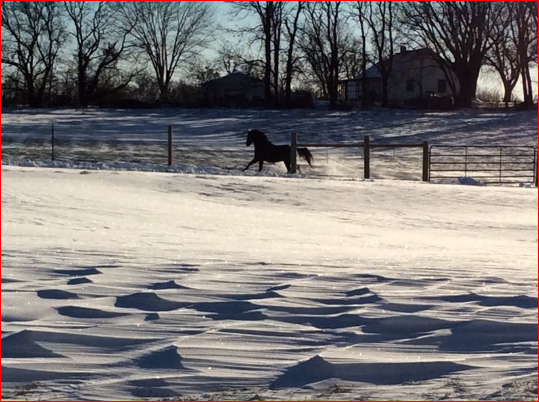