WINTER WEATHER FORECAST WILL BE ISSUED ON WEDNESDAY 11/25…

Good morning on this glorious and bright Thursday in the KC region. As is typical when you have a powerful storm sweep through the region the previous day, usually the following day or two the skies a bluer than usual. That’s because the winds circulating around the powerful storm, bit low to the ground and higher on up through the atmosphere have “cleansed” the atmosphere and as a result the air is clearer that it was before the storm. Pollution has been wiped away and with teh drier air in place so has a bunch of atmospheric moisture.

Today>Friday: Clear skies and sunny. Windy today again with gusts to 30 MPH…not as windy Friday. HIghs both days should be the 55-60° range. Lows tonight in the 30° range. Some areas may drop into the 20s.

Saturday: Sunny and milder with highs back into the 60s

Sunday: Increasing clouds, breezy and mild with highs in the 60s. Some showers are possible by Sunday evening/night.

Yesterday’s storm was a powerhouse for sure. The good news is that we didn’t deal with any severe weather (nor was it really even close) in the KC vicinity. The strong winds, with the thunderstorms that did form were across north central MO and out towards 65 highway in central MO. There were tornadoes (10) but they were in IA which was a rather significant update for the month of November up there. 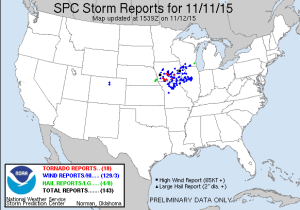 Overall the forecast of the severe weather couldn’t have been better in my opinion. This is exactly what I said would happen on Sunday and it played out to a tee on Wednesday…

The other facet of the storm was the strong non-thunderstorm winds that raked through the region. Wind gusts of 50-60 MPH were pretty common doing some tree damage and knocking down some power lines/poles in isolated spots. At one point about 20,000 customers were without power via KCP&L

Last night the NWS compiled a list of the strongest winds from the storms and not from the storms. The vast majority of the reports were NOT from thunderstorms… 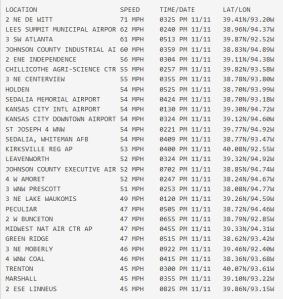 How's this for a wild day? The Des Moines Airport observations recorded a tornado & then light snow around 6 hours apart Wednesday. #iawx

With the Hawkeye state being closer and to the east (for awhile) of the surface low pressure area, they were primed for something like this to happen.

Meanwhile via @EarthCam a look at the wind storm from yesterday now in the Great Lakes (Grand Haven, MI) JL pic.twitter.com/nX7QCkJE7u

Check out the wave heights up there in Lake Michigan…

Another powerful storm is forecast to affect the weather locally early next week. This storm is now in the Gulf of Alaska and will take a familiar route through the SW US and then into the Plains (Southern Plains) this time it appears. This may end up creating a different weather story for us here in KC…including the potential of more rainfall.

Let’s use the GFS model for now…and go up to about 18,000 feet or so…you can track the progress of that storm. Look towards the NW park of the country…and you will see a sharp “U” shape. That is the storm that will move into the SW part of the US (MON>TUE) and potentially into the southern Plains states (TUE PM>THU)

Notice according to the GFS the storm stalls and wobbles around KS for about 24 hours…interesting as it may get cut off from the main flow across Canada.

The storm yesterday was strong enough to generate snow even though there really wasn’t any cold air dumping into the storm from Canada. The dynamics of the powerful storm were enough to “chill” the atmosphere down on the NWestern side of the storm.

With this next storm, the exact same thing could happen. Model data is doing the same thing in terms of the storms intensity. As the storm moves through the western US it will tug in some colder air from the NW Pacific region and some cold air from Canada (a little). It will also generate it’s own cold air as it moves towards the TX Panhandle through the western Plains states. The potential is increasing for a winter storm from Amarillo northwards into the western Plains states for TUE/WED of next week

At this point it appears we’re mostly going to be on the warmer side of this. Which means more rain initially…and perhaps some decent rain for a change (closer to KC) since the core of the storm, instead of passing through NE/IA, may instead pass closer to us or even come on top of the area. One thing to note…storms like this that are spinning like crazy have a tendency to spin the rain quite a distance from the storms core. So that with the storm close to KC in the upper levels of the atmosphere, in reality the precipitation is flung around the KC region and we don’t get as much moisture as what you may think with a system so close to the area.

This becomes more interesting some model guidance suggests that the cold air will wrap into and around the storm’s circulation and potentially wrap into the KC area (or nearby) by sometime Wednesday. That would raise the specter of a bowling ball type storm just spinning around the Plains and southern Plains for 24+ hours allowing the colder air in the atmosphere to rotate in from the west or even from the SW. Just how cold it will be remains to be seen. My feeling is that it won’t get cold enough to support snow in the KC area BUT it is something that will be watched because just above the surface it certainly will be getting colder and colder.

More on this storm in tomorrow’s blog. Certainly it’s an interesting pattern, and now a increasingly stormy one. It also shows a path in how we can get cold and yet not really have a pure Canadian cold air mass connection. This may be an important facet of the winter in the Plains…and especially in the southern Plains states…

On that subject…the winter weather forecast will be released on Wednesday 11/25 (night before Thanksgiving).

4 in custody following robbery, wrong-way crash involving police near I-70 and I-670 split in KCK