5PM Update: Mother Nature wins…outflow boundary finally lit up this afternoon on the south side and has created a line of storms from the WNW to the ESE. Areas from KC southwards have the best chance of seeing the storms that may produce some locally heavy rain in spots. Can’t promise the entire metro getting the rain though. Let’s see if these new storms can push out some rain cooled air to fire off additional storms.

Every so often the atmosphere becomes so disorganized, in a sense, that it becomes difficult for me to find a strong focus for better rain chances. This seems to be happening around the KC area as I type up this afternoon weather blog. There are various things happening, but it does seem like, for now, KC is just not situated well to take advantage of any one facet to give us some rain. It’s drying out now in the KC metro area after a steamy week. Other places are getting dry as well. N MO can use some dry weather however.

This is not unusual for August (summertime) here as the rainfall patterns typically do get more disorganized and chaotic in a way. We’ve just had so many rainy set-ups in the metro that it is something unusual You could’ve knocked me over with a feather yesterday PM with a decent to strong outflow/front in the metro and there were barely puffs of clouds. IN the end the cap that was supposed to weaken held strong enough too prevent any real vertical development of the clouds.

Tonight: Thunderstorms around this evening, especially from KC southwards. Radar below will tell the story better. Not all will get the rain however. Temperatures will drop perhaps into the 60s where the rain comes down the hardest.

Tomorrow: Mostly cloudy with about a 30% chance of some storms/showers for any one spot. Highs into the 80s however there is a way it could be a few degrees cooler on the south side (more in the discussion)

This is just one of the cases where I’m not confident enough to say it won’t rain, but my confidence that it will rain in the next 2 days is not really high anymore.

The latest satellite picture shows the clouds are thickening up in the region. The surface map shows various outflows pushing southwards. We’re still somewhat capped however it appears and things just look “a little off” in my fast analysis of the current situation. So I’m not hopeful of picking up widespread rainfall in the area for the rest of the day and into tonight.

Regional radar shows various areas of rain out there…

The one feature that has my attention right now is out in central KS. There appears to be a disturbance out there moving eastwards. Actually there are a couple of things put there, including another stronger disturbance in SW NE. So there are players on the table which should bring the area some rain but again something seems a little off to me. The wave in central KS may weaken, the rain in SE KS should stay south of KC and the disturbance in SW NE which should strengthen may be coming through the region at the wrong time to create widespread rain.

With so many things out there, I can’t totally rule out the rain through tomorrow, Thursday looks drier with all these features shifting east of KC and creating sinking air in the region allowing drier and warmer conditions to return.

The NAM model seems to be indicating this very thing…and granted with the mess the atmosphere seems to be in right now, no model will be able to portray the various features correctly right now. 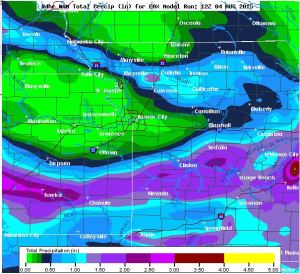 With all that said, I do think there should be somewhat more widespread rain between now and Sunday…the main thrust of serious heat will be in the southern Plains region. We won’t get into that which is probably a good thing. Look at the forecast for Oklahoma City over the next 10 days. This is from the GFS model which has a tendency to overheat the surface temperatures in these situations by 3-5° or so…but you still get the point. 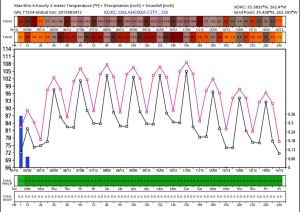 Dallas waited to late July (7/26) to get to 100° for the first time this summer…now may see a ton of 100s come down the pike into the middle of August. 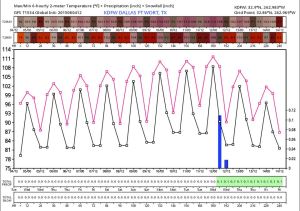 The NWS in Dallas sent out this graphic earlier in the day…describing what was coming for the southern Plains region.

So it appears we’re really just on the edge of several things this week. Hopefully something out there will reveal itself to bring the KC area some needed rainfall.